I would like to build my own fixed gear bike.

I want a steel frame, I know different quality of steel and I want to avoid HI-Ten.

I will be mostly for urban cycling (pavements) and I would take rougher paths from time to time. So I need wheels with at least 28mm large (so not a tight fork).

I live in Switzerland and looking on the Internet, I didn't find my frame. I never bought on AliExpress, I am afraid I will have bad surprise (counterfeit) while I was looking for this frame : 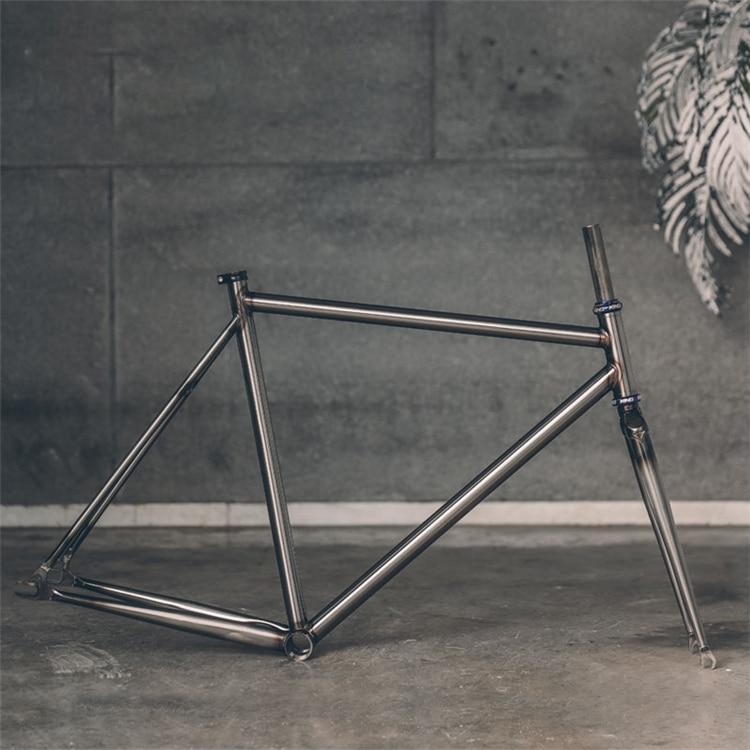 No, it is not serious, you should not believe these descriptions. They just try to attract people searching various terms.

There are indeed many counterfeits in these shops. When they claim so much different stuff at once it is quite certain.

That does not mean that the frame would not work, but if shopping in Asia it is better to shop from brands that do not pretend they are something else and sell under their own Asian brands.

Personally, I would suggest you look locally for a used bike for your project. You don't need a brand new bike and that bare-frame is not exactly cheap.

Also notice that you'll need to paint the bike properly - it looks like raw steel. A single coat with a rattle-can won't be enough - you'd want multiple primers, base coats, top coats, and clear coats. Or you could get the frame powder coated commercially.

There are no indications that the BB or head tube have been faced, which requires some fairly special tooling.

After that you need to buy every part of the bike. This could be an exceedingly expensive way to assemble a bike, and given you want fixed gear, you might not even like it.

Give this one a miss - there's too much confused, and remember there's no warranties. You could find yourself out for hundreds of euro with a useless frame.

I suggest you buy a complete bike that has been used, and just ride it. If you want to convert a geared bike into a single speed, there are kits to do this relatively cheaply, or you can replace just the rear wheel for a fixed gear solution.

Focusing on this part of the question:

My understanding is that in custom frames, it's not uncommon to mix tubesets. For example, a builder might choose different individual tubes from different manufacturers to get the mix of tubing diameters they want. Or some individual builders or factories might want to down-spec, say, the seat and chain stays to reduce costs. So, that bit by itself maybe should not raise alarms.

Otherwise, as already discussed, I would be wary of buying items consumer-direct from Ali Express. If the frame isn't as described, it may be difficult or impossible to address the issue. Even if the seller were honest, the return shipping might make it impractical. A lot of brands source their frames or components from mainland China or Taiwan, or contract with factories there to build their frames or components. The thing is, they would need to put in some work to find reliable partners. And they are usually in your country (or at least a major Western country like the US) and covered by your country's business and consumer protection laws. So, if any QC issues arose, you could at least deal with them in the same country and you often have both parties at least fluent in some common language like English.

There are some exceptions. There are several consumer-direct carbon rim manufacturers based in mainland China that I'd trust. I don't believe they sell on Ali Express, or at least not exclusively. Some wheelbuilders I interact with on internet forums have used their rims, and because they are able to inspect multiple items, I would trust their assessment of the rim quality (e.g. they can see how many rims arrive flat or out of round, they can make an overall assessment of how well the rim behaved during building, they can weigh the rims, they can report if they knew of any failures during riding, etc). I don't currently know of any individual framebuilders I'd trust, but some people are willing to buy carbon frames from the major open mould factories. You would need to be able and willing to do some research if you went this route. The bottom line is that if it's a party you don't know or you don't have attested reports about on Ali Express, which is a pretty anonymous distribution system, I'd hesitate to buy a frame sight unseen.

Added later to think specifically on the issue of counterfeit items: There are many ways to misrepresent a bicycle or component that don't necessarily involve counterfeiting the whole frame outright. If you Google, you will find several reports of counterfeit Pinarello frames - there are probably other frame models involved, but this one springs to mind, and these are frames from low-quality factories that either falsely have the Pinarello logo stamped on them. Cyclingtips recently had a story on fake Mavic carbon wheels. If you dig through the comments on this Cyclingtips feature of a custom steel frame, you'll find an exchange where the (otherwise very knowledgeable) owner gets asked by Ritchey to send in the seatpost, because it's fake. (The owner got it at a local bike swap meet.)

Alternatively, you may find some frames that do not have Pinarello logos, but that may be represented as coming from the same factory as Pinarello. These might be open mould frames - in industry parlance, that's when a factory creates several carbon frame designs, and sells them to buyers. This is totally legal and quite common. The buyers will apply their own branding to the bikes and handle quality control. An identical or similar process does apply to carbon and aluminum rims, as well as hubs. That's still misrepresentation.

I haven't heard of anyone buying steel frames from mainland China only for them to be misrepresented. The market for steel frames tends to be smaller than carbon. Originally, I wouldn't have thought that someone could bother to outright counterfeit steel tubes and try to swindle buyers, because the market is small and the profit margins would be smaller. However, a seller could represent the frame as containing, for example, 725 tubes, but instead they might use low-end tubes. An end user would not have the means to detect this. This mechanism of misrepresentation is probably more likely than you getting outright counterfeit steel tubes, but I guess anything is possible, because direct to consumer sales are kind of like the Wild West.

Speaking of which, I don't intend this post as a criticism of mainland China in particular. It's just that right now, this is where a lot of low-cost manufacturing is done. In different contexts, people of any nationality or ethnicity would do things like this - as evidenced by the United States origins of the phrase.

Not the answer you're looking for? Browse other questions tagged frames fixed-gear steel or ask your own question.