Cracking/Creaking noise when pedalling hard or standing on a pedal

So my 1 month old bike started making a creaking/cracking noise when I pedal hard or stand on a pedal. For example if I only pedal hard on one side and just let the other side spin its fine but as soon as i paddle with both sides it creaks on every stroke.

Since I'm short on tools I've only tried new pedals, taking of the cranks and put them back on with grease, took the chain of and just stood on one pedal then switched to the other one and the noise still appeared. Took out of seat post and checked every bolt/axle/quick release on the bike except the BB. It seems to be a sealed shimano cartridge so is there a way to "fix" it, do I buy a new one since while I'm already at it or can it be something else?

From what I can tell its threaded, looks similar to this one: 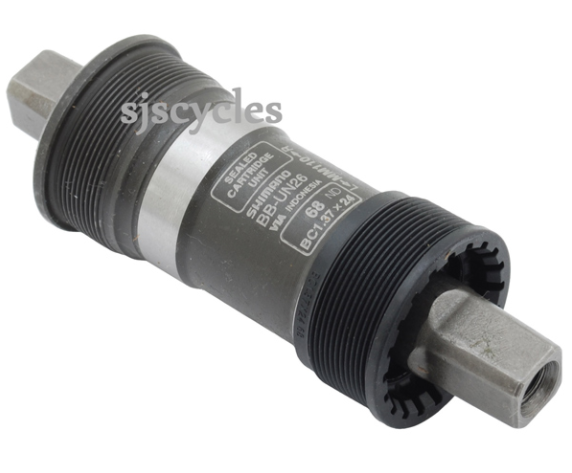 Where did you buy it? I'm guessing that your local bike store, unless they were the place where you purchased it, probably has little if any interest in working on the bike, unless you are willing to pay a good amount.

I looked at the specs on this bike and the crank/bottom bracket is not precisely described. Pictures would be helpful, but if the bottom bracket has cups that attach it-- the manufacturer only seems to sell that kind-- my guess would be, you need to remove the cups, put some anti-seize compound on the threads, and torque them down properly.

I had a creak like this on my bike, which was assembled in Taiwan, and upon disassembly, found the BB cups were barely lubricated with a minuscule amount of some all-purpose grease. I put in a proper amount of anti-seize compound, reassembled to spec, and all was well, no more creak.

There can be a number of creak sources. Let me share my example.

I bought a bike with 28-spoke wheels. (Normally, I would not purchase a bike with anything less than 36 spokes per wheel, but unfortunately it has become hard to find bicycles with reasonable spoke count.)

Needless to say, the wheels lost spoke tension after riding a while. The front wheel lost all of its tension on all spokes, and the rear wheel only partially lost tension.

My solution for this was two-fold:

The "solution" of the bike shop was to put thread glue into every spoke nipple, and to slightly tighten the spokes. After I got the bike back, I rode it for 700 km or so with the "fixed" wheels before building my own wheelset. Upon carefully inspecting the "fixed" wheels, spoke tension on the average was low, wildly fluctuating (so not equivalent on every spoke) and it appeared what kept the spoke nipples from unscrewing was the thread glue.

The spokes on the "fixed" wheelset didn't unscrew anymore due to the thread glue, but a different problem developed on the rear wheel. When riding hard uphill, there was a mysterious creak. I originally assumed the creak would come from a bent rear wheel axle, but now I assume the creak actually came from the spokes, some of which still had inadequate tension.

My replacement rear wheel that I myself built with DT Swiss TK 540 rim, DT Swiss Alpine III spokes, DT Swiss Pro Head brass nipples, and Shimano FH-R7070 hub, did not suffer from the problem at all. Obviously I did not use any thread glue, put enough tension on all spokes, ensured the spoke tensions were equal, stress relieved the wheel carefully in addition to ensuring the wheel is true.

Of course it's theoretically possible that the original rear wheel having a cheap non-Shimano "Formula" hub could have something broken, but I believe it is a plausible theory that the rear wheel spokes are creaking when riding uphill.

Not the answer you're looking for? Browse other questions tagged noise creak or ask your own question.