Help identifying bike model and worth

I am fairly new to working with bikes, and I have this vintage Nishiki Meridian bike, with a Cunningham design. I have tried searching online for this specific bike model but I cannot find much.

I am looking into restoring it. However, I do not know its worth and if it is worth it to restore it instead of buying a new bike.

It is rideable, the gear shifting is wonky so I would have to fix/replace that. I would also need to take it apart and clean every bit of it, and most likely completely replace the breaks as they are old.

Any help would be much appreciated in estimating if it is worth it to restore it or just to buy a new bike. 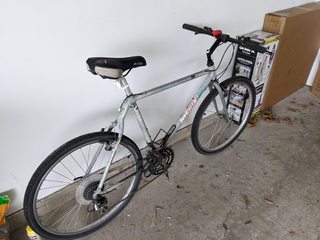 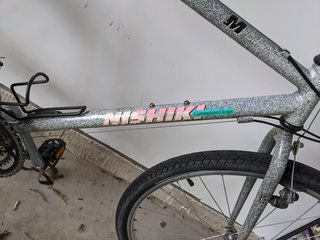 That's an awesome bike - would be called a MTB back in the day, but now we'd call it a rigid MTB.

You probably have to replace the brake pads (the rubber blocks, 4 in total) because they go hard with age/ozone/UV and don't brake as well. That style of brake is called a cantilever and while less-common now, they can still work perfectly well when tweaked correctly. If you did replace the brakes, then your options are more canti's, or V brakes. It may take long-reach caliper brakes, but those generally have lower performance than your existing ones. You cannot have effective safe disk brakes on that bike as-is.

Gears - they likely need a clean, lubricate, and then adjust the cable tension. I see friction shifters on your handlebars, which may feel vague compared to modern trigger shifters. However there's nothing wrong with them.

The cassette appears to be a 7 speed, so it could be a cassette or a freewheel. If you wanted, it could potentially go to 8/9/10 speed, but that would need a new wheel, rear derailleur, cassette, chain, and right-hand shifter.

There's nothing wrong with leaving the front mech as a friction shifter if the rear was updated.

If the tyres show cracks or perishing, then you might want to consider new tyres. For normal street riding, aim to get less~no tread blocks which will allow you to go faster. If the current tubes hold air fine, then just ride it and get some wear out of the existing tyres, and delay spending on replacements for now. The current tyres are relatively street-oriented.

Finally - I really like that paint job. Its a great looking bike and sure beats walking. And since you can't get anything else right now, any bike is better than no-bike.

If your Nishiki Meridian:

then it is worth getting into riding condition - especially if you do the work yourself.
Air the tires, do a safety check, and ride it around enough to get a feel for how it rides. If you like it then it's worth fixing. If you don't like it someone else will.

Build quality
Yours is a durable Taiwan made frame with solid middle of the line components that were made to be durable and function well.

Your bike was made between 1989 and 2001
According to Wikipedia

From 1989 through 2001, Derby International marketed bikes in the United States under the Nishiki as well as Univega and Raleigh brand names. Some of the all terrain bikes and mountain bike models were designed in partnership with famed mountain bike designer and Mountain Bike Hall of Fame member R. Cunningham and have his name on the frames. These Nishiki models, though manufactured outside Japan (e.g., in Taiwan, by Giant Bicycles and possibly in Italy by Colnago, Olmo or Viner) often carried the name Nashiki and some of the same model names as had been used on the Kuwahara-built bicycles.[7] The brand name Nishiki was retired by Derby in 2001 in North America.[8] As of 2010, Nishiki-branded bicycles, manufactured by Accell Group were available for sale again in the U.S. at Dick's Sporting Goods. Dick's had obtained licensing rights to the Nishiki Bike brand in the U.S.

Not the answer you're looking for? Browse other questions tagged vintage hybrid-bike restoration or ask your own question.

3
Should I restore my old mt-bike for winter commuting (and for wife to ride with me) or throw it away?
3
Help to find the history of my 1900's Armstrong cycle :)
1
Restoring Aluminum Cranks
0
Restoration and upgrading old bike
8
Judging a bicycle show
1
Shimano 105 RD-5501 on a six speed freewheel?
6
Steel vintage bike restoration and modification, troubleshooting help
0
should i replace the tires/tubes to sell vintage bicycle?
1
Need help to identify a bmx
4
Replace vintage bottom bracket nut