Sheldon Brown's site suggests that QR skewers should be installed with the levers on the left side of the bike, "so the derailer [sic] doesn't interfere with it" and that "Usually, the lever for the front wheel also is on the left side, but some Bike Friday travel bicycles fold more easily if the handle is on the right side".

If I don't have any problems with the QR lever hitting the derailleur, is there any other downside to installing QR levers on the right side of the bike (drive side)? 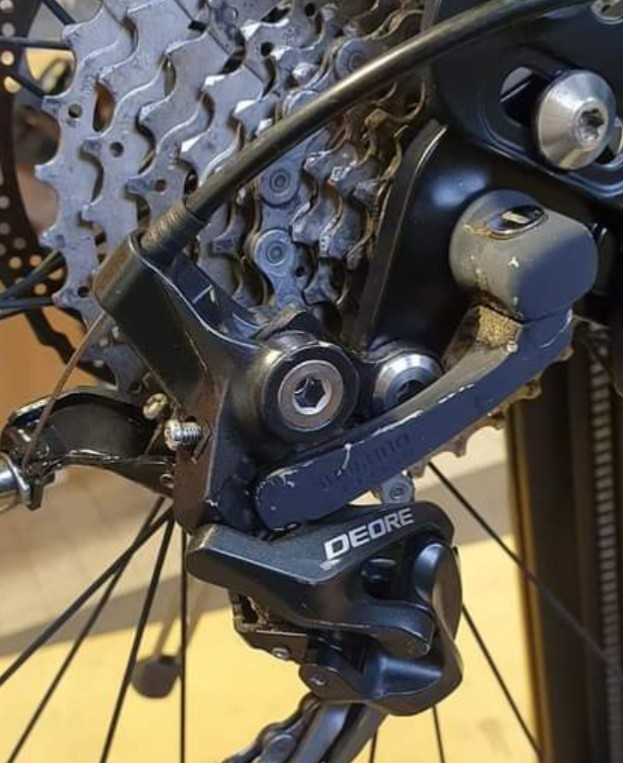 This is one reason why we keep them on the left.

No, there is no functional downside in the sorts of cases you're talking about, given that you can find a good resting angle for the lever.

The world is in flux on the decorum versus functionality aspects of this issue. You can see this most clearly in how major manufacturers have diverged in which side of their thru-axle forks to put the threads on over the past few years.

Designs where the cam lever is offset from the axle, such as most internal cam QRs, often are tricky to get positioned well on the drive side, without it sticking off into space too much. Running it sticking off into space introduces hypothetical risks of it getting bonked open accidentally that would need to be weighed against the hypothetical risks of the issues you mention of having it on the rotor side. Designs where the lever is centered over the axle usually make it easier to find a good path on the drive side, i.e. pointed between the chainstay and seatstay.

Non-mechanical users can have trouble in the best circumstances finding a resting angle for their QRs that allows it to fully close instead of bottoming against the frame/fork. Introducing other obstacles to that isn't good because the safety considerations are more potentially real when done wrong, and probably in practice trump any other considerations. It's for this reason I never put the rear QR lever on the drive side as a working mechanic. But I do put the tool interface side of non-QR skewers on the drive side of disc bikes if I'm making that choice, because then there's no downside.

Given the above issues with drive-siding the rear, whether to non-rotor-side the front is usually really a choice about whether you're going to let a bike out with mismatched lever sidedness. This is of course a weird looking break in decorum to anyone who hasn't thought about all this. My answer here is it's technically better if you can get a resting angle you like on the lever, which is most of the time, but I spend enough time being the sad freak taken technically driven stands about other corner case issues in wrenching that I can't bring myself to get too invested in this one, which is what I would be doing if I had the skewers all funny on every other bike I touched. Such goes cultural change, which is really what's in question with front skewer sidedness.

In the back on thru-axle bikes, having it on the left provides the advantage that you can put the threads in the hanger. That consideration probably wins against all others there, so the question going forward as it relates to thru axles is whether manufactuerers are willing to make forks opposite in pursuit of the slight practical edge at the cost of adherence to decorum. I've been surprised to see any have answered yes to that, but they have, so who knows where we're going.

Another reason to have the front QR lever on the left is if you have a dynamo hub. The wiring comes out on the right, and the connector/wiring would get in the way of the lever (or perhaps more likely your hand operating the lever) on many designs at many angles.

Cycling has a lot to do with traditions. So, traditionally on rim-brake bikes, and as intended by its inventor Tullio Campagnolo*, the QR levers sits on the left side of the bike, with the front one as near as possible behind the left leg of the fork, leaving just enough grip for easy opening. The rear lever bisects the angle of the seat-stay and the lower stay.

With the advent of disc brakes and before thru-axles, the front QR was allowed to migrate to the right side as to prevent painful contact to a hot front disk. For symmetry reasons the rear QR could also move to the right side but most of the time it remained on the left, mainly to avoid touching the chain when removing the wheel.

*However, Campagnolo's first-ever shifter system -Cambio Corsa- had the rear QR plus the second lever that moved the rear axle on the right seat stay, close to the rear brake. (Most cyclists were right-handed and the chain sits on the right side, obviously.)

This may not be a full answer per se, but was too long for a comment and I feel it is worth noting.

As for functionality Nathan has covered that quite well above as he often does :P

Some may remember in 2015 there was recall pertaining to quick release skewers and disc brakes that included nearly 1.5 million bicycles going all the way back to 1998. The issue specifically was because the QR could open more than 180° which allowed it to come into contact with the disc brake causing it to jam the wheel quite quickly which is obviously bad. There were injuries associated with and spurring the recall.

...The recall affects a class of quick release skewers across several brands that supplied them to the bike makers. Because of that, and the range—affected models were sold as far back as 1998

Me personally, I always put the QR to the opposite side of disc brakes. The chance of this happening is probably quite slim, but the recall shows that it is indeed possible.

An interesting point of comparison is to look at thru-axle bikes. All TA forks I've seen have the lever on the right side (DS), while every TA frame I've seen has the lever on the left side (NDS). Obviously, with a TA, you can't change whether the handle is on the left or right, so manufacturers had to have made a decision regarding their placement at some point.

The cassette/derailleur is a dirty area of the bike. By putting the QR lever on the left side, the cam part is cleaner, and you're less-able to try and close it with a blob of road grime in the mechanism.

For the fork it really makes no difference - both sides are equally dirty.

Depending on the length of the QR lever, it may be possible for the tip to catch into your disk rotor, which will result in a clicking noise and then an immediate full wheel lockup and potential rapid stop.

If that happened on the front wheel it would be an immediate endo and somersault down the road. If it was the rear wheel, you might do a long straight skid and stop, but any turning would result in a low-sider slide. If you're turning/leaning right the rotor is on the upper side of the bike, and the lever could lean down into the rotor compared to a left turn where the rotor is above.

To achieve this, you'd have to be riding with a QR so loose that it can flop around under its own momentum, AND have a lever long enough to reach into the rotor's own spokes.

By putting the front QR lever on the right hand side, you're eliminating the possible full flip. For the rear, I'd replace the QR with a shorter-handled one.

Disc brake bicycle should not use quick release. Quick release has been designed to withstand only forces that rim brake hubs encounter in their use. Disc brake discs are a fraction of the diameter of the wheel, so the force needed for any kind of reasonable braking is multiple times the weight of the cyclist. The disc brake reaction force tries to push the left end of the axle away from the fork dropouts. Normally, around 20% of the rider's and bike's weight is on the left front axle end, and when braking with rim brakes, around 50% of the rider's and bike's weight is there. Not only that, but with rim brakes the force always pushes the axle into the dropout, not out of the dropout. In these circumstances with disc brakes, if the quick release is even slightly loose, the fork will jump out of the axle and with no front wheel attachment anymore, you will fall.

With rim brakes, I don't think the orientation of the QR skewer matters much. Put it in the way you prefer.

Not the answer you're looking for? Browse other questions tagged wheels disc-brake axle disc-wheel or ask your own question.

26
In which orientation should a front wheel be installed?
5
How do I get rid of weird rubbing noise on my cx bike?
6
Replacing Quick Release skewer with through bolt axle
0
How to tighten a Fox Thru Axle, Cam Lever/QR Skewer?
1
Subtle click on left Shimano 4700 STI brake lever when applying brake while moving forward
8
Skewer removal without quick release
14
Front disc brake wobbling / grinding on pads after full braking and minor plunge
4
Replacing rear solid axle with skewer
5
Converter for quick release skewer to thru axle