Can my belt drive frame be converted to a derailleur setup?

I want to know whether my frame is compatible with any kind of derailleur hanger, as I want to install standard gears. Due to my Nexus 8 speed hub being really quite uncomfortable and faulty since getting the bike (it gradually got worse).

I can just invest into a Rohloff hub and all will be well, but that's a big chunk of money for me. I'd prefer to switch (if I can) to a simple derailleur system, which I can easily maintain too.

See this link for my exact bike, it's possible to zoom in on the rear dropout too, as below:

I know there's no direct fixture for a hanger, but are there alternative ways to fit hangers onto frames like this? 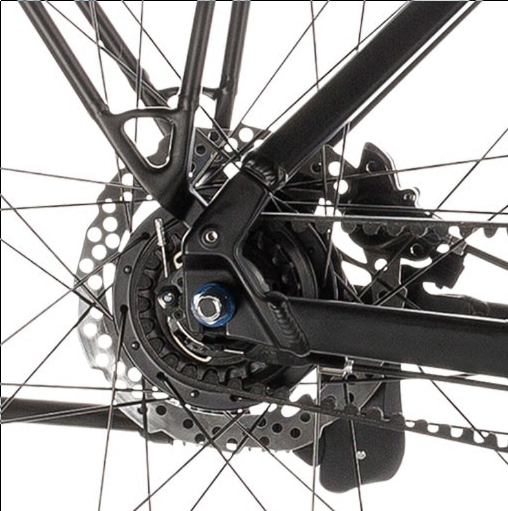 There is no good way. One could imagine ways of contriving a low-end claw-type derailleur on. Don't do that.

Nexus hubs are usually reliable. In some places in the world, there are lot running around without issue. That you've had chronic issues suggests either damage, defect, or a setup issue.

Some number of Nexus and Alfine bikes have made it into the world with mismatched cassette joints and shifters from the factory. It is a maddening problem until you've figured it out.

There are steps between what you have now and Rohloff, if it came to replacing the hub. I recommend taking it to a shop that really knows internal hubs. They are robust but have their quirks and unique procedures and things to check.

I've never tried them, but some suppliers such as Wheels offer an emergency hanger which is held in place by the clamping of the quick release. while such a solution may allow you to attach any modern derailleur to your bike, it would not be easy to live with, as removing and reinstalling the rear wheel would become an ordeal. Also, the shifting on many systems may suffer from the derailleur mount being further outboard than intended.

I'm not sure whether this relates to your hub's specific problem, but aside from the cassette joint issue Nathan mentioned (and I will note there is a dedicated cassette joint for belt drives), Shimano internal gear hubs can suffer as a result of excessive belt tension, and some manufacturers have shipped Alfine bikes with belt tensions too high from the factory. The correct tension for a single speed belt drive may be too high for an Alfine hub. Most of the belt-drive related posts on the S-Tec forum relate clicking in Alfine hubs to too high tension.

Consider this post from a Shimano product manager 7 years ago:

Current 8 speed hubs use roller clutches instead of pawls so they should be silent when pedaling forward. We hear this complaint a good amount when our hubs are used with belt drives. The heart of the issue seems to be that internally geared hubs like to have relatively low chain/belt tension and that belts need to be at relatively high tension to stay on. You may need to fine tune the belt tension a little differently than you generally would in order to make sure that you are at the very low end of the acceptable tension range recommended by Gates.

We've also seen issues with noise coming from the belt drive cog moving on the driver unit of the hub. It may be worthwhile to add a little grease to the cog/driver unit interface.

In these cases it can also be helpful to reach out to the companies that make the cog and belt (they may both be Gates but anyone could be making the cog).

While the Shimano recommendation seems to be to set the belt drive at the low end of the drive manufacturer's prescribed range, Alee Denham of CyclingAbout makes the case for running even lower belt tension on the basis of improved efficiency:

That said, if you use a particularly stiff frame, you can lower the belt tension below the recommendation. You didn’t hear this from me, but I’ve been slowly reducing the belt tension on my KOGA slowly over the last year, and frankly, it’s getting ridiculous. My belt can now touch my chainstay, it’s so far beyond the minimum that I can’t even measure it – and I’m a very strong rider, with a heavy load, riding up incredibly steep mountain roads.

At my approximate belt tension, and at the power outputs I push, my belt is likely running the same or lower friction than a chain. I only recommend trying this with a belt snubber fitted, which will make sure the belt stays on, even if the belt tries to skip.

Yes, you can, you just need to buy a derailleur hanger (for an example check this old answer) and then measure all the various components to get the correct chain line (it may involves changing the bottom bracket). My opinion: you have a frame ready to accept a belt, it is a waste to use it for a chain-nased drivetrain. You are probably better off by selling the current setup and buying a chain-based bicycle.

Answer to a question you didn't pose:

What you describe seems a specific issue with that very specific hub. I think the easiest is to change the rear hub: you have an unlucky one, a newer one would do wonder.

I really think the issue you have is specific to your hub, specifically your hub with serial number xyxyxyxy, not with the specific model of hub you have (or with the brand in general).

Disclaimer: I do not work for Shimano, I suggest swapping the hub with any hub, you mention Rolhoff but it is not the only alternative manufacturer ...

Your bike has a belt drive. That cannot run a derailleur setup at all - you would have to rebuild the bike with a chain.

That means buying a chainring, rear wheel, cassette, chain, derailleur, shifter, and cabling. This would be expensive.

Looking at the almost vertical dropout, there is no space to fit a claw hanger - it would force the axle down a bit and potentially out the bottom, risking the axle moving under load.

Hanger would end up angled backward too far which would make the rear mech angle backward too, which will reduce chain engagement on teeth of cogs.

Not the answer you're looking for? Browse other questions tagged derailleur internally-geared-hub belt-drive derailleur-hanger or ask your own question.

9
How to mount a derailleur hanger on this frame?