Recently I had an accident on my bike, and my front brake 11-speed, front brake GRX 600 shifter isn’t braking well anymore.

The shifter took a bit of damage in the fall. Initially it didn’t shift, and I had to bend the edge of the lever arm (under the “X” of the GRX logo) outwards to stop it fouling on the inner shift lever. Shifting is fine now 🥳, but there are problems with the hydraulic brake. 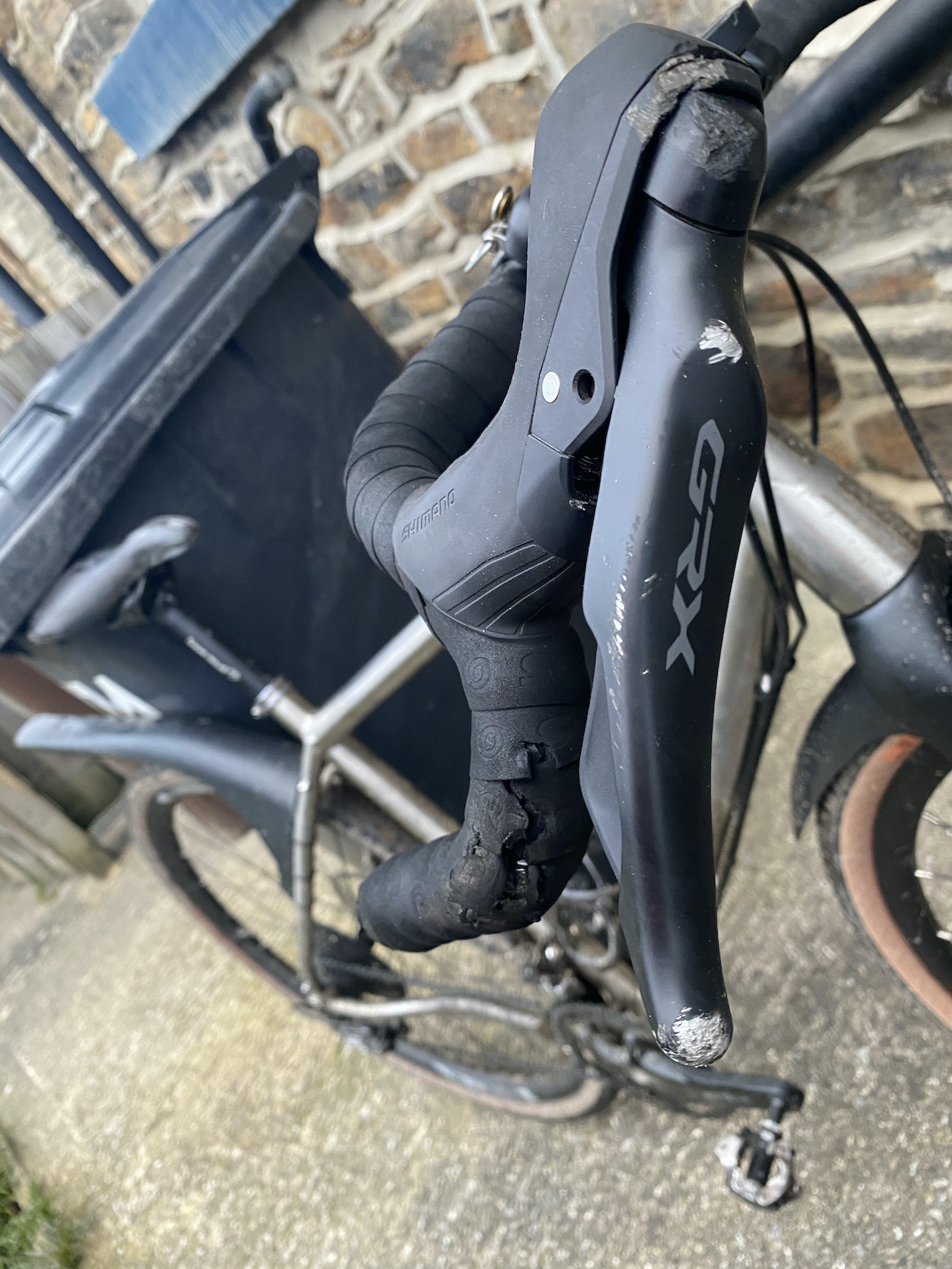 The brake seemed fine. Pulling the lever it feels firm and brakes confidently. The problem is that the brake power fades and the longer you pull the lever the more it pulls in to the handlebar. Over a fairly short descent the lever can be pulled past the bar and the pads aren’t pressing on the disc anymore. Releasing the lever and squeezing again gives another firm/confident brake, which then eases off again.

My first thought was that this is a bleeding issue, so I picked up a bleed kit and gave it a go. This didn’t solve the problem, so I went through the bleed process again, to no avail.

There’s a good chance I’ve just failed to bleed it correctly. The handlebars are ridiculously aggressive gravel bars, so rotating the shifter to the correct position to “burp” it was a challenge. Also, I noticed a few tiny bubbles in the syringe of mineral oil (it was new).

Do the symptoms above sound like a bleed issue, or something else? All the advice I’ve found on the internet about air in the system and bleeding seems to suggest braking will be spongy but “pump up”. That’s not what I’m experiencing.

It’s seems impossible to get hold of Shimano GRX components at the moment, so I’m really keen to fix this even if it just holds me over until it can be replaced.

The symptoms you are describing seems to be a "Ghost Leak" - Rides of Japan terms it this way. It might actually just be a kink in the hydraulic hose.

His symptoms are similar. Squeezing the brake feels powerful, but holding on to it will eventually cause the hydraulic pressure to release. Once he lets go of the brake lever, and squeeze it again, he can feel the power again.

Definitely recommend you checking out Rides of Japan's recent video on this, it's quite in-depth as he shows why it happens.

In short, over a period of time, the points where the hydraulic hoses get kinked will wear out over time. Especially if there are accessories like handlebar bags there actually slightly re-route the hoses' entry into the frame/cable guide. As the hoses are under pressure from the hydraulic fluids, eventually the inner lining will disintegrate, causing a kink.

In your case, could it be that the hoses actually got hit in the accident? It might be ideal to replace the hoses too! If really there's a kink in the hose, it won't be apparent from the outside too.

Rides of Japan is quite thorough for this issue (for a home-mechanic at least), it's easy to understand from his documentation! Hopefully, this is the correct approach to your issue, good luck!

P.S. I mentioned Rides of Japan like 3 times, but damn it his videos are binge-able!

I experienced the same issue. What I found was the pistons don't extend and retract equally. Over time one pad wears more than the other which creates uneven spacing between the pads and rotor. Recenter the pads so the gap is equal. Also found the GRX brakes don't self-adjust so I insert a feeler gage that is thinner than the rotor and pump the levers to reduce the gap. Perform both actions and the issue goes away (until next time)

Not the answer you're looking for? Browse other questions tagged shimano repair hydraulic-disc-brake brake-levers or ask your own question.