When there is tension on front cable, rear will not make it to largest cog, and has trouble downshifting.

EDIT: Just removed and reinstalled cables again, this time using two extra pieces of cable housing to attempt to keep the cables organized while routing. Removed the extra housing once the cables were through. Re-assembled....issue is still present.

NEW UPDATE: Still trying to figure out how increasing tension of the FD (when shifting to big ring) decreases cable tension on the RD. So that when the chain is on the big ring up front, the rear will not shift to the largest cog. Leading theory is there is something amiss with the cable routing as proposed by @Nathan Knutson. Here are some pics. Does anyone see anything suspicious? Missing parts?

MORE RECENT UPDATE: Checked chain sizing (in light of a comment below), using the method of bypassing the rear derailleur and wrapping the chain around the largest cog and the large chain ring. The chain appears to be the correct length.

Is it possible that the cables or routing is a red herring, and my issues is somewhere else, like the rear derailleur itself? ...though hard for me to believe because it shifts correctly when in the small chain ring up front. 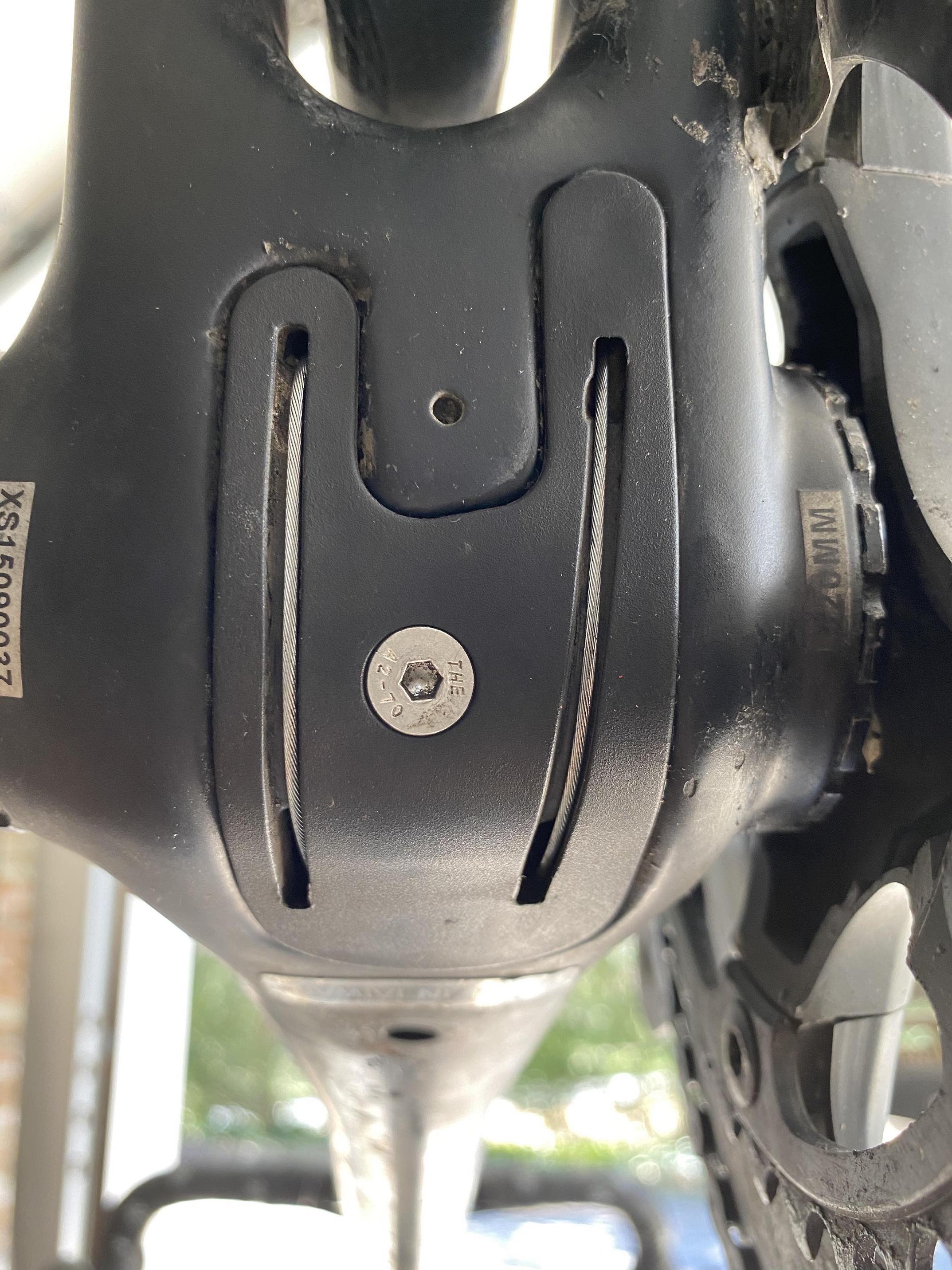 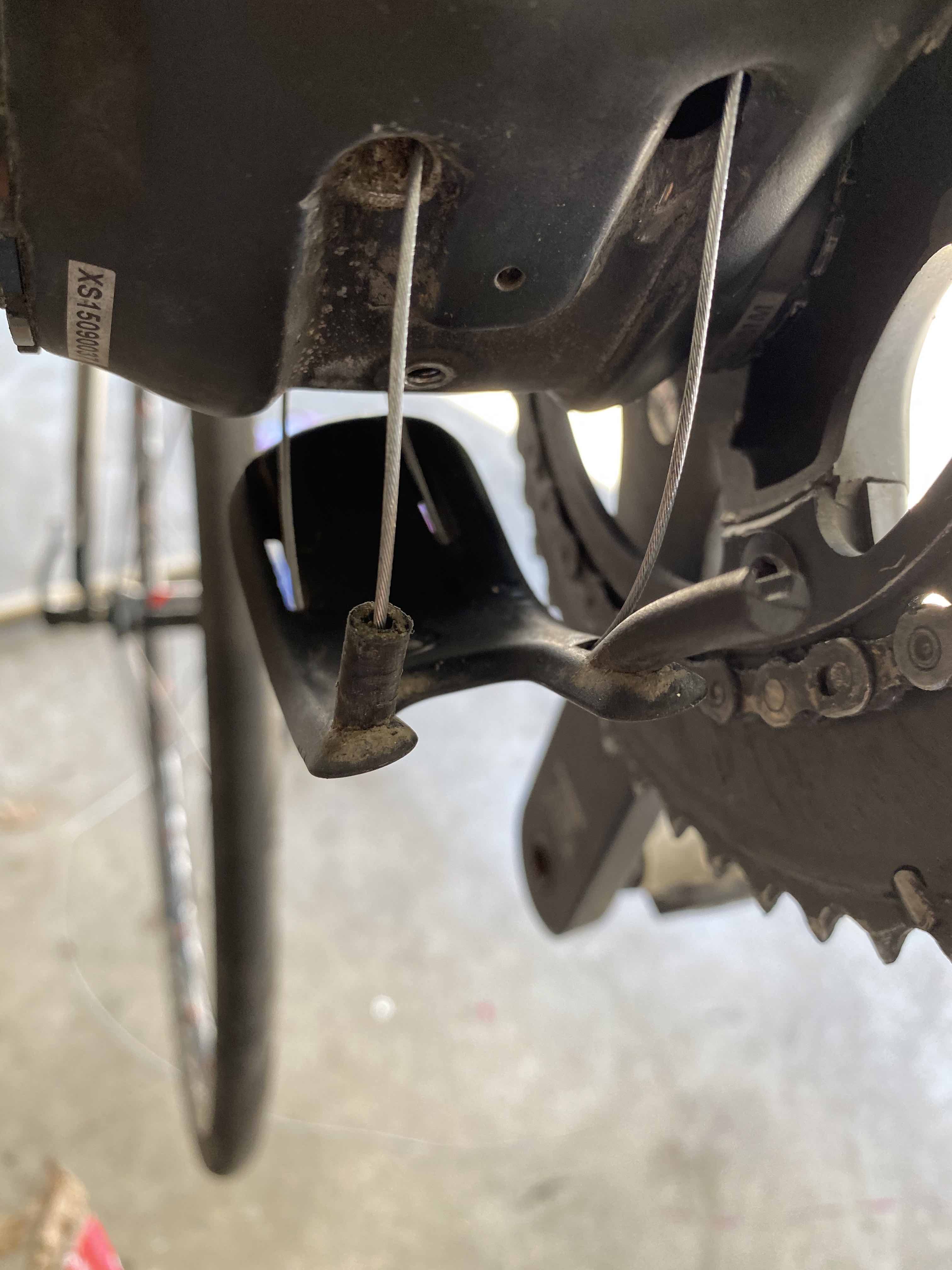 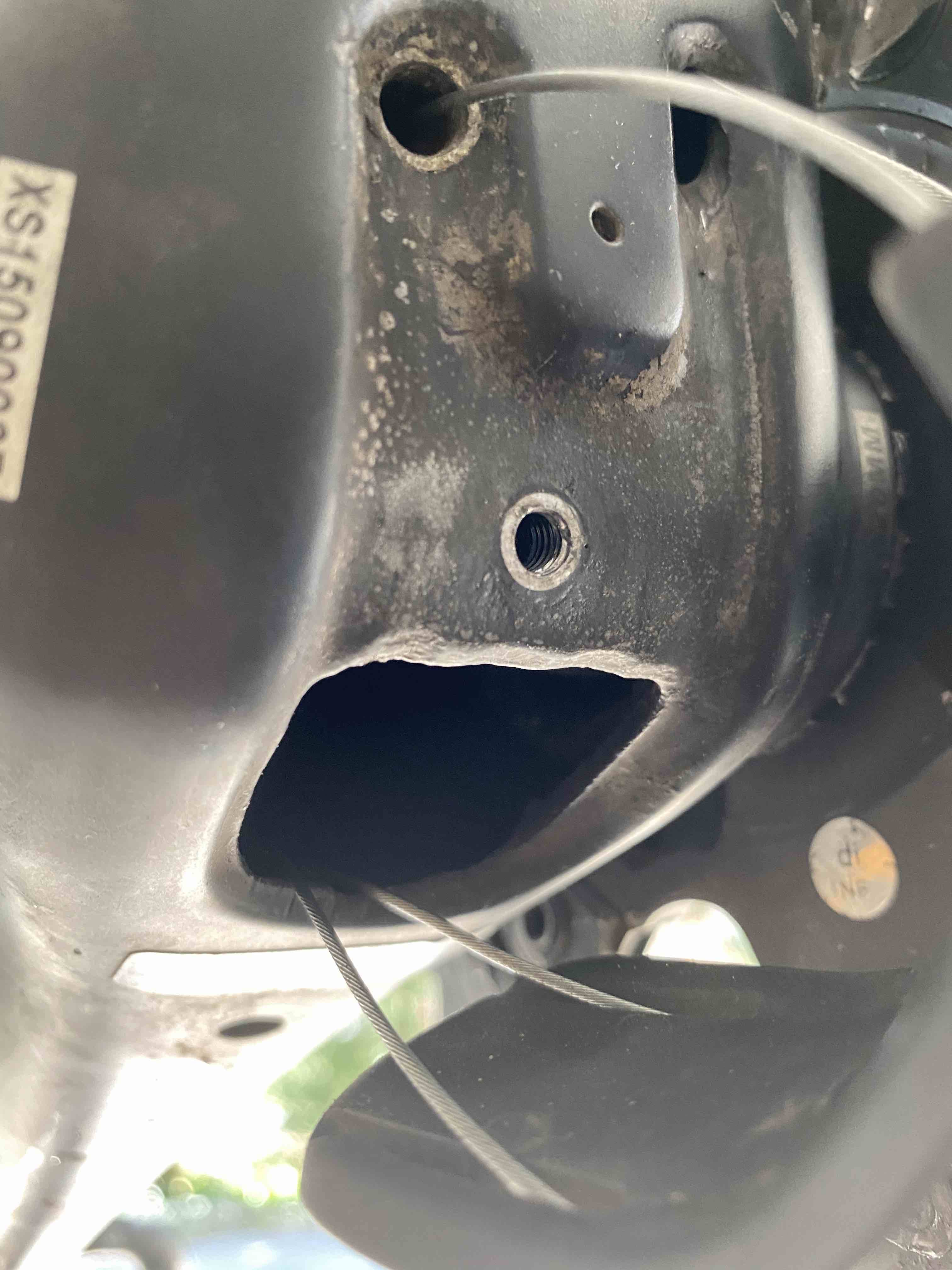 I looked at some pictures of the bike.

The thing that fits most of your symptoms is that when the FD cable is under tension, it does something to the alignment of the guide plate that the cables are wrapping around, pulling it closer in against the frame such that the RD cable suddenly has tension relieved from it and therefore can't make it up to the big cog, and downshifts with more hesitation.

That you say the problem also exists when the FD cable is disconnected completely is curious, because it's a little like saying the problem happens when there's tension on the cable and also when there's not. Maybe that also misaligns or destabilizes the guide somehow.

Barring other options, I would pull the cranks and BB and see what you're working with in there. It's possible something has happend that has caused the guide to not be supported properly. You may be able to feel it happening by putting a finger against the plate while the other hand shifts the front.

Another thing to look at would be if you adjust the RD to be at the right tension with the FD in the big ring, does it have the opposite problem in the other direction? It seems like it probably would, but it's worth checking.

The other possibility I can imagine is that it has to do with the internal crossing. Usually one would assume this symptom wouldn't be caused that way, because one cable becoming straighter under tension could contort another cable crossing it in a way that increases tension to that other cable, but decreasing the tension is hard to see. But, perhaps they're crossing each other near the contact point with the guide plate in a way where it makes that possible. If you can reverse which cable is crossing over the top, it's possible that could fix it or you could at least learn more. Also, most frames like this can have the housings set up to not cross the head tube, and thus have no internal crossing, but it will come at the cost of much less clean housing lines up front and likely more housing rub on the frame.

Finally...after letting this go for a while (and dealing with many miles of poor shifting!), I had an idea. (Isn't it funny how problem solving sometimes works.) I began to consider the distance of the RD from the cassette. I was messing with the B-tension screw, and couldn't get my RD close enough to the cassette.

Unmentioned earlier, is that I did re-assemble the bike after some work done on the frame...anyway...

I think the problem is solved...please check my work/theory...am I crazy or did this do the trick?

It occurred to me that the cable housing that runs from the frame to the RD might be too short, and actually impeding the RD from getting as close as necessary to the cassette.

I replaced it with a longer housing...everything seems to be back to normal.

Did I get lucky? ...could a RD that is too far away from the cassette cause the initial problem?

Not the answer you're looking for? Browse other questions tagged shifting cable-routing or ask your own question.

0
gears overshifting issue
2
Why can my rear derailer no longer shift between all 8 gears?
1
What could be preventing my bicycle from shifting gears?
1
Rear derailer/chain skipping/shifting issues
3
No trim and can't shift into small chainring
1
Why are my Shimano 105 11-speed shifter/derailleur acting like they're 10-speed?
2
Stiff Shifting Levers
2
All gears are going one over to the right
0
Rear derailleur does not shift onto sprockets 2 and 6