Why are trigger shifters so widely used, instead of the twisting grip shifters(revoshift)?

I recently rebuilt my whole bike. It was in terrible condition. I also decided to get a new freewheel with more speeds. While i was doing some research and looking through shifters and freewheels, i found out that the twisting grip shifters were limited to only 6 and 7 speeds. I couldn't find any twisting shifter with more than 7 speeds. I personally find them so comfortable, convenient, easy and way faster to shift than the common trigger shifters. I finally decided to get rid of the old 6 speed freewheel and install a brand new 7 speed freewheel with a huge low gear for crawling. Why are trigger shifters so widely used? I don't see any advantage.

Update: Many people said that twisting grip get stiff over time and are difficult to twist. Yes they get a bit stiff over time, but from my experience they still aren't hard to twist at all

Below image of twisting grip shifter 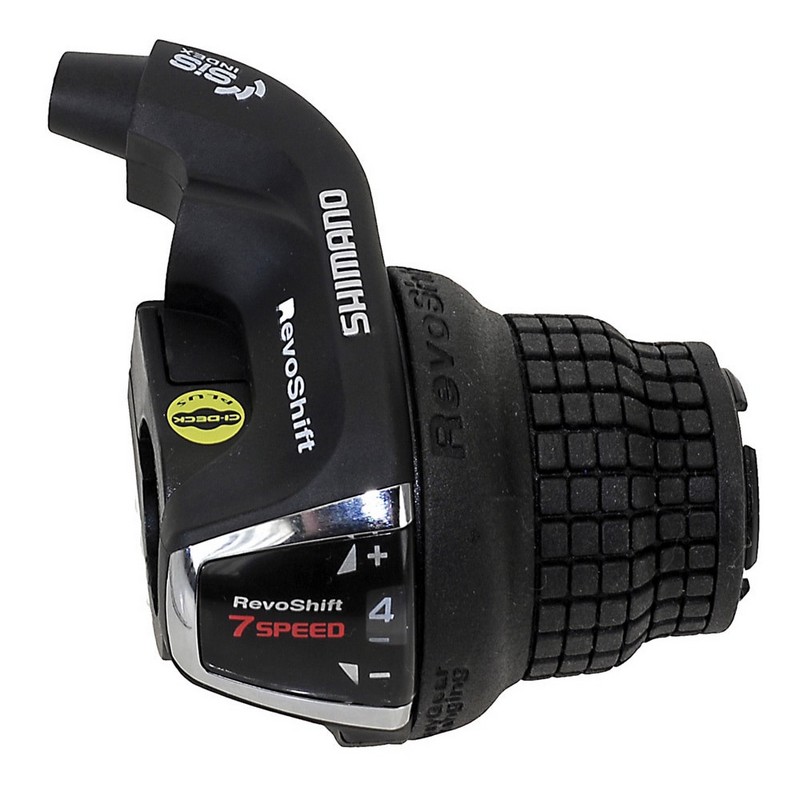 In the context of a high-end MTB designed to go quickly over difficult terrain, trigger shifters have the following advantages:

Modern grip shifters do exist, Sram makes a wide range of those, and in my experience, the cheapest option (the GX model) is very reliable and performs very well. For completeness sake, grip shifters have the following advantages:

I've owned/looked after a few bikes with twist shifters. They've always become stiff to the point of being hard to shift at all after a few years, even with new cables, and they're a pain to strip down compared to trigger shifters. I have successfully de- and re-greased some ancient SIS trigger shifters to good-as-new condition but never did so well with revoshift. Even before the deterioration one (paired with a 7-speed megarange cassette and appropriate derailleur from new) struggled to get into the big sprocket: it needed considerable grip strength to do so. For some bizarre reason they put them on kids' bikes. I guess they're fairly intuitive, but the grip required is often too great.

The friction shifter for the front triple is much better than the indexed revoshift (or the cheap clone I still have in my garage on a bike that's waiting for a new back wheel).

The exception seems to be the rental bikes round here that use 3-speed Nexus hub gear with a grip shifter. That works fairly well, though it twists the opposite way to the last one I had, which still confuses me sometimes.

I've had twist shifters on a couple of bikes, and I prefer trigger shifters because I like to keep the skin on my fingers - too often I would have to grip them tight when adding tension to the cable, and would almost get proto-blisters in my purlicue. They also mean that I'm effectively letting go of control of that side of the handlebar, as my hand is controlling the twisting of the shifter and it's difficult to apply much steering control while doing that twisting motion, again mainly when adding tension to the cable; with trigger shifters I can brake with both hands, change gear with both hands, while still having enough purchase on the handlebars to steer.

As a famous marketer once said, there are more cockroaches than humans. So there are more trigger shifters than twisting grips. In fact, two of the most expensive shifting systems, Pinion and Rolhoff, both uses twist shifters (as far as I know, there were some experimental trigger shifters being developed and funded on Kickstarter for Pinion).

You do not see any advantage in trigger shifter vs twist shifter, but you are not on the mass-selling side, you are just an individual with a bicycle :D !

I ran Gripshift Shifters back in the mid 90's for 5 years. I had previously had STI Thumb Shifters.

Pros for me were:

Maintenance was easy, not that they ever needed it, they were indestructible. I never had any problems with them stiffening up.

I have a lot of love for Gripshift, I have no idea if they still exist but I would definitely have them again.

Why are trigger shifters so widely used?

I don't see any advantage

I don't see any disadvantage.

Trigger shifters are very cheap and easy to use. They can be used during a harsh winter when you have so thick gloves on that your effective finger size is multiplied by a factor of 2-3 as thick gloves don't make operation difficult. They aren't (usually) coupled to the brake lever so you can choose your brake lever and shifter separately. They allow you to downshift multiple gears at a time. They probably work more reliably on a slightly out-of-adjustment drivetrain as downshifting involves a small amount of "overshifting" and then releasing the overshifted cable to fall back to its rest position. In contrast, grip shifters don't overshift. Thus, they are more likely to function less well on a drivetrain and cable system that's a bit out of adjustment: perhaps the rear derailleur hanger isn't straight, perhaps the rear derailleur bushings have worn, perhaps the cable has more friction than when new, perhaps the bottom bracket cable guide is full of dirt, etc.

Not the answer you're looking for? Browse other questions tagged shimano shifter freewheel grip-shifter or ask your own question.

4
change derailleur and shifter in an old road bike reconverted to hybrid
1
Is Sram PG850 cassette a substitute for Shimano TZ31 freewheel?
8
Is changing wheel necessary to use a freewheel with different number of gears?
1
Incrediably stiff rear downshifts
2
Can I add a gear to my Tourney 14-34T freewheel
10
My bike goes up one gear at a time, but down two: is this normal?
1
Upgrading Shimano Tiagra shifters
0
Front derailleur twist shifter replacement - from small to big ring in one click
1
NuVinci continuous shifter
0
Can I go from MTB shifters to road shifters?