I have the Shimano Deore SL-M590 9-speed shifter, bought new and used for about 3 years. On my ride today, the upshift lever got permanently stuck forcing me to complete my ride in the lowest gear. I took the covers off and removed the cable, but it is still stuck. It is well lubricated.

Is the mechanism repairable? Is it worth disassembling it any further, or should I just buy a replacement? I can spend an hour fixing it, but a longer repair is not worth the time for me.

BTW, which other Shimano models are compatible with SL-M590? I don't care about 2 steps upshifting (Rapidfire?), in fact I would rather not have it. My setup at the rear is 9-speed Deore-XT with RD-M760 derailleur and CS-M760 cassette, I think. 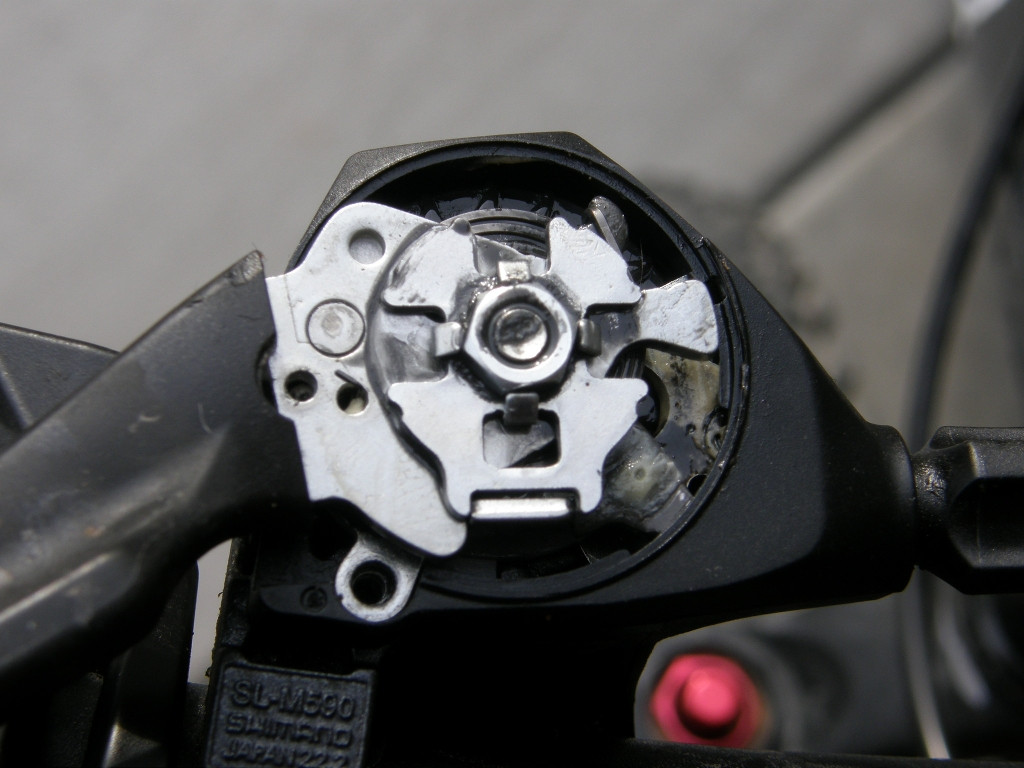 The M590's are awesome shifters. Like all trigger shifters, the factory grease can become hardened and contaminated over time leading to frozen pawls--little levers that move the internal cog by fitting in the tooth grooves of the cog and act to either move the cog which winds both the inner cable and a spring. Another pawl, engages a groove holding the cog in place after a shift is complete. When you use the B lever--the top one that releases spring tension and causes a shift from larger to smaller sprockets-- this pawl moves out of the groove allowing spring tension to unwind the cog and thereby the inner cable. So, free movement of these pawls is necessary for good shifting. It is in these areas around the pawls where old grease firms up and eventually restricts the movement of a pawl enough so that the shift stops working either partially or completely.

The fix is ample amounts of WD40 or similar degreasing spray flushing the innards of the shifter. After cleaning and drying the excess fluid, a light grease can be reapplied to the workings of the shifter. I myself use TriFlow aerosol as lubricant and will regularly squirt some into the shifter while working the levers to keep things lubed and clean and free moving. Lithium spray grease is helpful in this maintenance too.

If the inner cable is stuck, it obviously needs to be freed. There is a plastic screw on the shifters lever side that covers the access hole the inner cable goes through, and where the seat for the end of the cable resides. The end of the cable can only be accessed and freed from it's seat when the shifter has released all spring tension and the cable seat lines up with the access hole. The shifter must be in the highest gear--the position where all spring tension is released and where the derailleur would have the chain on the smallest cog or chainwheel. Attempt to get into this position by activating the B-lever several times. It is helpful to put some tension on the inner cable by pulling gently the cable while working the B lever. Essentially you're mimicking the derailleur spring tension. When the shifter is in the high gear (rear) or low gear (front) the seat for the inner cable is in line with the access hole and the cable can be pushed out of the seat and drawn out through the access hole. Sometimes there is a bit of plastic whose job it is to secure the cable end in it's seat. This will have to be manipulated out of the way so the cable end can move out of it's seat and be removed.

With your shifter apart the pawls can be seen well and their movement assessed. You must be careful not to dislodge either end of the coil spring. I also would not attempt to loosen the center bolt as all those little pieces can come apart. It's a POA to refit them properly. When you're ready to insert a new cable, have the shifter back together except for the access cover screw and the shifter in the state of fully released spring tension. You can then start feeding the end of the cable through until it's end is seated in the shifter.

Other model numbers of 9 speed shifters very similar to the M590 include SL-M530, SL-M510, SL-M750. The M590 is the newest, higher level 9 speed shifter (Deore level). The Alivo and Acera groups are now 9 speed and have shifters that will work as well. These are newer than the M590 but not yet at that level (IMHO) despite the trickle down of technology Shimano utilizes that makes the performance of today's lower tier components on par with yesterday's higher tier offerings.

Not the answer you're looking for? Browse other questions tagged shimano repair shifter or ask your own question.