Following up on the same bike as my previous question, we were able to get it cleaned up an running very well at the end of last summer.

My brother has been riding it for a few months now and the main issue is that the SunTour friction shifter for the rear derailleur doesn't hold tension and frequently shifts to the smaller cogs on its own.

I bought a set of SunTour LePree downtube shifters to replace the shifter that's currently on the bike.

I plan on installing a clamp with shift bosses like:

However, there are no cable stops on the bike. The housing has been clamped like below and the shifter housing runs right up to the current shifter.

The new shifter doesn't have a cable housing stop and so I'm considering using a clamp-on cable stop on the downtube closer to the bottom bracket. 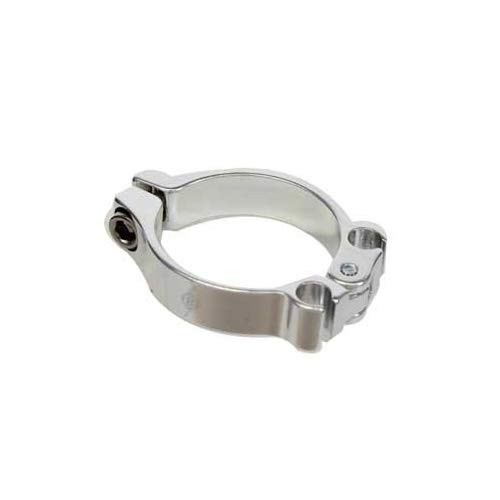 Am I on the right track or is there a better way?

For downtube shifters, I prefer to run as little housing as possible. Your best bet is to look for some new old stock (NOS) vintage parts. You need two bits: a chainstay-clamping housing stop for the short housing loop to the rear derailleur, and a downtube-clamping cable guide for making the cable bend at the bottom bracket up towards the front derailleur and back towards the rear derailleur along the chainstay.

A quick search of eBay shows both available pretty readily. Several manufacturers make the chainstay clamp, but the Campagnolo 636 is representative. The best downtube clamp for both a front and rear derailleur looks to be the Campagnolo 626/A double guide, though Huret, Suntour and a few others also made them.

Not the answer you're looking for? Browse other questions tagged downtube-shifter or ask your own question.