Can't figure out the origin of loud screeching noise

I've had my bike for over 1 year. Since the day I bought it it's had this problem where it makes a really loud screeching noise coming somewhere from the back. I didn't notice it at the store because it comes and goes. It started shortly after I bought it and I brought it back to the store and asked about it. They said it was caused by the paint on the rims and it would disappear with wear. It's been one year, the rims are somewhat worn, and it's as loud as ever. In fact the front rim makes less noise and is much less worn. The front rim also makes some noise but a lot less than the back. If anything the back noise seems to be getting worse.

I know someone who bought the same model and she's never had this problem.

I've tried loosening the bolts on the back wheel, makes no difference.

It's not because of lack of oil, or excess. I found some oil had gotten into the back rim and I scrubbed it thoroughly with alcohol. The noise got even worse.

It's not the brakes because it doesn't make any difference whether they are new or worn out. Loosening or tightening the brakes makes no difference. I've tried with 2 different models (the first the same as the one on the front), no difference.

Pedaling or not doesn't make any difference. This sound only happens when I brake, otherwise the bike works normally. The brakes work well, except for this issue.

Three things that make a difference:

The sound gets worse if I ride through puddles and the rims get wet. Gets better when they dry.

My weight. I weigh ~55kgs, it's a medium size bike so there shouldn't be a problem. Although, if I run alongside my bike and hit the brakes, no noise. At all. I tried the same thing but I pressed down on the seat with my hand when I braked. There was some noise, but not much.

Another thing that made some difference was flour. Yes, I put some flour on the back rim just try it. Reduces the noise a bit, but not much. I read that scrubbing it a bit with sand paper could help, I want to try that. Would dirt help? Possibly, but even though I go on a lot of dusty trail rides not much dirt gets on the rim. 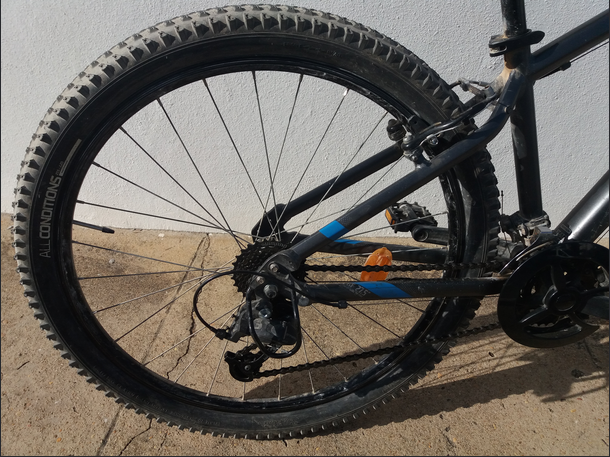 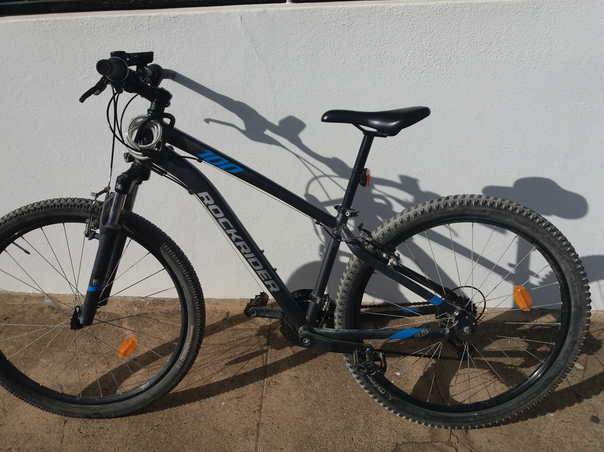 Can anyone help me figure out the problem? If all else fails I will just buy new rims.

EDIT: I think I have figured out what it is. I've followed this video:

and I've been able to eliminate the noise almost completely. I will try it again tomorrow when I have more time.

You are describing brake squeal caused by the brake pads resonating on the rim during braking. Wet rims often squeal worse than dry ones and the flour use reduced the friction somewhat which reduced the ability to resonate as well as diminishing brake effectiveness. There is a way to alleviate much of the braking noise with the technique of "toeing" in the brake pads very slightly so that the front of the pad contacts the rim first and then the rest of the pad closes further. This helps prevent resonating which is the cause of the noise. A rubber band wrapped around the trailing edge of each pad will provide ample toe in when the loosened pad, brought into contact with the rim by activating the brake lever, is then tightened down with the pads fixing bolt. A business card placed between the trailing half of a brake pad and the rim is an alternate method of setting the toe in.

Additional actions that can be taken are cleaning the braking surface of the rim with alcohol and a scouring pad to remove oils and other contamination that can add to the tendency of the system to resonate. At the brake pad, use sand paper to rough up and clean the braking surface of the pads. Pads develop a hard glaze with age and the heat from braking which can contribute to noisy braking. Sandpaper removes the glazing exposing softer rubber below. The roughened surface of the pads contributes to the friction potential which can change the ability of the pad to resonate on the rim. Utilizing a softer compound pad can be of use as well. Kool Stop is a popular, quality brand of brake pads that many bikers swear by. One can acquire brake pads that have a longer contact patch on the rim--the pads are essentially longer which effects the resonation potential as well.

Park Tool has an excellent instructional video on linear pull, "V-brakes," such as yours, and includes the toe-in technique described above.

Not the answer you're looking for? Browse other questions tagged repair noise brake-noise or ask your own question.

5
Brakes periodically make "finger nails on chalk board" sound
10
Crate of beer as cargo
5
How to stop handlebar from creaking
3
Noisy rear derailleur (Shimano RD-5800)
5
What may be the cause of a loud noise when riding?
2
Loud cracking/creaking sound only when cycling uphill
1
What causes the different types of tire skidding noises?
1
Unidentified clicking sound coming from front wheel area when performing an endo
1
V-Brakes squeal very loud when braking