Got this used di2 equipped bike with what seemed to be just a spongy front brake. Bleeding as per manual. Still "mushy". Emptied the line and disconnected the hose. The lever just don't return all the way back on its own. Removed the lever from the bars and can't see any obvious problems. It just moves half way back after being pressed normally and slows down in the second half of the travel. Then stops at about 1mm from the proper position. And I can push it to return. Pressing it quickly a few times makes it snappy again for a few returns and then it slows again.

My guesses went from cylinder, to dirt, to di2 cable stuck between the springs or the springs mounted incorrectly but just impossible to understand what's going on inside without removing the lever. And I'd rather not just dump a degreaser or wd-40 into a di2 brifter...

Any clues or similar experiences?

Update: took it to another LBS and the owner said he has "a friend that works for Shimano" so I left it there ATM for the "friend" to check.

The range of travel where it's having trouble sounds an awful lot like the same range of travel that makes up the difference between the minimum and maximum free stroke setting. I haven't seen this issue and my understanding of how the free stroke mechanism on these works isn't perfect, but the first thing I would look at is whether the free stroke hardware seems to be in order and how it responds to that adjustment. 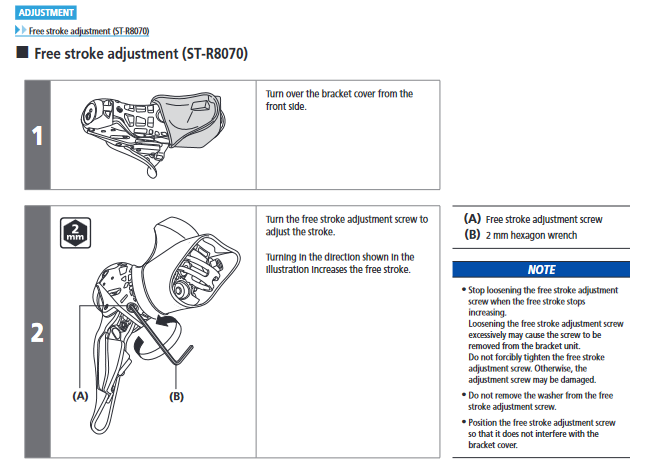 So the part is more than 2 years old and not covered by the warranty. But an LBS took them to "a friend that works for shimano" who "changed the gaskets" (cit. from italian) which I suppose is the seals of the piston in the brifter that got damaged or displaced somehow. A pity can't know for sure what it was but visually there are no changes in the springs and di2 cable routing.

Not the answer you're looking for? Browse other questions tagged hydraulic-disc-brake brifters di2 or ask your own question.