Conditional clicking from back wheel

This drives me nuts for months, I cannot figure out where the clicking sound comes from.

Only comes out after driving uphill, and not on the largest back gear, also not on smallest! Only happens when I pedal with force, not when just follow slowly or backpedal. The funny part that it settles down after I backpedal! (thus it cannot be spokes/wheel) I don't see any dirt in the back derailleur, it has all teeth, but sounds like some consistent metal hitting metal.

I can only feel it via the frame not through the chain. Chain is well lubed, no stiff links, super silent normally. Back wheel and gear set is only ~6months old. Gear set is screw type not cassette. Shifting is perfect. I tried to isolate the spokes so don't mind the paper.

It does seem to be in time with your pedalling. If this is the case in any gear, then it would indicate the issue is in the pedals, crank, bottom bracket area.

Check it isn't the front derailleur cable clicking on the right hand crank... rule out the easy one first! The mudguard too, anything that could be rubbing that shouldn't.

Then you would check the pedals, crankset and bottom bracket one by one. If you can swap out the pedals then you can isolate them and see if the problem goes away. Then check the crank bolts are tight and that the chainring bolts are too. Then if not solved you can pull the bottom bracket and inspect it for play in the bearings, replacing it if necessary.

btw, can't see in the video resolution but it almost looks like the front derailleur is incomplete? might want that replacing sometime. If that indicates the condition of the bike (poor) then the bottom bracket could well be worn out and be a strong contender for the noise. 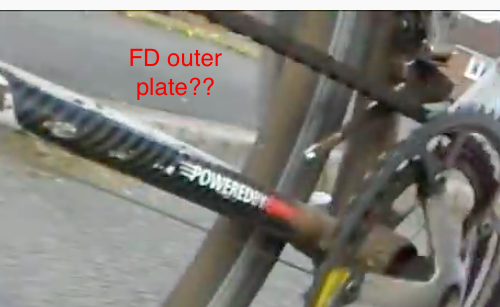 I used to have, not a click, but a creak, from the rear wheel.

The background of the problem was that I bought an e-road-bike. Because decent e-road-bikes were not available with 36-spoke wheels, I had to purchase a bike having 28-spoke wheels. I thought that because the rear wheel is the most likely wheel to have issues and because the frame was an asymmetric frame (Cannondale AI), 28 spokes might be just enough (normally I prefer 36).

They were not. The front wheel suffered a complete and total loss of spoke tension (probably due to 28 spokes being inadequate for braking loads) and the rear wheel also had few spokes with lost tension.

I asked the bike shop where I bought the bike from to solve the issue. Their "solution" was that they put thread glue into each nipple, gluing it in place (thus making it probably impossible to re-adjust spoke tensions after the glue has dried), and tensioned each spoke to a varying not-so-high tension. Thus, I can by plucking the spokes to see that their tension is neither high nor equal.

The thread glue did in fact prevent subsequent tension loss but the rear wheel creaks when I pedal with great force uphill.

I decided that those wheels will never be good and built a wheelset with 36 spokes each (triple butted 2.34mm/1.8mm/2.0mm), a rim with double eyelets and hubs with cup and cone bearings (as opposed to the half-complement industrial non-bike bearings on the original wheelset).

The new rear wheel never creaks when riding hard uphill. The old rear wheel still has the creaking problem, and probably can never be fixed due to the thread glue.

So, your issue could be that rear wheel has a non-equal or non-high spoke tension.

Not the answer you're looking for? Browse other questions tagged road-bike derailleur-rear rear-wheel noise clicking or ask your own question.

1
Chain Noise I identified the problem, don't know how to solve it (chain/cassette?)
2
Regular squeak from rear wheel
3
Bicycle clicking awfully, with video
3
Clicking front wheel, road bike
0
Clicking while pedaling
1
Bicycle clicking popping sound felt in the pedals usually when pedalling hard
7
What could have caused a rear derailleur to end up in the back wheel suddenly?
0
What is wrong with my bike? Where is this sound coming from?
1
Derailleur does not match up with chain after tube replacement
4
Clicking in a certain gear with SRAM drive train