Dual pivot brakes are marketed as having "more braking power", which in technical terms means higher mechanical advantage. Exactly the same effect can be achieved by longer brake arms (ones which are pulled by the cable).

It was pointed out that dual pivot brakes are more convenient to center, which I disagree with, but that's a different question; here I'm asking about getting the same mechanical advantage without two pivots.

Is there a technical reason to use a more complicated construction? By "technical" I mean "not related to marketing". "Dual pivot" definitely sounds "cool" and probably sells well.

The single pivot sidepull design requires a fairly wide pad gap at the rim in order for centering to not be too finicky. It's essentially the widest of all common rim brake designs. This is due to the spring design's two sliding contacts, as Jobst Brandt writes about here. The contacts are hard to keep at the exact same level of friction, and any disparity takes the brake out of center. You need a wide gap to compensate, at least for a normal person not fiddling with their brakes all the time.

You can't just add longer actuation arms to make the same design more powerful because it's still the same human hand at the lever end. If you want the pads to be able to touch the rim, then longer actuation arms with the same pad gap would require either shorter lower arms, which you can't do because there's a tire there, or a lever that pulls more cable. You can make the lever pull more cable, as in a v-brake lever, but note that v-brakes have a much smaller pad gap. That's why they can have a lever that generates much less mechanical advantage. Do the same thing with a hypothetical long-armed single pivot and you get a brake with very low power.

In other words, all brake designs are bottlenecked by the input force. You can't then have one that's also bottlenecked by pad gap and have it compete on power with ones that aren't.

What amount of pad gap should be designed in to the brake to overcome the centering issues is subject to both opinion and potential design advancement. You may even disagree with the premise that this is a design limitation, and that's fine; every real advancement in component design does. If you made a single pivot brake that could happily run with the pad gap of a dual pivot, then yes you could increase the arm length to get the mechanical advantage of a dual pivot. There's presumably some way of doing it with graphene.

Isn’t the dual pivot design in fact creating a longer arm? Just look how long the brake arm of the right (in the photo) brake pad is. From the left attachment point all the way to the right pivot. All this without a long arm sticking out sideways or compromising tire clearance (by making the other arm shorter). 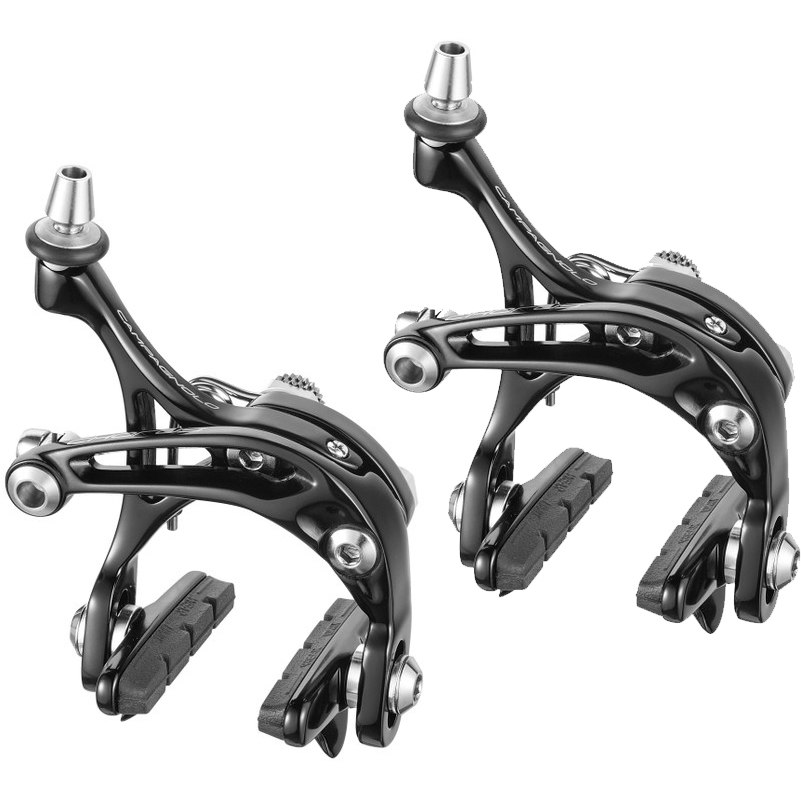 What has me a bit confused is that the leverage of the arm for the left (in the photo) brake pad seems to be much shorter, which should result in much less force on the left brake pad.

There is a technical reason.

Single pivot brakes had a faulty centering spring. The springs cannot be made from a single unbent piece of wire because it would bend too much. Instead, the springs are made from a wire that has a loop in mid-air. As this loop is not in the pivot point but rather in mid-air, in the location where the centering spring touches the brake arms, as the caliper arms move the spring slides on the point where it touches the caliper arm.

A good spring would have its loop in the pivot point, so there would be no sliding motion in the location where the spring touches the caliper arm.

Why is this a problem?

Because this is an area that is prone to becoming dirty. The dirt means the coefficient of friction in the sliding motion is unpredictable. A bit of dirt on the left brake arm and a bit (but different amount) of dirt on the right brake arm means the coefficients of friction on both arms become different. Thus, the brake does not return to the perfectly centered position.

For example V brakes and caliper brakes have the spring loop around the pivot point so this uneven centering problem is not a problem for them even though they have no forced centering mechanism.

However, even despite the low mechanical advantage, the single pivot calipers are still prone to develop a condition where one pad touches the rim continuously and all the gap is on the other side. Thus, the owner of a bicycle with single pivot brakes must be aware of the details of the problem. The fix to the problem is to often clean the points where the spring slides on the caliper arm, and always add a bit of oil there after cleaning.

With the forced centering of dual pivot brakes, it has become impossible to ride on a wobbly wheel. This, combined with the fact that wheels having less than 36 spokes are unfortunately very common today, mean that a broken spoke is the end of the ride unless you release the tension on the quick release of the brake (or loosen the cable anchor bolt), leaving you with only one functional brake. A 36-spoke wheel could perhaps barely work with even the forced centering of a dual pivot brake.

Also, one dual pivot arm pivots around a point which causes the pad to move upwards towards the tire, damaging the tire as the pad wears unless you notice the pad position needs adjustment as it wears.

Everyone is buying the dual pivot brakes, liking their high mechanical advantage and no centering problems so much that single pivot brakes have become extinct.

My opinion is that today the best rim brakes are linear pull brakes (V brakes). They center well, have as high mechanical advantage as dual pivot brakes (except the mechanical advantage is more in the brake arms and less in the lever so they require different kinds of levers), do not require the cumbersome cable stop that cantilevers require, and have no forced centering so they can track a wobbly wheel. Linear pull levers are available for drop bar bicycles too, although not with integrated shifters but integrating a shifter into a brake lever is a poor idea anyway. About the only problems with linear pull brakes are that in-line and in-noodle barrel adjusters needed with drop bar levers typically do not have enough adjustment range so you may need several in-line cable adjusters per brake, and that the pads move downwards as they wear so it's good idea to use thin and long pads as opposed to thick and short pads so you don't need to adjust pad position as it wears. Of course you can't install linear pull brakes on frames and forks that lack cantilever brake posts, so that's why it's important to choose a suitable frame and fork if using rim brakes. Disc brakes of course offer a compelling alternative these days.

If the bicycle has support for only caliper brakes, dual pivot calipers are the least bad choice today, although the design is a poor idea.

9
Most effective way to improve cantilever brakes
5
In what ways is a dual pivot brake better than single-pivot?
2
kid's bike rear brake not having stopping power
0
What is the mechanical advantage of mechanical rim brakes and levers?

5
In what ways is a dual pivot brake better than single-pivot?
3
How do I fix stiff dual-pivot brakes?
1
How important is centring dual-pivot brakes?
12
Is it possible to control two brakes from a single lever?
2
Longer pivot bolt for the front road brake?
2
Will dual pivot caliper brakes work on cantilever fork?
1
New road bike: alloy dual pivot brakes work poorly
12
First road bike: mech disc brakes vs dual pivot sidepull brakes?
3
Cantilever brake is missing its mounting screws and washers, how do I replace them?
9
How do bicycle brake manufacturers balance their products' physical limitations?