What is the name of the part between a wheel hub bearing and the fork, and where can I find a replacement?

I have a mountain bike (2017 Orbea Loki 27+ H30) and at some point I've lost the piece of the front wheel that fills the gap between the bearing, and the fork. As a result, the front wheel has play side-to-side, and is not able to be corrected as usual by adjusting the QR axle or hub. The wheel is a SunRingle Duroc 40 with Boost spacing. 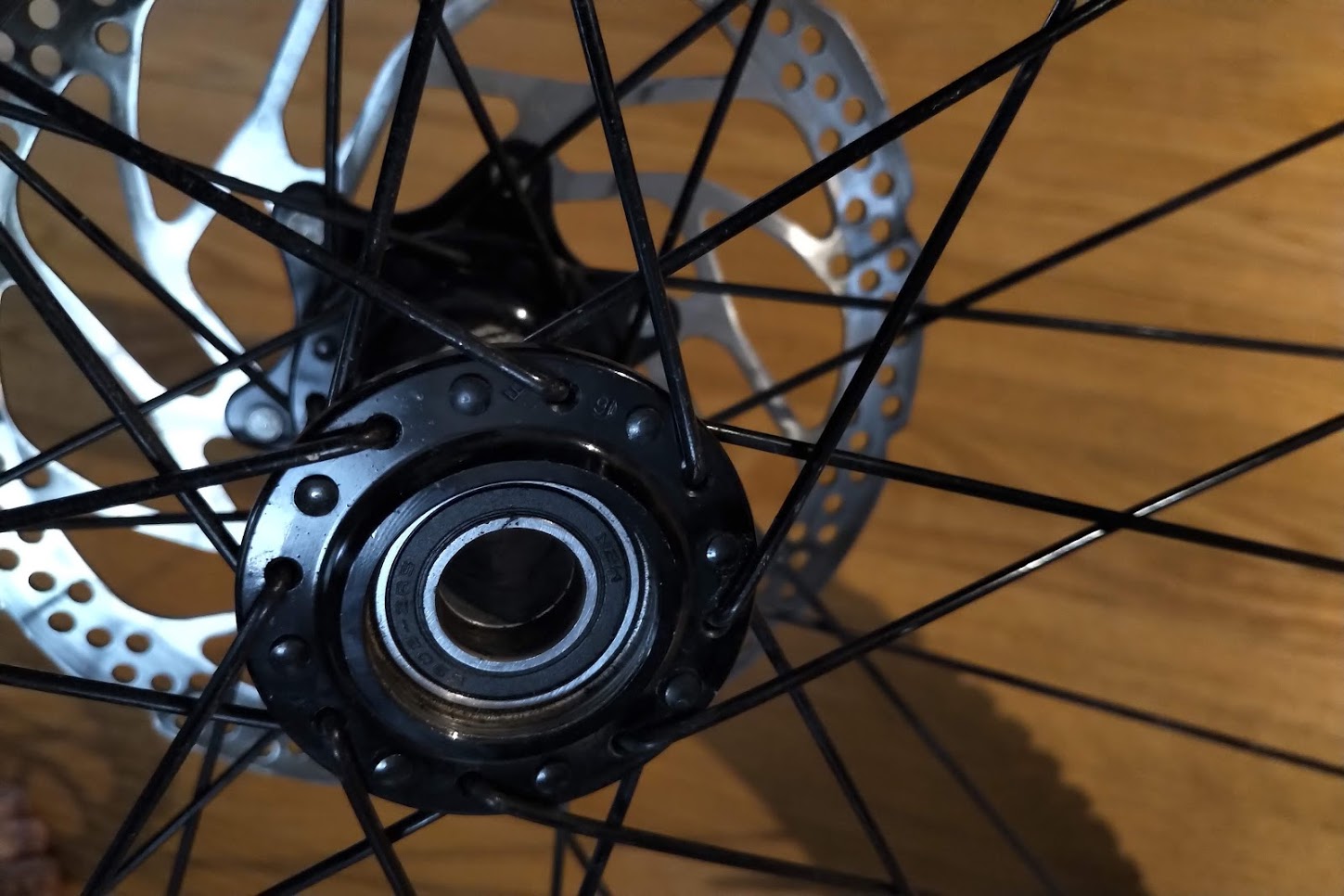 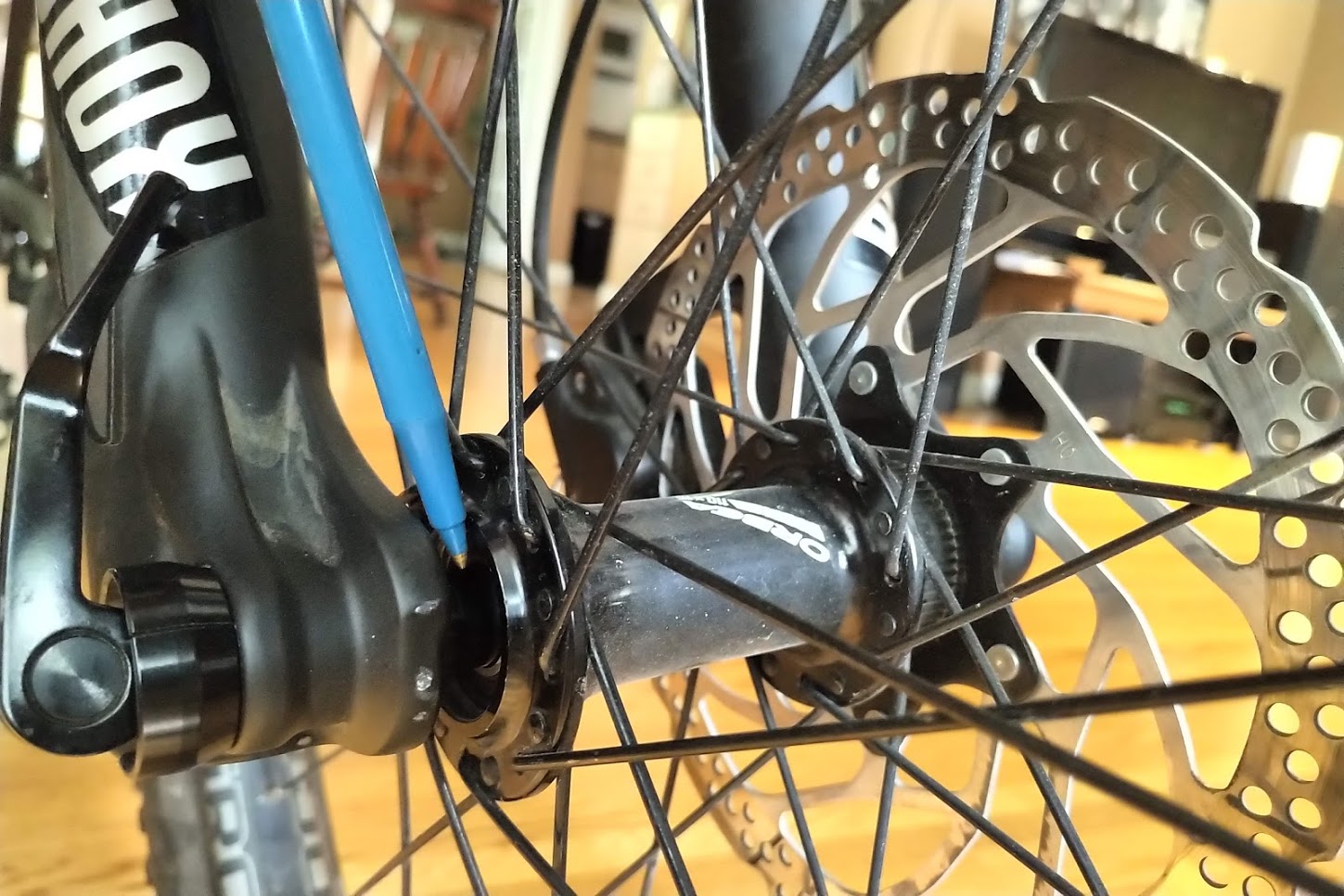 I took the bike to a local bike shop and they said I need a "hub spacer" and should contact the bike manufacturer (Orbea) for a replacement. I emailed Orbea and they did not provide me with a part number but assured me that it's a "standard part" and should be easy to find. I tried searching for "hub spacer" in combination with my wheel, but wasn't able to find anything like it.

What is this part called, and where might I find a replacement?

I think you are referring to an end cap. On some hubs, you can actually change out the end caps to accommodate either quick releases or thru axles (and for those, you can get end caps for 15mm or 12mm axles). Many older hubs don't have end caps, but many current generation disc hubs do, because road bikes sometimes don't use 12mm front and rear axles. Hence, the end caps may be detachable, and yours appears to have detached.

In an earlier version of this answer, I had missed the fact that Sun Ringle now supplies complete wheels. You should be able to approach either an Orbea dealer or Sun Ringle itself for spare end caps. Hopefully, Orbea just misinterpreted the term “hub spacer” when you asked the first time. When you say that, I would tend to think of the spacer supplied with some Shimano cassettes for use with certain free hubs.

The hub appears to have Orbea's own logo on it, so I the company should stock the appropriate spares - and their dealers should be able to order them from Orbea. Hence, if you're near an Orbea dealer, you could ask them.

However, the name for the wheelset that you gave does correspond to a Sun Ringle wheelset. I previously thought that company only made rims, but they also have a wheelset by the name you indicated, and they have spares for their hubs. Hence, you could also contact Sun. However, the link I provided does have a different looking hub, so you would need to tell them that you're after a previous hub model. In my experience, companies in general will usually have spares for older versions of their product, although this isn't guaranteed. If you approach an Orbea dealer, they might not be as familiar with all the smaller spares that the company stocks, and it might be a bit more difficult for them to locate spares for older models. Remember that there might be a large number of stock keeping units (SKUs) involved. If you approached Sun Ringle themselves (or more likely Hayes Corporation, their corporate parent), they should be able to help also.

Last, if you're in the US, Hayes appears to list Quality Bicycle Products (QBP) as a dealer; QBP supplies just about every bike shop in the US, so any shop might be able to search their inventory if you and they can identify the hub in question.

A tangent: why is all this so complicated?

This complexity stems from a classic make or buy dilemma. Many wheelset manufacturers or bike companies that have a captive wheel brand have OEM hubs. In context, they might buy the hubs from an OEM company and brand the hubs and/or wheelset to themselves. After all, making hubs is not exactly a simple business. If you are, say, Cannondale Bicycles, you specialize in designing bikes, not designing hubs. Hubs are quite complicated, so most entities in the bike industry buy them from specialty manufacturers. These arrangements are pretty common, they are not underhanded. Frame design usually operates similarly (which is why I said that Cannondale specialized in "designing" bikes, not necessarily in making the bikes in their own factories; I know that Trek made its top end bikes in the US at some point, but I think they no longer do so). For rims, I know for sure that Enve's factory is in the US, but most other prominent rim suppliers probably supply the designs to a Taiwanese or mainland Chinese factory. Back to hubs, Bitex and Novatec are two Taiwanese companies that supply a lot of OEM hubs, FYI. In contrast, DT Swiss does make (or at least design, but I don't have specific information here) both rims and hubs.

Alternatively, more sophisticated wheel companies might supply a design or design parameters to a factory, which would make the hubs for them; in that arrangement, the intellectual property for the hubs would rest with the designer (but NB: hub spare parts like freehub bodies and endcaps might be common to the hub manufacturer). My understanding is that at least some higher-end captive wheel brands use this arrangement. There are many boutique hub manufacturers as well, and very few of those firms make their own rims - and when I say “make”, I do include cases where they design their rims but contract with a factory (usually in Taiwan, sometimes mainland China) to make the actual rim. Last, in some cases, it can be confusing as a company might use multiple OEMs for their wheel lineup. I think that at least some of Bontrager’s entry level carbon wheels use Formula as the OEM hub maker, but I think their higher tier wheels may be the company’s own design, possibly contracting with DT Swiss for the hub internals.

Back to the question, in the (unusual) case where you knew the actual OEM manufacturer for the hubs, you could see about trying to get spares for those hubs. You usually wouldn’t call up Bitex or some other company in Taiwan, but individual wheelbuilders often use those hubs and would know where to get spares. If you were dealing with an identifiable wheel manufacturer, like Roval or Cadex, you could approach a dealer for the brand - however, note that those two firms are captive brands to Specialized and Giant respectively, so you'd really be talking about dealers for those bike companies. They are under the same corporate umbrella, and many Specialized or Giant bikes come specced with the captive brand's wheels. Captive brands may be managed independently from the parent brand; I recall that Cadex definitely doesn't share its management with Giant. However, I can't readily identify the OEM for those hubs. I know that at least some of Hunt Wheels' wheelsets used Novatec as the OEM supplier, but not all of them do - I think I heard that Hunt was contracting for proprietary hub designs, but I don't know their manufacturing partner.

In your case, I don't think that Orbea has its own captive brand, even though the company's own logo is on the hub. I suspect they may have contracted with Sun to supply the wheelsets and paid them to have the hubs branded to Orbea.

Also note the comments on this answer and the main question: it may be possible to have an endcap machined or 3D printed for you, although I don't know how much this would cost. Since this is your front hub, the endcaps should be symmetrical, and you could use or supply the opposing endcap as an example.

Not the answer you're looking for? Browse other questions tagged mountain-bike wheels fork parts bearings or ask your own question.