I have single speed road bike, with cottered crank and my caged bearings wear out too often, could it be due to me standing on the crank (like elliptical trainer) pretty often e.g. when i need to go up the hill or accelerate fast?

My experience in general with bearings (Wheel hubs mostly, and some bottom brackets) is that if they wear out too quickly in spite of being well lubricated and adjusted is either the ball bearings are poor quality or the races and cones are already damaged, or both.

When the races and cones are pitted, corroded, or deformed they wear the balls faster.

The other factor is that the bearing must be correctly pre-loaded (that is, the cones correctly tightening the balls against the races).

The only times I messed around with bottom brackets It has been square taper axles, and was having a similar issue as the one you described. At the time I used a low quality bike and the only replacements available locally where low quality parts. At first I thought the cups where unscrewing themselves, but took note of their position and no movement was apparent. However the axle developed play in about six months of about 4 days per week use, around 2-3 hours. (teenager, riding up and down small paved hills).

At first I tried using only the balls, without the cage, using as many balls as they would fit without the cage. But then I noticed the cups had small holes in the race (the channel where the balls roll) and also, the "cone" part of the axle had a "groove" made by using the worn balls too much.

The solution was to replace all the parts (cup set, axle and bearings)

My adjustment was to tighten the cups all the way until I felt resistance when trying to rotate the axle by hand, then receeding a quarter of a turn, then tighten the locknut. I had to try a few times until I got it right. (No play on the axle was perceivable by hand when forcing the crank arms, slight resistance to rotation due to the grease)

That was the last setup that I performed on that part of the bike and it where good for at least a year, when I "grew up" to MTB and got a new, better bike.

I would argue that standing on the cranks should not wear then any faster, at least if they are well adjusted and in good condition. On the other hand, using them while out of adjustment definitely makes them wear faster. (I had a bad experience with a cheap bottom bracket cartridge. It developed play but kept using it for commuting daily. After a month or two, the cartridge failed catastrophically leaving me unable to pedal and in the middle of a street right after an intersection)

Just for reference: here is an image showing the terminology I use. Please excuse me if the labeling is not correct. 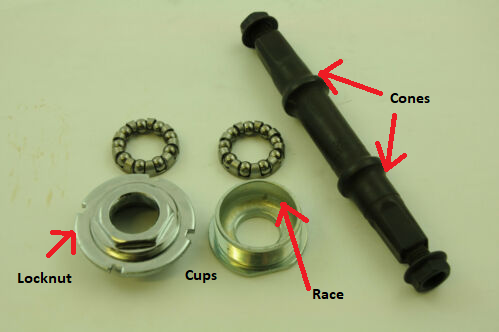 Not the answer you're looking for? Browse other questions tagged bearings cottered-cranks or ask your own question.

0
Ball bearings replacement for Windsor 4500
13
Why only ball bearings on bicycles?
5
Replacing bearings in pivot links
1
Outboard bearing bottoms bracket (hollowtech II) - assessment of wear and lateral play, lifespans & when to replace?
6
How much do ball bearings wear?
7
Can I replace ceramic bearings with steel bearings?
6
Choosing the proper bearings for replacement
2
Can I use ZZ (steel seal) ball bearing instead of RS (rubber seal)?