I need to make 2 cross spoke pattern (because lack of proper length spokes) for front wheel, i am however having some problem - green spokes stick out trough the rim ~4-5mm longer than blue spokes.

Blue spokes angle is -60 degree, green spoke angle is is +20 degree from the hub (compared to radial lacing).

Is this 2 cross pattern diagram wrong? 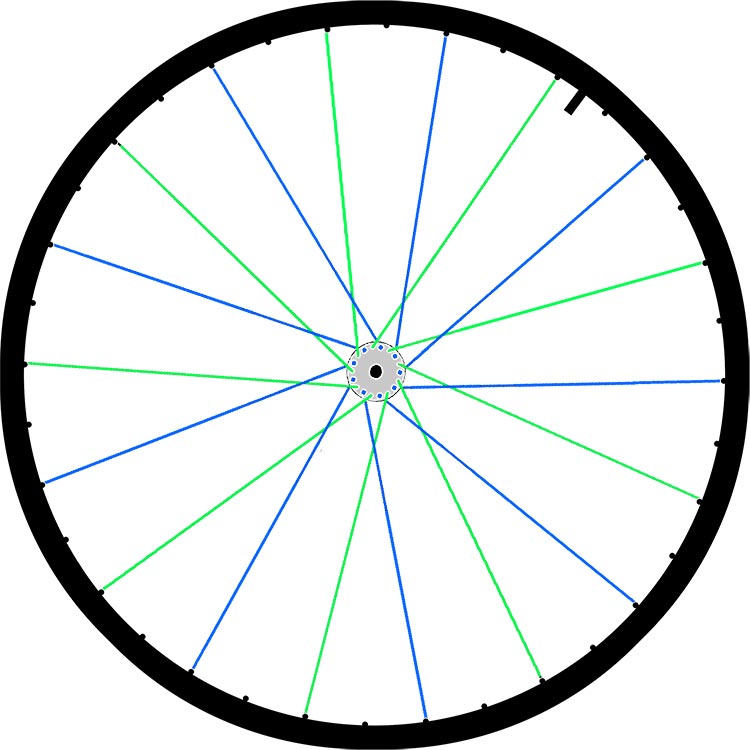 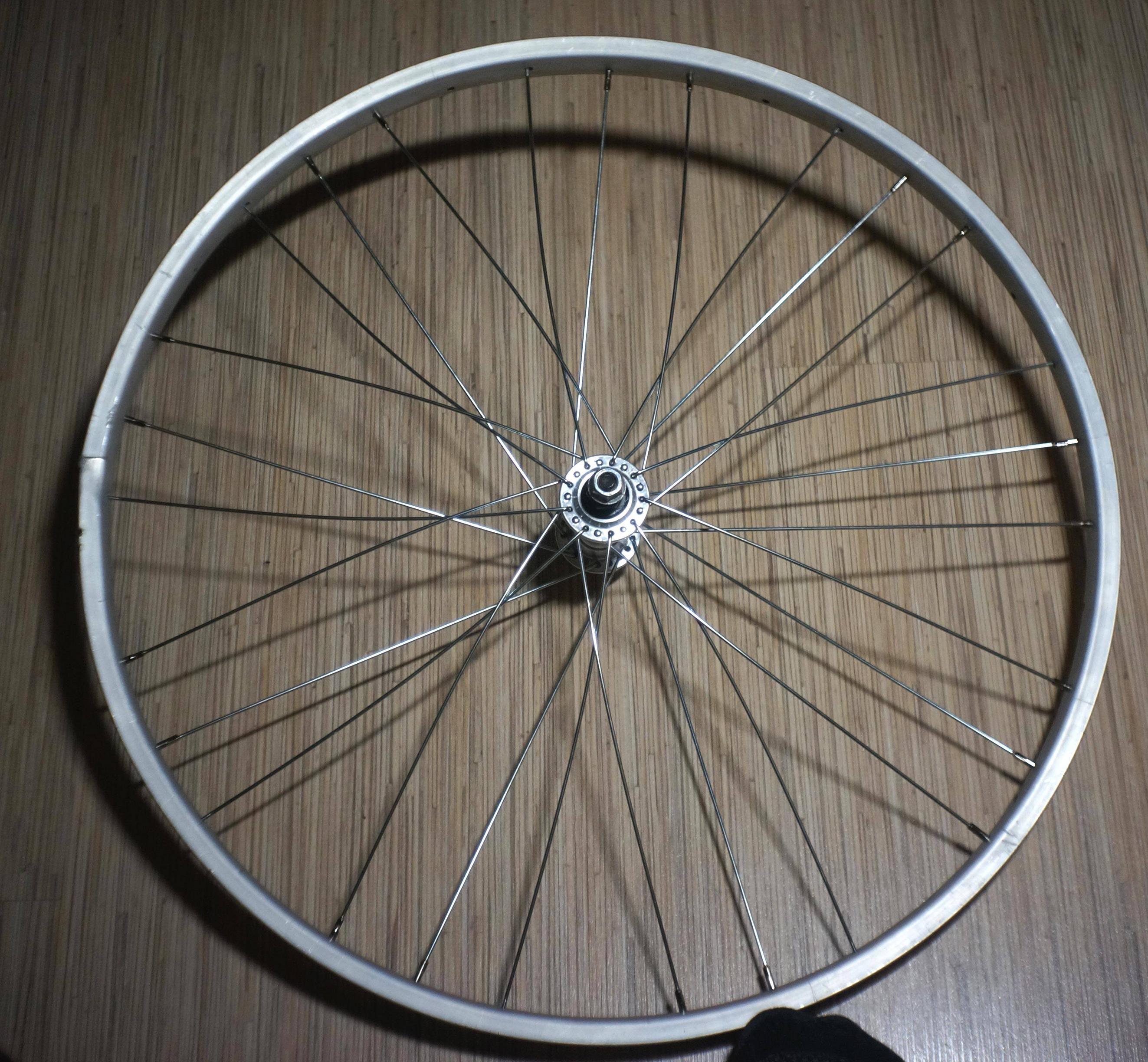 spokes wheel-building
Share
Improve this question
edited May 6 at 3:29

The top flange spokes in the picture are laced right, but the bottom is not. You need to make each pair of pushing and pulling spokes that follow each other coming from the opposite side flanges take consecutive holes in the rim. Take all the nipples off the bottom side, put the one I've marked in the hole I'm calling A, and then move all the other spokes on that flange the same number of holes down from where they were and it will be right.

Another way of thinking about why the angles are assyemmtrical as you describe is that the hub hasn't been able to have its "twist" done such that they can be symmetrical. 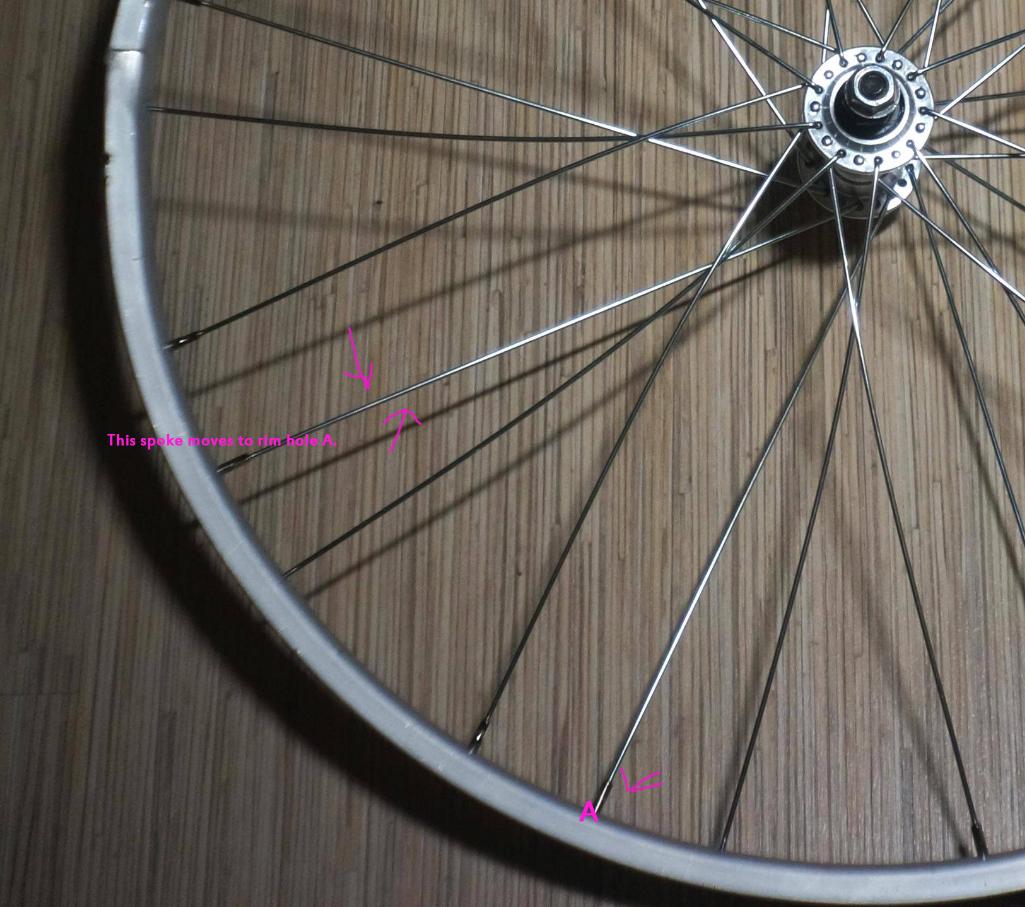 Look at the spoke at the 7 o'clock position in the image - the one that's brightly reflecting. Trace it back to the hub. It goes to the far side of the hub.

Now, at the rim, move one spoke to the right towards the 6 o'clock position. Trace that spoke back to the hub. It goes to the near side of the hub in the picture.

See how it crosses over the first spoke?

It shouldn't cross like that - it should be running to the spoke hole to the left of the brightly-reflecting spoke at the 7 o'clock position, not to the hole to the right of that spoke like it does.

All the spokes on that side of the wheel need to be moved 2 spoke holes clockwise as picture.

At least that will be closer - you may be further off than that as it's hard to tell from the posted image.

22
Is it really necessary to physically cross (interlace) the spokes on traditional wheel lacing?
5
Any experience about radially-laced hub flanges actually breaking?
3
Why is it important to keep equal number of turns when building a wheel?
4
Rim dish and flange angle problem
3
Which is the strongest lacing pattern for 32 and 36 spokes
1
Rear wheel power spoke pattern
2
32H 2x rear wheel for velodrome - is it ok?
3
Spokes are too long for wheel build. What did I do wrong?
1
Rebuilding wheel using 284mm instead of original 281mm spokes?