Can't get enough braking power after lots of adjustment

Hi :) I just bought a 2015 Specialized Diverge A1 with almost completely stock components. With some adjustments everything seems to work well except for the disc brakes.

This bike has a Shimano Claris 2x8 groupset and the mechanical disc brakes are Promax Render R.

I've ridden other road and gravel bikes before with mechanical disc brakes, and never felt unsure about stopping power, whether from the hoods or drops, until now. That's just to say I know what a brake should feel like, and I have decent hand strength. With this particular bike and brakes, I can hardly squeeze the levers if I'm riding on the hoods, and even if I get maximum leverage riding in the drops and can squeeze all the way, the stopping power is terrible. There's no hope of locking the wheels even just going 5mph. It's a very slow, weak rolling stop.

I've tried checking and adjusting just about everything I could think of or google, to no avail. I'll go through what I've tried:

In summary, I can't get enough stopping power with my disc brakes, and I'm also finding it practically impossible to squeeze the levers effectively from the hoods. They feel so stiff.

In terms of my inability to squeeze from the hoods, do my hands just hate this Claris lever/hood geometry? Are they weaker than I think? For the lack of braking power, is there some adjustment I missed? Is something else going on?

I'm doing all I can to fix this myself even though I'm a total novice, so any help is greatly appreciated :) 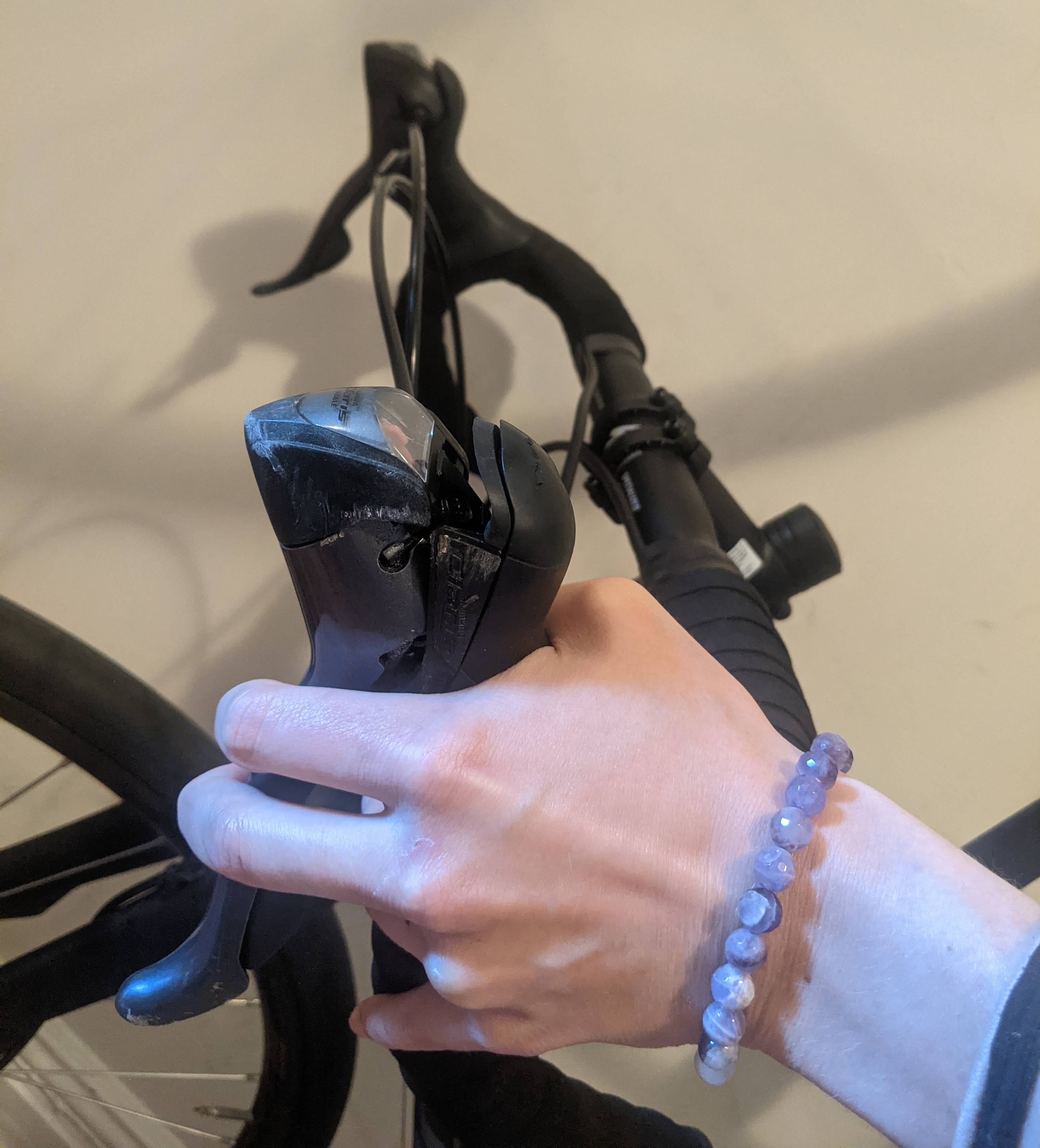 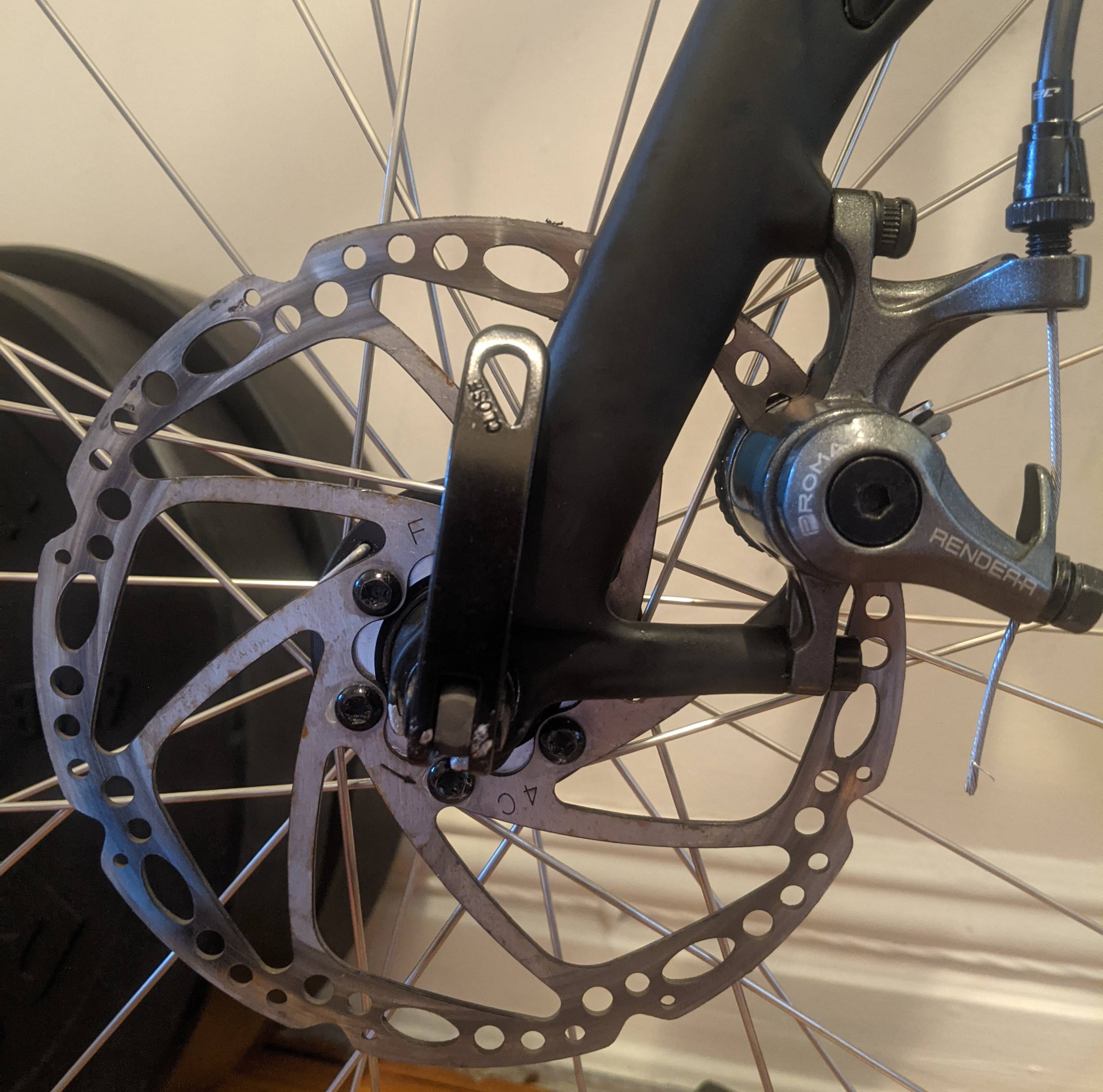 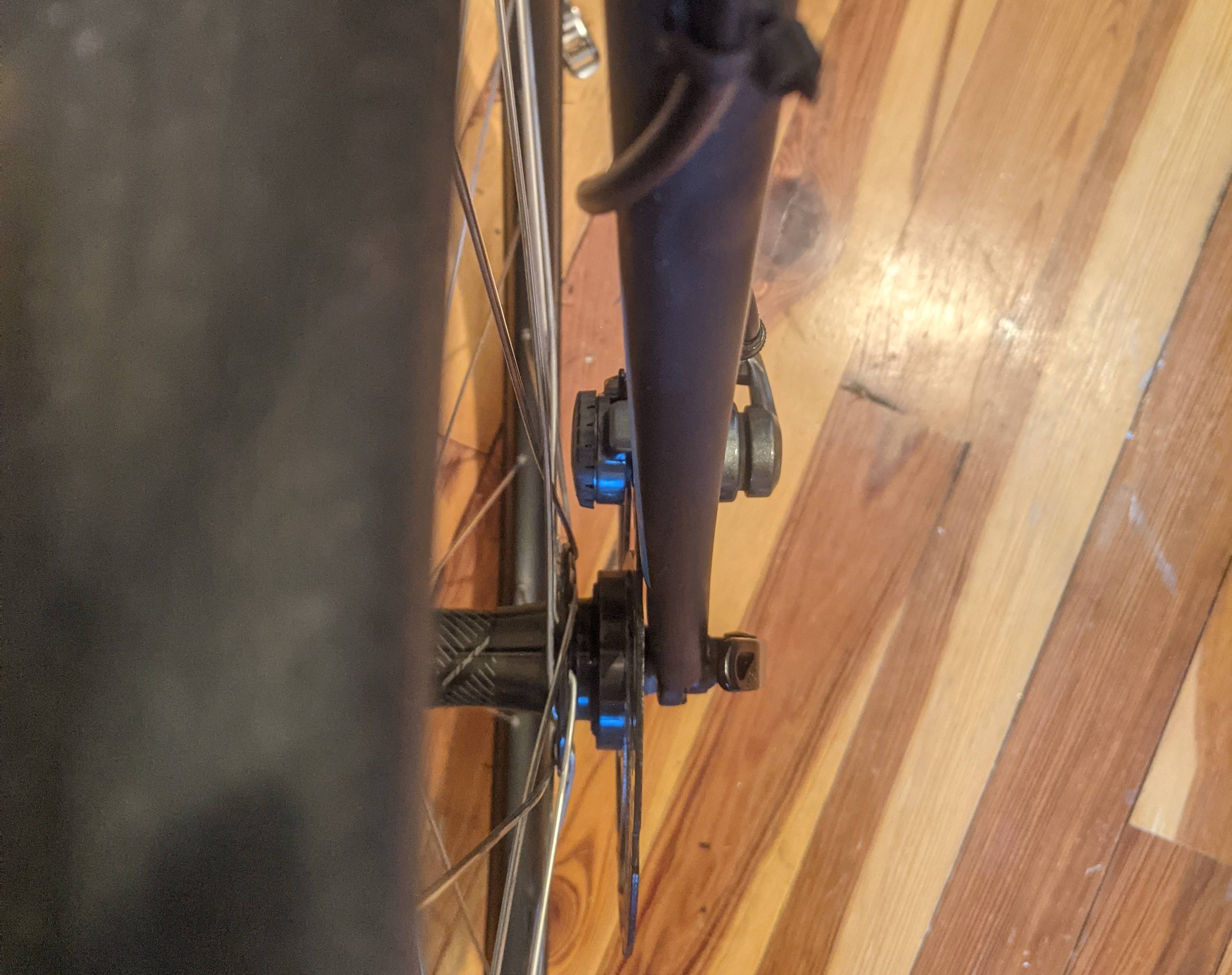 brakes disc-brake braking
Share
Improve this question
asked May 6 '21 at 16:44

Render R's are very susceptible to the arm being over-actuated. They don't hit a physical stop like some of their peers, but they reach a point where the cable anchor location is hanging in space and can't be pulled anymore. That you can't get good power even braking from the drops suggests this is the problem.

Detach the cable. Set the barrel adjuster all the way in. Loosen the caliper mounting bolts. Anchor the cable with the smallest amount of arm actuation you can while avoiding slack. Dial in the stationary pad adjuster until the lever feel is what you're looking for as a final adjustment. Tighten the caliper mounting bolts and get your pad gap dialed by squinting at it good. Even if getting free of rub is tough, trying this may tell you why power was lacking.

Like all mechanical disc calipers, this brake benefits highly from compressionless housing. Faced posts and compressionless usually let this brake perform fairly well. Also like all mechanical discs, small issues with the cable and housing setup can result in major issues with power and the levers bottoming too easily. Badly prepped housing ends, or housing ends not fully seated in the levers, can be an example.

those calipers are weak. Ultimately you may wish to replace them, but first:

Are the brakes bedded in? Follow a disc brake bedding in procedure (8 hard braking efforts from speed but not completely stopping).

You could try compressionless cable housing if not already fitted. It makes a noticeable difference.

You could try metallic compound pads if the disc rotors allow.

Replacement calipers could be something like TRP Spyre, Avid BB7r, Paul Klamper etc. These are better designs (there are others) that give better power and modulation but obviously cost a little extra.

There are things you can do with rotor facing, pads, cables, adjustments.

You can polish a turd but it's still a turd.

Did you bed the new pads in? It wouldn’t hurt to clean the rotor with isopropyl, then, one brake at a time, in an area without traffic, slow the bike from about 15 miles per hour to a near stop. You want to apply steady, firm pressure to the brake, without coming to a complete stop or locking the wheel. Expect at least 10 and as many as 30 repetitions per brake. Once you’ve put some heat into the system, you should notice that the braking force gradually increases from one near-stop to the next. When there’s no more improvement from one stop to the next, then you’re done. Move on to the other brake. After the burn in, it’s best to let the system cool completely before continuing to ride.

Some brake housings are designed to compress more than others. Most premium brake housing boasts minimal compression, while the mid to low end stuff tends to be usable in almost any system, but not as performant. Unusually, Shimano “M-system” brake housing is deliberately less stiff than Shimano road brake housing (SLR, SLR-EV, etc) on the notion that a less stiff housing is better to pair with mtb type brake levers which pull more cable with less force. I haven’t gone out of my way to compare the stiffness of M system brake housing with the inexpensive general purpose housing, but It’s the only housing I know of where a compression is a feature. While I don’t expect that to have such severe effects, I don’t have any firsthand experience mixing that housing with road or other short cable pull brake systems, and it’s out there. If you happen to see “M system” written on the brake housings, I would replace it with something intended for short-pull brakes.

If you’ve adjusted the calipers, cleaned the rotors and the pads, and the rotors won’t take the burn in procedure, it can be best to replace the rotors. When isopropyl doesn’t work, I’ve sometimes had luck using a product called “Squeal Out” to kind of reset the rotors. It’s an abrasive paste that you crush between the pads and the rotor, then clean it off with isopropyl and repeat the burn in. I prefer to apply it with old pads and then replace the pads, because I don’t quite trust that there won’t be residue to re-contaminate the pads, and it’s essential to get it all cleaned out of the little holes in the rotor, which is a pain. If there’s any of it left over, it seems to flow back out as it warms up and contaminate the brakes all over again, so it’s not my preferred solution.

Not the answer you're looking for? Browse other questions tagged brakes disc-brake braking or ask your own question.

5
What is lever throw and cable slack?
1
What is the matter with this Shimano disc brake lever?
1
fixie brake lever
4
Tips for adjusting Shimano M355 hydraulic brakes
6
Are there any adjustments for hydraulic brakes?
7
How to improve braking with hands on hoods?
0
Disc brakes don't work at all
5
Is there an improvement braking from the hoods from Shimano Sora 3500 to Sora R3000?
0
Why did I lose braking power after hitting a curb?