I used to have department store (Target) MTB that i used for 2 years until it got stolen, i used to ride casually in the city no complaints as of reliability. 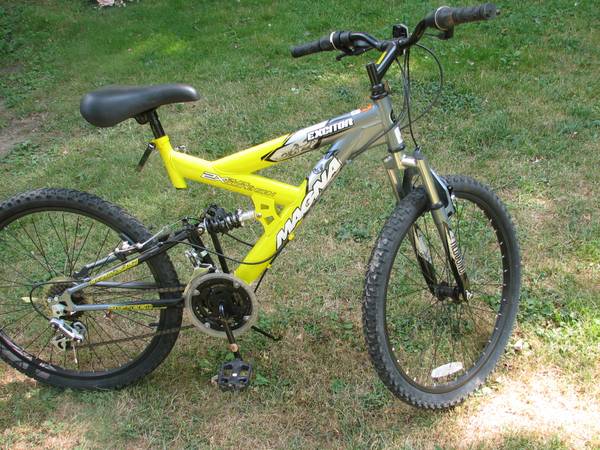 Want to buy same because we have very bad roads here where i live and i am tired of going over bumps on the city bicycle.

Where i live its tough to find used MTB with built in rear shock, would i get equivalent suspension if i buy hard tail MTB and upgrade to seat post with shock compared with bicycle on picture?

Suspension seat posts and full suspension have different jobs and can't be compared.

The primary goal of a suspension seat post is to provide rider comfort.

The primary goal of bicycle suspension is to keep the wheels in contact with the ground to increase grip and control over rough terrain. This has a secondary outcome of increasing comfort.

When you get on the bike, the saddle will move down a bit, affecting your bike position and varying the saddle/BB length. Some Some people minimise this by running the spring at high tension so it is rammed up against its stops all the time. This defeats the purpose, and still sags under increases in weight like bottoming out on a dip/landing.

By comparison, a full suspension bike will generally keep the saddle/BB height consistent, and also the rear axle/BB distance to minimise weird effects.

Why might it not matter? A road would have to be pretty harsh on vehicles to require a full suspension MTB. Sealed roads should be rideable by a road bike, and metalled/shingle roads only really need wider tyres to minimise sinking-in.

If you work on your technique, there's every chance a hard tail would work fine for you. Avoid smashing through/over potholes and obstacles, and even a fully-rigid bike would be rideable.

I think the main difference between full suspension and seatpost is the type of movement they can dampen. The full suspension will have a larger range of travel and so should be better for the big holes/shocks, while the seatpost should be better at evening out the smaller rough-road type of stuff. I have not personally used a suspension seatpost, but I find surprisingly positive non-fake reviews about items like "Kalloy Uno Comfort Suspension Seatpost" (example only). There are a number of very similar seatposts available for roughly 40 USD new, so that might fit your hardtail + post budget.

If you have a bike collective or budget shop that sells used bike parts in your area, I suspect you could get a good deal on a used suspension post, as they are not fashionable these days. As others have noted, a decent-quality used hardtail bike will probably pleasantly surprise you.

Not the answer you're looking for? Browse other questions tagged mountain-bike suspension full-suspension shocks or ask your own question.