Trying to tighten a saddle clamp but nothing seems to give

I'm first trying to remove a stuck seat post through brute force. I've removed the wheels, fork, and chain so that it can more easily be worked with upside down.

I began to turn the frame in a direction while the saddle was lodged in between something strong. After spinning the frame so many times, I noticed the gap (between the red lines) becoming bigger (than what is pictured). So then I spun it in the opposite direction to close the gap; how it was before I began all of this. Now, the gap doesn't seem to close anymore and I can spin the frame indefinitely—behaving similar to like a thread-stripped screw.

My belief is that I originally spun against the direction I was intending for, and now I'm spinning in the intended direction but endlessly. If the gap closes then hopefully I can try to loosen the seat post.

Frame is chromoly, I think the post is aluminum.

What do you think is going on here and how do we remedy it?

Disclaimer, I'm not concerned about damaging the seat post or the saddle (obviously). I ultimately just want to install the new water bottle cage that hugs onto the seat post. 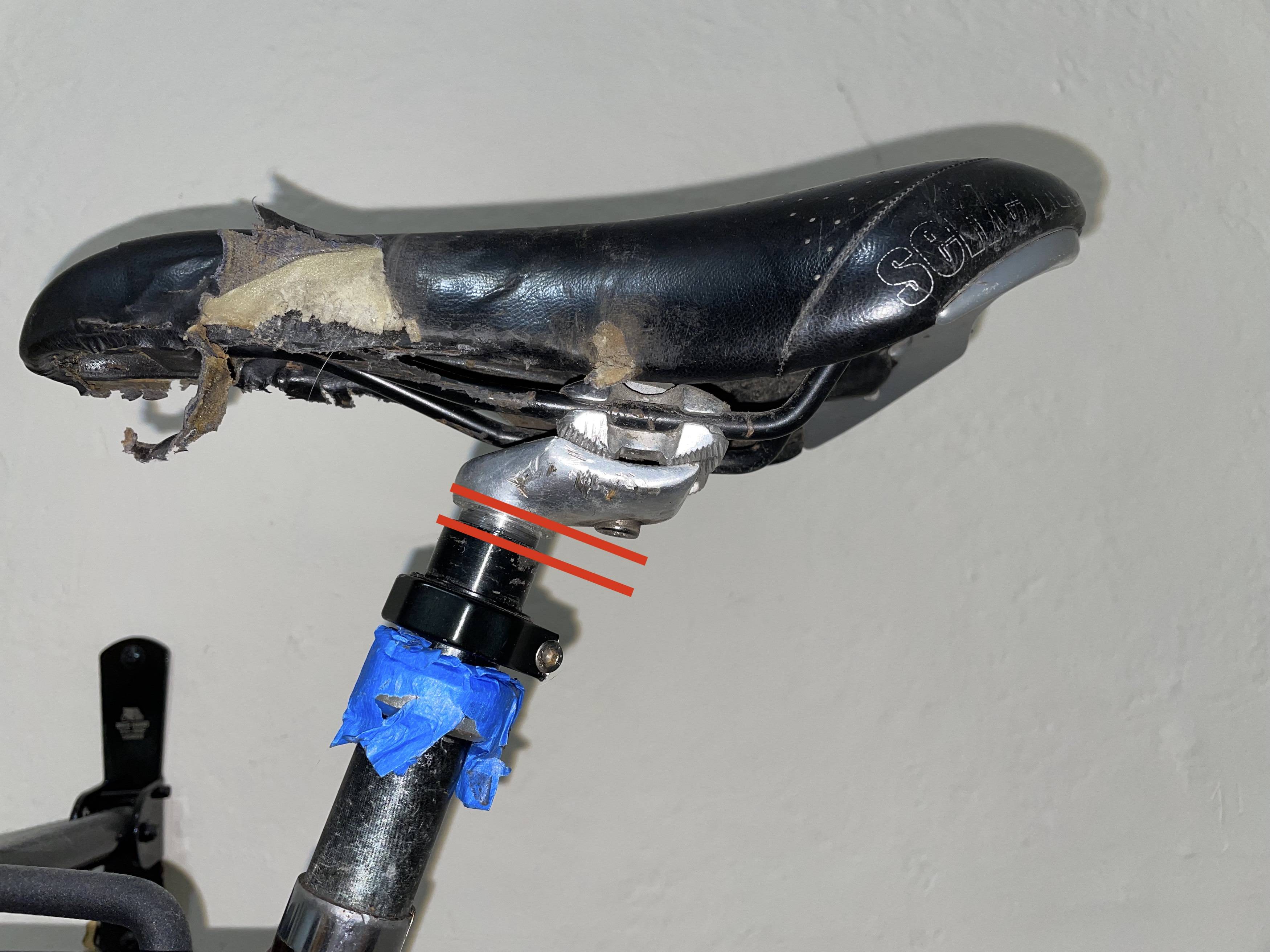 saddle seatpost
Share
Improve this question
asked May 18 at 19:33

It may be a silly question from my side: Did you loosen the bolt on the seatpost clamp (the one above the blue tape)?

The saddle clamp isn't screwed in but either shrunk-fit or glued in place. So your seatpost is toast. Removing a stuck post is a classic problem. It can be very hard, if the post hasn't been taken out for a long time and put back with a liberal coat of grease, anti-seize paste or carbon compound if either post or tube, or both are made of carbon.

To remove the post, try first with penetrating oil and letting it soak for plenty of time. If you can rely on a mate to hold the frame grip the post with a water pump wrench. Be careful though not to damage your frame.

On YouTube in bicycle dedicated channels you may find several more methods to proceed as it is quite a common problem.

23
How do I keep my seat from tilting back?
6
I sit real far back on my saddle
1
What is the proper way to tighten dual bolt saddle rail clamp to stop rail slippage?
6
'Micro adjust' saddle clamp not allowing fine enough adjustment (on SP12 suspension seatpost)
4
Suggestions for protecting jeans from saddle clamp bolt
0
What to use on saddle clamp?
0
Seatpost clamp arrow and too wide saddle rails
4
What saddle rail clamp should I get?