Any history on Viscount bicycles?

I managed to pick this Viscount bicycle up from my local scrapyard along with a 1987 women’s BSA bicycle. Both of these bicycles work. The Viscount has a sticker on it saying triple champion 1981 so I presume that is the year the bicycle was made. Does anyone have any information about the company or the bicycle? 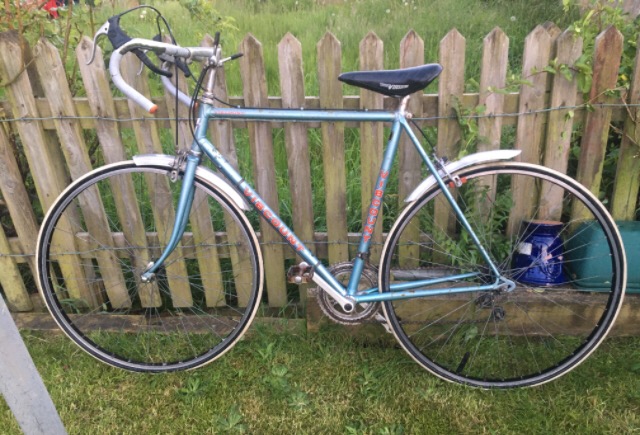 Based on my research with a little work and a possible fork replacement you have a nice riding bike.

It is difficult to read the label on the top tube given the blurry picture (I suppose it could be my eyes) but that should be the name of the model.

Viscount bicycles were made for about 10 years. The produced a variety of models at various price points and quality levels.
sheldonbrown.com

In the 1970's an English "ærospace" company built, under the names "Lambert" and "Viscount", surprisingly inexpensive, very lightweight bikes made with "ærospace" tubing. Now, that, in itself is not as impressive as it might sound since the aerospace industry specs a pretty wide variety of steel tubes for different applications.

The tubing used was straight-gauge chrome-moly steel; the Viscount version of the bike had a detailed sticker on the seat tube detailing the type of tubes used, throwing in a few references to military specs, etc. Lambert Bicycles were later called "Viscounts" after the company was purchased by Trusty in 1975 or 1976.

The bikes (both Lamberts and Viscounts) came with a cast aluminium (aluminum) fork which was pinned to a steel steerer tube. Early production didn't even have the pin. This fork was the main problem as it had a tendency to snap off the steerer tube with predictably unfortunate consequences to the rider.

Yamaha purchased the Viscount in 1978 or so and promptly recalled every cast aluminum fork ever sold on a Viscount or Lambert, replacing them with a chromed steel Tange fork.

Despite successes in various races and being named as bicycle of the year in 1980, the marque seems to have disappeared completely by 1982 or 1983.

The Lambert & Viscount Bikes blog is very extensive with links to other resources.

Not the answer you're looking for? Browse other questions tagged gears cassette identify-this-bike chainring history or ask your own question.

0
What are simplest rideable bikes over history?
3
Finding the history of my 1980s Norco Bike
3
Help to find the history of my 1900's Armstrong cycle :)
6
I have a bicycle that is yet to have been identified by anyone
19
How can I tell what year my bike was made?
2
Bicycle fork design history
1
Any help with the History of Guaranty Quality Supreme Fleetwood Bicycle 1963 – 64
1
Cito bicycle history / old steel bike identification