Help determining how many cogs an unlabeled freehub wheel can take

The easiest way to determine how many cogs (how big a cassette) a Shimano freeub can take is to measure the width of the freeub body. That is, essentially, the length of the splined portion of the freehub. While there are various types of freeub standards that have been in play over the years, today's most common is the Shimano hyperglide freeub and this is the design relevant to the subject of your question, using a Shimano Altus 9 speed cassette.

Early hyperglide freehubs accommodated 7 speed cassettes. Seven speed freeub bodies measure 31mm and can only fit 7 speed cassettes (unless one uses certain tactics, like the one you mention at the end of your question). There are still a good many wheels in circulation that have these 7 speed specific freeub bodies, especially within the 26" wheel class. Trying to put a larger 8, 9, or 10 speed cassette on the 31mm, 7 speed freeub will not work as the smallest sprocket has no room to engage the splines of the freeub so will spin freely and not drive the bike. In addition, the cassette's lock ring is unable to engage the threads of the freeub body which prevents mounting the cassette.

With the advent of 8 speeds, Shimano increased the width of the freeub body to 35mm. Since all Shimano style, 8, 9, and 10 speed hyperglide cassettes are the same overall width, if one has a hyperglide freeub with a 35mm wide body, any cassette from these speed classes (as well as mountain 11 speed) will work on that freeub. A 7 speed cassette can be used on the wider freehub as well with the addition of a 4mm spacer before the 7 speed cassette goes on. So the quickest way to determine if your freehub is compatible for the 9 speed cassette is to measure the body. If it's 35mm, it's compatible.

Here's a photo of a 7 speed freehub next to an 8/9/10 speed one Please note that based on the appearance of the ruler in the photo, it appears to contradict my given measurements. However this is an illusion and the use of calipers confirms the listed Freehub body measurements of 31 and 35mm: 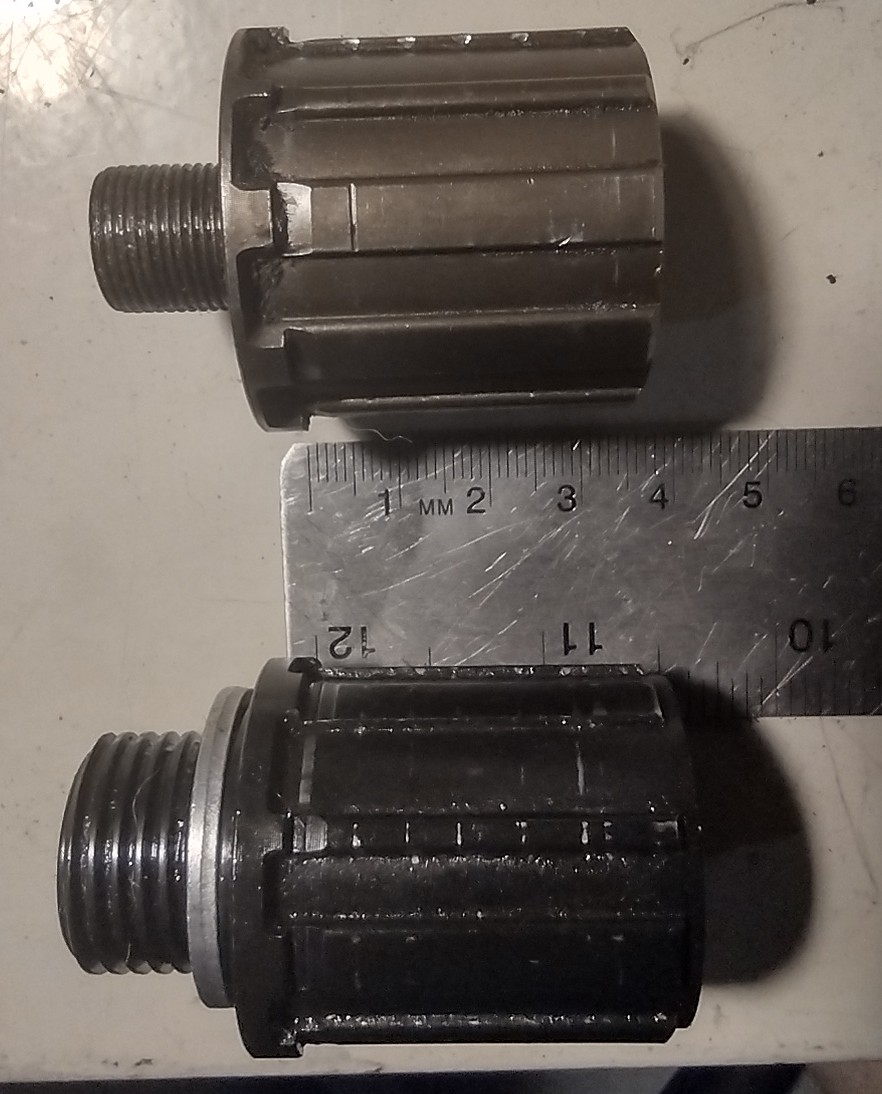 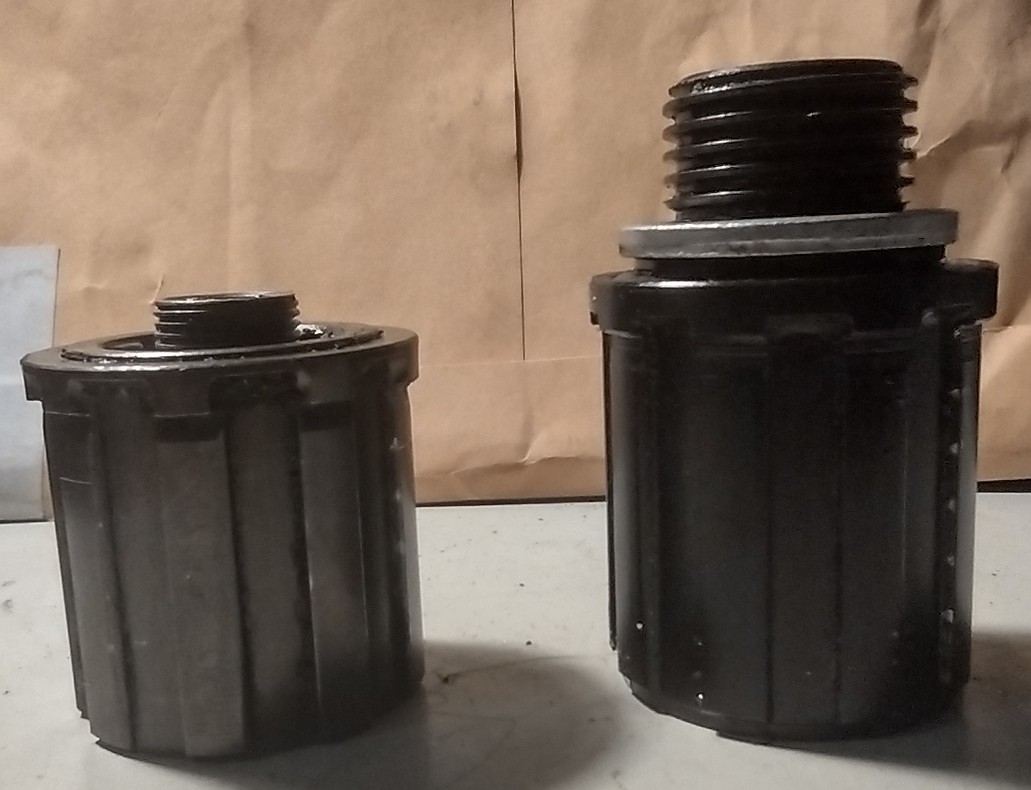 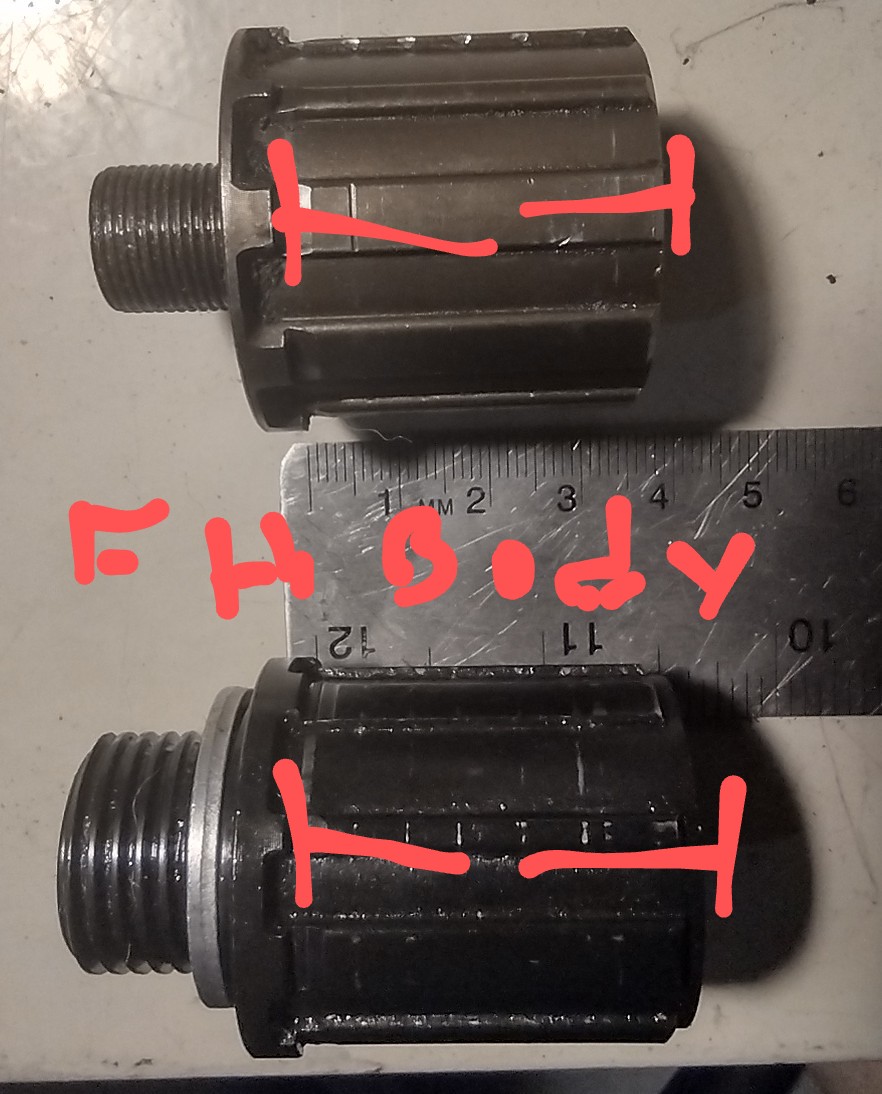 Regarding the last part of your inquiry: Yes. One can use 8 of 9 cogs of a 9 speed cassette on a short, 7 speed freehub as long as 9 speed spacing between the cogs is used (kind of a given if you are using a 9 speed cassette) and you use a 9 speed shifter so that the shift spacing correlates to the cassette cog spacing. It's typically best to NOT eliminate the small, 11 tooth (or whatever size small cog) since these will have ridges that communicate with the lock ring and help fasten the cassette to the hub properly.

Not the answer you're looking for? Browse other questions tagged cassette rear-wheel freehub or ask your own question.

4
Mounting a 7-Speed Cassette on an 8/9 speed hub
4
cold setting 3-speed road frame to 7 8 speed cassette
0
Triple chainring + nonstandard sloped cogset. Can this work?
1
Can I swap freehub bodies?
2
How do I achieve a lower gear on a Norco Bigfoot with a 9 speed cassette?
3
Rear wheel replacement: freewheel -> freehub and cog size changes
0
Looking for advice - cracked rear hub along bearing races - How to buy a new rear wheel?
6
Freewheel replacement for a touring tandem bike
1
Which freewheel/cassette for this bike?
4
Shave 1.85mm off to get an 11s road cassette onto a 10s hub