Wondering if this crankset from 1990 is still safe to use

so I bought a used bike from 1990 and it came with a FC-M550 Deore crankset, but I'm not sure how safe it is to use in its current condition since there seem to be some small hairline cracks around the taper hole of the left side crank, especially at the corners, a few cracks around the pedal spindle hole of both cranks, and a thin crack running down the side of the drive-side crank.

A new replacement crankset would cost over $50, which I'm hesitant to spend if the damage is mostly cosmetic. I'm not entirely sure what fatigue cracks on aluminum cranksets are supposed to look like, and although some of the striations (like those around the mold injection holes) might simply be patterns introduced during the forging process, others are actual cracks. 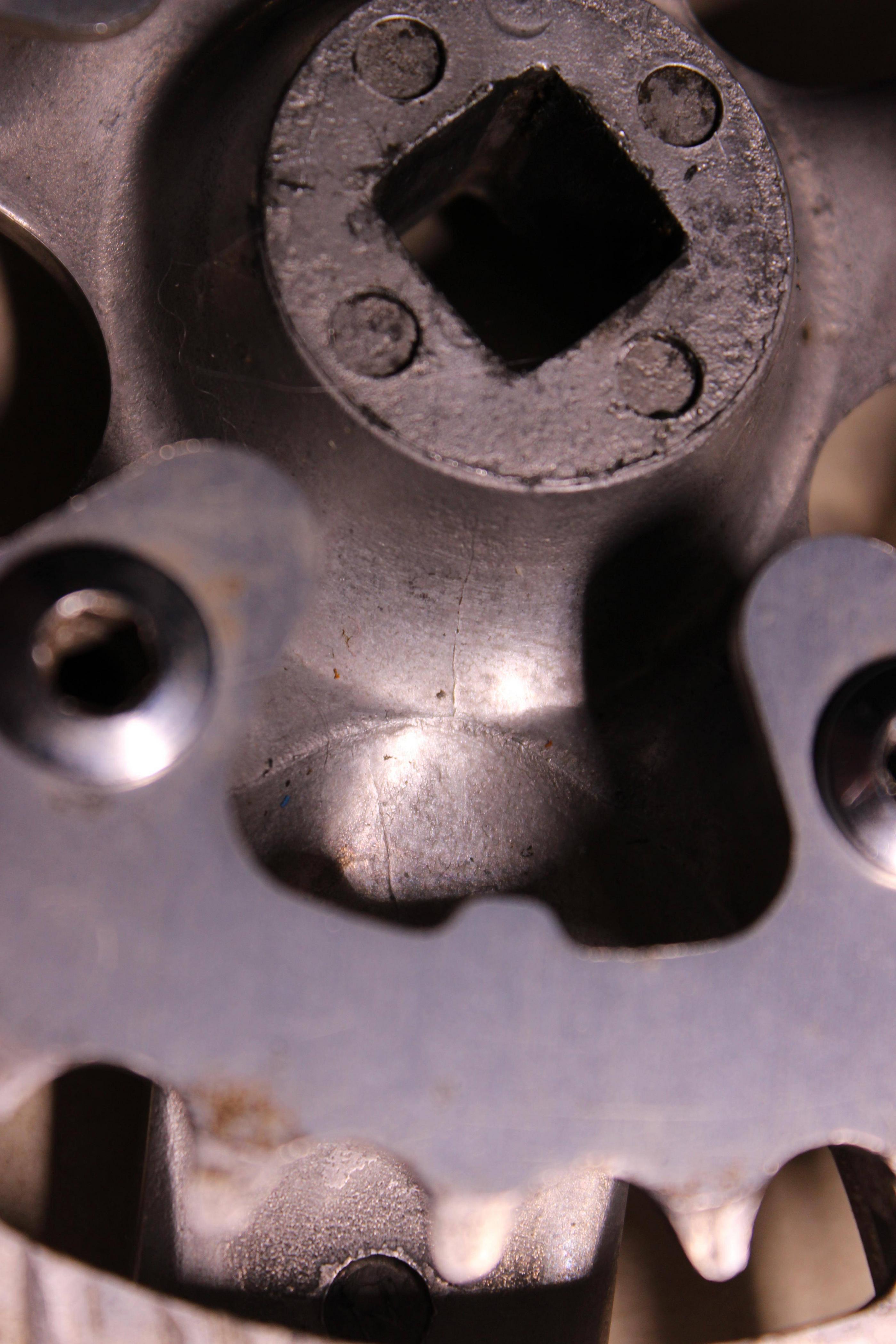 Notice the thin crack down the middle ^ 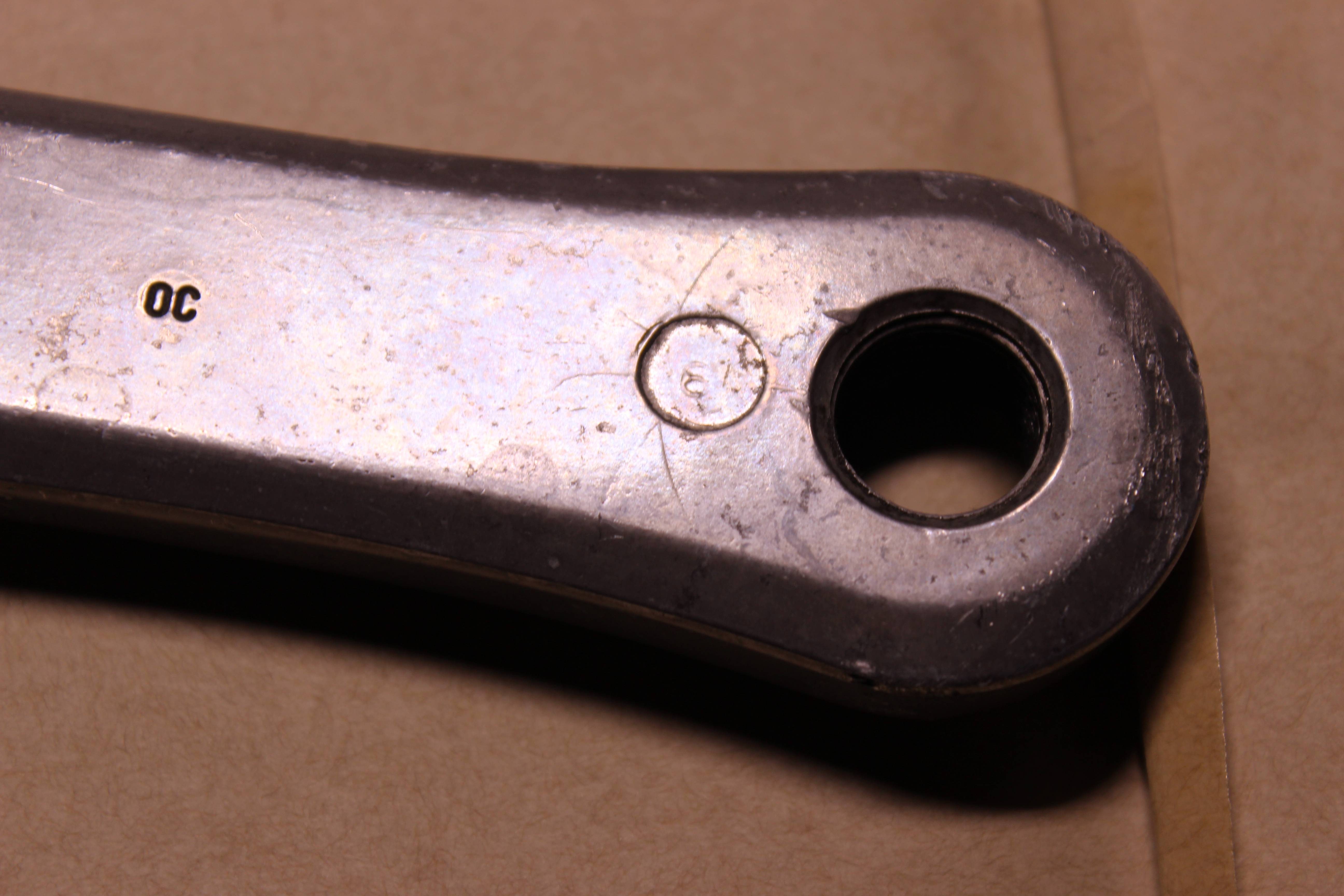 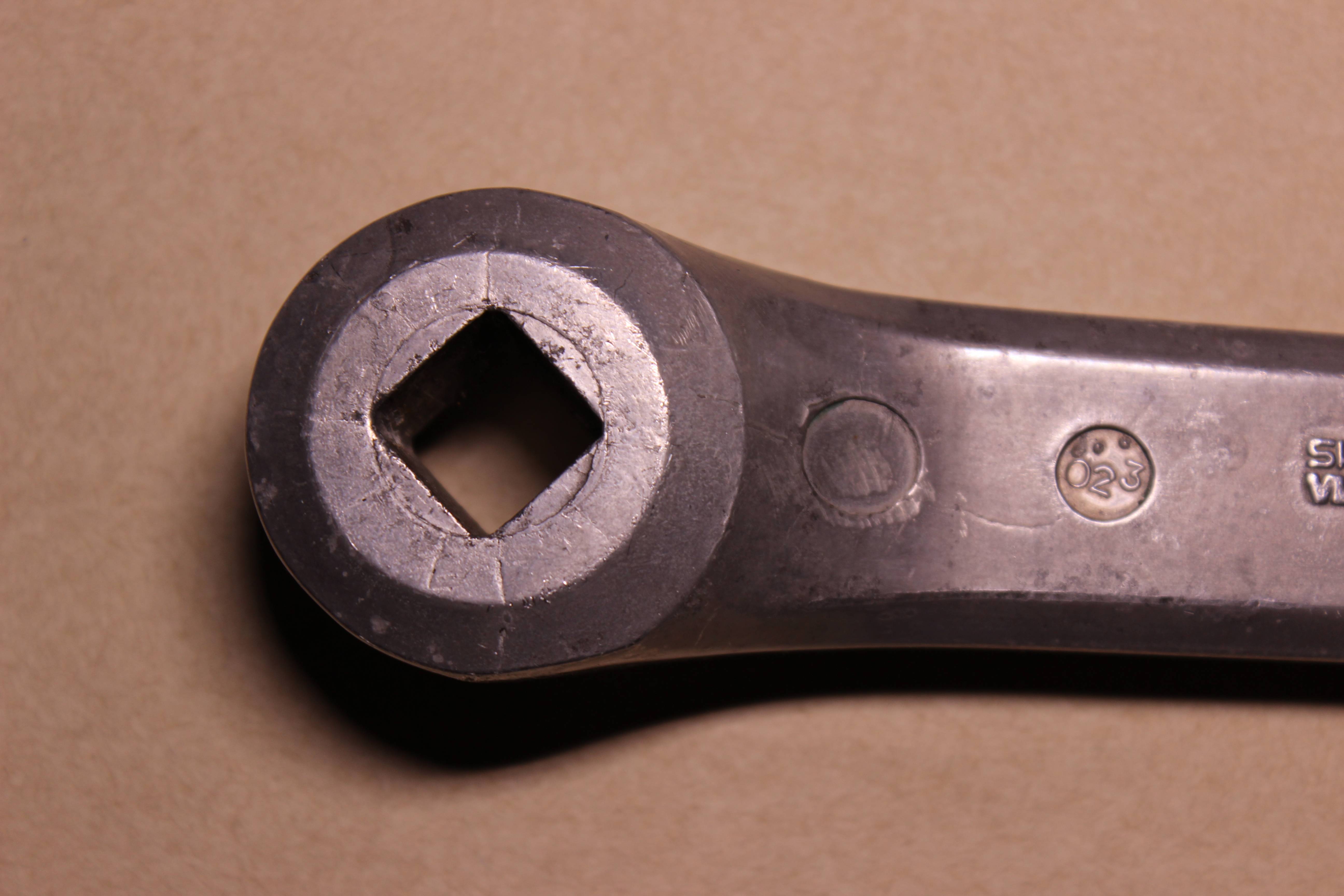 Pretty visible cracking around the corners of the taper hole, though they haven't visibly spread beyond the edge 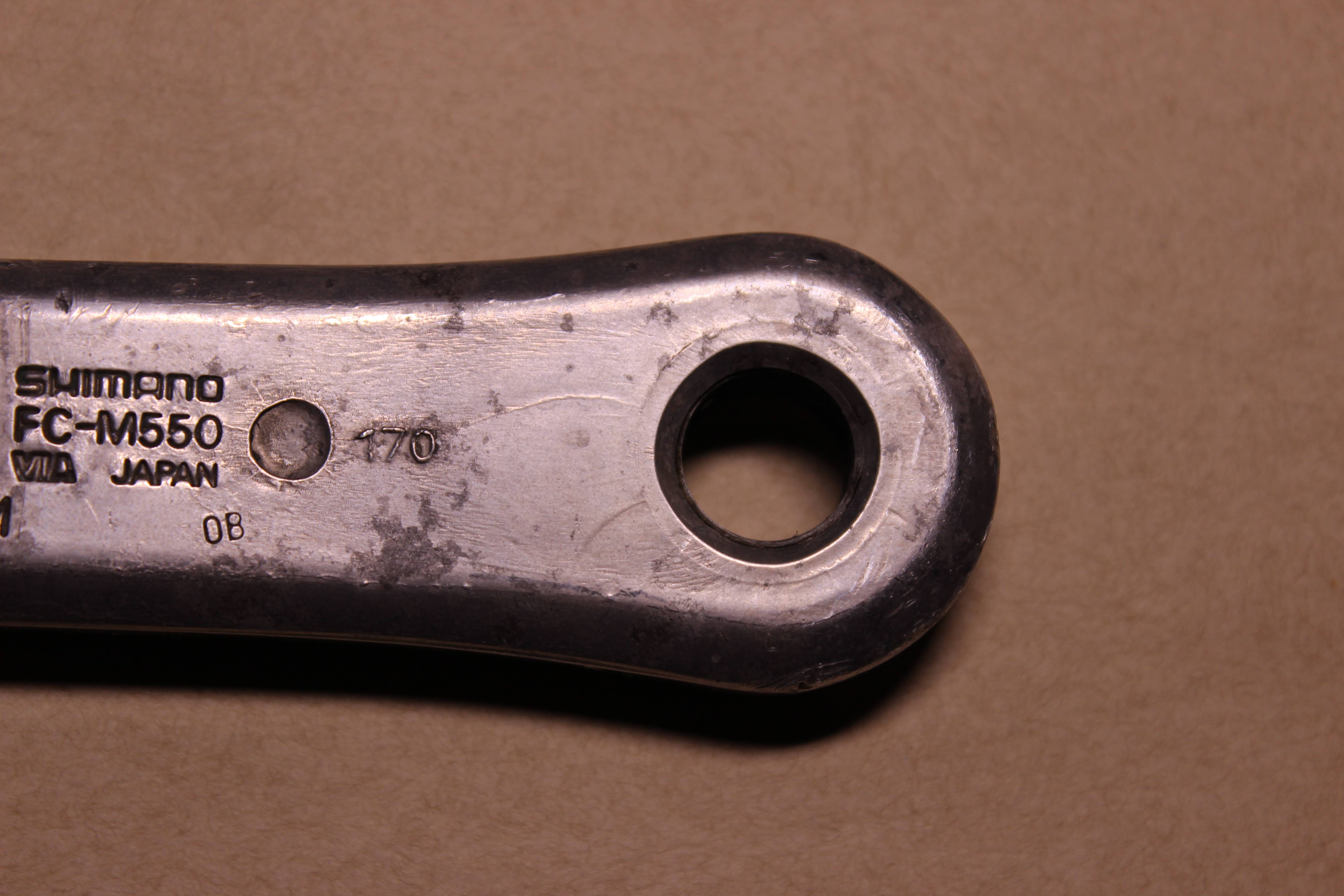 The cracks are a bit difficult to see in the photos because of the bad lighting and limited depth perception, but they are there. The crankset has held up for the past 30 years so I don't reckon there's much risk making do with it for now, though I'm probably going to replace it at some point.

As posted, I'd say NO, not safe to ride.
Hard to know from photos - my answers here might change if I saw them in person.

Photo #3 looks easiest to test, by securing the crank arm in a vise and gently lever on the inside of the square drive hole with a screwdriver or something wooden. Don't go crazy with pressure, you're just looking to see if the crack widens under load. If it cracks further, then it was already dickered and you didn't break it any worse than it already was.

Photo #2 suggests a curved crack - this could be tested by threading in a pedal and leaning on that, with crank arm in a vise.

The crack in photo #1 looks like its aiming at the corner of the square taper, which would be the natural stress riser, but its not starting at the corner, so that one is confusing.

In #4, there's two candidates, but neither are where one might expect stress to accumulate, at the narrowest parts. Not sure on this one.

Given the crankset is 30 years old, and its done a solid amount of work, I'd suggest replacing the crankarms and therefore the spider too. Your chainrings are probably 110 mm and 74mm BCD, and could be moved to a less-cracked chainset if they have wear left in them.

What's the risk of riding these cranks as pictured?

Taking photo #3 - there are cracks radiating from the bottom bracket interface. So the most stress on this point is when your left foot is forward and you're powering into a climb, pass, or sprint.

When one cracked side lets go, the other crack will immediately fail too. The crank arm remains will be held on by whatever friction the bolt can give, which is orders of magnitude less.

Your left pedal would hit the road surface before you can react.

If you're out of the saddle, you will hit the saddle about the same time, or maybe miss it on the way down to the top tube.

Your left foot will now be going backward fast, and depending on your reaction time and where the front wheel was, you could fall to the left or to the right equally. So you will loose speed and skin fast.

In a bunch or pace line you risk taking out every rider in a cone-shadow behind you as they all evade or ride over you.
If you're riding in traffic, that could be a car right behind you instead.

Even if you're relatively unscathed (say you were just pulling away) then your bike is damaged and maybe only pedallable by one leg, and only if you have cleats/toestraps. Otherwise its a walk home, maybe a scootering on the other pedal, or perhaps an inelegant dandyhorse stride while sitting on the saddle. Perhaps its the dreaded phonecall of shame to someone at home for a pickup, or maybe someone else has to call because you can't.

Replace the cranks, as soon as you reasonably can. If you legitimately have to ride this bike somewhere, then take your time to stay seated and avoid any power efforts or climbs.

And remember it is totally okay to own more than one bike, for situations exactly like this.

Photo 1 is not necessarily a crack, might also be a casting seam. Can't really see from the photo.

The other photos definitely show cracks emanating from the place where the cracks should appear, so that adds up. Those can crack from overtorqueing them.

Safe... depends. If you're just pootling along at a leisurely pace and never stand on the pedals, it's not exactly safe, but also not deadly. Might mean a walk home. If you put any kind of stress on the cranks, UNSAFE. If you stand to pedal or put in a lot of power or stand up while coasting, this is extremely dangerous.

I wouldn't ride a metre with those.

1
Clicking noise from crankset
0
Will this crankset fit my bottom bracket?
19
Noticeable clicking from crankset or bottom bracket
9
Chainring rubbing frame after tightening cranks. What should I change?
0
Will this crankset be a good replacement
3
What kind of crankset is this?
7
Why does this hollowtech crankset have play?
3
Can i use a XT 8000 crank instead of GRX crankset
1
What model is this Stronglight crankset?
4
What tool do I need to use for this specific Crankset (picture) FSA M17 38-41 Nm from Giant TOUGHROAD SLR 2