What type of bottom bracket does my bike have?

I found this old fixed gear conversion on CL for next to nothing. It's been really fun but I've noticed play in what I thought were the crank arms, but it turns out the spindle inside the BB has play. I tried tightening the BB where it threads into the frame, but the spindle will stop spinning if I tighten it to a reasonable degree, so I decided to turf the BB and crankset (the chainring is pretty warped).

Unfortunately I cannot figure out what kind of BB this is. I know it's a traditional square taper but it has this weird semi-integrated style and I can't find any similar BBs on Google. I have no idea what the frameset is so that makes it harder.

I know it's an old steel road bike, that's about it. I'd guess it's a Triumph. 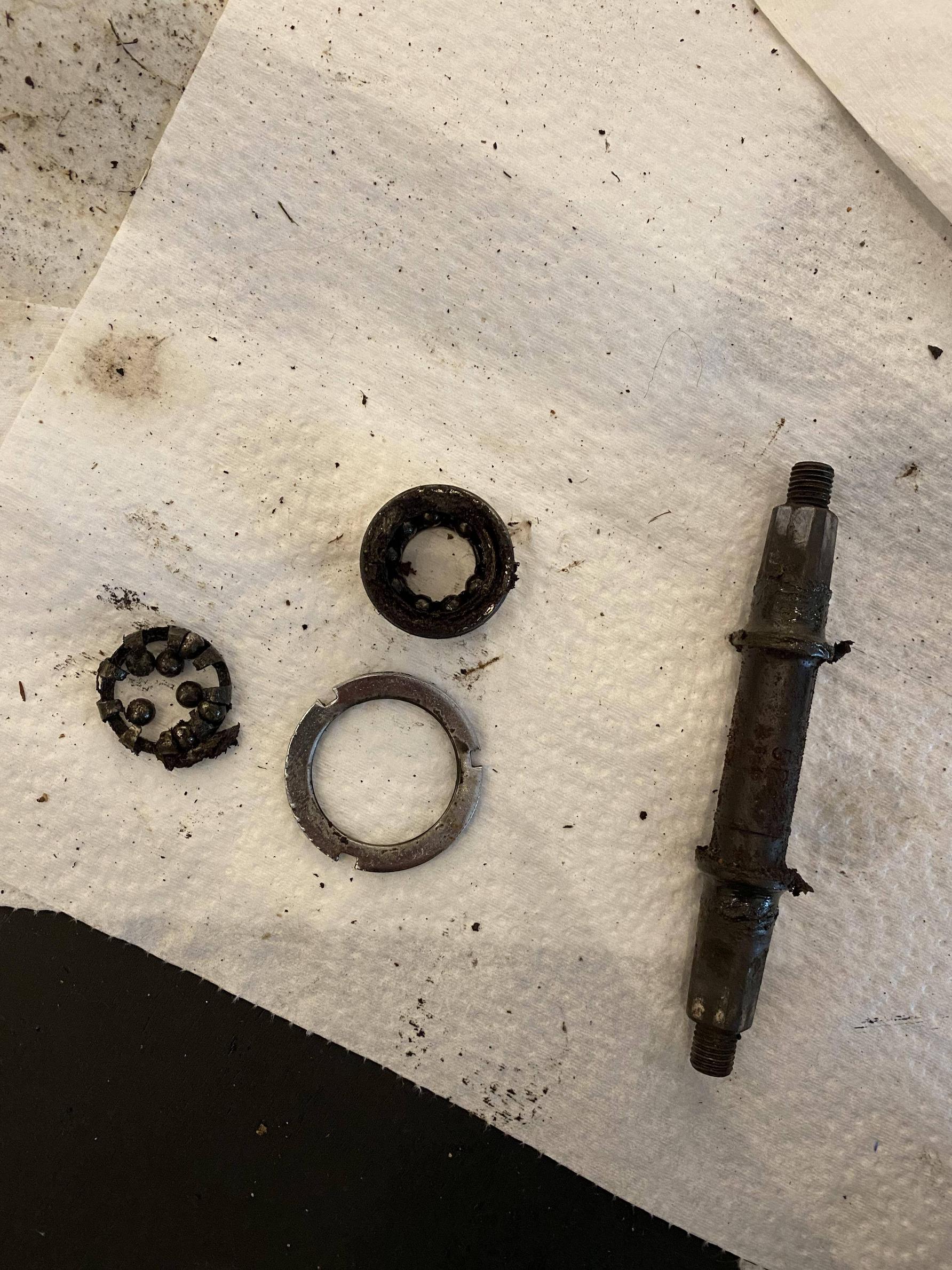 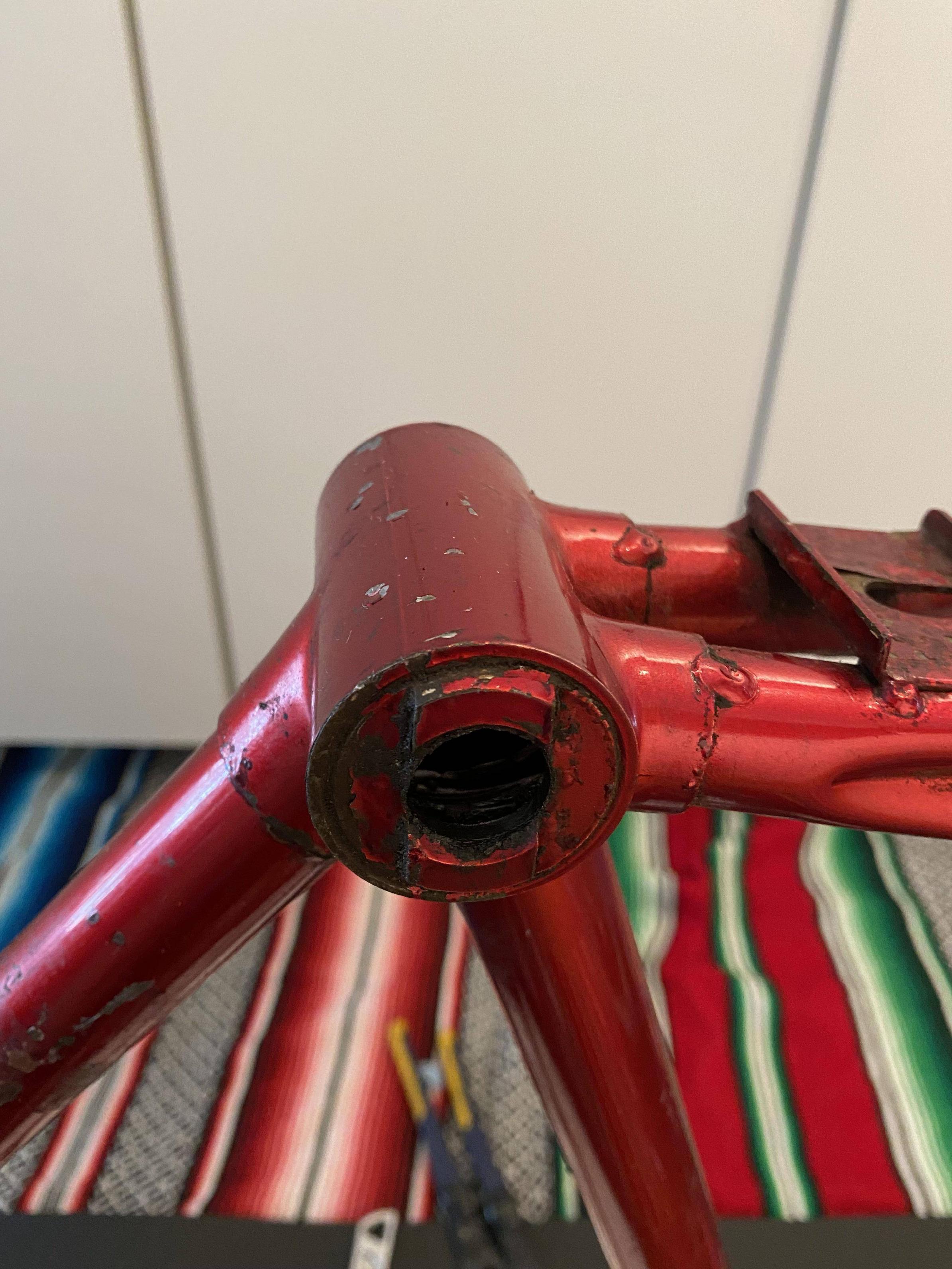 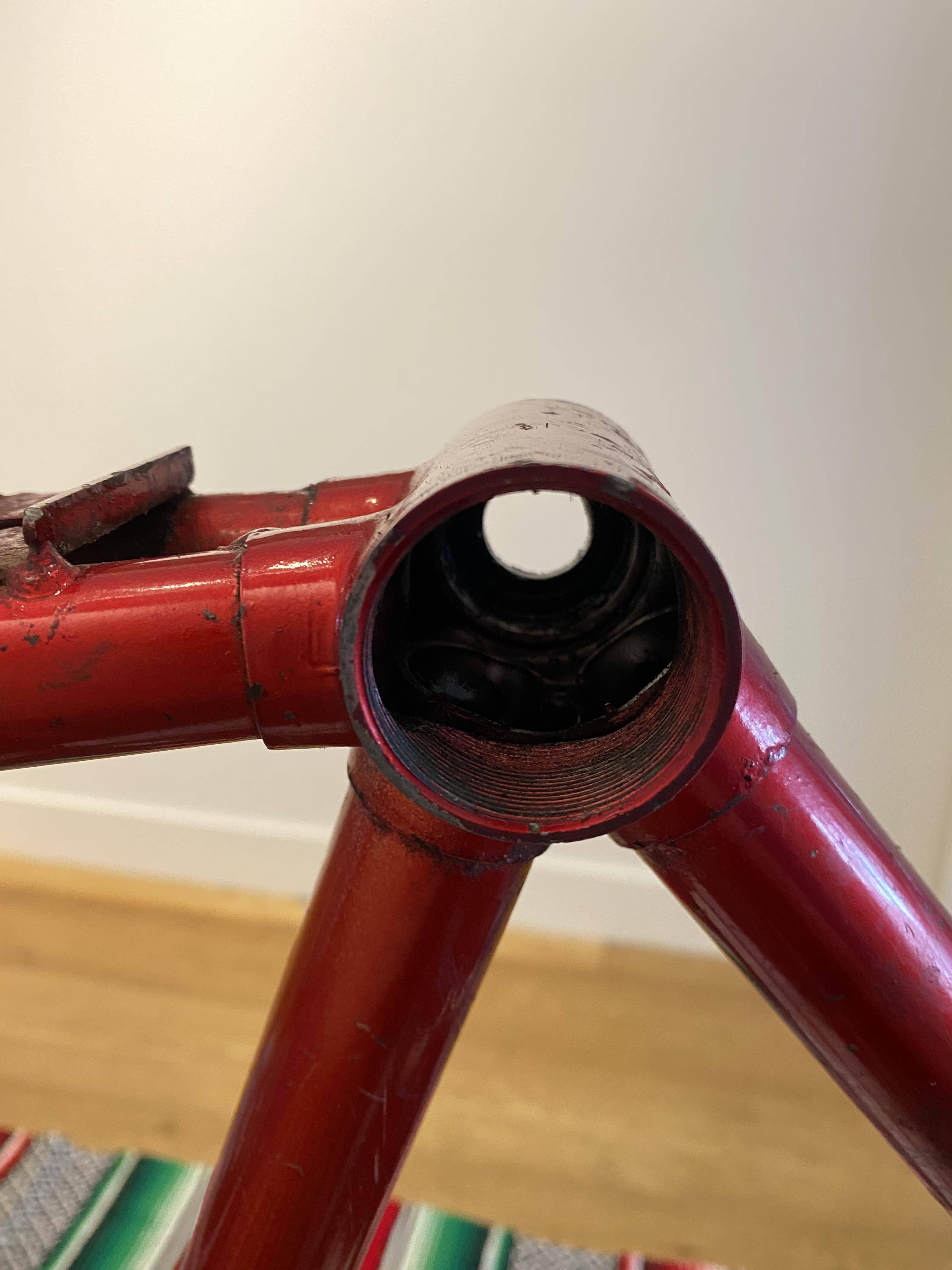 There's nothing integrated there - instead, there is one cup still in the frame, and it has been painted red at some point.

You'll need either a careful hand with a large spanner to remove it, or to get the correct tool which is something like a Park HCW-4 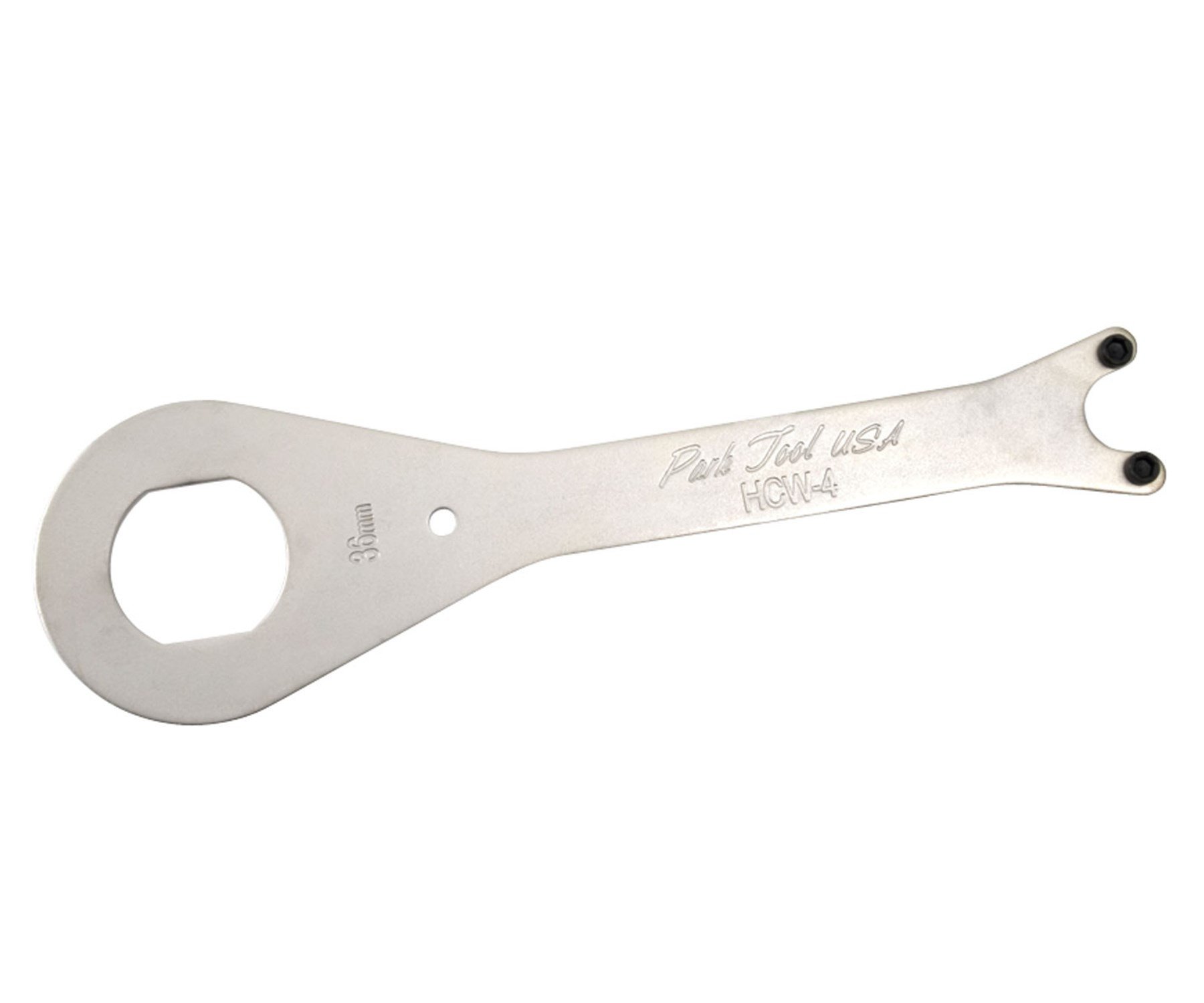 It can still slip off, so you might get best results by removing the paint from the cup with a steel wire brush, both at the tool interface and around the seam where it meets the frame.

There's also a chance its left-hand thread so inspect the visible threads carefully to determine that.

Do note the BB cartridge uses a different tool interface, so it might not be worth buying this for a single purpose. There are bike cooperatives who can help, or destructive removal (though the cup is hardened steel, difficult to cut compared to the softer frame) or ask around any cycling friends to see if they have the right tool. I do.

A replacement square BB cartridge will suit you perfectly, something like a BB-UN55 or a BB-UN300. The different versions are in the spindle's length which directly relates to the chainline, and since you're talking about transmission conversions then this is the chance for you to get the "perfect" chainline by measuring the right distance. But that's a different topic. 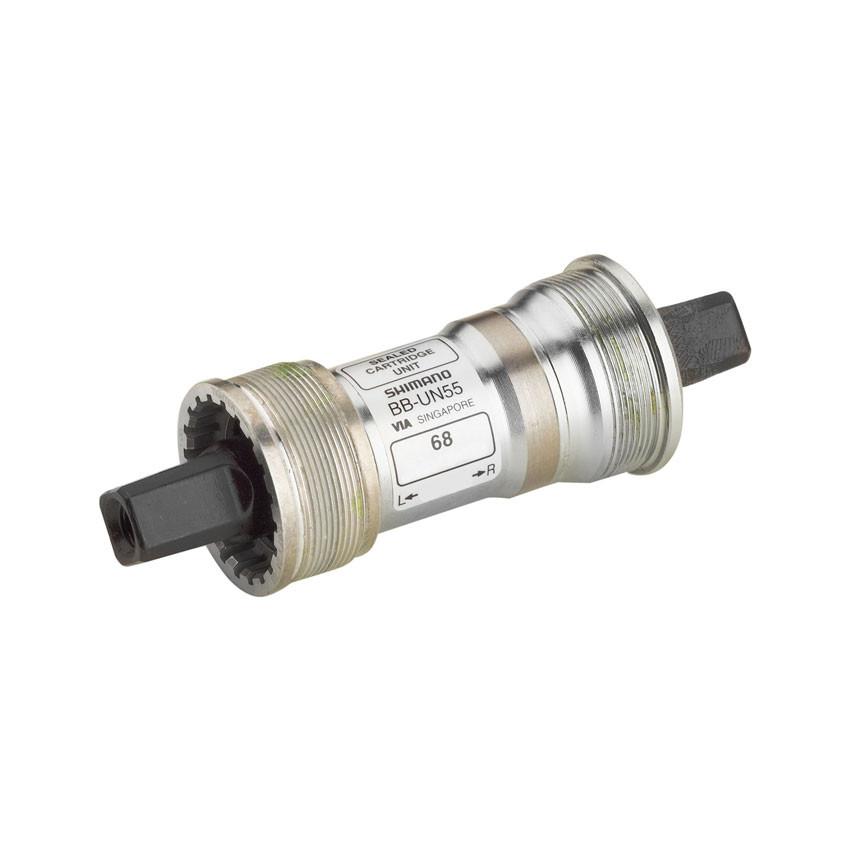 As so often, Sheldon Brown had straightforward good advice on removing such a fixed cup: https://www.sheldonbrown.com/tooltips/bbcups.html From his link:

He cautions about approaches to avoid: (including use of the thin wrench with 2 flats shown above, I believe):

Fixed cups have wrench flats, so you might think a very large wrench would be sufficient to remove the cup. Not so. The cups are screwed in too tightly, particularly since the wrench flats are only about three millimeters wide-too narrow for a wrench to get a good purchase on the cup.

Very elaborate, expensive, and special tools are sold to bicycle shops for fixed-cup removal and installation, but they are not really necessary. A few cheap home remedies can do the job quite well.

Vise use, as suggested by @BeginnerBiker :

The first home remedy demands that you have a high-quality bench vise. Simply grab the fixed-cup wrench flats in the vise jaws, making sure that you have good contact with all of the wrench flats' meager width. Grasp the bike frame and unscrew it from the cup. This technique works quite well.

Otherwise, the approach I used:

If you don't have a bench vise, or if the vise technique happens to not work well on your bike, you can make a universal fixed cup tool for less than a dollar (assuming you have access to a couple of large wrenches).

The tool is an imitation of a $40 shop tool that fits into the fixed cup as a crank spindle would, and pinches the cup. You apply unscrewing force to the tool, and it transfers this force to the cup with this tight friction fit.

The tool consists of a large bolt, a nut or two, and a few washers. The size of the bolt is not particularly critical, as long as the bolt is strong enough not to break, but small enough to fit through the hole in the cup. I used to use an ordinary 1/2-inch, 13 TPI hex bolt (also called a "cap screw"), which served me well for quite a while. It finally met its match on friend's Schwinn that had an unusually tight fixed cup; the bolt snapped in two before I could remove the cup.

Now I use a 5/8-inch 18 TPI hex bolt 1 1/2inches long, with a nut, a flat washer, and four lockwashers. The 5/8-inch size is the largest standard size that will fit through the hole in the cup. This bolt and nut both take a 15/16-inch wrench. With my 1/2 inch drive Craftsman six-point socket set, the 15/16-inch socket is also the largest size that will fit into a normal bottom bracket shell.

If you have some other brand of socket, check the fit before you buy the bolt and nut-you might need the next size down (9/16-inch).

Home-made tool shown in cutaway bottom bracket cup. Nut on the Outside

To remove a right-threaded fixed cup (French or Italian), tighten the bolt with the socket wrench from the inside of the bottom bracket, holding the nut with the box wrench. Once the bolt is as tight as can be, keep on tightening it, until the cup screws itself out. Once the cup starts to move, turn both wrenches together.

To remove a left=threaded (British, Swiss or Raleigh) fixed cup, hold the bolt with the socket wrench and turn the nut with the box wrench.

Use the same tool the opposite way to install the new fixed cup.

You might worry about damaging the cup, but this is not likely to happen. The washer doesn't usually come into contact with the bearing surface. Even if it did, bearing cups are made of extraordinarily hard, heat-treated steel, much stronger than that used to make washers.

PS - the bolt, nut and washers probably costs a few dollars these days.

If you have a vice, flip the bike so that the nut you want to take off is facing down and fit it into the top of the vice. Tighten down the vice on the nut, add some heat to the outside casing with a propane torch and twist off the nut using the long leverage of the frame. You may want to remove the wheels beforehand to make this job easier.

You can use a adjustable wrench or go to your local bike shop and they might just do it for free. My bike has the same thing but I had the opposite side stuck and the bike shop took it out for me.

Not the answer you're looking for? Browse other questions tagged bottom-bracket fixed-gear diy or ask your own question.