How to find routes [closed]

Questions seeking product/service/learning material recommendations or item valuations are off-topic because they tend to become obsolete quickly. Instead describe the situation or specific problem you are trying to solve, or try chatting about it in The Velodrome.

I've frequently travelled to school by bike in the last few years. Now I would like to start riding my bike just for fun, i.e. not only to get somewhere.

The problem is that I don't know how I can find any routes. If I had a specific location to get to, I could use Google maps etc. to find a route, but I basically just want to drive around somewhere.

How should I go about finding a route? Are there perhaps apps or online tools where I could enter how much I would like to travel (roughly) and I would then get a route which would eventually return me home (for context, I am primarily interested in small routes that can be completed in one to a few hours – not several days, for example)?

If it is relevant, I live in Germany.

You could use Komoot, which is an app and a website which can give you recommended rides around your area and you can plan your own.

On the discover page of Komoot you can search routes in your area and/or filter by region and categories (seasons, type of biking, etc...)

For Germany, the go-to answer is to buy the ADFC-Radtourenkarte for your region, and use that to get ideas where nice bike routes are located. The advantages of these cards are numerous:

Please note that I am not affiliated with the ADFC: I am simply a cyclist who has used these maps in the past, and found them to be extremely useful for my purposes. You can buy these maps in any German book store.

An approach that works well if you have a good memory.

Just go out and ride. Memorize the route while riding. When you feel like you don't want to ride more than the same distance again, just turn back and ride the same route in reverse to your home.

Next time, you can start in the same route but turn differently in some turn.

Gradually you'll start to build a memory of the area. Eventually you'll reach the situation that you notice that hey, you've been here before but rode on a different road on a crossroads. Then you have plenty of options on how to continue the route -- at such a crossroads, you know how to reach home without turning back and riding the exact same route in reverse.

I don't know about Germany specifically, but I used to use Strava for finding places to ride. If you have an account, you can go to Explore and select Segment Explore. You can move around the map and it will show you segments that people have uploaded. Its a good way of finding popular places for cycling, although they can often be places where people go to train, so they may not always be suitable for casual riding. There can also be popular commuter routes as well.

At one point they made a heat map of cycling route people regularly uploaded, but I can't find it any more; perhaps its a paid feature now.

Another option is RideWithGPS which shows similar things, again on a map.

I would like to add CyclOSM to the recommendations: https://www.cyclosm.org/ This layer for Open Street Maps will show you a lot of useful information for planning your own bike tours.

If you also want this layer paired with a router you can use: https://bikerouter.de/

A router is a program that finds a route according to your preferences. Here you can read more about how to use it: https://www.marcusjaschen.de/blog/2020/tips-for-using-brouter-web/

When I got back into cycling, I would find a destination with some reason for going there, and as long as I wasn't moving something large/heavy/fragile, then the bike was a valid solution.

With a start/end and a single waypoint I could then look at the roads joining the two points, and pick out features to avoid (motorways/highways, certain intersections, large hills, gravel roads) and features that could be enjoyable to ride.

If there were multiple links, I'd look to either ride two different sets of roads each way, OR if it was a particularly long trip I might choose to ride the same route back on the basis that the return trip always feels shorter if you've ridden it before.

Weather and prevailing winds may play a role in deciding one's route - going out with a tailwind, stop for lunch, having the wind turn around and getting a tailwind back home is awesome. The opposite is unpleasant - riding into a headwind to get a headwind home is less-fun.

As a tie breaker, I will sometimes pick roads I haven't ridden before. If you log with Strava, there's an external web site at http://www.jonathanokeeffe.com/strava/map.php which takes your activities and overlays them on a map.

So I look for roads I've never ridden before, and incorporate them into a route.

Two websites I use to find routes are RideWithGPS (for road and off-road rides) and TrailForks (for mountain biking). I've also used RideWithGPS to plan my own routes; I'm not sure if TrailForks can do something similar, I just use it to find trails.

I just checked, they both have rides available in Germany. Both websites are also available as mobile apps.

If neither of these are a good fit for you, there are others like MapMyRide and Strava, both of which also have mobile apps. I have friends who love them, but I don't know enough about either one to have an opinion.

I suggest you to have a look at brouter.de . Not immediate, but extremely useful and based on OpenStreetMap data, it allows you to correctly consider (possible) heavy traffic and ground quality (tarmac, gravel, bare earth and roots? all these infos can be made available).

Openrouteservice has a function for "Round trip routing". This service will suggest a randomly generated (roughly) circular route. The user states where they want to start, how for they want to ride (or hike, drive, or even wheelchair), and optionally configures a random seed (for reproduceability). Openrouteservice then figures out the rest. For example, for a 100 km route from central Erfurt with 8 points and random seed 24, it comes up with this route: 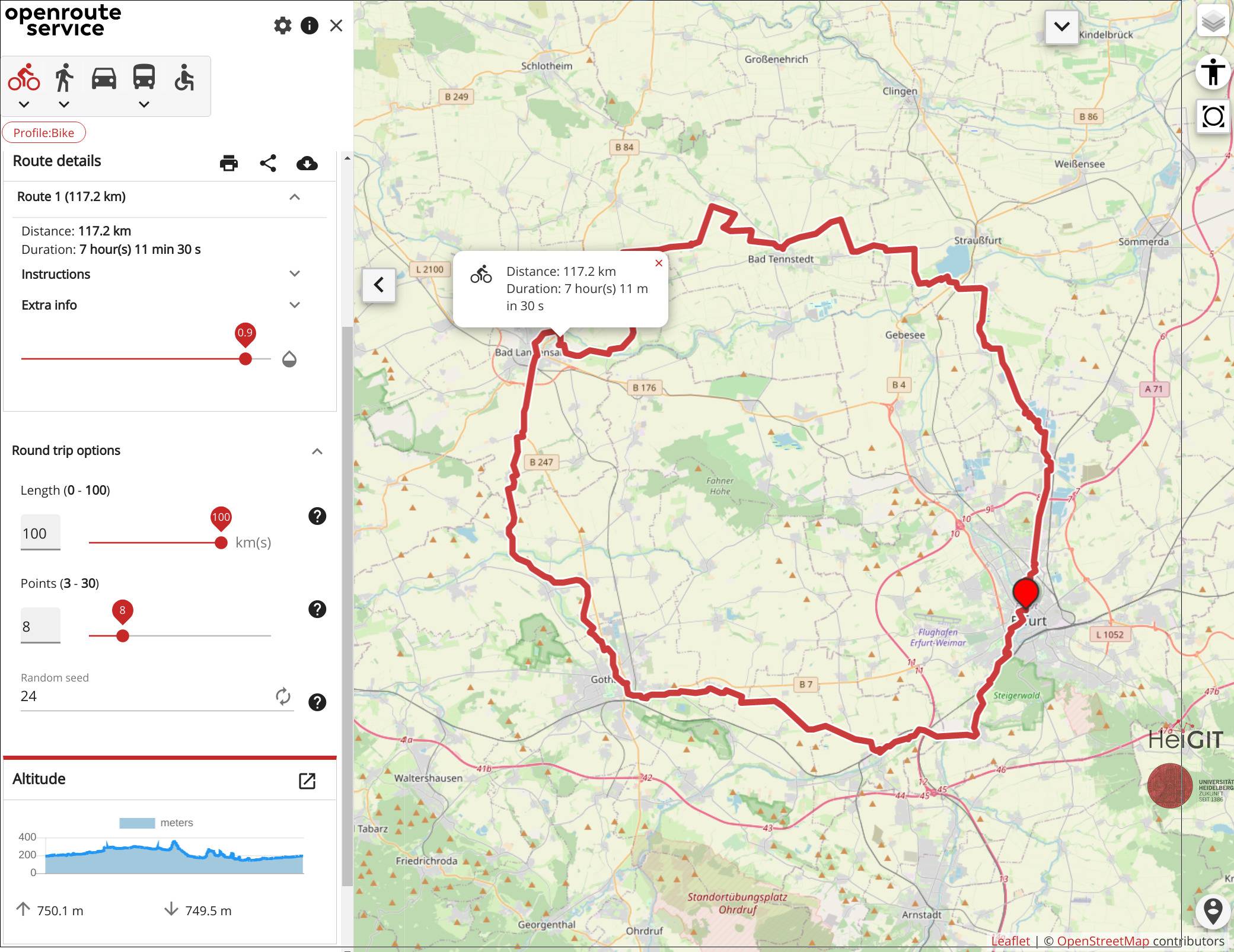 You can download the GPX track and use it in your mobile navigation device, or just use it as inspiration. I've used it a couple of times. I find it's a nice way to get to know new places, but it doesn't always select routes that are particularly nice, so I would use it in combination with a good map and take a slightly different route if it looks more scenic (for example, it may spend a long distance on a bike path running alongside a major road, when there's a slightly longer route through the forest along a small river).

While some groups are closely linked to fast clubs, others are much broader, and more open to all cyclists in the area.

There's a collection of well curated and well presented routes around London and the south-east of the UK at https://www.routes.cc. I have done a couple and would recommend it!

I took a trip to Europe a few summers ago and wanted routes to run in each of the town/cities I visited.

I used Google maps to find the location of where I was staying, then to explore the area looking for likely looking roads. Since I was running, not cycling, I looked for things like parks and sidewalks instead of lightly trafficked roads and bike lanes, but the same theory applies.

Once I found a route that was the approximate distance I was looking for, I went into street view to ensure that the neighborhoods I was planning on visiting at least looked decent (there are a lot of places in the US where you can tell just by looking that it's probably not safe for a stranger in running/cycling attire to be passing through early in the morning).

I then printed out a map of the planned run. When the day of the run came, I did my best to commit the route to memory and off I went. I did get a bit off my track in Segovia, Spain, but managed to make it back "home" just fine. All my other routes I managed to run according to plan.

If you're simply exploring around the area you live, just get on the bike and explore! You should know your area well enough that even if you take a wrong turn somewhere you should be able to work your way back to a main road that you recognize in only a few minutes.

Take some sort of GPS tracking device with you - I've used Strava on my phone once or twice to find my way back, even when I was running near my office, missed a turn on a new route and ended up somewhat misplaced. The funny thing is, that ended up being a much better route than what I'd originally planned.

Not the answer you're looking for? Browse other questions tagged advice bikeroutes planning navigation or ask your own question.

18
Where can I find local bike routes?
4
How to plan routes for touring?
0
Best bike routes in Brooklyn
8
Is it possible to find the actual GPS coordinates of roads, rather than the surface they're on?
4
Navigating to a saved location on a Garmin Edge 530 results in a ludicrous circuitous route
20
How can I keep improving after my first 30km ride?
3
Brisbane - Logan cycle route question / How to find/ask about good cycle routes in certain areas