I bought a cheapish (£350) hybrid bike to use during lockdown.

I covered about 350 miles (560 km) on tarmac and pavement. 8 months ago i was riding, about 11k into the journey and was on a tarmac cycle path.

Next think I knew was when the paramedics were bringing me round. It seems the front wheel skewer snapped. There's a slight bend in it with a small piece still secured in the nut. Seems the wheel came clean off and I hit the ground at 15mph (24km/h) according to my phone app.

I received a fractured neck- c5 and c6, facial scarring, whiplash to neck and back, concussion and general bruising. I still have physio and possible scar correction operation.

I have no recollection of what happened. The bike was in new condition and was riding normally with nothing untoward.

Has this happened to anyone else? 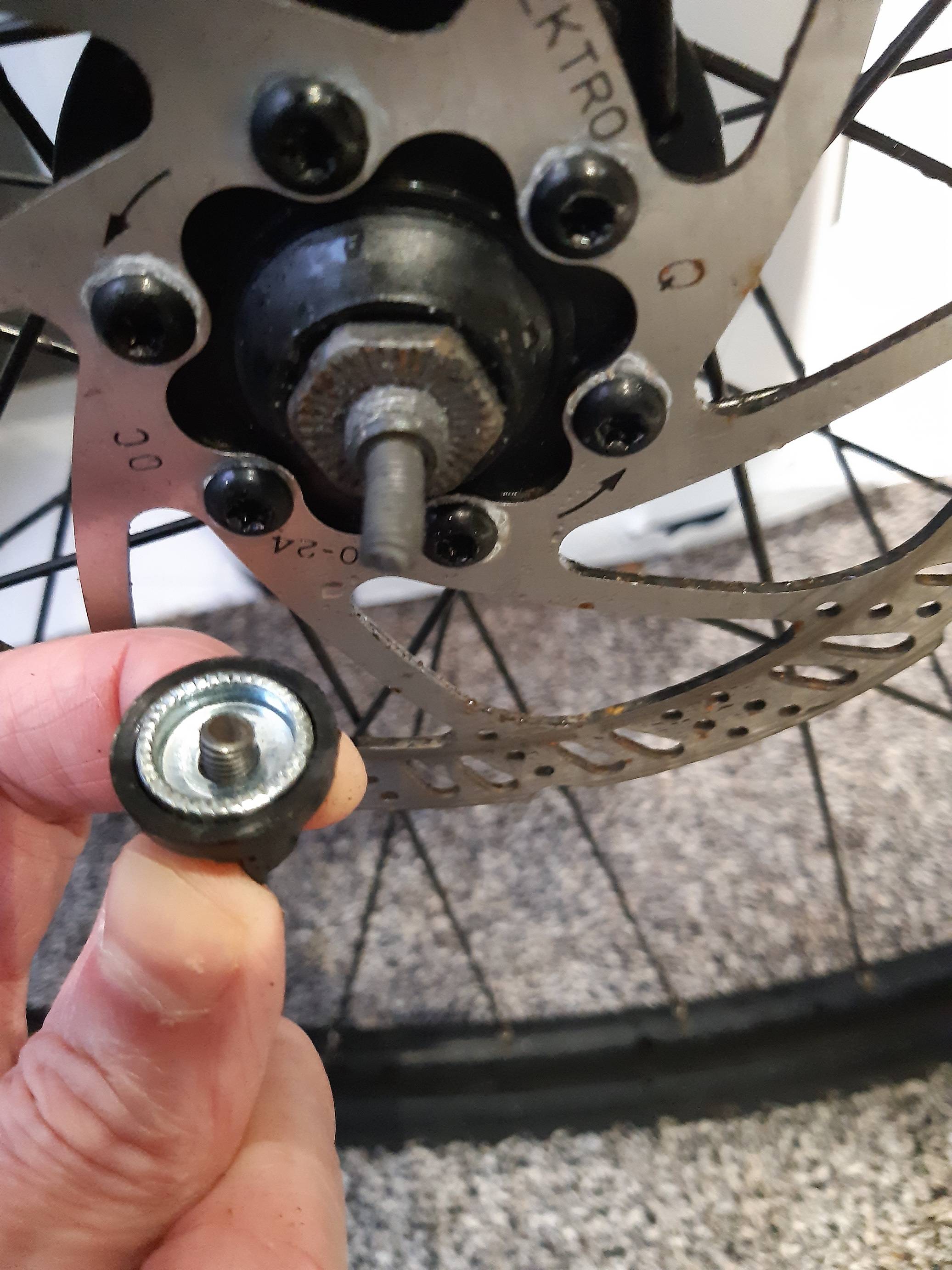 Thanks for adding the photo. Obviously, it's hard to be certain from afar, and you don't have a first hand account. You seem to have been told that the front skewer rod snapped. If it snapped, it would have let your front wheel come out of the fork, which would cause a crash.

Bikes do have little lips on the fork ends to reduce the probability that the wheel comes out suddenly if someone doesn't tighten the skewer properly. They're called lawyer lips. Presumably they didn't work here.

I don't know that data on failure rates is public. It does seem odd that the skewer rod snapped. To my knowledge, the skewer clamps laterally, and I think it doesn't take much vertical stress while you're riding or if you hit a bump. The wheel axle, which you slip the rod into, is the component that should take that load. Also, on a cycle path, you shouldn't be hitting any bumps big enough to bend an axle (likely steel, possibly aluminum or titanium on high end bikes, but those shouldn't get bent just riding on a path either). In any case, if the skewer did precipitate the crash, then it seems likely that it's a quality control failure of some sort. I don't know for sure, but I would guess that it could be possible to break a rod by overtightening the skewer - except you would have to crank down really hard, and I'm not even sure that many skewer cams could generate enough force to make the rod fail (probably the skewer cam would fail first).

If I am correct, then I think you might want to think about contacting a lawyer. Be aware that fault might be tricky to prove conclusively in a civil court proceeding. Your side would probably need to show that the bike wasn't assembled or maintained negligently - and I'm not sure what that could entail. Also, you could have had the skewer loose when you set off for the ride, and I guess it's possible it could have broken in the crash, rather than causing the crash. However, I believe a personal injury lawyer would at least assess your options for free.

I am not a qualified accident investigator

A skewer snapping sounds more like a result than a cause. The skewer holds the wheel in place, and breaking is a consequence of some other event.

I would get an impartial person to inspect the bike closely, and document what they find. Don't fix anything though.

I'd also get a very clear macro photograph of each end of the broken skewer to see if it shows anything, like "tide marks" or if its all one clean break.

Were there witnesses at all? Who called the ambulance? Did they see what happened? Are there any traffic cameras or "public safety" cameras in that spot ?

Looking at the photo, the skewer has clearly parted. At first I thought "that's a lot of skewer sticking out of the hub" then realised that the wheel is not in the fork, so the extra length visible is what would be passing through the fork dropouts on both sides.

The tip of the skewer is interesting - looking at the break I can see:

We can see a clear delineation between the Blue shaded area and the part closer to the thread. I would guess that the Blue-shaded area is rusty, and the other part is cleaner - because it only recently gave way while the blue part was damaged for a while.

Estimating from the depth of thread visible, this parted in about the middle of the dropout, about exactly where the axle-tube ended.

So my guesses would be one or more of:

At that point the whole front wheel twisted sideways in the frame, bound-up against the fork and stopped suddenly. The rider still had momentum which continued and pushed you over the bars.

I would guess that you hit the ground face-first, and your hands/arms were scraped up from instinctively trying to protect your head. Presumably you were wearing a helmet which minimised the shock to the skull/brain and kept the impact from being even more severe. If you weren't wearing a helmet, you're amazingly lucky for not be more-injured.

Obviously you need to heal first. Get a medical opinion of fitness before progressing - an injury on an injury is more than twice as bad.

You need a new helmet too. Dispose of the old one, don't keep it as a "spare"

Mechanically your bike needs a new quality skewer. However in your position some reluctance to use skewers is reasonable. For confidence reasons, I'd suggest replacing the hollow QR axle with a solid axle that uses ~15mm nuts on each side to secure the wheel.
A more-expensive solution is to replace the wheel/fork with one that uses a through-axle. These are essentially a large special bolt that replaces the axle and uses sealed bearings.

Proceedurally, a periodic once-over of the bike should show looseness before it becomes a problem. A monthly "M-Check" is a great idea, where you push/pull things, twist, spin, squeeze and shake to look for badness.

Don't let this event put you off riding. QRs are normally quite safe.

From the photo it looks bent, not just pulled apart from over-tightening. It also looks a bit like something rested on the skewer and abraded it (where it comes out of the axle). Was the axle really seated in the dropout? It also looks like a lot of skewer sticking out.

I think in general there is some advice against using quick release skewers on front wheels with disc brakes. If you use them, make sure to get some good skewers, make them tight but not too tight and check them regularly.

Not the answer you're looking for? Browse other questions tagged accidents skewer crash or ask your own question.

6
What's the benefit of a titanium skewer?
4
Security wheel skewers for front facing horizontal dropouts
2
Locking Skewer slipping from rear wheel dropout
10
Where do springs on skewer go?
2
Rear skewer spacing
5
skewers - how to measure length of existing skewer?
4
Replacing rear solid axle with skewer
2
I can't find my skewer that came with the trainer. Can I use my bike skewer?
1
Tacx QR Skewer Alterantives
4
Can the trainer damage my bike's skewer?