How to choose a bike for a very tall and heavy person?

We are going in and out of lockdown in Australia and I think a bike would be a great way to keep my cardio up while gyms are opening and closing.

My question is, will I destroy a bike? I have gone into my local bike shop and they have said that a bike with dual suspension will be my best bet as they can dial it up for me. I have also seen that having double walled rims and fatter tires is good too.

Am I wasting my money? I know there is like fat guy steel frame bikes but they are not available in Australia, cost way more, and seem to have worst components than a basic MTB from the local shop.

I am just going to be doing riding around my streets and maybe some very very light bush trails, nothing crazy or with jumps, please please please give me some direction because I am getting this bike in 2 days and need some advice, do I go for it or do I save my money and just keep walking? 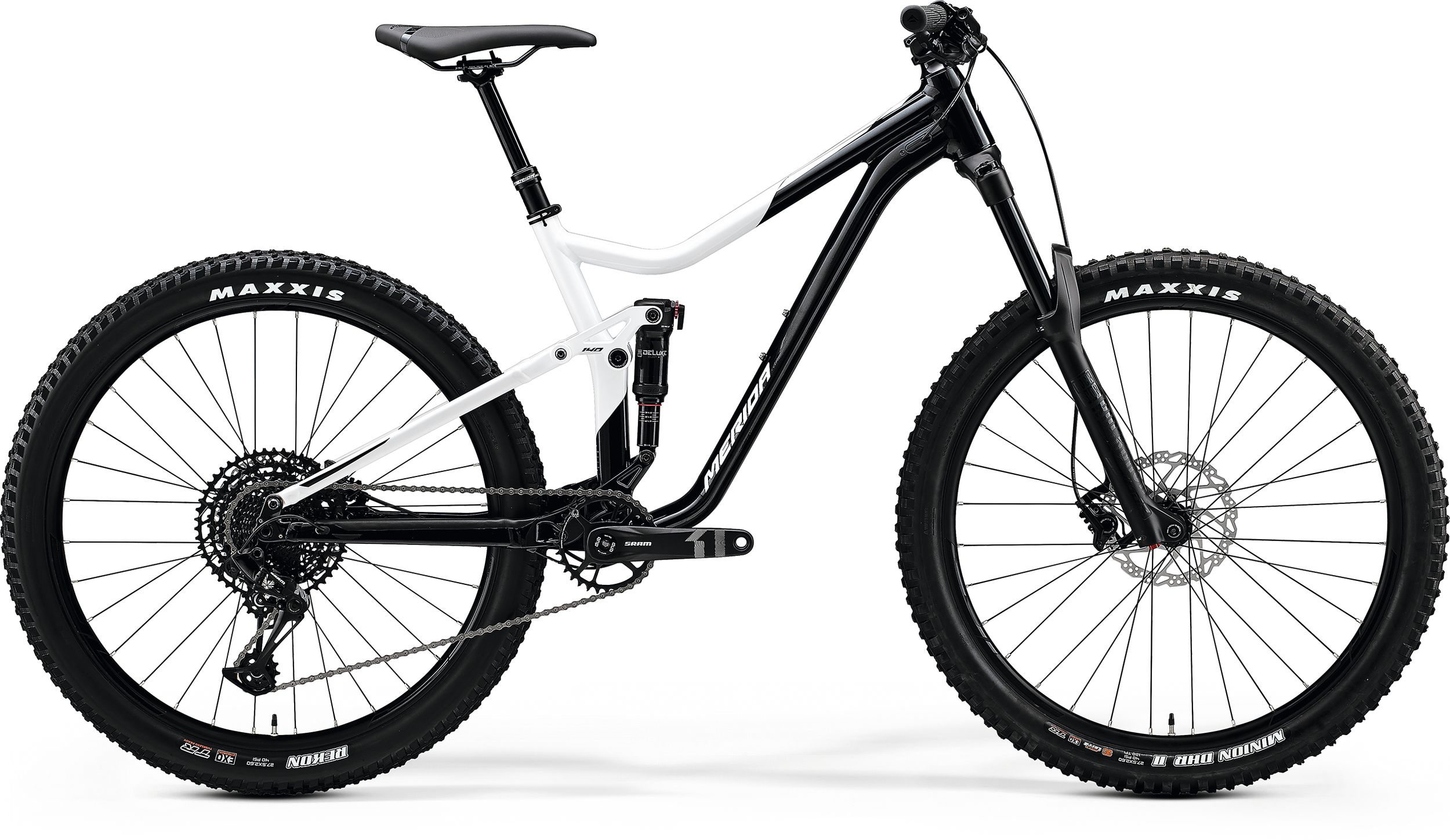 Stock photo of the Merida bike.

It would be easy to waste money by getting something too basic, but hopefully the above gives you some ideas for how to get into something functional without spending a ton.

The weight limit on a bike frame is the loading at which a manufacturer can deny warranty claims. So this Merida won't fail suddenly at 121 kilograms, but it will likely suffer from more punctures than normal, and potentially more broken spokes. Also, the brake pad life will be shorter than an average rider would experience due to more kinetic energy (momentum) to be dispersed.

If you plan on loosing weight then this bike might be a good start, though do remember to give it a periodic safety check before every ride. (Search for M-Check)

If you're intending to use a bike to maintain general fitness, and expect to stay around the same weight then it could go either way. Either this bike is insufficient and you need a custom-made frame, or you ride it carefully and avoid jumps and potholes and kerbs/curbs.

In my experience, the frame and forks are not the failure points. When static load (rider and cargo) rises the bike "wears" faster. When dynamic loads spike up (potholes, any kind of sudden event) that's when things break. And the first thing to fail is normally a wheel, frequently the rear wheel because it carries 60~70% of the load. Punctures are more common with more weight too.

Separately, don't confuse "fatbikes" with 100mm wide tyres for bikes having any higher load capacity. A Fatbike is primarily intended for sand and snow and shingle, where a wide footprint helps maintain grip.

There are bike frames designed and built for heavier riders (who are sometimes called clydesdales ) For example https://zizebikes.com/zize-bikes-for-riders-over-400-lbs/ but as you note, they're not cheap. No affiliation.

(general comment for future readers) I'm not sure how Australian healthcare works, but if there's a medical condition involved, there are schemes that supply "enabling equipment" like scooters, crutches and build ramps/showers into homes. It is possible that a high-capacity bicycle could fit in this scheme and be subsidised by healthcare.

TL;DR Get the bike if its not too expensive. Can't start if you're always waiting for the perfect thing. If something fails, replace that thing with better. Expect wheels to be early, so get good high-spoke count replacements at the time. Learn to fix punctures, and carry spares for roadside repairs.

You can ride a bike - make a start and the rest will follow.

Thank you all for your responses, it was very very helpful.

It has become clear to me now as to what I need to do and I am going to be buying a Zize Bike - Yonder.

It seems to have everything I will need right off the shelf: stronger disc brakes and frame, as well as a stronger seat post and gearing. It is a little stretch out of my budget, especially considering I will need to ship it to Australia but I feel in the long run it is well worth it and it seems like they have a very good warranty specifically to do with weight breaking things.

All the reviews and what I have read online seem to be very positive besides the price but I guess when you are making a very niche thing, you can charge what you like.

I would be looking at a steel framed touring bike with handbuilt 36-spoke wheels. For example Surly Long Haul Trucker (sadly, not available anymore but you can buy the Disc Trucker even today) is rated for 136kg rider and 25kg cargo for 161kg total carried weight. That's in the right territory even though you still exceed it by a bit.

Most bikes come with wheels so you'll at least want to hand the existing wheels to a professional wheelbuilder to touch them up, ensuring they are fully stress relieved, and have even and high spoke tension. Even then, I would be very careful when riding the bike, using high volume low pressure tires (the thickest you can fit) and riding over curbs very carefully. If the spoke nipples tend to loosen and making them evenly and highly tight won't prevent nipples from loosening, you may have to resort to using threadlock on the spoke-to-nipple interface threads. Note that threadlock is still not a substitute for quality-built wheels and often suggesting applying threadlock needlessly is a sign of a poor wheelbuilder, but even quality professional wheelbuilders may have to resort to threadlock in some speciality applications like really high system weight.

I'm bit below 110kg. I know that a rather weak framed Cannondale Synapse Neo EQ e-bike that weighs over 20kg and can carry 16kg cargo withstands my weight. That's about 146kg system weight. In your case, the system weight for a standard non-e-bike would be about 225kg, even more if you carry cargo.

I use 28mm high pressure tires pumped up to 7 bar even at 146kg system weight. If you select for example 40mm tires pumped up to 5 bar, such as Schwalbe G-One speed that are rated for 100kg, you should be reasonably safe. You still exceed the tire load rating because most of the load is on the rear wheel so the rear wheel will be carrying perhaps about 140kg load. But if you ride carefully, that should not be an obstacle. Remember to pump the wheels up every single week, because bicycle tires leak pressure quickly and ordinary riders may have to inflate only every other week but in your case the margin between acceptable pressure and maximum pressure the tire supports is practically nonexisting.

Most likely even though you are heavier than ordinary, your arms probably aren't much stronger than ordinary, so most of the weight is carried not on the handlebars/stem but rather on the seatpost. Thus, select a two bolt seatpost where the failure of a single bolt won't make the seat loose. Ideally the seatpost would have polished smooth, not anodized surface, because polished components have higher fatigue endurance. I would also not ride without mudguards and rear rack -- if your seatpost fails, your butt will hurt a lot from the spinning rear wheel onto which it falls. The mudguards and rear rack cover the spinning rear wheel. Also I suspect you need a really big honking seat collar because your seatpost WILL slip. Surly Constrictor is one that's compatible with Surly Long Haul Trucker and I suspect Disc Trucker too.

Inspect your high load components often for beginning cracks. That includes in your case very dense inspection schedules for at least seatpost, cranks and fork. You might to want to keep an eye on the handlebar and stem too, although I suspect they won't receive much of the extraordinarily high load. The fork should be pulled regularly and have its steerer tube inspected for fatigue cracks. Similarly don't just eye externally the seatpost, rather pull it from the seat tube, regrease and reinstall. Might be good to check the welds of the frame often too. Usually, for riders with ordinary weight, frame failure won't cause the rider to get hurt, but in the case of very heavy riders, it's possible if one weld fails the remaining welds can't withstand the high weight and fail too immediately at the same time.

You'll wear out the wearable parts -- chains, cassettes and brake pads -- very fast. Keep a stock of spares. Also bottom bracket is something that can fail at any time from the high weight so keep one at spare, and if you don't want to stop riding waiting for a replacement seatpost or crankset to arrive one of each in spares should prevent that wait. Hub bearings might wear faster than ordinary from the high weight too. I suspect that cup and cone bearings, being full complement, last more than standard industrial machine bearings that are half complement.

Then there's the braking problem. Normal weight riders can usually brake so hard using only the front brake that the rear wheel rises into the air. You probably have to use both brakes at the same time, because otherwise you won't get enough braking force. The low mechanical advantage and flex in bicycle brakes otherwise would prevent an acceptable braking force.

A German manufacturer has a model rated for 200kg max rider weight. At about the same price, the specifications are of much higher class (the bike itself weighs 18.5kg, compared to 24kg). You'll also get the full range of gears with front triple, which makes the bike more versatile - you'd be able to do mountain riding on it in case you get into it.

Not the answer you're looking for? Browse other questions tagged mountain-bike frames heavy clydesdale or ask your own question.

9
How to find a mountain bike that can handle a heavier (250-260lbs) rider?
3
Bike suggestions for a heavy rider
2
How to identify a MTB for heavier riders?
0
Bicycle for fat man

3
What should I look for in a new front wheel for my heavy body?
3
Could I have deformed the wheel of my new bike by being too heavy?
5
Setup for heavy rider and DB 29" overdrive
3
How to choose a bike
1
Am I over weight for this bike I bought
3
Identifying features of a mountain bike specific to a tall and heavy rider?
2
How to identify a MTB for heavier riders?
1
Mountain Biking with Heavy Rider and Rigid Bike