I have just recorded two following activities (I am 42 years old and seriously fat / 108 kg):

Is this kcal burnout on second activity accurate / possible? Only 837 kcal when compared to 1,220 kcal on hiking?

Here is a Strava's (no power meter) screenshot from my hike / walk:

And here is the second activity (bike riding):

For me it was:

How can I burn much less (only 70%) kcal on a really tough bike ride when compare to fairly moderate walk? What am I missing here?

EDIT: To clarify after a great number of even greater comments. Both numbers and "fast" wording are just to underline the difference here. I am not challenging each single kcal burnout on its own. It is only very hard for me to believe / understand that during a fairly simple walk I supposedly burned out 150% of the kcal that I burned during a bike ride from which I returned totally wet and "wasted".

So the real question could be: How can I burn way more calories walking than I burned during biking?

Since the other answers and comments were discussing only your bike trip, I will tackle on your hike values and show why they are probably incorrect.

First of all your activity wasn't a hike, but a walk, since 90m elevation in 9km is just ~1% elevation on average. This distinction could be important if you are using apps like Google Fit or similiar for the calculations of your calories. Depending on what activity you select, it will calculate different values based on some average values they have for these activities and there is a big difference between a hike and a walk.

So let's say you made your walk of 9km in 80 minutes, which is an average speed of ~6.77 km/h. This page (in german) shows a table of calories burned based on your weight and speed of walking. With 100kg and a walking speed of 6.5 km/h it shows 450kcal burned. So in 80 minutes you would burn around 600kcal and if we adjust it to your weight and some elevation you would probably end up at around 700kcal for your trip.

I also found a calculator for calories burned by walking and if I put in your data there I end up with roughly the same value of ~700kcal. So it is safe to assume that your 1,220 kcal are incorrect and to high. If you are using Google Fit or a similiar app, I would suggest to check what activity is logged for this trip and if it is "hike" change it to "walking" and it will recalculate the values and maybe show lower values with are closer to the calculated ones.

The bicycling calories sound about right (maybe a bit too high, but assuming a relatively bad bicycle and higher moving speed between breaks it could work). I think it’s your walking calories which are overestimated. Where did you get the estimate from? Most calorie calculators estimate around 600kcal for your hike, for example this one says 600kcal when set to 6.4km/h and 180cm height: https://keisan.casio.com/exec/system/1350891527

Are you used to bicycling? Is your bike set up correctly? Did you use easy enough gears for the climbs?

For comparison, here is a screenshot of a casual training ride I did a month ago with a power meter. I’m a 67kg, 1.8m male and used a 7kg road bike for this ride. The ride is about twice the distance and elevation of yours, took a bit more time and burned 1010kcal (fairly accurate estimation because of the power meter). The first and last 4km are slow because it’s in the city. I’m physically active but couldn’t train much this year due to injuries. 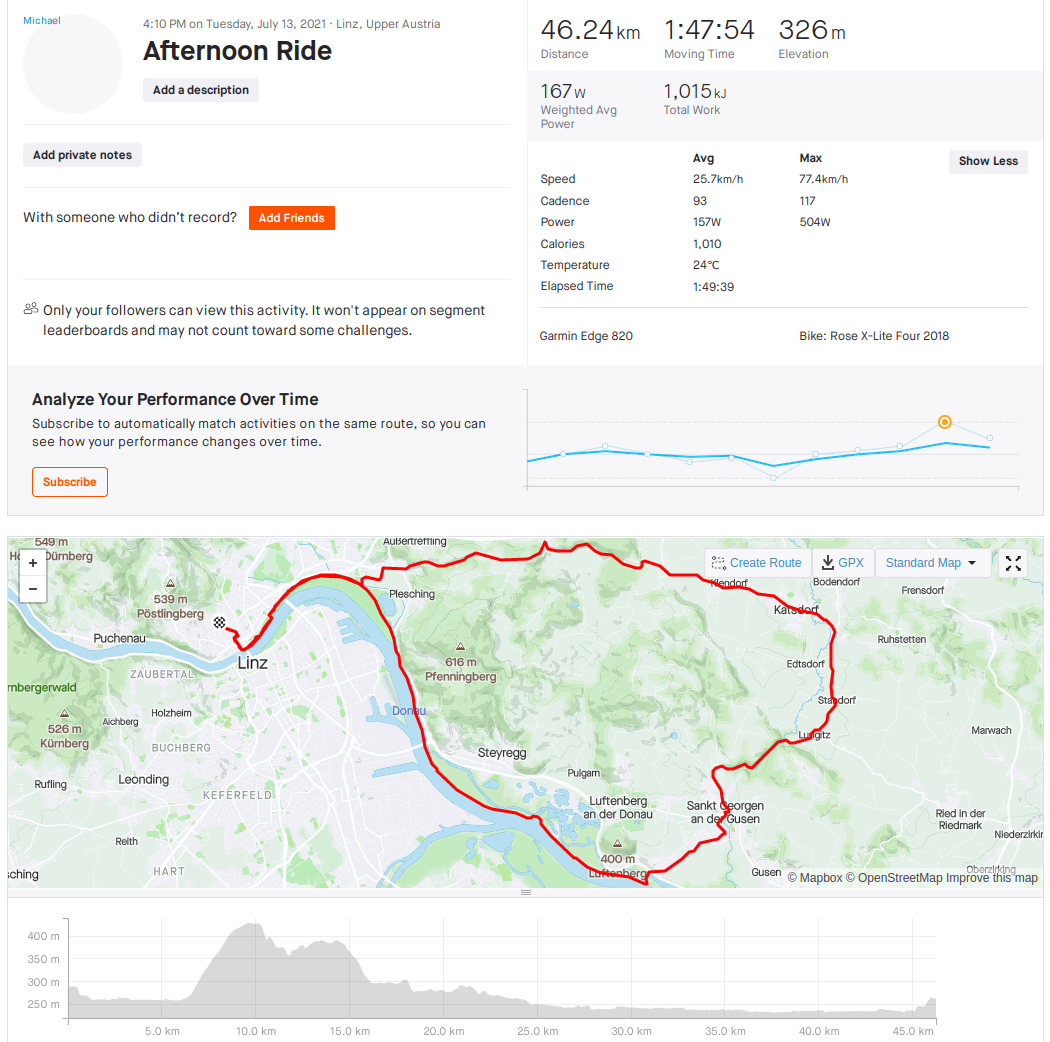 Using this calculator we can estimate how much power you needed to produce to maintain your average speed of 20.26 km/85 min: I get 38 W, although I might have some of the conditions wrong.

We can then multiply 38 W by your ride time of 85 minutes to get joules of work performed. I get 194 kJ.

Thanks to a neat mathematical coincidence, work performed is roughly equal to calories burned (some calculators treat calories as work + 10%). Based on that, I get about 215 calories burned. Obviously this is much lower than the estimate you got, and some of that difference might be accounted for by headwinds, knobby bike tires, uneven pacing, etc.

Another thing to take into consideration is that unless you are using a power meter on your bike, calorie estimates aren't very reliable. They're probably based on speed over time and heart rate (if that data is available).

In any case, 837 calories doesn't sound low for the time and distance you rode. If you are not bike-fit, then riding can feel like a lot of work.

It's likely that both the bike and hike calories are overestimates. Many devices use weight and speed to calculate calorie burn, but because they are not measuring any physical output (such as cycling power) can be wildly inaccurate.

In addition, many sites/devices also count a fraction of your BMR corresponding to the time of the activity in the resulting value causing an inflated number.

The 837 "calories" (which I assume mean kilocalories) sounds fishy. Usually when riding at 20.26 km/h speed I use 139 watts of power in varying terrain (10 meters of elevation ascent and descent per kilometer). That's only because I'm heavierweight than most. A normal weight person (70 kg) would use around 109 watts of power.

What you're missing is that a bicycle is an extremely energy efficient form of transportation. Low rolling resistance, ability to coast (well unless you're riding a fixie), ability to move without center of gravity moving upwards and downwards repeatedly, etc.

I weigh about the same as you and happen to have a power meter, so I can give an empirical - if anecdotal - answer.

I don't mean this in any way to be rude, but your ride was not fast. And mine isn't either. It may have been high effort for you, but if you've only recently started out, you might just be incapable of actual high effort - only effort that feels high. You may huff and puff and get all sweaty, but in reality you might not really be doing much work - just because your body isn't adapted to it.

Your hike is very unlikely to have burned 1200 kcal either. I'd guestimate 600-800, but it's much harder to measure than cycling.

Generally, if you take calorie data from an app on your phone, it's most likely a useless guess. If you use a heart rate monitor, it's gonna be a bit closer, but still way off. I did an experiment once - used a watch and a bike computer at the same time - watch measuring with a HR monitor, bike computer with power meter - and the watch overestimated my effort by about 35%.

If you want accurate data, get a power meter (it's expensive though). Otherwise, either don't pay too much attention to what calories your app tells you you burn, or try to find out an approximate correction rate (it may not be 35% in your case though, depending on devices used).

That sounds about right, maybe a bit high if anything. Here's a ride I did back when I was about 115kg, for something close to what you're saying and I got 750-ish calories from Strava. No power meter back then so numbers are pure guesses, but since I've switched to a power meter the guesses proved a little high.

So, sounds about right, but could be up to 30% high from my experience. 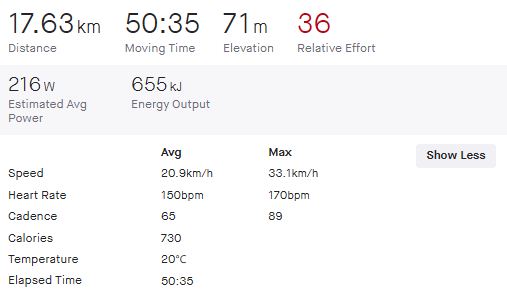 30
How many miles of riding require the same effort as one mile of running?