What is the smallest collection of bikes to maintain for these three types of snowed over paths?

Selecting the kind of bike to ride depends perhaps a bit too much on context—how much snow, whether and how quickly the snow is plowed, etc.

Last winter I've taken the road bike on trails soon after lighter snowfall. I rode on trails only and avoided proximity to cars since I didn't want to bet my well-being on whether nearby motorists were fully in control of their vehicles, plus the side of the road ends up being the plowed-snow-cum-slush zone. 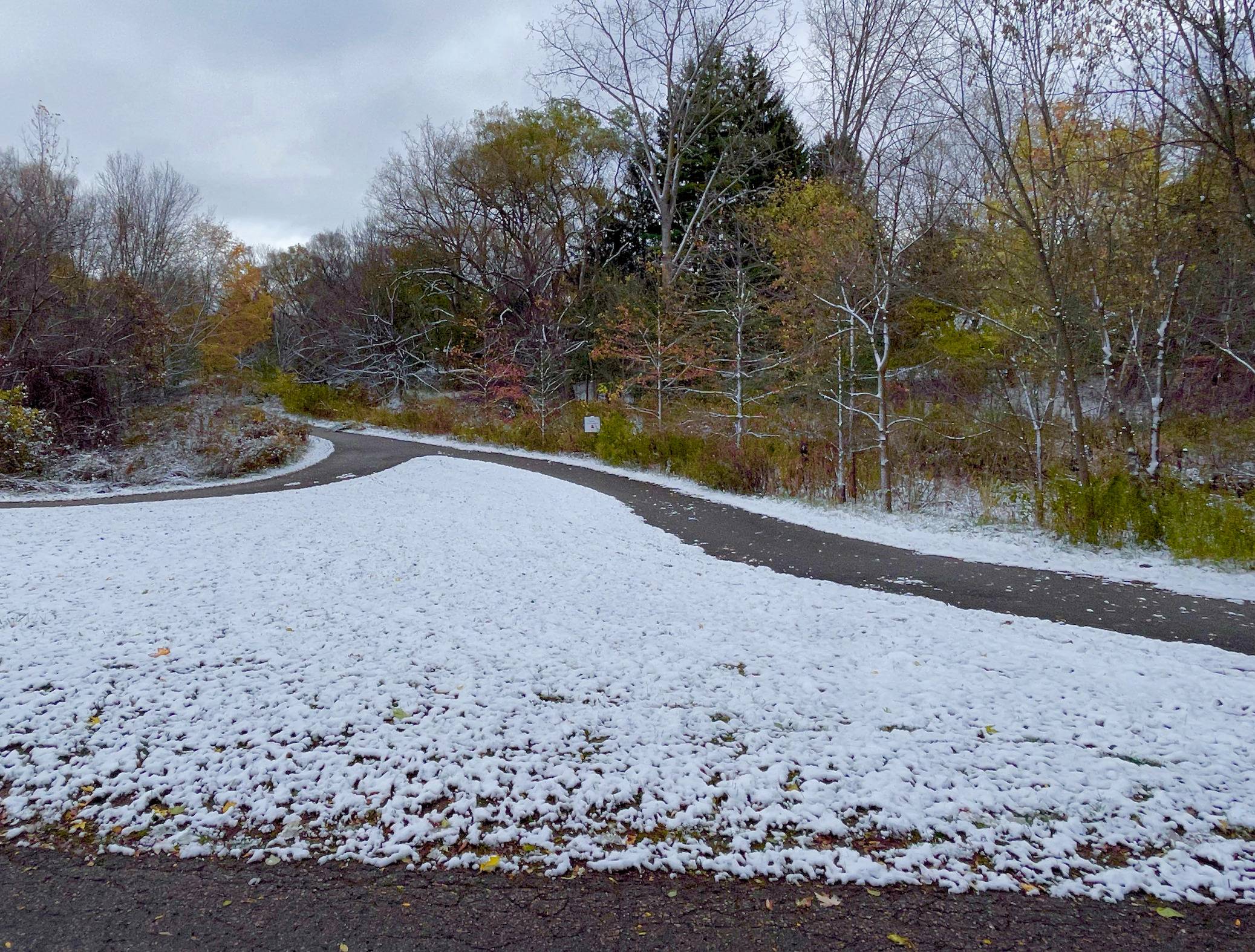 Once the snow falling was heavier, I didn't quite dare cycle at all, but that's partly because I hadn't found a way to keep my fingers from freezing. Now armed with winter cycling clothing and a couple of options for winter cycling gloves, I think this may be a bit easier. 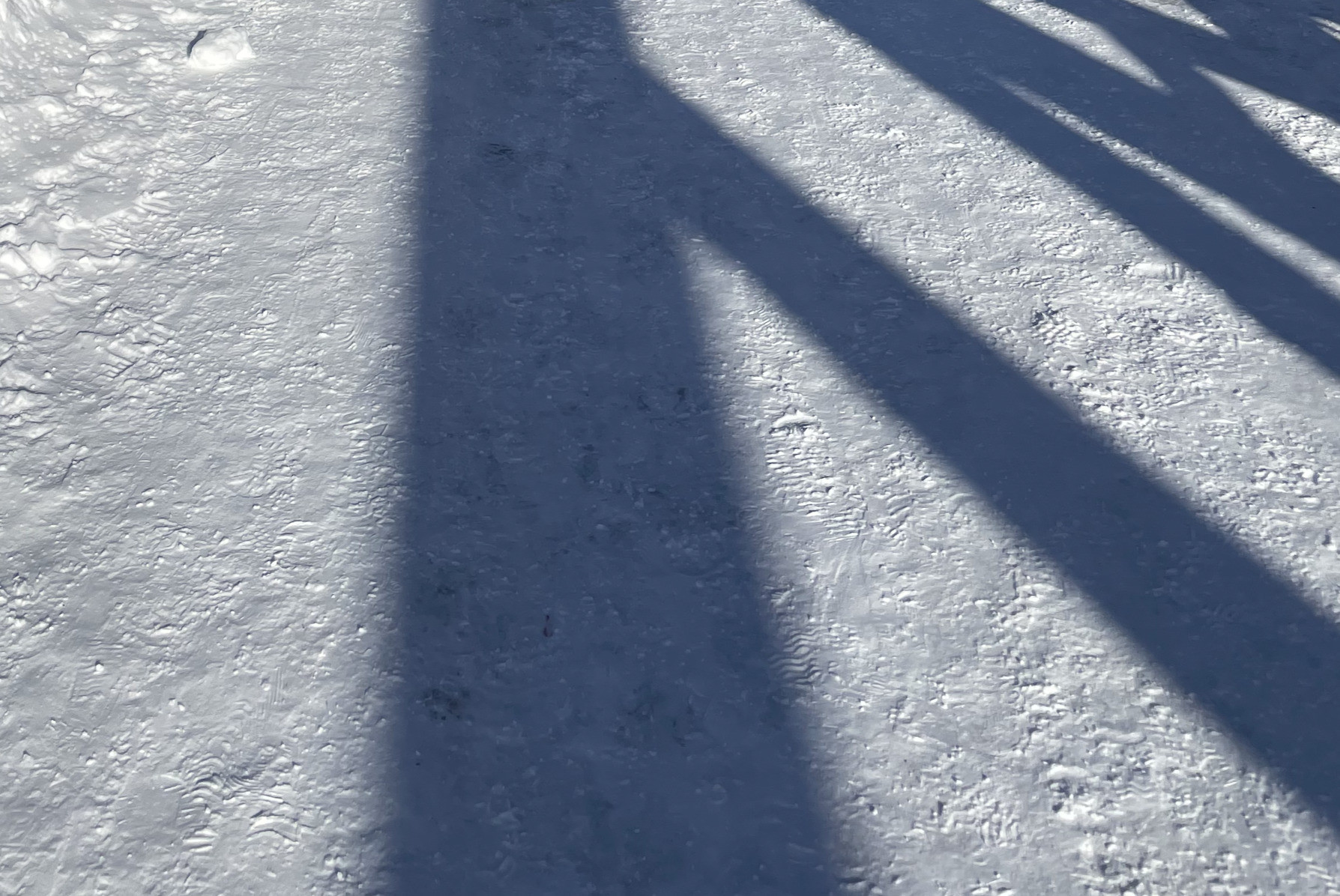 Oddly, the most tempting time to go cycling is right after heavy snowfall (typically called a "snowstorm", even though it's really nothing more than a lot of snow in one day).

Hikers do a pretty good job of tamping down the snow on pedestrian and cycling paths with their boots, and so a fat tire may not be absolutely essential. Perhaps studded 700-38mm tires might do on either a mountain bike or a cyclocross (?). 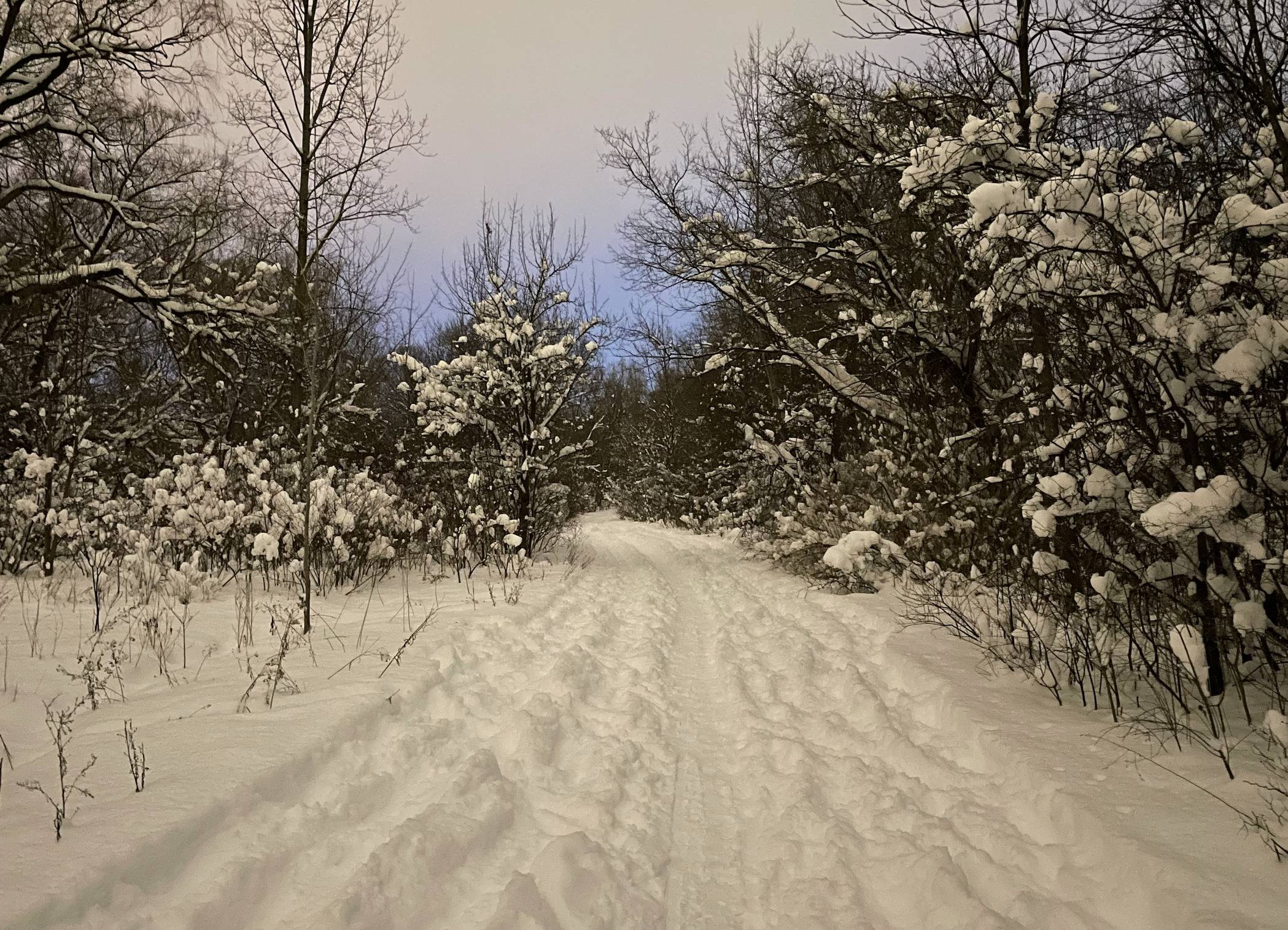 What is the smallest collection of bikes you would maintain to be able to ride on these three types of roads—as well as on clean summer paths?

The smallest collection suitable for all three is one bike with one set of wheels. You pick a bike for the worst conditions, and accept that it might be a little sub-optimal for the best conditions.

You would therefore pick a fat bike with studded tyres and accept it will be a little slow when used in the conditions in your first photo. If it's a commute it may take a few minutes longer, if it's a training ride then you measure your rides in time x intensity rather than distance anyway.

My approach is two bikes, three wheelsets, and this approach is the one I recommend to cover all three scenarios.

One of the bikes is a gravel / cyclocross / touring style drop bar bike that has adequate tire clearance for wide tires. It has summer wheels that I start to use when the sharp gravel preventing pedestrian injuries on slippery ice has been removed, and end using them when there is either snow or ice on the roads. During the winter period I switch a second set of wheels on. Those wheels have 35mm wide studded winter tires and Tannus armor that prevents punctures from the sharp gravel used to make ice less slippery for pedestrians.

Usually the limiting factor in spring is not when ice and snow cease to be an issue, but the period lasting over month where there is no ice or snow on the roads, but the sharp gravel used to prevent pedestrian injuries on slippery ice annoys unprotected cyclists with frequent punctures and the municipality is slow in collecting it away. During this period lasting over month, I use winter wheels. Of course someone could argue I could have three wheelsets for this bike: (1) studded tire winter wheels, (2) gravel period wheels with Tannus armor to prevent punctures, (3) summer period wheels with only fast road slick tires. However, I fail to see why I should increase the count of wheelsets from two to three merely due to only one short period lasting bit over month.

The first and second pictures are perfect for gravel / cyclocross / touring bikes if you use studded winter tires. However, the third picture in my opinion is the style of road that necessitates owning a fatbike with over 100mm wide studded tires. The third wheelset is the only necessary wheelset for this fatbike and has studded tires permanently mounted.

Fatbikes are generally very slow on well plowed or snow/ice free roads, so you don't want to use a fatbike unnecessarily -- yes, don't use the fatbike unnecessarily even during winter. Electric fatbike would of course eliminate the speed problem but leave you with a battery life problem. My experience is that 500-watt-hour battery that can give you 120 - 180 km during summer if used on a road bike during reasonable temperatures, gives only 30 km if using on a fatbike and riding on very thick snow at very low freezing temperatures using an assist level that allows over 20 km/h continuous speed.

Hikers do a pretty good job of tamping down the snow on pedestrians and cycling paths with their boots, and so a fat tire may not be absolutely essential

I disagree with this. I used to ride a bike with 40mm wide studded winter tires when I was a poor student (didn't have money for a fatbike). My experience was that you generally don't want to go on top of anything where the hikers have tamped down the snow. My opinion was that riding on freshly fallen snow is okayish with the 40mm tires, and riding on plowed roads was very nice with the 40mm tires, but where the approach fails is when pedestrians have been involved. Snow that has been only partially compacted by hikers but not completely compacted by a plow, is something where the bike goes all over the place. It starts to randomly go left and right even though your handlebar is straight, and staying balanced even with a flat handlebar is practically impossible. Also, the surface causes major vibrations that can loosen for example fender or kickstand bolts on your bike, and even if you use threadlock on them the vibrations are really annoying.

Note: not even fatbike is a do-it-all bike capable of riding on snow damaged by hikers. If hikers have partially compacted only a narrow trail and you want to stay balanced on it with a fatbike, it may be impossible. Here's an example video of where fatbike fails:

I suspect your third picture doesn't have the problem that is seen on this video. In this video, the snow has clearly been partially melted and refrozen, causing major difficulties for cyclists, whereas in your picture the snow looks very fresh and a fatbike is very capable tool for the situation in your third picture.

One bike and two sets of wheels, unless you're willing to both run tubes, and also change tires as needed, and also have the snow tires be a little borderline for the more extreme end of what you're talking about (the third picture) - in which case it's one bike with one set of wheels.

There are different ways of going about this, but to give an example: the main bike I rode for many years is a 1993 Trek 520 that has clearance for a 45 and some ice buildup. I've ridden it extensively with road tires in the 28-35 range, but it can handle 700x45 Nokian/Suomi Haakapeliita W240s with its fenders off, which are capable albeit around their limit on stuff like your third picture.

Given the modern array of bikes, there are a lot of ways you can do this with one bike where you switch wheel sizes down for your snow tires and thereby get more width and float. For example, riding 700x32 on your road wheels and 650Bx50 for your studded set is something a lot of contemporary allroad bikes could just do without issue. Something like a Salsa Fargo could run 700x50 everyday, 75mm fenders, have an alternate wheelset with 27.5x2.8 studded tires, and not even have to mess with the fenders.

This question depends heavily on individual resources: whether one is willing to buy, store, and, perhaps most importantly, maintain multiple bikes. (But to answer the question briefly, the best minimum is "one of each".)

In the long term the most important point is likely a recent observation made on bicycles.SE: the maintenance required is proportional to the number of kilometers ridden, not to the number of bikes.

The fact that there isn't one answer that would fit everyone doesn't mean that there aren't enough options to satisfy each cyclist, perhaps with the added benefit of finally appreciating what the (n+1) is about.

There are many options

Without a current road bike

If you don't already have a road bike, the following options would be workable.

That would not be a terrible solution, but it's hardly a great one:

Same as the previous solution, but buy a new set of rims + a duplicate cassette. Swap tires already mounted on rims in November and in March. (That's basically what motorists do, installing winter tires with a second set of rims.)

Get a gravel bike (or any bike with no suspension) that can accommodate 29"x2.25" on 700c tires. Such bikes are just barely starting to exist.

That may be just enough to go on deep snow.

With a current road bike

If you are already happy with your road bike, a gravel bike may not contribute enough to start cycling on snow and ice.

Get studded 2.25"-wide tires. Install them on a hardtail, preferably with 29" wheels. The front suspension is pointless, but a hardtail is the only frame that will fit (29")x2.25" tires.

Use the road bike, unless there is snow or ice. When either is on the ground, use the mountain bike with studded tires.

Ride road during the summer and for the first picture, mountain with studded tires for the second, and fatbike with regular fatbike tires for the third.

The justification here is that after heavy snow fall the fat tires will float just fine, and there will be less risk of hitting an ice patch (and so it may be possible to avoid also getting studded fatbike tires).

If the temperature has risen enough for snow to have melted, then fallen back quickly, there may be patches of ice on the road. If it then snows, the ice will be invisible, but will be just as slippery. If you're too concerned about this scenario, the following option is unavoidable.

8
Why are there no snow chains for bicycles?
5
Is there a All-In-One Bike that I can use for several types of riding?
16
Bike choice for snow commuting
18
When are studded tires necessary?
19
Fat or Skinny Tires for Winter Riding?
6
Does there exist a gravel bike that can accommodate 29″×2.25″ ribbed (and studded) tyres?
6
Can a fatbike cross frozen car tire ruts without slipping?
-1
Flexibility of exchanges between 700c and 29″, and between 650b and 27.5″

13
What type of bicycle would be the most suitable for riding in winter in the city?
19
Fat or Skinny Tires for Winter Riding?
5
What are the pros and cons of a Turbo Trainer over Training Rollers?
4
Tire selection for winter trike riding?