Is my helmet/camera/light setup dangerous?

Do you think the mounted camera and light on the helmet is safe? 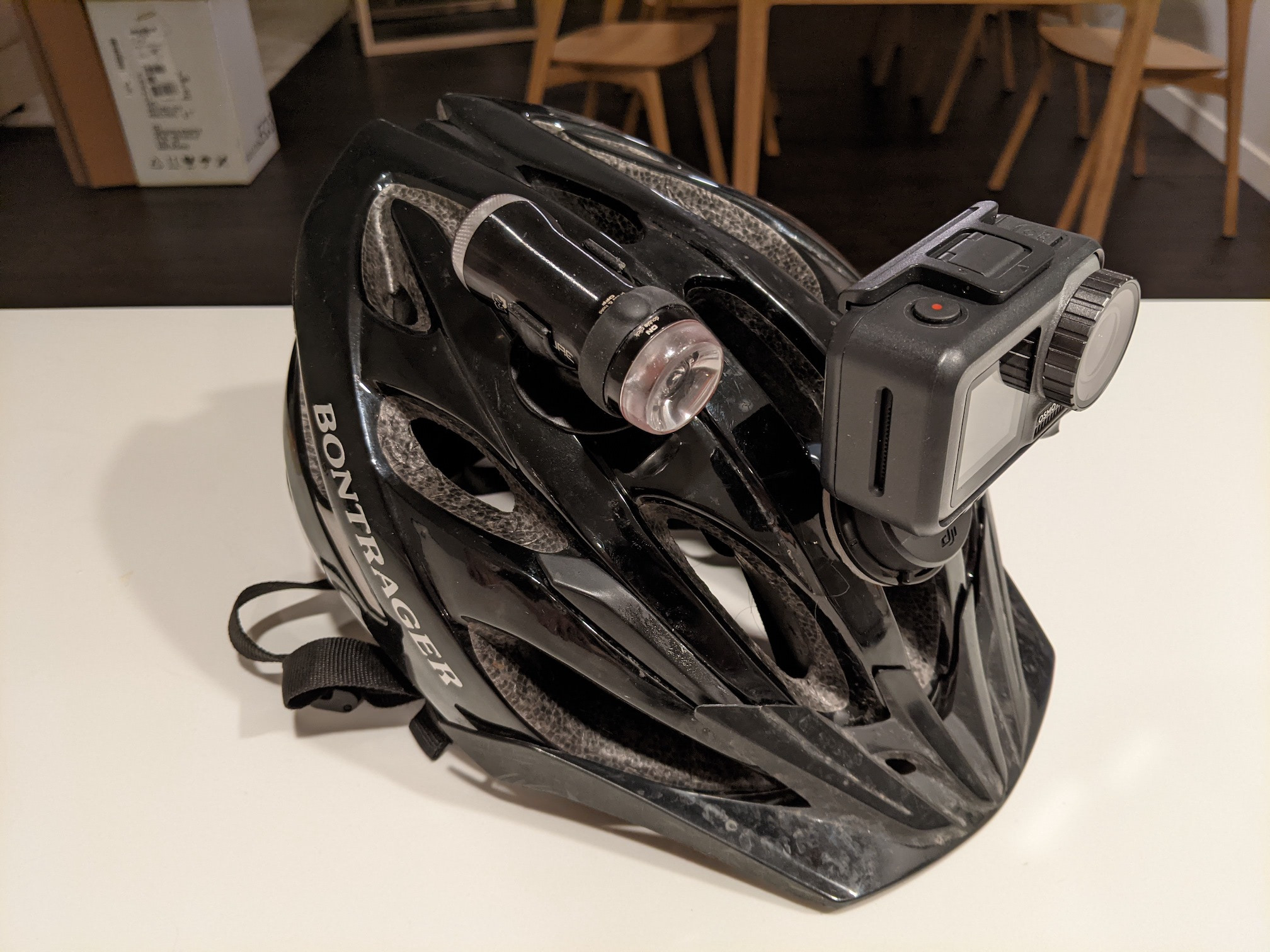 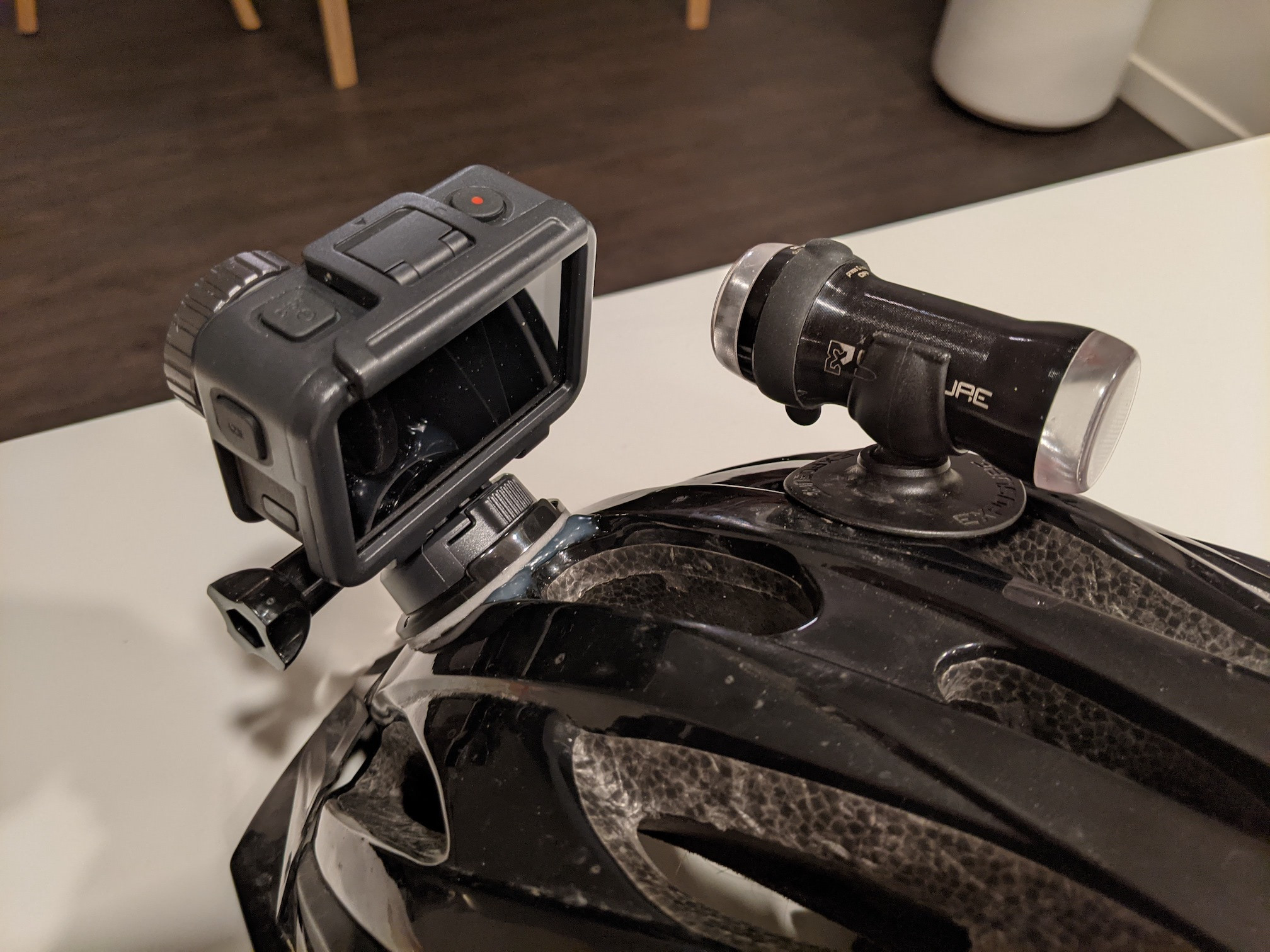 If we check the helmet's documentation, there's guaranteed to be some legalese text in there similar to:

modifications to the helmet will void warranty, and may decrease the effectiveness of the helmet. Do not modify your helmet.

Or words to that effect. A helmet has three main components

When you attach things to the helmet, they could interfere with that last function. Hypothetically your camera, light, or visor could "snag" on the road surface during an accident, and apply a torque to your neck.
Additionally, an impact directly onto those items could act like a nail punch focusing an impact on a spike and not spreading that impact over a wider area. This is reputed to be what exacerbated Michael Schumacher's skiing incident, when a gopro mount impacted a rock, effectively acting like a pickaxe.

Specific to your setup:

Imagine you've had a fall, or recall any significant falls you've had in the past. I find they fall into ~4 main sorts

I can imagine the camera/light catching passing branches, so occasionally they might cause a problem too.

Upshot - by putting things on the outside of a helmet, you risk impairing the sliding function.

Personally - I've tried a gopro in the same spot and it had the best view along with good targetting, but the weight was unpleasant and caused a surprising amount of neck fatigue. It was also nauseating to watch this footage.
A MTB ride seems to work well using a chest harness, or if you wear a backpack then there are mounts that go on the shoulder strap.
For road usage I use mine mostly on top of the stem (allows me to steer it when stopped) or on one bike it lives in front of the head tube. The low height is not ideal, but it is workable.

I've done a lot of testing with lights.

Now I use a manufacturer's accessory rear light that fits inside a rear vent it is not as bright which is disappointing. I also use a top light similar in shape to yours, but its mounted in a lower-profile fitting and centered further aft on the head.
I've weighed the benefit of a bright needle light under my direct control, vs the risk as discussed above, and chosen the light. You can assess the risks and benefits yourself and make your own decisions.

Safety is not an absolute. The transition from Safe to Unsafe does not happen immediately. The state of the helmet is probably considered not safe, compromised, but not unsafe. Much will depend on the fitting strength - are those attachments going to break away quickly with little additional force on your neck or will they hang on until well after your neck is broken?

I don't think there would be much dispute without fittings on the helmet, it is safer than with those fittings. But it could be argued that without the light, you cannot see where you are going, so the light makes you less likely to fall, making the helmet less safe, but riding safer.

Personally, I think essentials like lights to see where you are going (thinking MTB night riding in the forest, not urban commute in well lit street) are a compromise that improves overall safety. I believe non-essential attachments, such as cameras, compromise the safety of the helmet more than increase the safety of riding (but I am a MTBer, not a roadie - some roadies/commuters will disagree on this).

No, this is not safe.

The light can go on the handlebar, and the camera onto your chest - those locations have been proven to work very well and are perfectly safe and practical.

Not the answer you're looking for? Browse other questions tagged safety helmets lighting headlights camera or ask your own question.

11
Recommendations for inconspicuous helmet-mounted video camera
2
How to fit a Storage Options bike cam helmet mount
53
Does a helmet-mounted light affect the safe functionality of the helmet?
6
Helmets with dedicated mounting system for lights, cameras etc.?
6
Will mounting a camera on the handlebar instead of the helmet make the picture more shaky?
9
Camera alternatives for commuting (2014 version)
5
Are MIPS helmets compatible with helmet mount lights or cameras?
1
How do breakaway helmet accessory mounts work?
32
Can Cycle Camera Evidence be Used by Police to Enforce Dangerous Motorists?