My bicycle's rear shock is clicking and making a squishing noise. Do I need a new shock or does it just need to be tuned?

I bought a used bike and on the first day, it made a small clicking noise whenever it came back up fully. It also made some squishing noises whenever I compressed it and whenever it started decompressing. I rode it for a while that day and it ceased, but today when I hopped on, the noise was back, and this time it was actually distinguishable. I've checked all the screws and stuff to see if they was loose but none of them were. Do I need a new shock? Or can I just take it to a shop and get it repaired/tuned? The bike is a Kona Stinky Deluxe and the shock is a Marzocchi Roco. If I do need a new shock, do any of you guys know a really cheap $70 shock that's good? 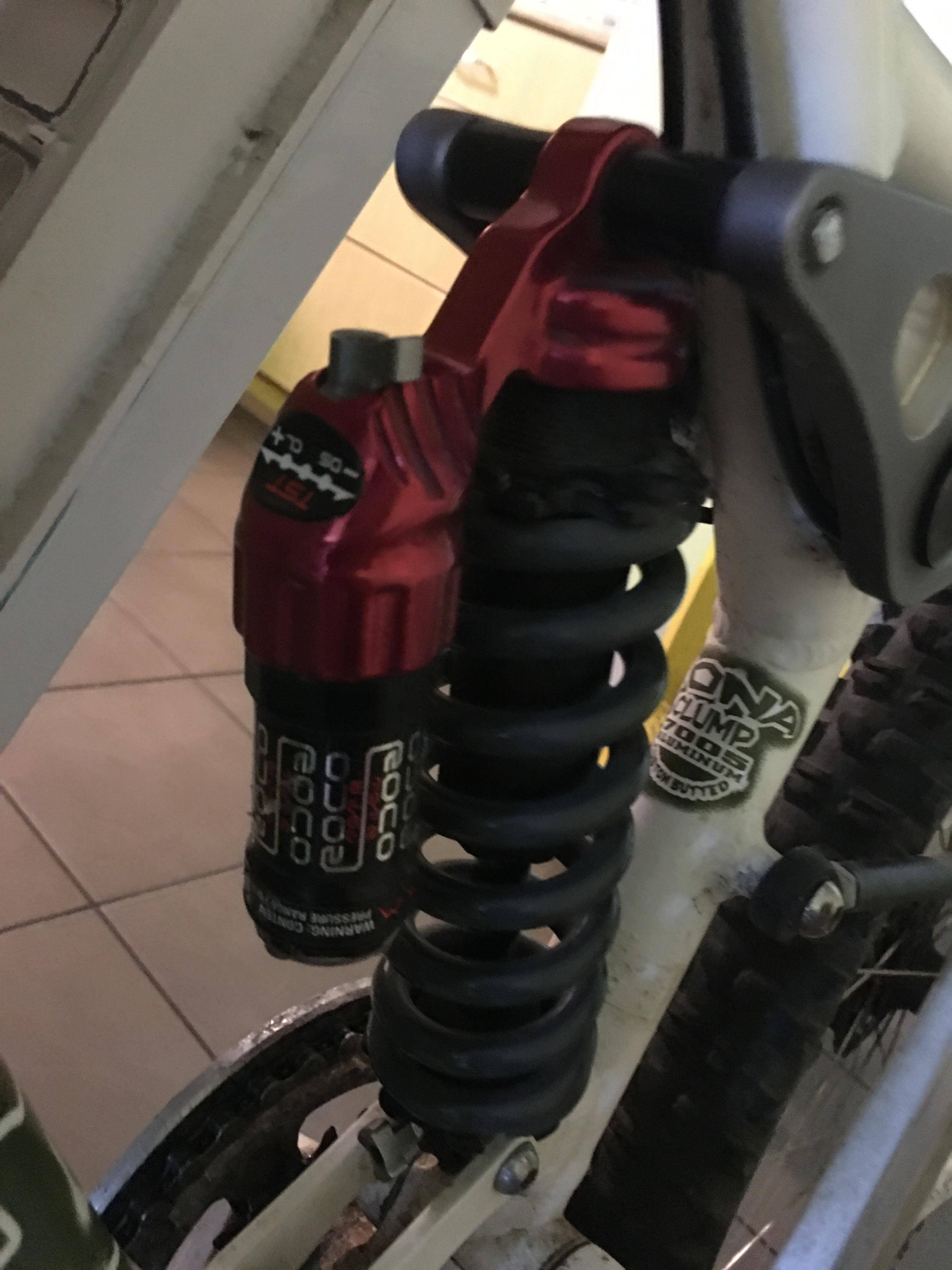 I used to have an old MZ Roco on my freeride bike. A couple of years without a proper maintenance and it started making strange squishy sounds, similar to what you describe. It was still working, however the rebound changed.

I am not sure how much a proper service costs in your country, in my country in the Central Europe it's around 80 euros. However for this price you can hardly buy a decent shock, even in the used market. And moreover, used forks/shocks are often not maintained properly and need a service anyway.

I suggest you find a bike service shop with a good reputation in your area and consult an experienced mechanic.

The shock probably just needs a service. I am unfamiliar with these shocks, as I understand it, the shock is a fairly complex service, best done by a specialist (not all LBS will eb able to do this), however I found this thread that indicates it is doable by a user.

More importantly for you is some posts later one

92SE-R said: Great guide man. Quick question on the Roco. I bought a WC used and it has a nasty knocking sound. I can feel it in the handlebars. It isn't DU bushings or the linkage bearings. I can swap out to my spare Vivid, and the knocking goes away. Other than that, the shock works fine. Any idea what it could be? Cheers for the props mate :thumbsup: I can think of a couple of things that may be causing it

1- You may not have enough pressure in the boost valve, make sure its pumped up between 175-210 psi, others they will knock, this is one of the characteristics of the Roco's

2- The o-ring that holds the HSCV in place has worn out, and is causing the HSCV to knock when oil is forced through it, try replacing the o-ring

3- Your IFP is set a a to shallow/ deep depth and is knocking while the shock is cycling, try re adjusting the depth between 35mm-40mm and see how that goes

Hope that helps! Let us know

If you do not know the service history of the shock I recommend a service. Failing to service shocks if probably the leading cause failure (My opinion, nothing to back it up).

As far as a replacement - entirely possible, you need the same length and stroke, and should have the same dampening option (or you won't get a good ride). For $70 you will only get the cheapest, most basic shock, probably with few or no damping options. Probably better performance from a broken Rocco than a $70 shock.

Not the answer you're looking for? Browse other questions tagged repair shocks or ask your own question.

4
LBS said creaking under torque is normal?
4
Does ProPedal on FOX RP2 rear shock wear out when on during downhill?
3
Fox Float RP2 rear shock problem - soft run and hiss sound on first 5-10% of travel
8
Reoccurring Bent Axles, any reasons or upgrades?
4
Did I just ruined my rear shock? fox float :(
2
Should a new rear shock be building oil in the shaft?
1
Disc brake keeps making ping-like shudder
4
Replacing Ultegra R8000 'long cage' derailleur (crash repair advice)
2
Can't figure out the origin of loud screeching noise
3
Wondering why my rear triangle crashes around everytime I use the rear triangle