Let's say I have a 9170 Di2 11 speed group and want to update to 9200 12 speed keeping what I can. That means a new RD, battery and wires are a must. Shimano claims the old 11 speed Di2 time trial shifters will be compatible, with an adapter, but what about ST-R9170 and other 11 speed Di2 shifters, are these compatible too? Did anyone try yet?

Shimano have given me a media bike to use for a month, so I thought I'd connect some of my old levers, to prove what I wrote below.

I first disconnected the front derailleur, then connected an EW-AD305 to that, and used that to connect an SM-JC41 (using EW-SD50).
Then I connected my SM-PCE02 to the SM-JC41 and made sure E-Tube Project V5 gave the OK :).

At this point the bike still shifted, of course - you don't need a front derailleur to build a working Di2 bike. 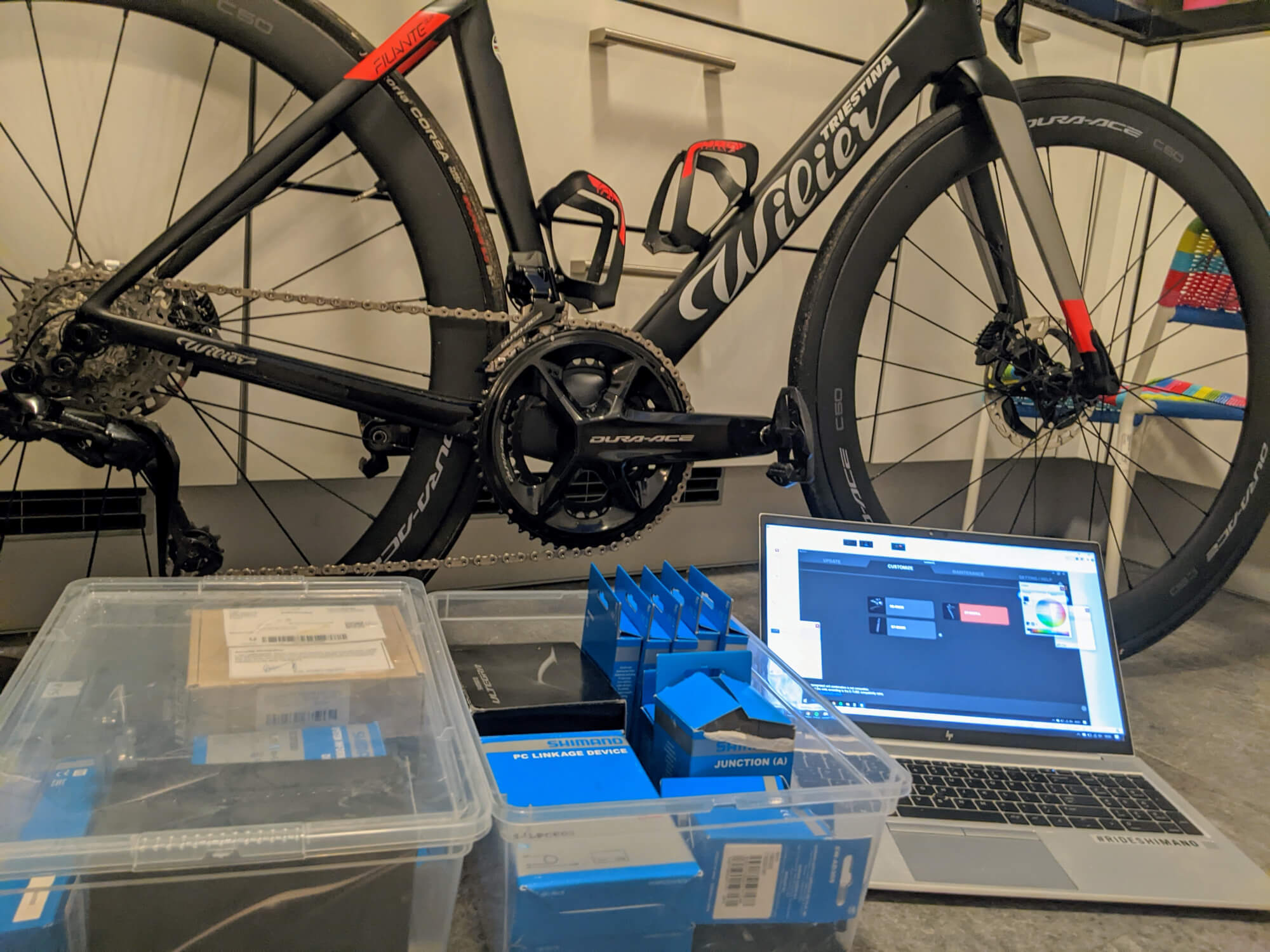 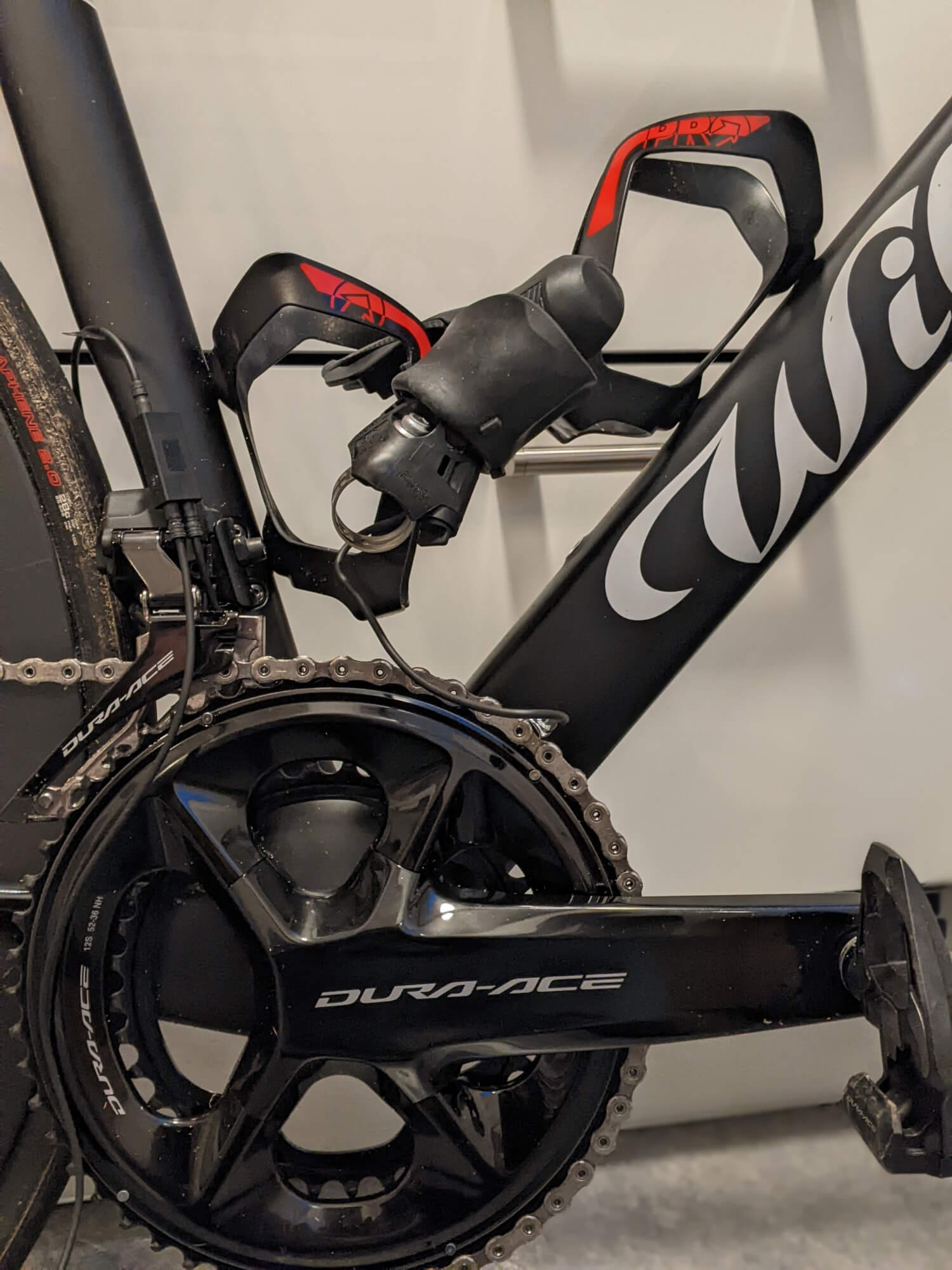 Now.. when I pressed any button on any shift lever, the bike wouldn't work. No movement or LEDs at all. It was pretty much dead, even when using the 12-speed lever.

When I ran E-Tube Project V5 again, it connected to the bike, but immediately disconnected. It complained that the bike setup was incompatible, as described in my original answer below. 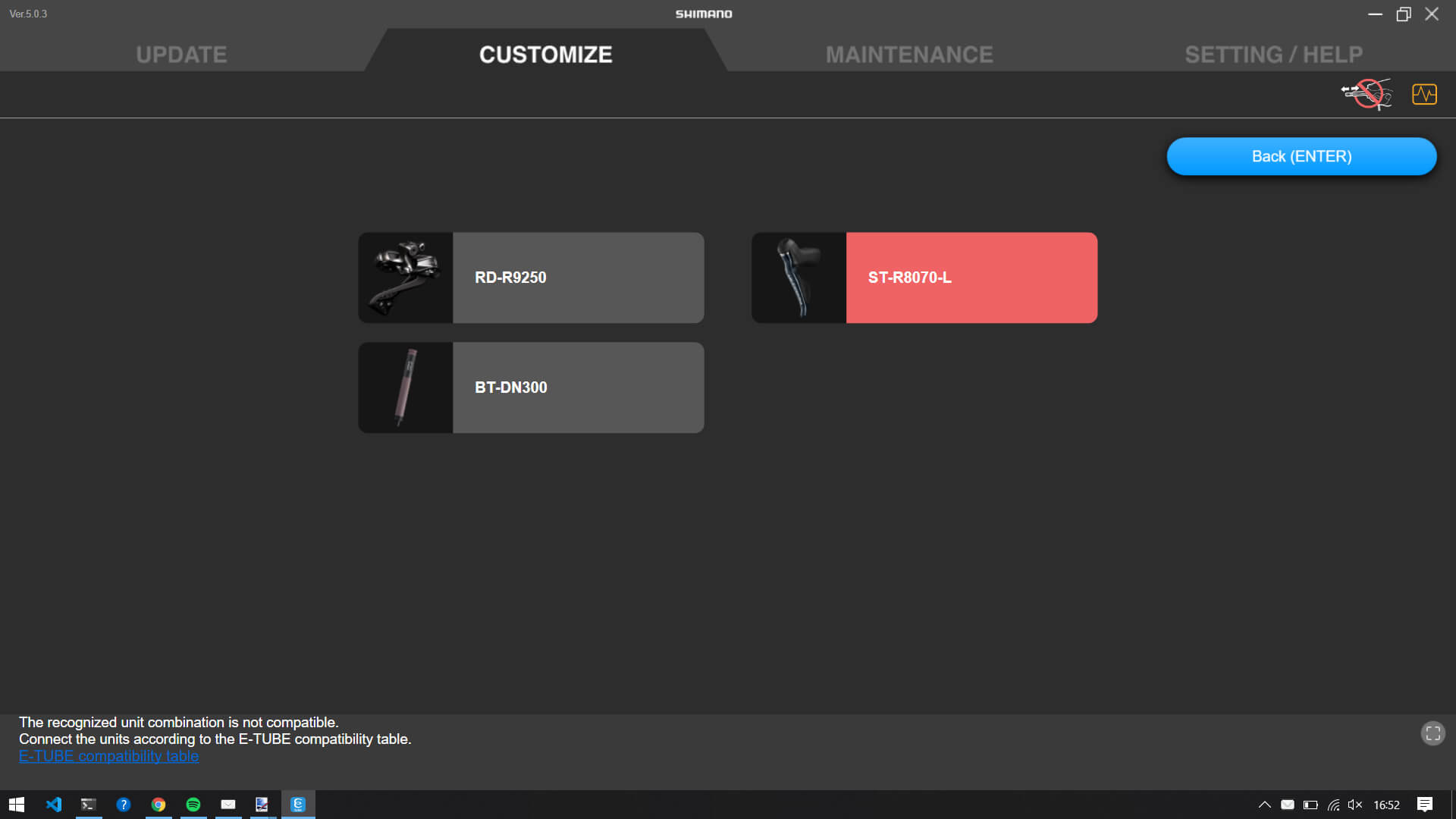 So.. no - you really cannot mix these. Of course, trying this was pretty much an exercise in futility, but since you wanted proof, here it is :).

The answer is no, you cannot use any of your older shifters, unless they're one of these time trial shifters:

or the satellite shifter:

So why is there no firmware update for the other older components? As far as I know Shimano want to say goodbye to the EW-SD50-wired components. They don't want to have to support ST-6770 for the rest of the Di2 lifetime. And while that sucks for those of us wanting to 'easily' and cheaply upgrade to the 12 speed system, I get it. The EW-SD50 wires are bulky and I very much prefer the EW-SD300 wires. Also, I would hate to still see EW-SD50 components on 'new' bike builds years from now.

One could argue that they could drop support for 10-speed components and just roll out firmware updates to 11-speed shifters, but you have to draw the line somewhere and they did.

As for why they have published firmware for the units I mentioned above:

The TT-Di2 market is relatively small. At the moment it's not feasible to make new EW-SD300 versions of those shifters for just a handful of riders, so Shimano updated the firmware on those components instead (and let them work with the 12-speed stuff).

To summarize:
The new / old wiring is exactly the same. There is no problem there. The older components have not gotten the firmware update "Adapted for new DURA-ACE R9200 Series and ULTEGRA R8100 Series." and will therefore not work with the newer series.. except for the ones I listed at the top of this answer.

From what I can see, the answer is no, at least directly. Shimano has made a new standard for the E-tube wire which is thinner and sleeker, but also has a new, smaller connecter. The new cable physically won’t connect to the old shifters.

Whether or not adaptors will be available from Shimano or others is something I can’t answer at the moment.

Nobody has tried yet, but it's likely that some people will, one of them being Terry at Bettershifting.com.

As background for other readers, the Di2 system battery contains the central processor. Shimano just announced 12s Dura Ace and Ultegra groups today. Time trial and triathlon bikes are a very small share of the performance bicycle market. Shimano appear to not have developed new 12s components. They instead developed an adapter box (component AD-305), which you can plug your 11s TT components into, and which is then wired to the new Di2 battery. This is discussed in this Cyclingtips article.

I don't have an intimate knowledge of Di2, but my understanding is that Shimano would need to issue firmware to enable the older TT shifters to talk to the adapter box. This comment on the article speculated that they might not do so for older road shifters. Indeed, a Shimano representatives discussed on various later podcasts that they would not do so. I think I recall that at one point, older 10s Di2 shifters would work with an otherwise 11s Di2 system, but Shimano disabled that functionality in a firmware update. Basically, it could be done, but Shimano judged the effort to reprogram the firmware not to be worth the effort. A harsher way to view this is as an anti-consumer decision.

Not the answer you're looking for? Browse other questions tagged shimano compatibility shimano-di2 or ask your own question.