The usual trope justifying the use of Presta valves over Schrader valves is no longer logical (in my opinion at least) because of changes in wheel, rim, and tire systems. Let me exemplify by refuting some points made in the 2012 question regarding the valve debate:

Daniel R Hicks: "The main thing is that the Presta valve is thinner, and takes less of a bite out of the rim. This is quite important as the rims get narrower."

Rims nowadays have become so wide, even for road bikes, that this fails to be a major issue. Perhaps back when rim widths were like 15mm or whatever it was indeed a problem, but with most new road bikes coming with 19+mm rims and MTBs 25+mm, the difference in valve hole size is much less significant. What's the difference between say, a 19mm rim with a Presta hole versus a 21mm rim with a Schrader hole?

Daniel R Hicks: "Further, the Presta works better with hand pumps in that there's no spring that the pump needs to overcome to get air into the tire. Also, the Presta always has the fully-threaded body (which is possible with Schrader, but rare), so a nut can be used to hold the valve in place -- again, quite important with hand pumps."

Hand pumps can be designed to press the valve core, and fully-threaded Schrader is easily manufacturable.

geoffc: "Presta makes more sense on higher pressure tires, since it allows you to pump in higher levels with a floor pump"

The trend of wider tires means that average tire pressure has lowered, so few cyclists still need to be able to pump 100+psi or whatever. This is a total non-issue for mountain bikers anyways.

cyclo: "Another advantage of Presta valves is they can be made longer, a lot longer in fact than Shrader valves."

A non-issue if greater manufacturing capacity is switched to Schrader.

You get my point.

So why are modern bicycles still being sold with Presta valves?

I think you are correct; there is no technical advantage of Presta. But many things are not used for technical reasons but rather for momentum reasons.

Personally I prefer schrader for all my bikes, including my tubeless tires. Any rims drilled for Presta, I simply drill out. I only have presta valves on a couple very narrow rims which I would rather not drill out.

Note that shock valves use schrader valves and those are often pumped up in excess of 150PSI, with very small chamber volumes. So even the high-pressure argument for Presta doesn't really hold water.

There's still a compatibility argument for Presta...a Presta with an adapter can be used by any pump, whereas a schrader valve cannot be adapted to work with Presta-only pumps. And likewise, Presta valves can usually be used in Schrader-drilled rims, but not the opposite without drilling. So Presta remains, overall, highly compatible if you can keep a simple adapter.

Presta (btw: we call it Sclaverand or simply road bike valve here in Austria) has one advantage: You can easily release air.

There could also be some small weight savings and aerodynamic benefits. I also think dirt is less of a problem with Presta (assuming you use both without a valve cap).

Even if rims have gotten wide enough to drill holes for both valves: Isn’t it better to keep the hole small?

The greatest advantage of Schrader valves is that you can inflate your tyres at any petrol station or car workshop.

While inertia seems to be the main reason, its not that simple, the bike industry has shown more than ample capability to introduce improvements that are not compatible with older standards.

Designers pushed 1x to free up space around the highly crowded bottom bracket on soft tail. 29" rims on MTB proved too weak with standard width hubs, so a wider standard was introduced. Through axles, disc brakes, threadless head sets, tapered steerers. Logistically introducing a new standard is not something the industry is scared or or inexperienced at.

The full length thread thing would be easy to solve and could come later. Schrader comes in 60mm, so already fits many deep rims, so there is no reason any bike cannot leave the factory with Schrader (many do), yet the manufacturers are not changing ( I suspect its more "Changing very slowly" ).

This leaves the customer. Who makes the decision - the end user in some cases will refuse to buy and ride a bike with Schrader. For decades its been the valve of choice for BSO's, and one mark of a quality bike was Presta valves. Some bike shops themselves perpetuate the myth the Schrader are not as good, and a sure sign of a cheap bike, while others want to avoid having 'that' conversation with the customer (Who is always right) so they prefer to stock bikes with Presta.

The valve weight is a testable suggestion - a quick dig in the bike shed shows I have enough for an initial comparison. These are normal valves, nothing here is especially lightened for racing. They've all been cut off otherwise-dead tubes. 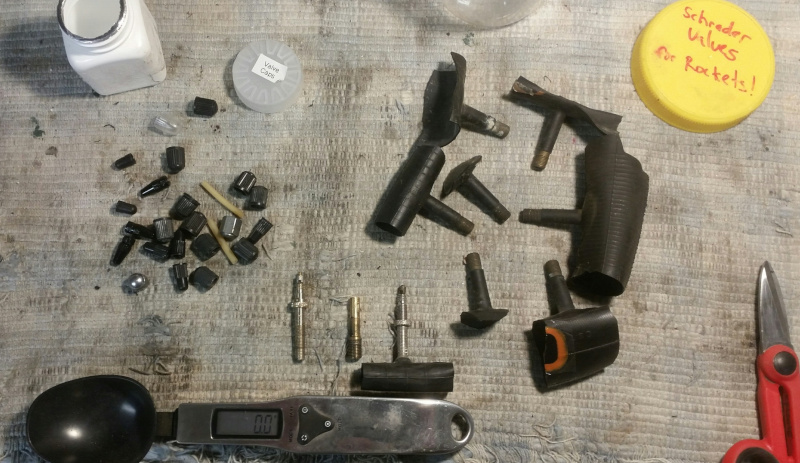 Weights are in grams

Upshot - the difference is minimal, under 2 grams.

...unless you have a metal or decorative valve stem cap, or a very long presta valve stem for a deep-section rim, 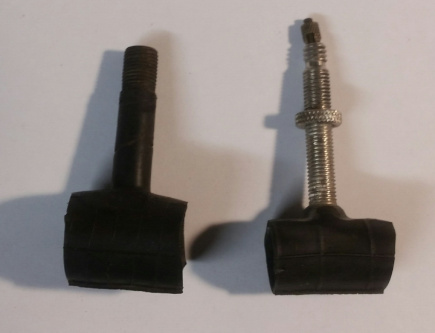 with 22mm of rubber tube attached 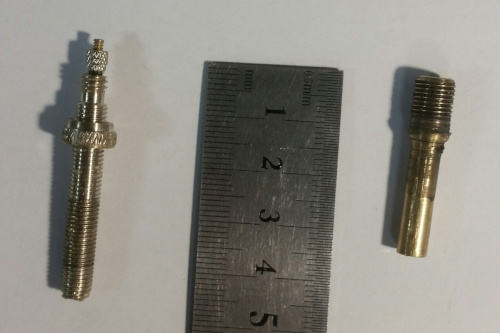 Bare valve stems. I use these as mandrels in my lathe when I need to turn a valve cap.

Presta valves are dominant in what bike segment(s)?

From my N=1 experience, most city/recreational bikes are fitted with Schrader for compatibility with gas station pumps. They also run wider rims and do not attempt to save grams.

On road bikes, the dominant valve type is Presta. Probably because of weight, and a smaller diameter.

On kids bikes there is a third type of valve. https://www.baby-express.net/Puky-VP-05-valve-for-childs-bicycle-scooter-Unicycle.html

Can there be one type of valve that is better for all types of bikes? Sure!

Does it make sense to try and persuade all different stakeholders in the industry to accept it? Not really!

For consumers, there are options available, most pumps already work with all types of valves, and in the worst case, you have to carry a small adapter for Presta -> Schrader to be able to use gas station pumps

-3
Why are presta valves better than schrader valves
39
Why are both Schrader and Presta valves still used on tubes?

48
Can I use a Presta tube in a Schrader rim?
4
What type of valve do shock pumps use?
3
Tubeless conversion on schrader valve rims
4
Am I unscrewing my pump incorrectly?
1
How to attach mini-pump to valve on kids' bike with no space to manoeuver?
10
What air attachment screws onto a Presta valve with the core removed? High volume for seating bead?
2
What is this valve and how do I fill it?
2
Presta to Schrader Conversion
5
How to keep Presta valve core from detaching after inflation?