What is the best technique to use when turning my bicycle?

Turning at low to moderate speed while road riding is unlikely to be a task of great difficulty for most riders[citation needed]. One simply rotates the handlebars, and off you go.

It is when speeds get higher or turns become sharper that technique becomes more nuanced.

The question gets even more complicated in the context of off-road riding, where off-camber turns and berms (banked corners) are to be found. Recommendations will be more situation-dependent there.

You lean both. The body is leaned the same amount as the bike. Doing it otherwise would place side loads on the hub bearings and spokes. While angular contact cup and cone bearings can take side loads and 36-spoke 135mm/142mm OLD wheels can take reasonable side loads too, there are hubs using cartridge bearings that are really poor in taking side loads, and low-spoke-count 130mm OLD 11-speed road wheels can have so large dish and so low count of spokes that the wheel could collapse with excessive side loads.

Countersteering is the only possible way of cornering a bike. If you have cornered a bike, you have already countersteered. There's no other way possible to corner a bike. You do it subsconsiously.

Visualize the line in advance. You'll learn it if you practice it. You want to visualize the line in a path that doesn't have excessive bumps on the road, and the line should be such that at no point is the traction exceeded. Braking slightly on the corner with both brakes (equal front+rear) is possible because if your cornering g-force is 0.98g and your braking g-force is 0.1g, then the total force is sqrt((0.1g)^2+(0.98g)^2) = sqrt(0.97040g^2) = 0.985g according to the Pythagorean theorem. So moderate amount of braking increases the total traction need only very slightly.

It's an interesting question. I don't think either foot should be down, but the foot forwards for the direction of turn.

Standing with knees bent, heels down, weight over back of saddle.

Lean is learned intuitively as is countersteer. Once you have confidence to take a corner fast, you can analyse that in fact you do automatically countersteer and that you and the bike lean into the corner in relation to speed.

Where you have a choice of line, you start wide, come as close to the apex as possible and finish wide, like a racing car. But on a narrow trail, you don't often have a choice. On a berm, the fast line is out near the top and the slow line on the inside at the bottom and that stays a constant, you don't cut the corner.

Off camber turns are even harder as extreme lean angles will easily lead to wash-out especially on loose surfaces so just go slow on these until you've learned the particular bend.

I watched a video on this a while ago and it showed some useful tips step by step. This and a few other videos on their channel might help you out. In this video they cover flat turns but other videos cover berms etc

There are loads of tips here from the very basics to more advanced stuff but the thumbnail is a pretty good example. Outside pedal down to minimize risk that inside pedal catches the floor, and bike / body separation so you can lean the bike while retaining balance. 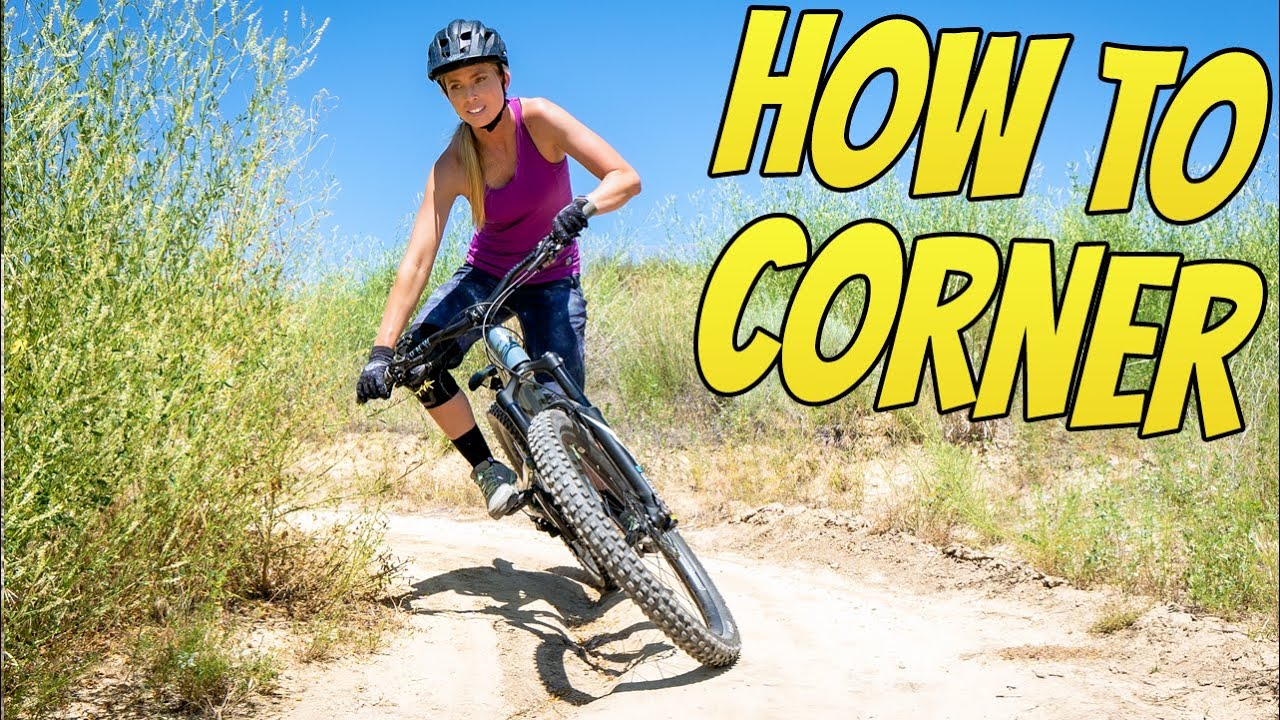 Usually your outside foot should be down, especially if you’re taking the turn at high speed (you need to lean more at higher speeds), with the intent being to avoid clipping the pedal. This is notably the exact opposite of what a lot of people seem to intuitively do, but is something that you will definately learn very quickly after the first time you clip a pedal.

If the ground is especially uneven though, having both feet at the same height is generally better for controlling your weight distribution. If cornering like this, usually you want the inside pedal to be the one to the front, as that will let you capture some of the extra energy of rebalancing after the turn to help maintain speed.

For a lower speed on even ground, normal weight placement for the bike type is fine and generally preferable.

For higher speeds or uneven ground, weight should be on your legs and arms but not the saddle, ideally with both your legs and arms slightly bent and loose so you can use them like shock absorbers. If the ground is level, you generally also want your weight back like you would position yourself while braking. The key here is to make sure you can shift your weight quickly to compensate for issues resulting from uneven ground, loss of traction, or other unforeseen complications.

Both, but unless you are doing things strangely this will happen naturally (and you should let it). From an efficiency perspective, just leaning yourself is inefficient (you have to lean further to shift enough weight to turn properly), but from a safety perspective not leaning the bike is potentially dangerous because it puts a side load on the hub bearings and the wheels (good bikes should be fine, but it’s not something you should bet on, and the types of failure this can cause are both expensive to fix and really dangerous to have happen).

In general, you should countersteer as part of turning. It’s technically possible to turn without it (leaning appropriately to produce the same effect, sometimes called ‘counter-leaning’), but you need to know what you’re doing and it’s riskier than countersteering.

In practice though, if you have to think about countersteering, you’re probably approaching the process of turning incorrectly. The required motion is intuitive even to small children, and it’s instinctual enough to anyone who has ridden a bike any reasonable amount that they will generally not even notice that they’re doing it.

On level ground, a racing line is theoretically optimal but not the easiest. Outside of actual racing, you ideally want to just come from the outside, cut as close to the inside of the turn as possible, and end on the outside (this maximizes the turning radius, making it easier to safely turn at speed).

On inward banked turns (that is, the inner radius is lower than the outer), a similar out-in-out pattern is still safest, but it’s also relatively easy to take a constant distance from one edge if the bank angle is correct.

If you have to deal with an outward banked turn (that is, the outer radius is lower than the inner), a fixed distance from one edge is arguably safest.

Of course, that all assumes no potholes, bumps, or other hazards. Ideal line choice obviously avoids those.and is such that you maintain proper traction throughout the turn (though that is something you kind of have to learn based on the combination of tires and ground conditions). From a practical perspective, it’s very helpful to visualize the path you intend to take ahead of time.

Now note that turning is not steering but is a leveraging of the tires against the track surface. Then since both front and rear tires have drift, there is not much apparent steering angle. (Tire drift is the fundamental action of lateral tire traction and that fundamental makes the line of the vehicle in a curve. It's a tire slide that's a loss of traction. The vehicle-dynamics source for this fundamental is tire-slip-angle which according to me should really be called tire-drift-angle.)

Also, lean the body, don't stiff-arm the bicycle down and the rider up. Get the rider weight low and to the inside on the turn-in. But stay in the seat, don't move the rider's weight forward.

Not the answer you're looking for? Browse other questions tagged riding-position skills or ask your own question.

9
How do you shift your weight when leaning on a turn?

12
What do you do when a bus stops in front of you?
5
Why do I do the "saddle shuffle" when riding?
14
What is the trick to riding on sand?
6
Getting the right cockpit position. Sliding forward. What should I adjust to keep my sit bones on the seat?
3
What is the best aero position in a mountain bike?
14
Is it poor technique or physiology that causes people to cycle with their knees sticking out to the side?
7
Which position adjustments maximize the use of the glutes in a road bike?
1
What are some key road flat pedal bicycle adjustments that affect neck strain?
2
How and when should one use the "On the drops" position on drop handlebars?