I have relatively small hands (fitting men's S gloves). Though mostly fine with the 105 r7020 shift levers after minimizing the reach, I never feel really comfortable or confident. I'm wondering if I should swap them for a pair for smaller hands. Please let me know what you'd recommend if you happen to own or have tried them:

Regarding the comments about braking on the hoods, I believe I usually brake with 3-4 fingers on both the road and gravel with Ultegra Di2 hydraulic levers. I don't think that 2 fingers is enough for a hard stop, even on hydraulic disc brakes. However, I suspect I am a similar size to the original poster. In the drops on dirt, I do wish my brake levers were closer, even though I've minimized the reach using the adjustment.

To my knowledge, the performance groupsets are developed with feedback from testers in pro cycling teams, and then they're trickled down to the second tier and third tier groups (i.e. Dura Ace gets developed first, then the technology is trickled down to Ultegra and 105). Those pro teams are dominated by men, who are larger on average than women. Moreover, even though pro men's road cyclists do span a range of sizes, we don't know if Shimano's pro testers have enough smaller riders to surface issues like ergonomics.

There are several aspects to lever size that might make them harder to use if your hands are smaller than average. First, the reach from the lever to the bar might be too long, even after you used the reach adjust feature. It may be worth revising the brake lever's position on the handlebar. The Cyclingtips article notes that some shallow drop ergonomic handlebars have drops that have a very sharp curve. One example is below. These bars will tend to put the brake levers further away from your hands than other bars when in the drops. 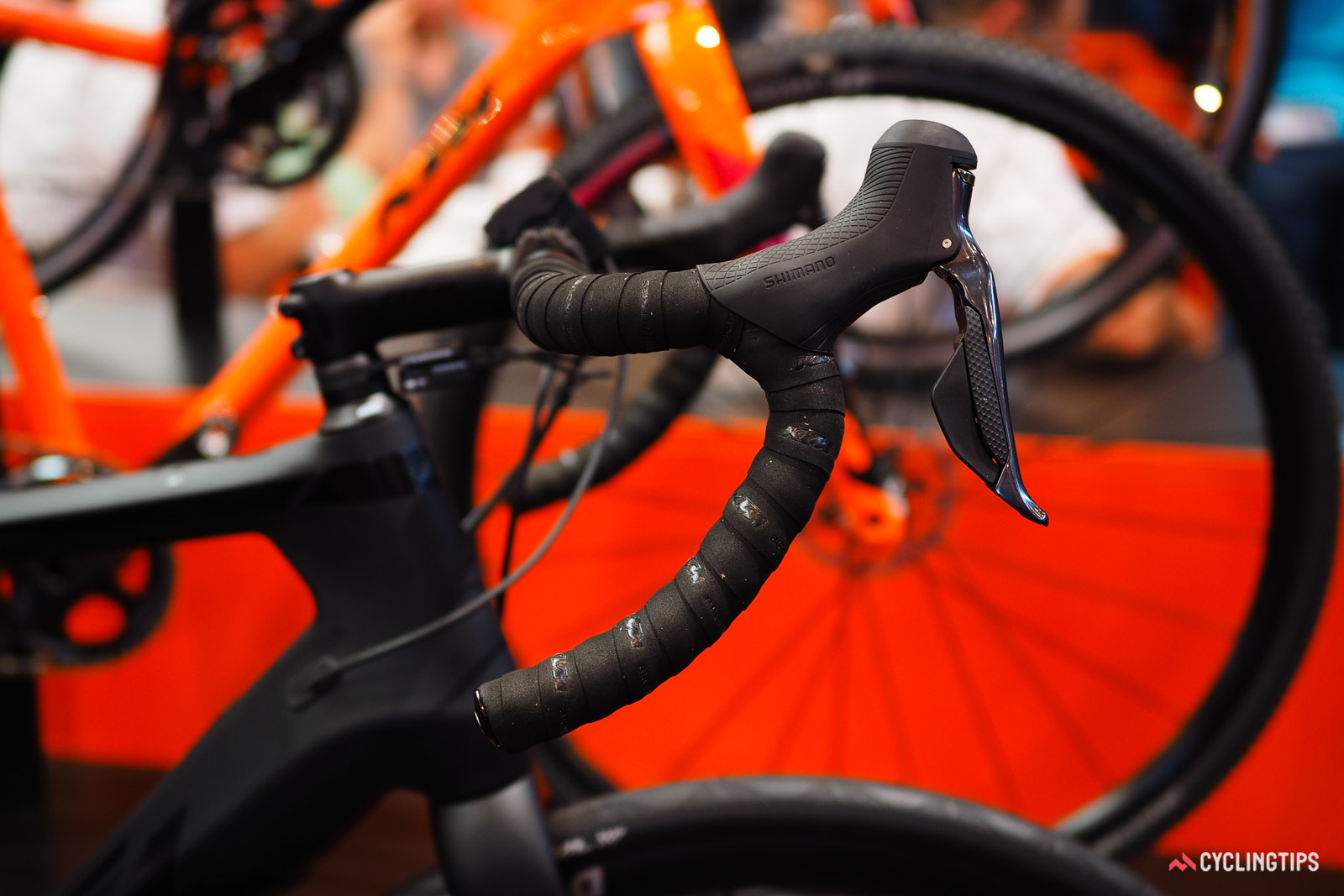 Also, if you had rotated your handlebars up to get the correct hood angle, that's not ideal, because it affects your position in the drops. It would be better to physically move your levers up on the bar. However, if you move them too far up, that also makes it harder to reach the levers in the drops.

As you noted, there is the R7025 lever designed for smaller hands (hydraulic brakes, mechanical shifting only), and I believe there's even an Ultegra version. Details on this model are a bit thin. This YouTube video by James the Bike Guy shows that the primary lever blade (the brake + downshift lever) is canted outwards a bit more than on the other 7000-series levers, plus it appears to have a shorter reach than the 7020 lever (however, the reviewer didn't explicitly say that the 7025's minimum reach is less than the 7020's minimum reach, and Shimano's documentation doesn't specifically tell us how much the reach can be adjusted.)

Secondarily, when you pull the brake lever, there might be too much free stroke before the pads engage the rotor (i.e. you can't adjust the bite point). It's been documented (note: YouTube vid by Rides of Japan) that when you minimize the lever reach on Shimano levers, you basically can't bring the bite point any closer to the lever. I don't think there's anything to be done about this, not within the same generation of Shimano levers. I don't know how SRAM and Campagnolo compare in this regard. If possible, you might try asking for a test ride on a SRAM equipped bike some day. Unfortunately, this is a lot trickier with Campagnolo, because that group has essentially zero OEM presence (i.e. basically no common bike companies have models stocked with Campy, possibly except for a few higher-end models stocked with Ekar, their 1x13 gravel group), so you'd have to find a friend with Campy and ask.

Third, consider the lever body's girth. This post on the Weight Weenies forum appears to show that the mechanical shifting version of the Ultegra levers has a girthier body than the Di2 version, probably because the electronics can be made smaller than the mechanical shifting innards. Unfortunately, this is where the R7025 and 8025 levers will be at a disadvantage: they're mechanical levers, so I would expect the lever bodies to also have wider girth than the Di2 bodies. If you feel like your existing hydraulic levers are a bit big in your hands and you feel like the Di2 levers are better, then unfortunately that's your answer. SRAM's current (12s generation released in 2019) Force and Red AXS levers are a bit girthier than Shimano's, but their Rival AXS levers (released 2021) are much closer to Shimano's Di2 levers.

Fourth, the length of the lever body itself could be too long. To my knowledge, this isn't a parameter many have considered. I believe that the first generation of 12 speed Shimano shifters (9200 and 8100) has lever bodies about 5mm longer than the previous (9100 and 8000) generation. I'm not sure how big a deal this is, but there aren't really any options apart from changing to a whole different manufacturer, if you can even find one that makes shorter lever bodies.

I have small man hands. XS in mitts.

GRX DI2 levers are a revelation. Only levers I haven’t had to reduce the reach to minimum on. Also changed pivot point so that breaking from hoods is much much easier. Not tried 7025 or 8025

Not the answer you're looking for? Browse other questions tagged shimano shifter shimano-di2 or ask your own question.