I have a bike with a left ST-R8020 hydraulic disc Ultegra lever, and I just noticed a large radial crack on a what seems to be part of the brake connection path (see picture). The crack seems to result from overtightening the screw at its center. At first I though this was a structural part, securing the lever to the handlebar, but it seems to be a cylinder, inside which the brake hose interfaces with the lever. The brake hose entrance is just before where the torque settings are printed. No brake fluid has leaked out. 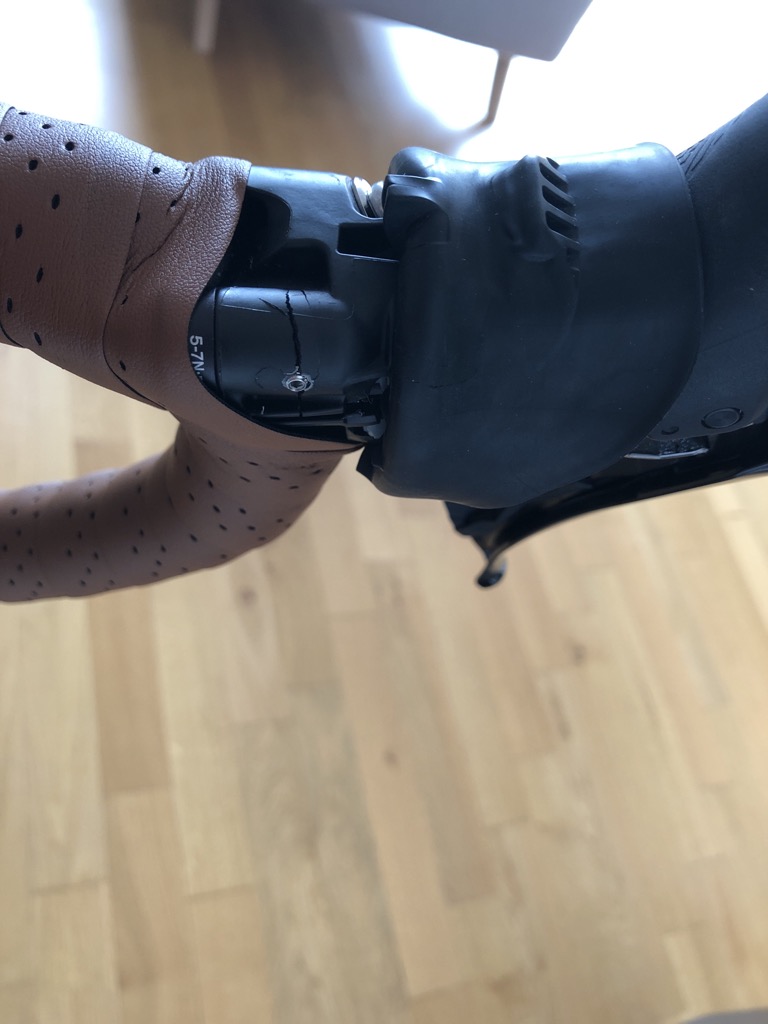 What may be the consequences of this crack? Will the brake connection likely leak in a near future as a result of this crack, or the lever fail in some other way? I have no experience with the lever internals or hydraulic brakes to be able to judge this situation.

You may have a hard time finding someone to tell you exactly what's under there in terms of the architecture and what part bears how much load, since replacement parts aren't available to service or replace the master cylinder on these. I'm going to make an educated guess here based on having done a master cylinder replacement on a road lever that parts exist for, the TRP Hylex: under the plastic there is probably a complete self-contained master cylinder unit, and the internal threads that the hose coupling bolt goes into are probably part of that. That part isn't broken yet, hence the brake still working. But if you ride it like this the master cylinder assembly will be getting reefed on by the rider, which is supposed to be the lever body's job, except it's broken now.

Ultegra warranty is two years so that's what I would pursue. I would not try to make this lever go the distance; it seems likely to not go well.

If it's out of warranty, one option is try to use epoxy to hold the lever body together. It's very at your own risk, but if you're going to keep using it regardless, it would probably be better than doing nothing.

Not the answer you're looking for? Browse other questions tagged road-bike shimano safety hydraulic-disc-brake brake-levers or ask your own question.