Cannot put a tire whatever I do

I cannot put a replacement tire on my rear wheel, whatever I do, have spent half a day on this. It just should not be so extremely difficult, I have tools and it is not the first tire I am replacing in my life. It looks as if the tire is just too small, but it has been bought up to specs. The bicycle has 27.5 inch wheels, 2.35 inch diameter tires. This is printed on the front tire that is original, and I bought another with exactly the same numbers. Once I needed to replace a tube on the front wheel and had absolutely no problem in removing the front tire and putting it back.

The clue may be that recently I had the rear wheel replaced. It visually still looks very close to 27.5 inch but could it be that they managed to put a slightly different size for me? The size is not printed on the wheel. What is the "27.5+" tire size I see in the shop? Maybe this is my new size now? Or should I try 29 inch tire?

Put the tyre on as much as you can (ie. bead in the rim all the way round as far around as possibly) hopefully leaving you with a small section that seems too small.

Now put the wheel on your feet, with the section of tyre that seems too small facing away from you and bend the tyre over the top, towards you, with your hands/fingers gripped over the top and thumbs on the back of the wheel. Now clench your fingers and grip/pull/bend the tyre towards you and onto the rim, pushing with your thumbs on the back of the rim. Should stretch it over.

I don't know why tyres are so hard to get on one time and seem to slip on another time. I think the position of the bead in the rim can make a big difference.

There are a few things I've found helpful when dealing with stubborn tires:

A problem occasionally seen with some tire/rim combinations is that the rim has a very narrow trough through the center and unless the rim bead is nestled deeply into that trough the last few inches of bead cannot be stretched over the edge of the rim.

When only the last 20 cm section of the tire remains on the "wrong" outer side of the rim (and on one side only), pushing one end of this section with the lifter into the right position results another end slipping back into wrong one. This looks like a rather pointless activity but it is not so: the tire somehow settles better as the pushed section travels around the rim, and finally the section start shortening till it becomes possible to end with it.

I my case I needed to use the two heavy duty metal lifters one behind another. The commonly sold plastic lifters I tried before were just bending themselves. I also tried the mounting pliers like this but while the tool looks solid and seriously built, there was no any use out of it in my case. Maybe it is for different type of tires or needs skills to be useful.

Anyway, after making half a revolution around the rim, the tire moved better into its final position and the gap started to shorten, till I was able to close it.

The method described by @CharakaSamawry was efficient when removing the old tire, and was almost working when putting the tire back on the rim, but the power required was more than my fingers can handle. It may work better for some mountain climber.

It is clearly a rogue rim and not a rogue tire, because all three tires I have are very difficult to put on and off. The rim was replaced in the workshop while replacing the freewheel. I still do not understand, is it just wrongly forged (slightly too large?) or meant for some different tire type. I include the photo of the marking that is printed on it: 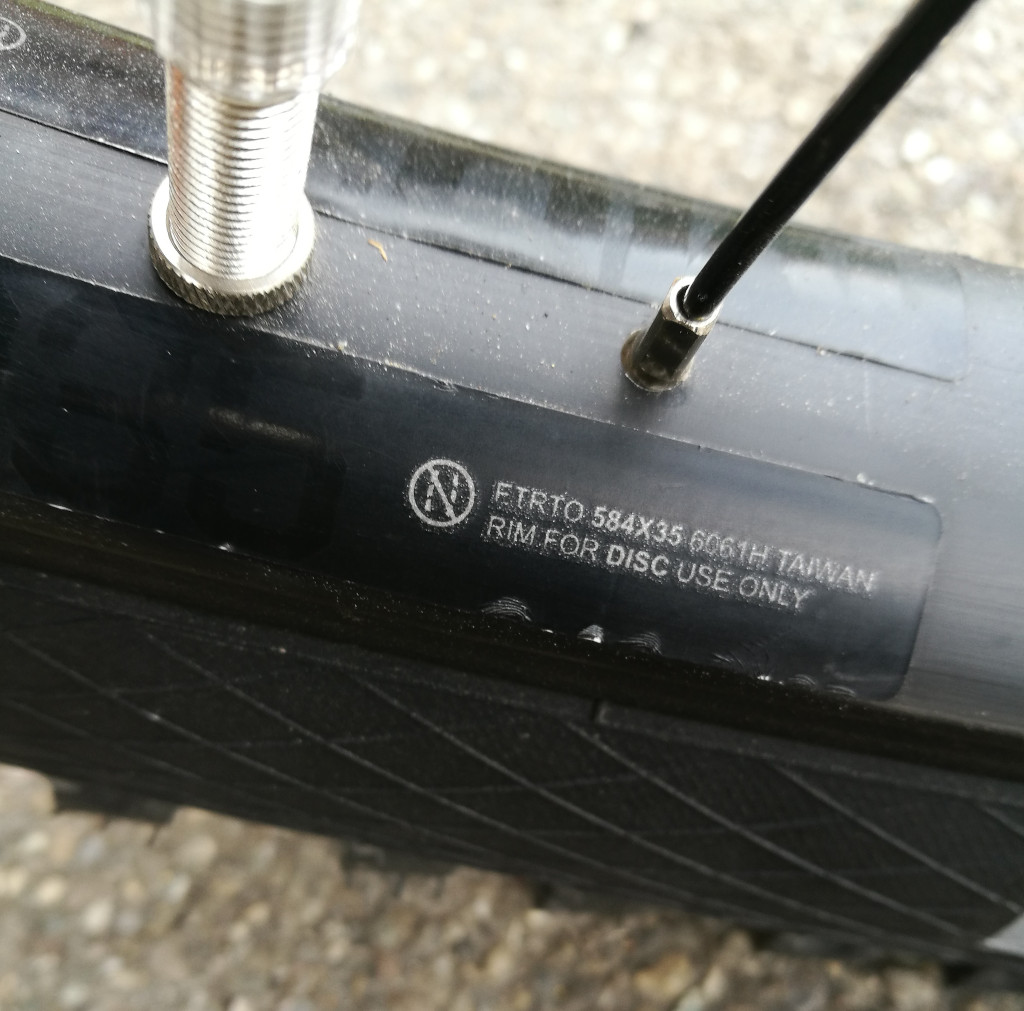 Not the answer you're looking for? Browse other questions tagged tire repair or ask your own question.

2
I need help replacing my bike's tube
8
I was in a collision the other day. What should I check?
3
Tire size / rear dropout incompatibility?
9
How do I determine my wheel size
9
Deformed/uneven/bumpy wheel/tire/tube, how to diagnose or repair?
2
Why does my Rear bike tire slow down when Pedaling?
1
Could someone confirm my assumption about Btwin Original 520 Hybrid front wheel?
3
Bump on tire near valve after tube replacement
2
Differing tire sizes on tread and side wall
0
Install tire on wheel