I have only just noticed that my bike dosen't seem to make a lot of noise when free wheeling, in fact it's pretty much silent. Is this down to the fact that I have been putting off a major clean?, is my bike damaged? or is my bike equipped with a silent freewheel that I didn't know existed?

I am currently riding a Scott Aspect 30 Mountain Bike

Your hub has a normal freewheel, like described by Matt Adams (ratchet with pawls).

Shimano had a Deore LX named "Silent Clutch" with this mechanism, but it was heavy. 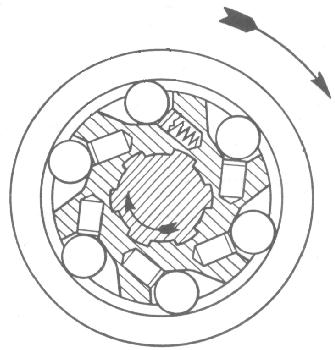 Also, I know at least one model (American Classic) which instead of the spring to load the pawls, have a rotary disc to engage and disengage the pawl, and a tiny hair-sized spring which act as the freewheel for this plate. It is a very silent and low-friction system: 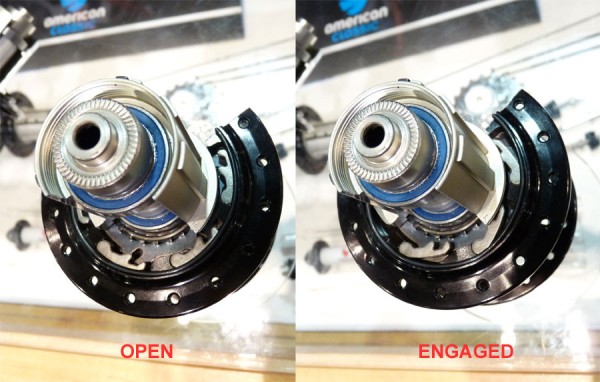 Short answer. Hub integrity can not really be judged by noise alone, but by feel. If you feel it slipping under load the hub could be damaged beyond repair. The quiet smooth feel, but working normally is just a good, sealed hub that the manufacturer built in a way that has smaller or less splines.

The full monty. A free wheel hub consists of a few key elements. The splined hub body, springs and pawls. The spline is a series of ramped teeth. Slipping one direction, gripping the other. This allows the coasting. Fancy hubs may have more splines than cheaper ones.

The pawls are little teeth that grip the spline, and are spring loaded to keep them engaged when the cassette body is spinning faster than the hub.

So as a hub wears, its usually the splines or the pawls loosing their crisp shape, or the springs in the pawls no longer being strong enough to keep the pawl engaged.

It very much depends on the freewheel mechanism in the hub, some make a nice "clickerty" noise, others are more silent.

The hub will be sealed and this should prevent dirt etc. getting into the mechanism. If anything it is likely to get noisier with penetration by dirt & grit rather than quieter.

Looking at the bike spec, my experience of Shimano hubs is they are quiet compared to other brands.

We had the Shimano "clutch hubs" on some of our police patrol bikes. Seem to work well, my bike is about 15 years old and it's been trouble free.

The performance aero wheels are loud. These companies employ the best engineers, and I am sure they are aware of the noise they create. It's marketing. You can hear a Zipp wheel being pushed through a parking lot. I think it is a lot like loud mufflers on a car. I am Mustang, hear me roar!

There are two major styles for freehubs and they relate to bearing placement. Shimano et al use an internal system that is heavier, but more durable and so much quieter. That is highlighted above.

Zipp, Envy, etc use external pawls that brush past a toothed ring pressed inside of the hub body. It makes a noise reminiscent of a playing card in the spokes while coasting.

Not the answer you're looking for? Browse other questions tagged freewheel noise or ask your own question.