Sit bones and the saddle's curves

Consider two twins, a brother and a sister.

They are of identical height. They have precisely the same arm length. Their legs (both femur and tibia) are exactly the same lengths. But, as would be expected, the woman has a larger distance between her sit bones.

They purchase one bike for both of them. The man gets it adjusted to fit him with expert advice. He rides it and is delighted with the bike fit.

When the woman takes the bike, she determines the distance between her sit bones and her brother's sit bones. She calculates, given the particular curves on the saddle they have, the exact distance she needs to move the saddle forward to keep all other distances constant (see figure), in particular the leg stroke and the arm reach. 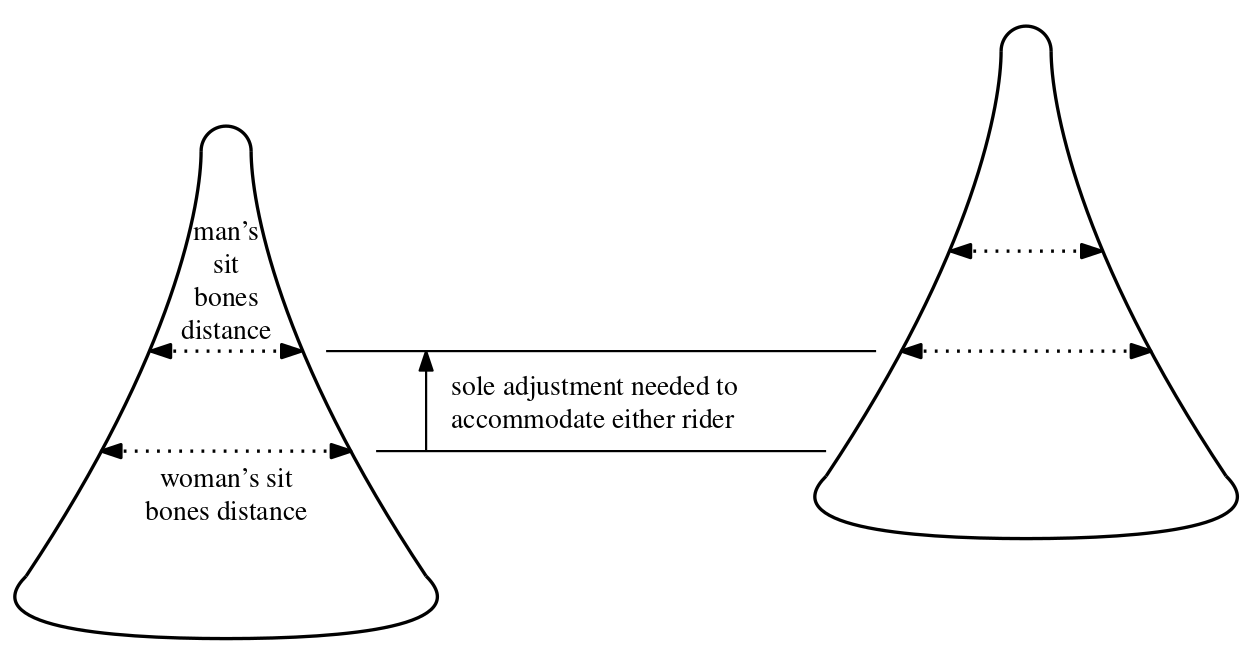 Does the thought experiment above make sense? Is this how bike fit, sit bone distance, and the curves on the saddle connect?

Context: I've been trying to convince friends and acquaintances who are newly jumping on the pandemic bike craze to skip buying a "comfort" bike with a "comfort" saddle, telling them that such a saddle is alright for 30 minutes of riding, but that the pressure on soft tissue will get worse on longer rides, and elaborating that the dominant shape of the bike saddle has these unusual curves to accommodate arbitrary distances between the sit bones of different cyclists. Rather than continue spreading misinformation, I thought I'd confirm the accuracy of my tales in this forum.

(If this is all true, who first introduced the particular curves on the bike saddle as we know it? Clearly this continues to evolve. The curves are different on different saddles. The relatively minor invention of padding the bike saddle appears to be due to Arthur L. Garford of Cleveland. It's interesting to know, in the pantheon of bike inventions, who contributed the different-sit-bone-widths-are-handled-by-just-one-bike-saddle invention.)

Secondary question: Crankarms that suit one of the two twins should suit the other, but should, ideally, the woman not also change the distance between the two crankarms (if the difference in sit bones widths is large enoug to warrant it)? Is this parameter accounted for on bikes labeled specifically a man's or a woman's bike?

This isn't how you use a bicycle saddle.

The sit bones are quite far away at the rear of the saddle. The saddle in your picture is one that is ideal for women. If a man moves the saddle backwards to have the correct width at the correct distance from handlebars and cranks, the man soon finds that the nose of the saddle is too short and the saddle feels strange. Also a saddle isn't a triangle. The shape of the contour is different at different points. So a saddle should be used only in such a manner that the sit bones are where they are intended to be.

The man and the woman need different width saddles. The saddle shouldn't be moved forwards / backwards.

With the saddle being important aspect of the bike fit, I would not recommend to compromise on it. Usually bike and rider are mapped 1:1. In this sharing scenario, It is good to get an additional saddle, saddle post and a quick release lever.

Not the answer you're looking for? Browse other questions tagged bike-fit saddle sit-bones or ask your own question.

48
Is it possible to measure your sit bones at home?

48
Is it possible to measure your sit bones at home?
1
What are the differences between Specialized Targa and Henge?
5
I can't sit on my sit bones
6
Getting the right cockpit position. Sliding forward. What should I adjust to keep my sit bones on the seat?
4
Where should my sit bones rest on a leather hammock/sling saddle?
27
Should my foot be able to step flat on the ground, when I sit on a bike seat?
6
I sit real far back on my saddle
2
How similar are saddles made by the same company?
2
How can I prepare for cycling 60 km, before getting the bike?
3
Can a conventional seat be reversed 180 degrees to be used as a noseless seat?