How much do bikes improve over the years? [closed]

I don’t think there is much room for improvement in entry level bikes. Their main priority is to be as cheap as possible. Adding features would increase price. They have been pretty much perfected on a cost vs. features/weight basis. It’s generally a cheap aluminium frame, 7 or 8 speed shifting (doesn’t require tight tolerances to work reliable-ish) and rim brakes.

Mid-level and obviously high-end bikes have seen a lot more new features and improvements. Most new features will be expensive for the manufacturer (because they require Research&Development, new manufacturing lines etc.). However, because they are new and unique they can be sold at a high price. As a feature becomes more commonplace and easier to mass-produce it trickles down to mid-level where it’s sold at more moderate prices.

To bring innovation and change to entry level bikes it would have to be cheaper to manufacture than existing bikes and their components.

For both model years of the Escape 3 the components are on the very low end, but the 2013 version had 3x8 shifting with Shimano Altus components while the 2021 has 3x7 with Shimano Tourney. The current version has slightly wider tyres (38mm vs 32mm) if that’s important to you.

The Escape 1 2013 had 3x9 Shimano Alivio shifting and a carbon fork.

Unfortunately Giant feels too insecure to state the weight of their bikes, so we don’t know which direction weight took. 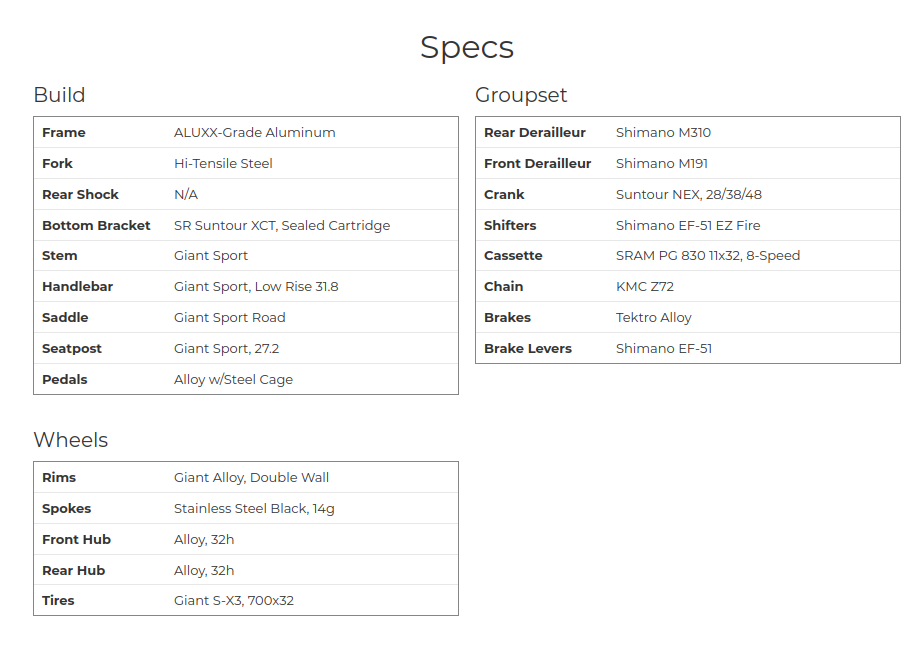 There is trickle-down in bike technology, so in some cases, a top-tier bike from about 10 years ago might be considered roughly on par with a 3rd-tier bike today (this is all subjective and in many cases the bikes might not be comparable).

In this particular example, it seems all the Giant Escape bikes are at the cheaper end of the spectrum. It takes a lot longer for innovations to trickle down, and it's a lot harder to entice the buyers in this segment with the new and shiny, so the companies don't have the incentive to churn their specifications the way they do at the top of the range. It looks like these models have changed very little since 2013.

The Giant Escape 3 bike indicated in the question is a unisex hybrid bike. In the 2021 spec, it has a triple chainring, a 7-speed cassette, V brakes, and a Tourney drivetrain. The frame is aluminum, with a hi-tensile steel fork.

I am not familiar with the evolution of Shimano’s Tourney group set, or groups at that price point. However, a brief inspection of the 2013 Giant Escape on Bicycle Blue Book appears to show the same general specifications, with a slightly better 3x8 speed drivetrain. The frame construction even appears to be similar (hydroformed aluminum tubes). I would guess that in this space, if you are not talking about comparing bikes that have gained hydraulic disc brakes to rim brakes, current day bikes may be quite comparable to bikes from 10 years ago.

If you are comparing bikes with vastly different braking systems, this may be another story. My qualitative judgment, and keeping mind I don’t own bikes at this price point, is that rim vs non-hydraulic disc is comparable, and I would actually favor rim brakes. Rim brakes are less complex. Lower end mechanical disc brakes don’t always have great braking power, and you really do need better cable housing to maximize their potential. Discs do stop better in the wet than rim brakes, but many people don’t ride in the wet. Maintenance requirements are probably less on rim brakes. Comparing hydraulic disc to rim is potentially different. Hydraulic discs are more complex and pricier. However, it is possible that they need less maintenance over time versus rim brakes - you may need to bleed the system less often than you would need to replace cables, and if you don’t need a bleed, the hydraulic lines may not wear out the same way that cables do. That said, any maintenance you do need on a hydraulic disc brake will be more complex than a rim brake.

In performance road biking, if we are focusing on the highest level bikes, a lot of the evolution has been in aerodynamics. The groups have also evolved, basically going from rim brakes to hydraulic disc brakes. Qualitatively, I would judge the difference between road bikes from 2000 and 2010 to be a lot smaller than 2010 vs 2020. In some ways, the road bike space has seen less drastic changes than MTBs, at least if we exclude the top end performance road bikes. There has, however, been a substantial change in design paradigms for drop bar bikes in general. Endurance road bikes, I.e. more leisure-oriented road bikes that are not narrowly aimed at going very fast on smooth roads, have become a thing. They were not quite a thing 10 years ago. Also, the gearing has changed a lot, with road bikes getting much lower gears that are more suited for everyday riders.

Basically, the question is difficult to answer. Many categories of bicycles and components may not have evolved substantially over the last 10 years. My understanding is that for performance MTBs, the improvements are really substantial. For performance road bikes, the gain is less obvious if you are not going really fast.

Juhist gets a lot right but not everything:

My opinion is that the improvement in bike technology has mostly stopped decades ago, and in many matters the technology continues not to improve but to worsen.

About the only thing that is certain is that standards are removed from use for no good reason at all. If you buy a bike today and want to repair it 30 years from now, many parts can't be found anymore.

1
Raising the bars on a stock Giant Escape Hybrid
4
Why can compact frame in road bikes be made in less sizes than the traditional frame?
0
What are the main differences in Giant's Toughroad and Revolt drop-bar bike series?
1
Giant ATX vs Escape?
2
Where is the light harness connection on Giant Roam E bike?
0
Geometry equivalence between Giant Contend 2 and Fuji Feather