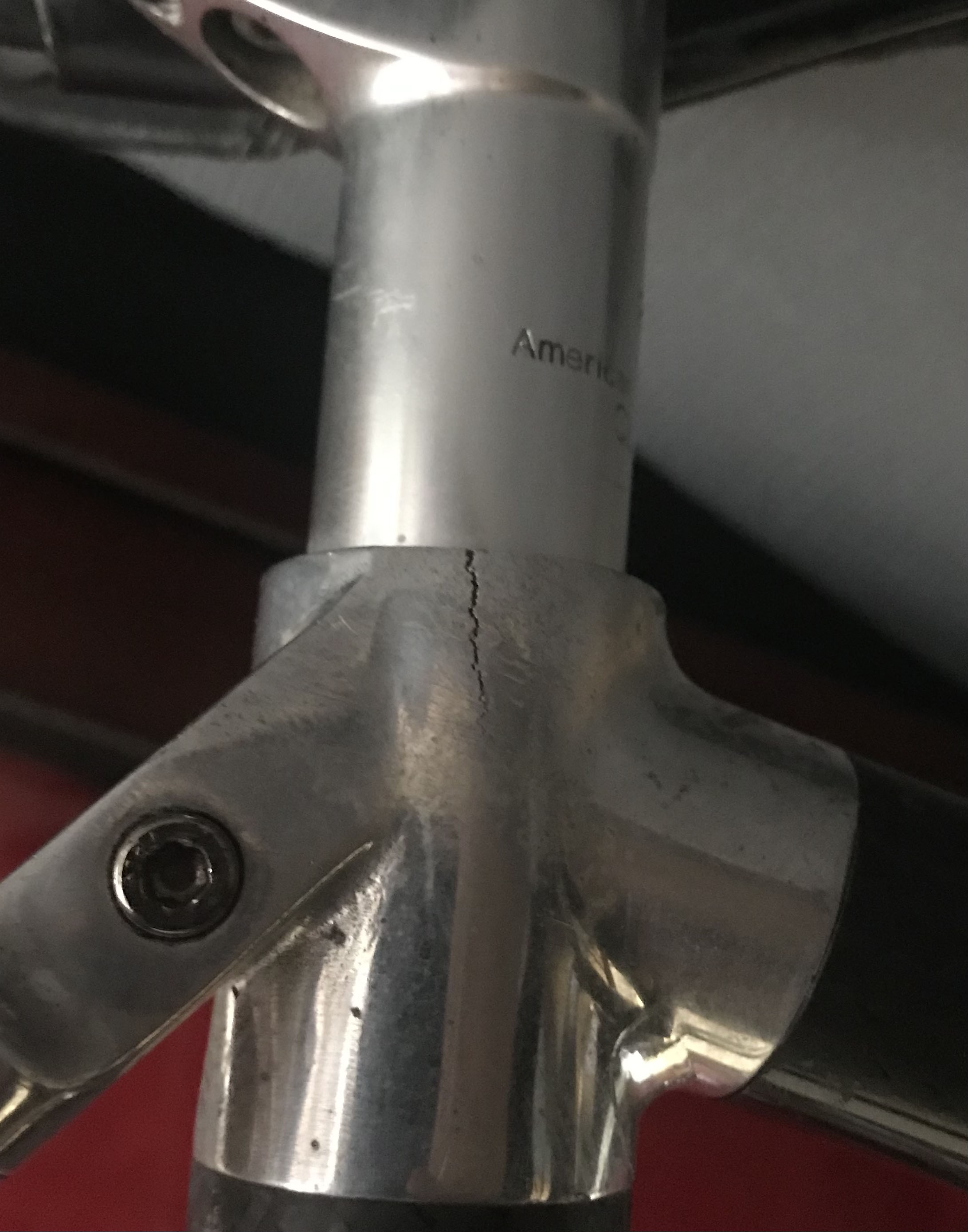 I recently bought this old road bike and just noticed this little crack. Any advice on how to handle this? Can I reinforce it somehow? It's aluminum and carbon fiber frame.

The problem you're up against here is the cracked area of the seat lug is probably taking significant load in the original configuration of the seat cluster design. That implies you have to make it strong again and/or change how the part is being loaded. Just drilling the end of it to stop the propagation probably isn't enough to avoid problems with it continuing to open or other areas getting overloaded. It may even not be enough to still allow you to properly secure the seatpost, since the seatpost binder will be trying to pull the crack open.

Likely candidates for how this happened would be simple fatigue, over-torquing the binder bolt, installing an undersize seatpost, and/or installing a seatpost above the minimum insertion. Looking at it, it seems likely to be some combination of the first three. Riding for a long time with a nominally correct but physically undersize post could easily do this, as could trying to tighten down on an incorrect size post. Chunky and strong aluminum parts have very low tolerance for that kind of thing, and will tend to crack rather than yield.

If one had to get more life out of this frame using relatively simple means, one approach would be get a thick-walled, strong, not too expensive correctly sized seatpost (a Kalloy Uno would be a good choice), roughen and clean the seatpost bore, remove the binder bolt, drill the end of the crack, and bond the seatpost in at a fixed height with epoxy. The idea here is that you're adding frame structure to take stress off the cracked area and also eliminating the need for the seat lug to be flexed closed. It's a little like simply adding a bunch of material to the lug. All the bonded contact area you're creating may be able to reinforce the area sufficiently that the stress riser of the crack and all the previous fatigue is less of a concern. Drilling the end of the crack to prevent propagation is still critical.

A much more involved take on the same concept would be turn it into a seatmast frame to still have height adjustment. There are aftermarket seatmast toppers for round tubes that could be adapted.

I'm not saying any of the above is a good idea per se, but it's something that could be done if trashing it isn't an option. The major concern would be that rider weight on the saddle is going to want to open up the crack further no matter what you do, and also that frames like this are simply all very old now and trying to get more out of it may be unrealistic, especially if the crack occurred as a result of fatigue and not abuse.

That lug has already failed, and is in danger of cracking completely through.

I would not ride that bike as-is.

Things you could do with the bike:

Upshot: I think your bike is dead, and you've done well to notice before you suffered a catastrophic failure.

Unfortunately, the frame is dead. Carbon tubes can be repaired - a repairer would (from what I know of the process through podcasts) sand off the damaged area, then apply and bond carbon fiber sheets to the area. Aluminum can't be cost-effectively repaired; in theory, you could weld the crack closed, but you'd need to heat treat the frame to restore its strength, and that bit is the part that would make it not cost effective, as you'd need to strip the parts and paint first.

Here, you have the additional complication that the carbon tubes are bonded into the aluminum lug. This style of construction was, as I recall, popular on earlier carbon frames. If you could weld that lug or even source a replacement, you would need to disbond the carbon tubes first, then re-bond them.

I have heard that in the aerospace and defense industries, it is possible to bond carbon sheets over aluminum. I don't think that type of repair is a common thing in the cycling world, however. If you have a local carbon fiber repairer who you know has some aerospace or defense experience, you could ask.

Not the answer you're looking for? Browse other questions tagged crack or ask your own question.

9
Titanium frame has a crack - advice needed
1
Crack on Carbon Frame?
4
Did my bike frame crack?
3
How to check carbon frame for cracks
11
Crack in fork or just paint
4
A carbon fracture or a paint crack?
4
Is this crack on my seat stay mechanically safe?
2
Does this carbon fork have a crack in it that would make you replace it?
2
Vertical mark on chainstay?