Do cargo "trailers" mounted in front of the bike exist?

As the title says. You would be pushing the 'trailer' rather than pulling it. Does this exist?

The one advantage over a trailer would be you can see your cargo.

My very basic design idea is to attach the cargo carrier to the axle of the front wheel (allowing up and down tilt to get over curbs) and have one free to castor 20" wheel in front. Steering would be harder since you have to move the whole "trailer" but it's hard to say by how much.

In summary I think it's possible to build and ride around with such a thing. But does it exist as a commercial product or diy project?

ETA: Apparently my wording was not clear enough: I'm not looking for a cargo bike with the cargo in front (like a bullit or backfiets or babboe or flying pigeon or or or ...) but for something that attaches to the bike unlike a trailer, namely in the front. Also I'm honestly at loss what to do with the answers - most of you point out relevant problems, none tackle the actual question (though the answer is likely no, and this is always hard to answer).

There is technology for this, has been there for many years, called 'bakfiets' in Dutch. A bike with a big load bed in front of the rider.

The problem with containers which are not on the bike/trike itself but running on their own wheels is that you need pretty big wheels for the container to move over uneven bits of the road, and you need a good connection to the part of the bike you sit on, with a good option to steer, as you will need both parts to move together and turn the front part or the wheels under it in a way that will steer the whole of the combination.

As a recumbent rider I have ridden some 'strange' bikes/trikes and in the past I have rented a 'bakfiets' as the one in the picture (see link above.) And I have moved many loads on their own wheels as well while walking in front of them and behind them, and never found it easy to steer a load in front of me.

That brings me to two reasons to have big loads behind the rider.

For smaller loads there are many different kinds of bikes, with load beds in different positions, before and behind the rider, before, above or behind the steering wheel(s). But I have never seen or heard about a kind of bike that takes up containers on their own wheels.

With one exception, there are several ways to combine a wheelchair and a bike behind it, sometimes using the big wheels of the chair, (tilting the chair so the smaller wheels are off the ground,) and most of those are a dedicated combination, where only one brand/make of wheelchair and only one kind of bike can be used to make a working team. A google search revealed at least three but no usable photos for here.

What you're proposing would not work: your design would effectively be steering from the middle of the (combined) vehicle. You would need to transmit the turning action to the frontmost wheel, which is what a bakfiets does. There are cargo bikes with small front wheels and load decks above them (and conversion forks for same), and there is a converter that turns the bike into a trike with a load deck between the front wheels.

Most of the steering on a regular bicycle is done by tilting the bike and letting the tilt turn the front wheel, so simply attaching a two-wheeled cart to a regular fork would not work. It would also be difficult to do a more radical aftermarket addition by replacing the entire front wheel because you would need to put weight on the steering mechanism of the cart.

In conclusion, you would be looking at a replacement of the fork itself and face some challenges in keeping the cart body steady in relation to the frame, so you would probably be better off getting a purpose built cargo bike or making the modification fairly permanent.

Do cargo "trailers" mounted in front of the bike exist?

But does it exist as a commercial product or diy project?

My very basic design idea is to attach the cargo carrier to the axle of the front wheel (allowing up and down tilt to get over curbs) and have one free to castor 20" wheel in front.

Here is a rough sketch of the device in question. 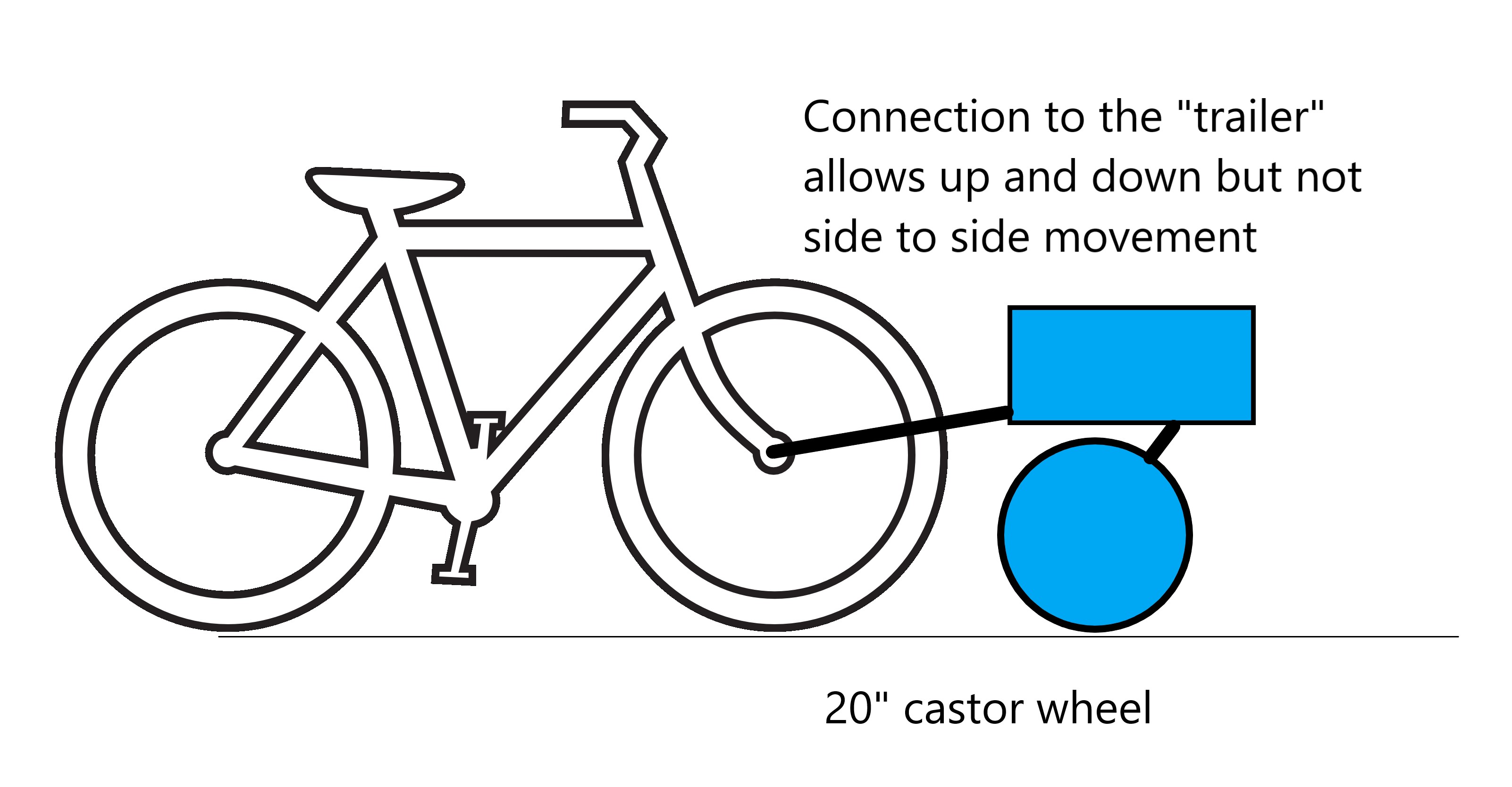 An attachable "preceder" (since it does not trail the bike it can't be a trailer) will be difficult if not impossible to steer. The amount of leverage the handlebars provide to control the front wheel is much less than the leverage exerted by the preceder. With the added weight of cargo the situation becomes much worse.

Riding with 5 pounds of cargo in a handlebar bag dramatically effects steering but it's manageable. This would be orders of magnitude worse.

No, an attachable wheeled cargo device that mounts to the front axle does not exist as a commercial product or a diy project. (unless you start your own diy project)

It is much easier, cheaper and safer to attach cargo to the front of the bike using one of the multitude of front racks, baskets or panniers available. 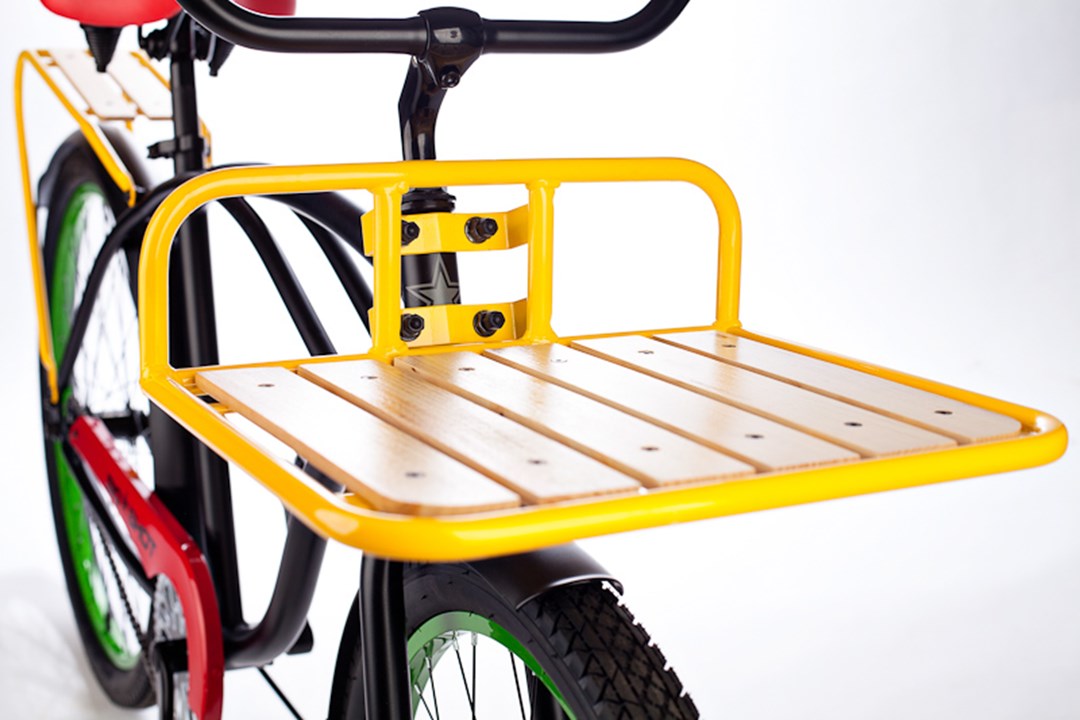 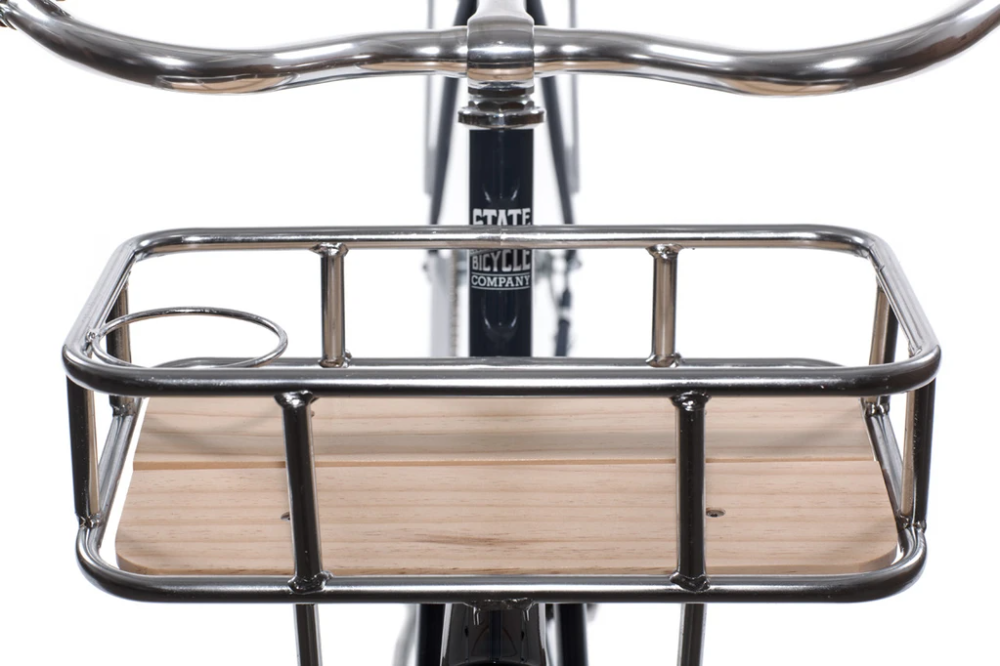 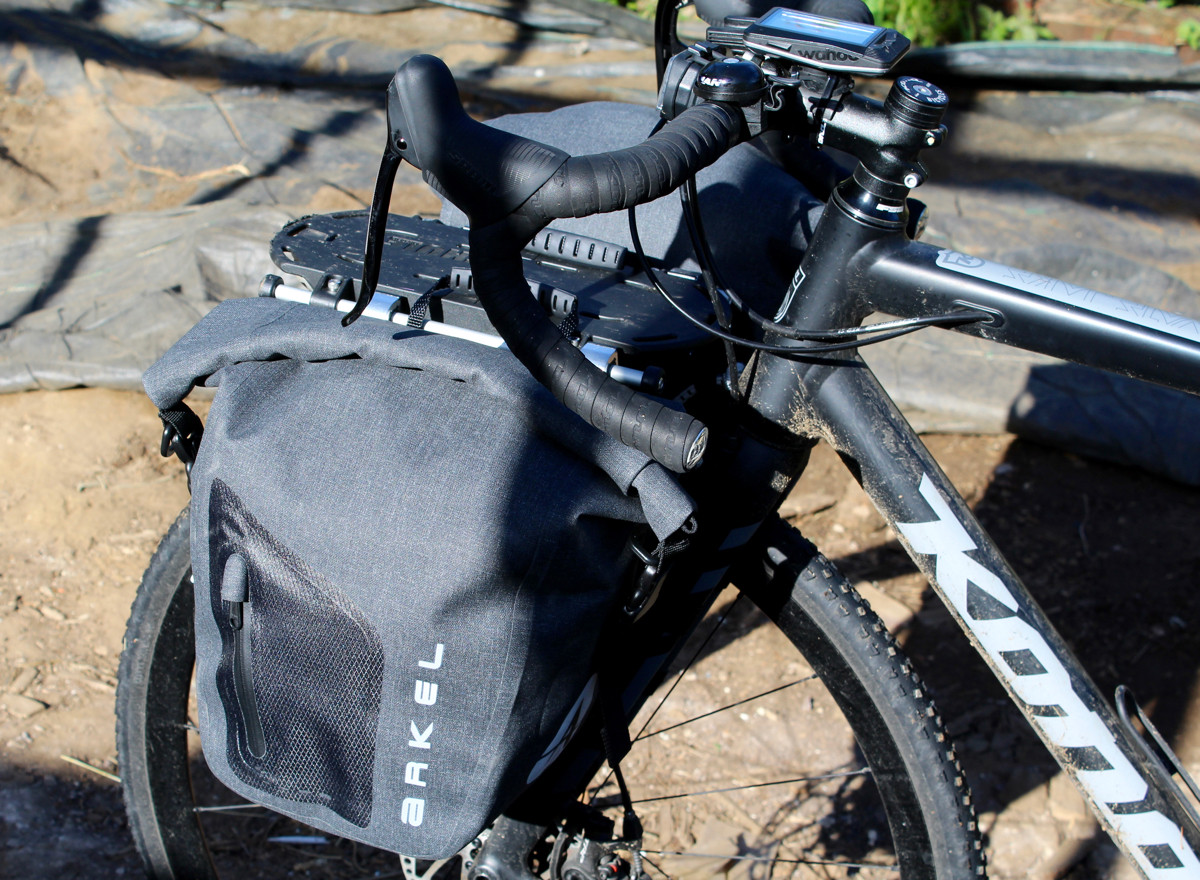 It would be wonderful if you built one and rode it with video of the whole experience. Please be sure to post a link in your question.

Even aside from bikes, i cannot think of any cargo trailer in a push setup. Not with cars, trucks or any other wheeled vehicle. The inherent problem with pushed trailers is that you always have the extra pivoting point that you´d have to control, the same one that makes reversing a car with trailer more difficult than driving forward.

The only setup that i know of with pushed cargo is a push barge where a pusher "tug" pushes loaded barges along a river. This setup is only viable because:

Not the answer you're looking for? Browse other questions tagged cargo or ask your own question.

18
One vs. Two wheeled bike trailers
5
Carrying a Carradice Camper Longflap when off the bike
20
How to keep a huge cargo bike safe in the city?
1
Medium size cargo solution for road-bike for commuting
3
Grocery Shopping by bike, expanding my cargo options cheaply
10
Converting tandem to cargo bike
13
What are the differences between a seatpost-mounted and frame-mounted rear rack
1
Cargo bike with steering linkage
1
Why does a Bella cargo bike not act like a car driving in reverse?