Ways to hear kid on back seat

I looking for suggestions, ideas and/or devices to solve this problem:

On an entry-level somewhat old mountain bike, at the back, there is a child seat. On the seat there is a child, around 4 years old. This setup is for commuting to and from school, a 40 minute ride. It is possible to hear that the child speaks, but it is very difficult to understand what the child says (barring yelling or screaming).

Is there any way to have conversations while riding?

Never going to work well with the child behind you, especially if there is traffic noise around. Consider putting the child in front of you on a frame mounted seat, still might be hard to hear, but will be easier to get you ear close to the child, and they naturally turn to try and face you when they want your attention.

There's no good way to hear a rear-seat passenger if the ambient noise volume is high. You can agree on signals like "poke twice means stop" and then talk more once halted.

I always recommend the child seats that sit between bars and saddle. There are many brands, but "WeeRide" is searchable. 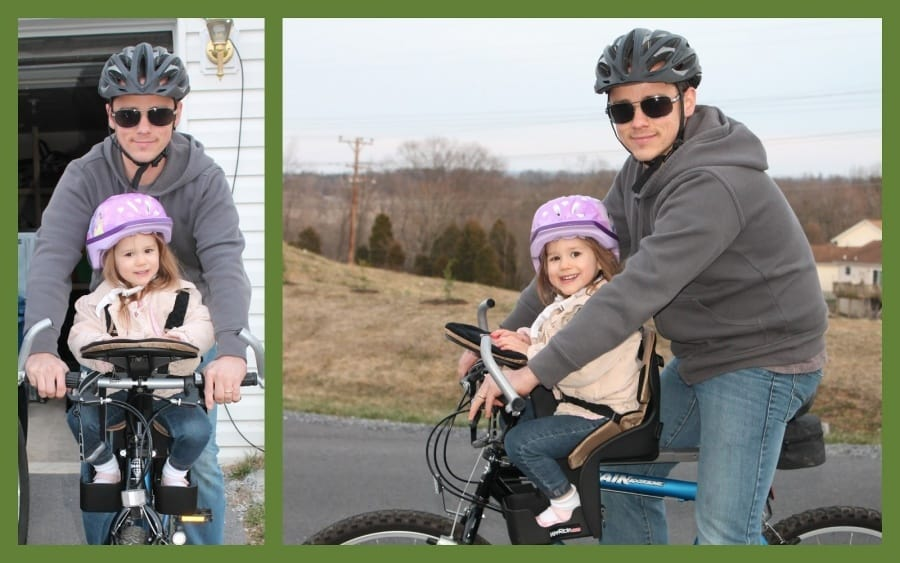 The kid is more central so it stops the bike from becoming rear-heavy, and you can lean in and talk much better.

It's difficult. I had rear seats from 8 months to 7 years. With traffic around, a conversation is essentially impossible.

My routine rides with my daughter were shorter than yours, though on holiday they could be a lot longer. While this didn't work when she was a baby:

I would resist all intercom-like solutions that involve headphones (of any kind except bone conduction, and even if only one earpiece is used), as I found that I used my ears even more when riding with a passenger. That's partly because of going a bit slower, trying to avoid more of the bumps, and trying to tuck in at the last moment if it sounded like a close pass was imminent. Also if the intercom failed, you'd then have even more trouble hearing a yell from behind you.

But if you did have bone conduction headphones, there are crude but effective devices designed to be worn round the neck of someone hard of hearing, to amplify conversation ("hearing amplifiers"). Mounting one of these on your back would allow it to relay the child's voice, but check it's got a standard headphone socket.

In these days it is possible to buy bicycle helmets with Bluetooth intercom like this just I do not know if any child helmet is equipped with them. Who knows, the smallest size on minimal setting may potentially fit.

As I understand, these intercoms have loudspeakers, not headphones, so should not interfere with your hearing as long as there is no communication ongoing. The red light at the back these helmets usually have would also be beneficial for the safety.

Unless the place is really not good for stopping, just stop immediately, put a foot on the ground, turn around and sort the things out. There are not many problems you can solve while still riding anyway and some may really need immediate attention.

Do this also periodically as a routine check. The child likes to see she is not just forgotten.

Registered just to place this answer:

It might be a bit weird, but how about a funnel? You take a funnel, add a rigid hose (like a pvc hose) to it which is aimed at your ear.

If you find a way to attach it somewhere between your upper arm and body, aimed at the child, and attach the hose to the upper part of you shoulder, you're good to go.

You can find black materials if you would like it less visible (or a color similar to your jacket). Again, a odd solution, but very low cost and a possibly fun solution!

PS: The downside to using hardware like bluetooth is that there is a delay. Even a 0.3sec delay will work very confusing, hearing yourself talk and 0.3s later again is very disruptive, more than you'd think.

I'm assuming your problem is one way, you can't hear your child but you can speak loud enough for him/her to understand you, so I'm pretty sure this is a hearing aid amplifier use case. There are some with bone conduction headset and relocatable/aim-able microphone.

You could place the microphone on your back, close enough to pick your child's voice, so the apparatus is fully on your body, diminishing the need for the child to wear an uncomfortable device.

Just a few minutes of search turned out some interesting results, I used the following search terms: "hearing aid headset with microphone". And this is the one that caught my attention: https://www.amazon.com/Bone-Conduction-Hearing-Aid-Seniors/dp/B08M9DQ2JG/ref=sr_1_12?crid=OUEANOJ22IQM&keywords=hearing+aid+headset+with+microphone&qid=1636640208&sprefix=hearing+aid+microphone+and+head%2Caps%2C269&sr=8-12

I'm not trying to give product recommendation as I've never been a user of these equipment nor work for any related company.

I once knew a person with hearing problems, who was always wearing headphones. Later I found that this person had programmed something for using the smartphone as hearing aid. I do not know how this can be done, but I'm also sure that by now there are multitude of available apps for that. For this, I've seen wired microphone for smartphone with regular headphone output jack, so you could fix the microphone on the back of your jacket, route the cable to a designated pocket where you put the phone, and do the same with your preferred headphone. Search for "lavalier microphone with headphone output"

I´ve never tried bone conduction headphones, and I do not endorse use of headphones while cycling on routes with automotive traffic or the like, but I have used regular over the ear headphones worn not directly over the ear, but close enough to hear the music. This can also block wind noise to the ear.

I think a fully wired solution can be more practical, as will not require to keep multiple batteries charged, except for the phone, which most of us already do, and the full setup can be made "wearable" so it takes no more time than putting on a coat.

I have also used a bluetooth speaker inside the top of a backpack for riding in the city, The speaker volume is set close to a normal conversation loudness, so when there are no other vehicles close I can clearly hear the music, but just the rolling noise of car tires is enough to overcome the speaker, so the risk of not hearing an approaching car, siren, etc. is really low. I later found that this concept of using an open air speaker near the ears at low volume, does exist commercially: "neck speaker". The idea would be to make your child's voice louder. Again, you could combine this speaker with a suitable hearing aid or microphone amplifier.

Related anecdote: When I was a kid I had a small handheld voice recorder (the ones that used micro cassettes). The thing had headphone output and I really liked to use it to better hear faint noises, or as a rather poor electric stethoscope by pressing the recorder's mic into my chest. If by any chance you already had access to a similar device, you could try the concept before investing in more specific accessories.

As your child can hear you, facing away from her, but you can not hear her, facing to you, it is either your hearing or her not talking loud enough.

In either case it might be possible to 'train' her to speak in a way that does reach you. No tech, just using her voice louder or in a higher pitch, or even a lower pitch, till it comes through to you.
This is not screaming or yelling, just talking louder and does occure naturally when in a big group like in the play area at school.

Give it a few weeks and work on telling her to repeat louder if you do not understand her.

Not the answer you're looking for? Browse other questions tagged commuter child-seat or ask your own question.

21
Is there a way to know if someone is drafting behind without turning your head back or trying to hear the noises?

3
Child seat (or rack) at the seat post
4
Single speed bike with child seat?
2
Can the iBert safe-T-seat be safely mounted behind the seat post?
2
What child seat would fit an old model Gary Fisher bike?
2
Not enough space between front mounted child bike seat and rider
6
Is it safe to put child seat on drivers seat post?
1
Removing cushion from Aldi Bikemate Boodie seat
1
Middle-aged child seat
8
Child seat: how to protect my child's face from rain and wind?