Which part(s) has the greatest slope of price per pound(kg)?

Just pulled the trigger on a Specialized Allez (61 frame) road bike, since I am getting back into riding. While the Allez does have a carbon-fiber fork and aluminum frame, I think the wheels could be lighter and question other parts that could be replaced. So I looked at upgrades and noticed a Trek Emonda (~$3k) was not bad. Then looked at some Domanes, and there was an "endurance" for (~$4k) and a Domane triathlon for (~$6k). The endurance Domane was very light and had wider tires, but the triathlon Domane had skinny wheels that were carbon-fiber. Unfortunately, for my taste I thought that it would be better to have either a hybrid with the triathlon wheels on the endurance bike, or a hybrid with the endurance handle bars, cables, brake handles, on the triathlon bike.

Given the above, it's known that you have to pay more for lighter parts, hence, the price-per-pound goes up. Thinking about a plot of price vs. pound for a specific part, a part that gets expensive quickly with decreasing weight will have a lower slope (price/pound) than a part that sheds a lot of weight but costs less per pound --> greater slope.

So as a rule-of-thumb, which parts typically have a greater slope which allow you ditch more weight with less cost? What would be the order of lowest slope per part for wheels, brakes, crank, derailleurs, neck, seat post, cables?

Slope is actually negative for a plot of price per pound. Using the attached cartoon, a strong negative slope implies that for each additional pound, you pay maybe $2800 less, hence slope is -$2800 / per increasing pound -- or, for each decreasing pound you pay $2800 more. Ideal part would be as each pound is added, you pay $300 less and not $2800 less, same as, each pound lost costs $300 more - Utopia!

(slope means change in price divided by change in weight between 2 or more bikes. The price of a single bike, like $15000 that weighs 15 pounds does not give you slope. Slope requires comparison via differentials with one or more bikes that costs $1000 and weighs 20 pounds). 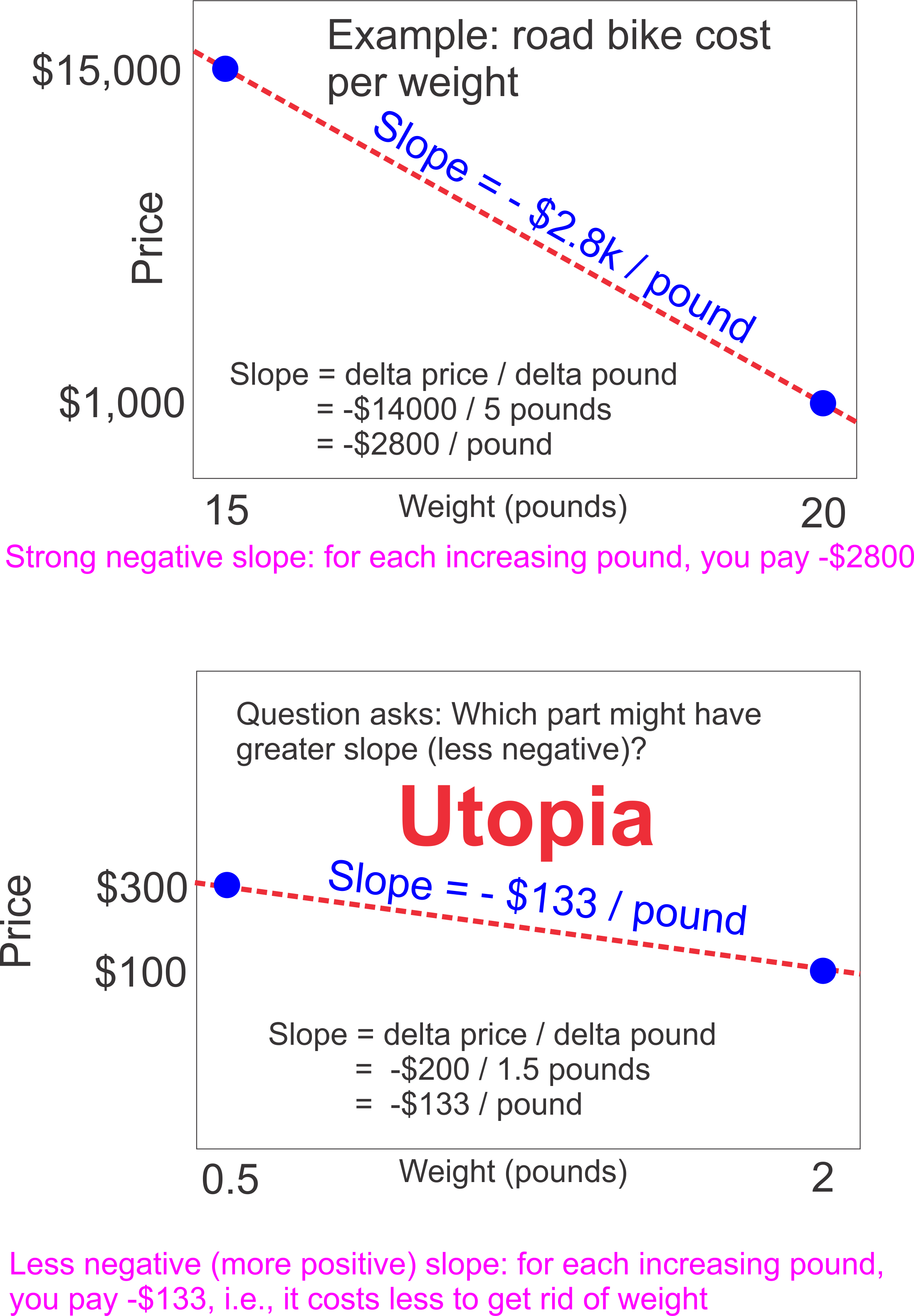 The full answer is long and complicated but the short answer is almost surely 1) the proper air pressure at zero cost (meaning, zero slope in terms of price/kg); followed by 2) latex tubes (at a price premium over butyl tubes of just a few dollars; and 3) the proper tires.

The attached figure gives an example of how even small changes in coefficient of rolling resistance can have large overall effects, and is the basis for the aphorism, "if you're a weight weenie you should definitely also be a Crr weenie." For a fuller response (though still not completely full response, which requires some mathematical reasoning), you can watch this Youtube video: 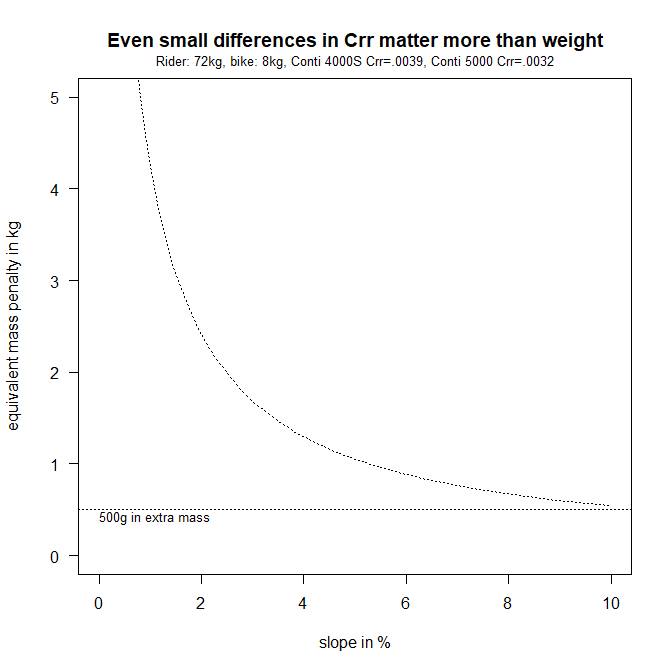 Do also consider durability - it is a common misconception that more expensive things last longer, and while that may be true comparing mid-range to cheap stuff, the top-end parts tend to have a shorter effective lifespan than mid-range parts.

The classic cycling example is Shimano Dura-Ace, built to be lightweight for high-end racing, compared to Ultegra which is the same shape but made of more durable parts, and therefore weighs more while costing less.

The ultimate example of that is motorsport engines. A Formula 1 engine that could do double the length of a race is overbuilt and can be lightened. I'd much rather have parts that survive.

I think there is no easy answer. Which part you should upgrade first very much depends on what’s currently on the bike. But keep in mind, if there was an easy and cheap option the bike manufacturer would have probably picked it already.

Many ~2000€ road bikes come with a relatively cheap and heavy wheelset around 1750g. For 850€ you can get a 1230g wheelset reducing your weight by more than half a kilogram. However this lighter wheelset is probably more fragile. With wheelsets it often also makes sense to improve aerodynamics at a slight cost in weight. So maybe it would have made sense to get a slightly heavier but more aero wheelset.

If you don’t need much saddle padding you can get a more or less pure carbon saddle for ~170€ which will weigh less than 100g compared to a normal saddle at ~250g for ~70€.

If the bike comes with Shimano Ultegra it doesn’t really make sense to upgrade to Dura Ace for the weight saving alone. The biggest Ultegra->DuraAce weight saving is in the cassette, which is a wear part.

In the end there is not a single component you can upgrade (on its own) to reduce bike weight a lot. After all, most components by themselves weigh much less than 1kg. So the potential for weight reduction is limited. 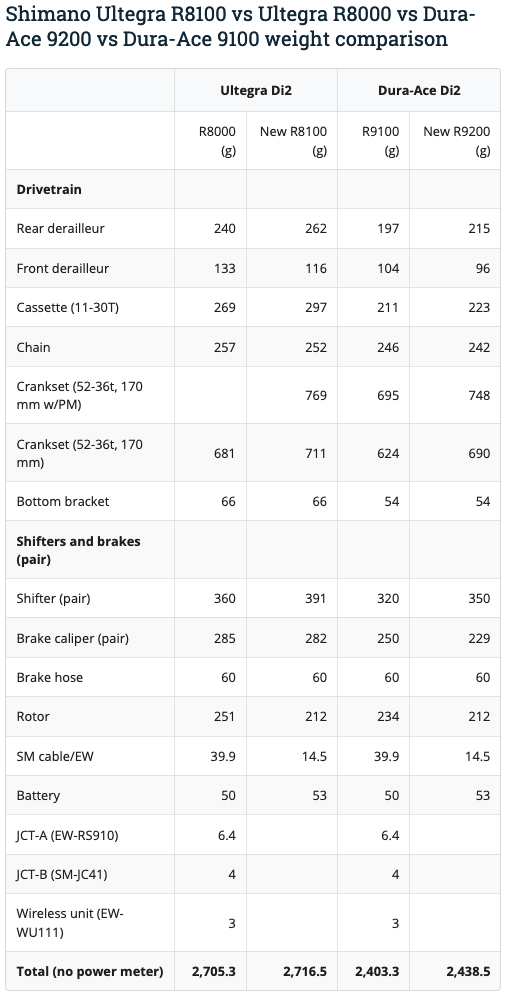 You could also abandon some parts (like the bar tape), making it a replacement that cost less than nothing but still provides weight savings. Other than that, though, ride it for a while. Latex tubes are much lighter for the price, but don't hold air pressure as well. You might choose to replace some parts for reasons other than weight (like going to a compact crankset will help with both weight and climbing, but be bad for maximum speed).

Having been part of a lightweight vehicle competition in college, the answer to reducing mass is often to remove anything unnecessary for work and safety and to replace any part you can with zip ties, which are lightweight, durable, and cheap the the point of being nearly free!

Further, as noted in other answers, you'll get more performance on very flat and smooth roads ("ideal conditions"?) by reducing the rolling resistance, but this will make your bicycle perform worse or more dangerously for less-smooth terrains

For more performance per price (low slope to high)

However, to directly answer your question:

What would be the order of lowest slope per part for wheels, brakes, crank, derailleurs, neck, seat post, cables?

You could also consider a unicycle, disposing of all or at least half of most parts (beware: this will be slower under non-circus conditions!)

Not the answer you're looking for? Browse other questions tagged road-bike weight trek specialized-bikes price or ask your own question.

2
What makes one road tire have a less "bouncy" ride than another?
13
Are aerodynamic rims worth additional weight?
5
How much does a typical cardboard bike box weigh?
10
belt vs chain for what matters performance only
10
How does weight influence your speed when descending?
1
Need new chainwheels for a cheap racing bike - which price range makes sense?
2
Heavier or lighter?
1
Would these upgrades give me a better bike than I could buy with my budget plus the sale of my current bike?
13
Is it worth buying a high end light bike (8.5 kg) from 80' vs recent mid range bike (10kg)