How do I rebuild Shimano XTR brake levers?

My right brake lever (Shimano BL-M9020 to be specific) has attracted some dirt around the blade pivot area, and some parts look shiny. I suspect the master piston seals are starting to leak. Replacing the entire lever is the guaranteed safe solution, but I cannot afford to do so and I'm unsure about availability as well. Since I enjoy the smooth function, good looks, and low weight of this XTR lever, I decided it is worthwhile to attempt to rebuild it with new seals. How would I do that?

This answer must be prefaced with the obvious: brake-related work is high-consequence and could be genuinely injurious if performed incorrectly. Please exercise your own judgement regarding your repair skill level and the risk of the job in question. Read the procedure in full before beginning any work. This answer is merely a guide; in no way am I liable for the outcome of how you use the information presented.

Here are some photos for reference: 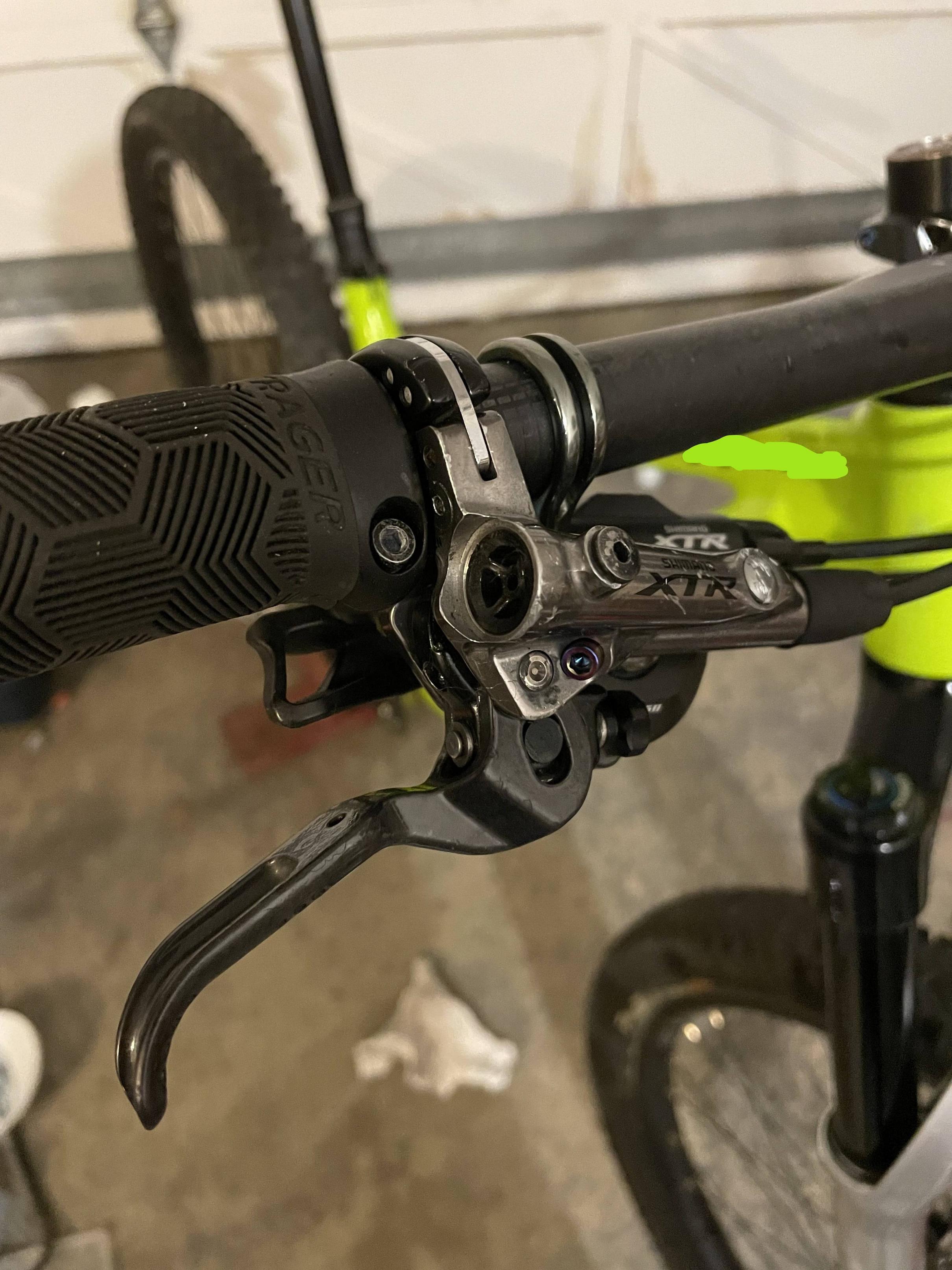 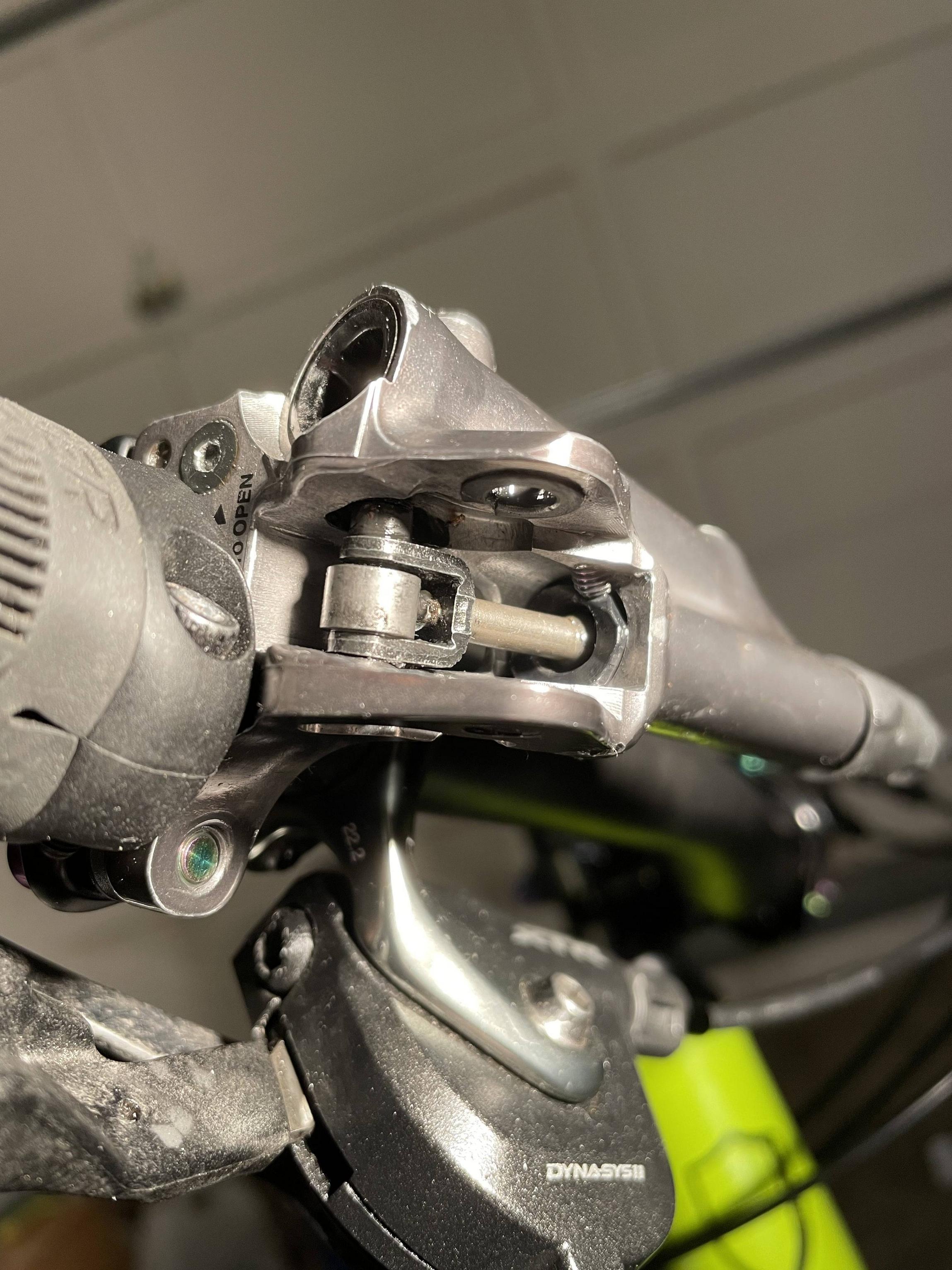 Some of these items are optional. I sincerely hope I don’t need to tell you when to use what tool if you’re considering performing this repair.

Step 1: On this part of the lever blade, there is a hole. Inside this hole, you will find a rubber plug. Pick the plug out and then loosen the set screw behind that using a 2mm hex wrench. 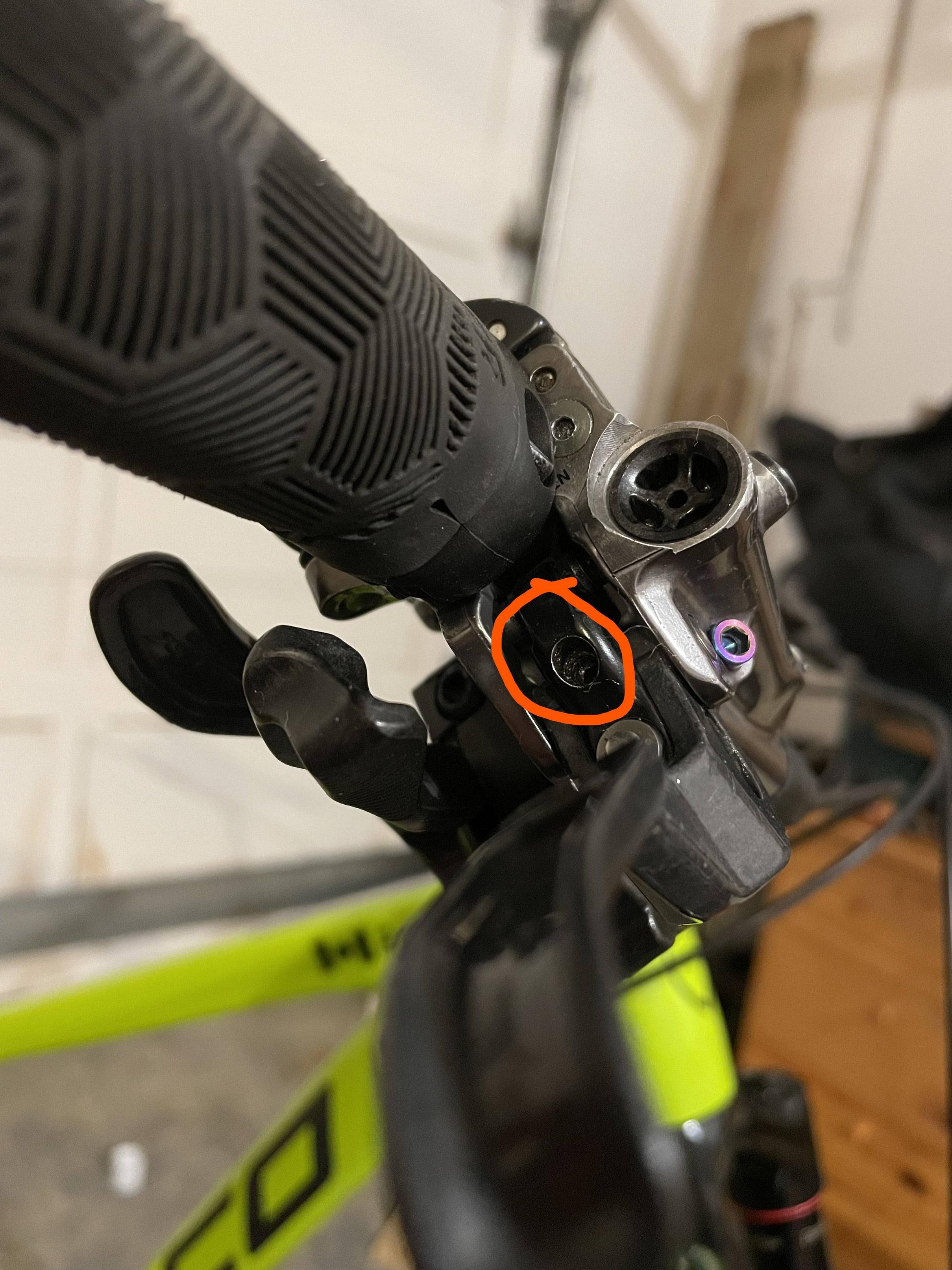 Step 2: Use a 4mm hex wrench to press the pivot pin out from the bottom (you will remove it from the top side). Be careful not to damage the bushings the pin rotates on. Remove the lever blade, being sure to not lose any of the springs. Remove the freestroke adjustment screw. 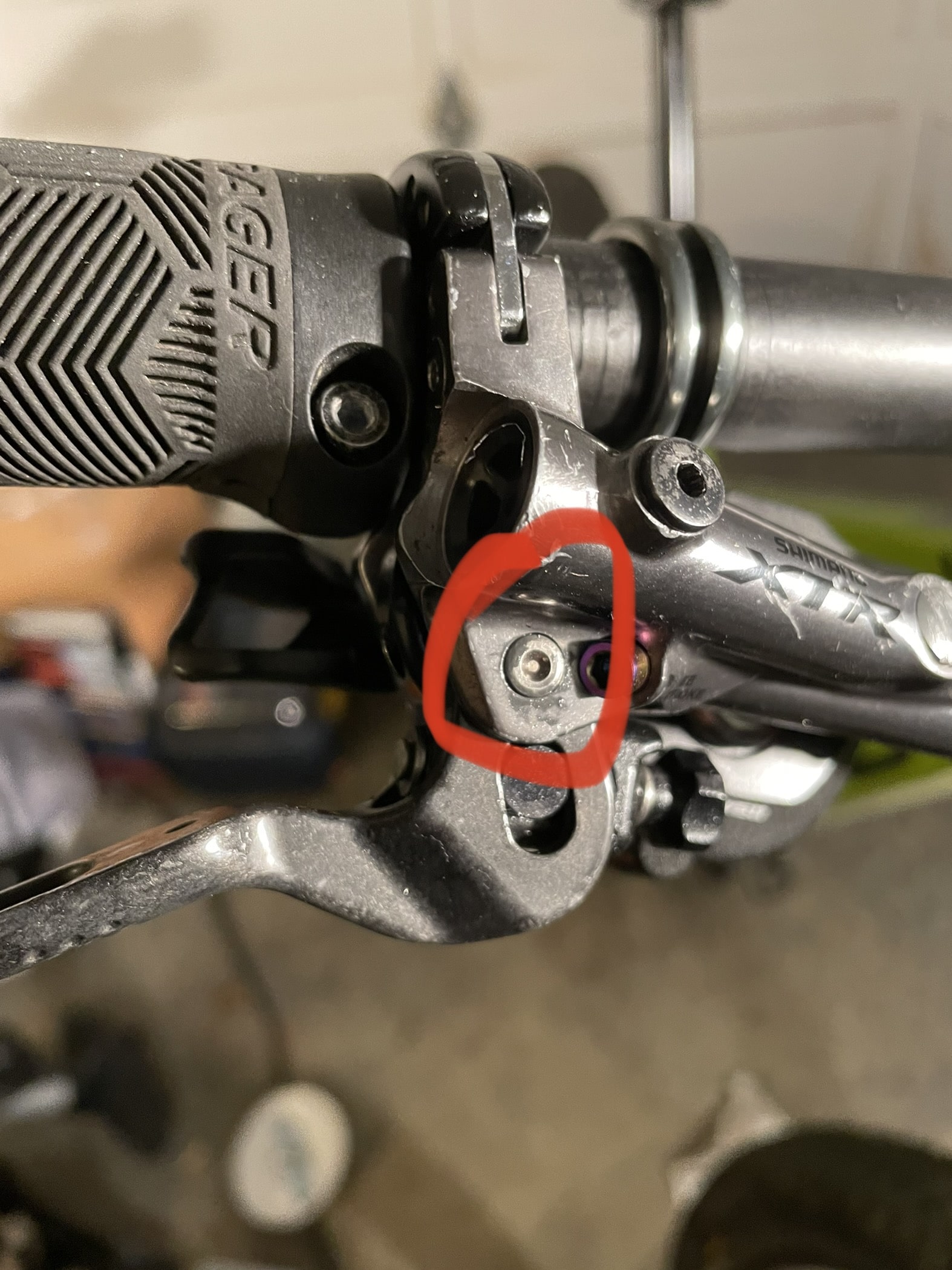 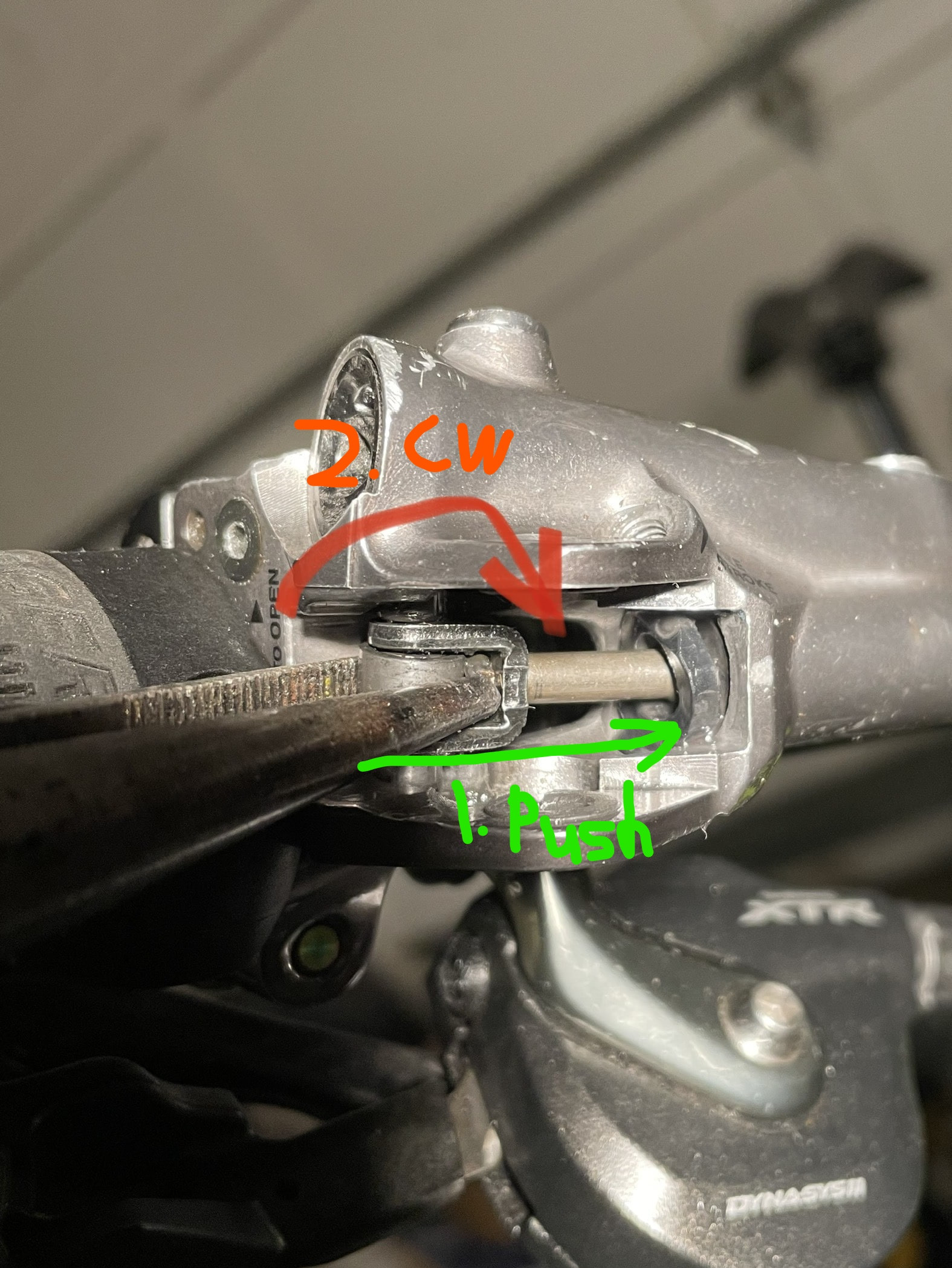 Step 4: Clean the inside of the brake lever with the cotton swabs. Avoid excessive use of alcohol at this point to avoid any possibility of contaminating the oil. Remove all dirt and grime so it does not get pushed into the master cylinder. 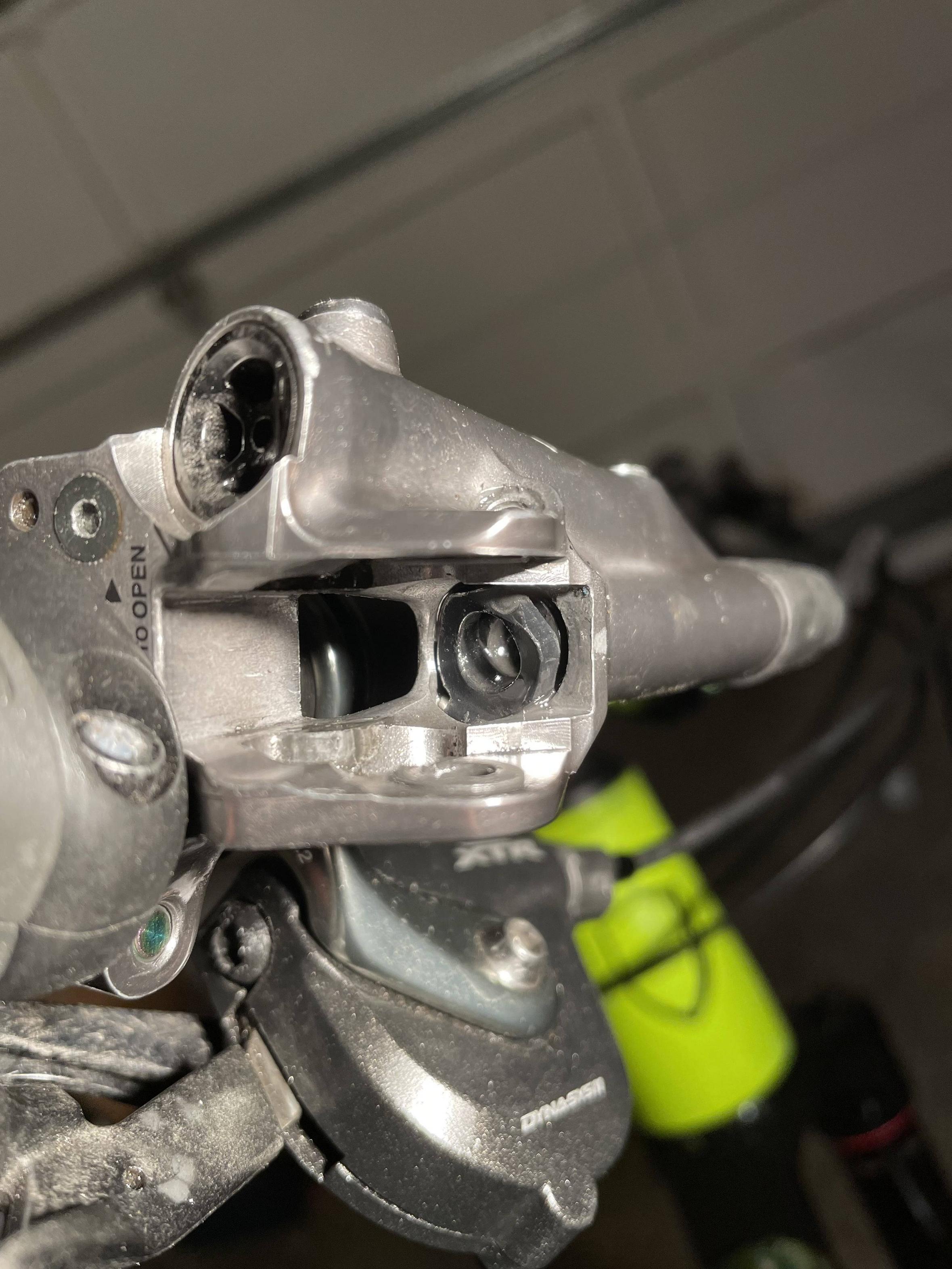 Step 5: On the backside of the lever body, there will be this small hole. Using a large nail/screw/punch to deliver the first hit and then smaller nails after that, hammer the pin inside this hole out. Make sure you use nails small enough to fit inside the hole as to avoid expanding it. Do not be tempted to press it out from the other end, as the raised ribs on that end of the pin will damage the hole. I improvised a tool by grabbing a large nail with the locking pliers, allowing me to hit the small nail sticking out of the hole.

This is an especially tricky step. You must be slow and methodical, but still hit it hard enough to actually move the pin.

Once the raised ribs have escaped from the lever body, the pin may be pulled out with pliers. 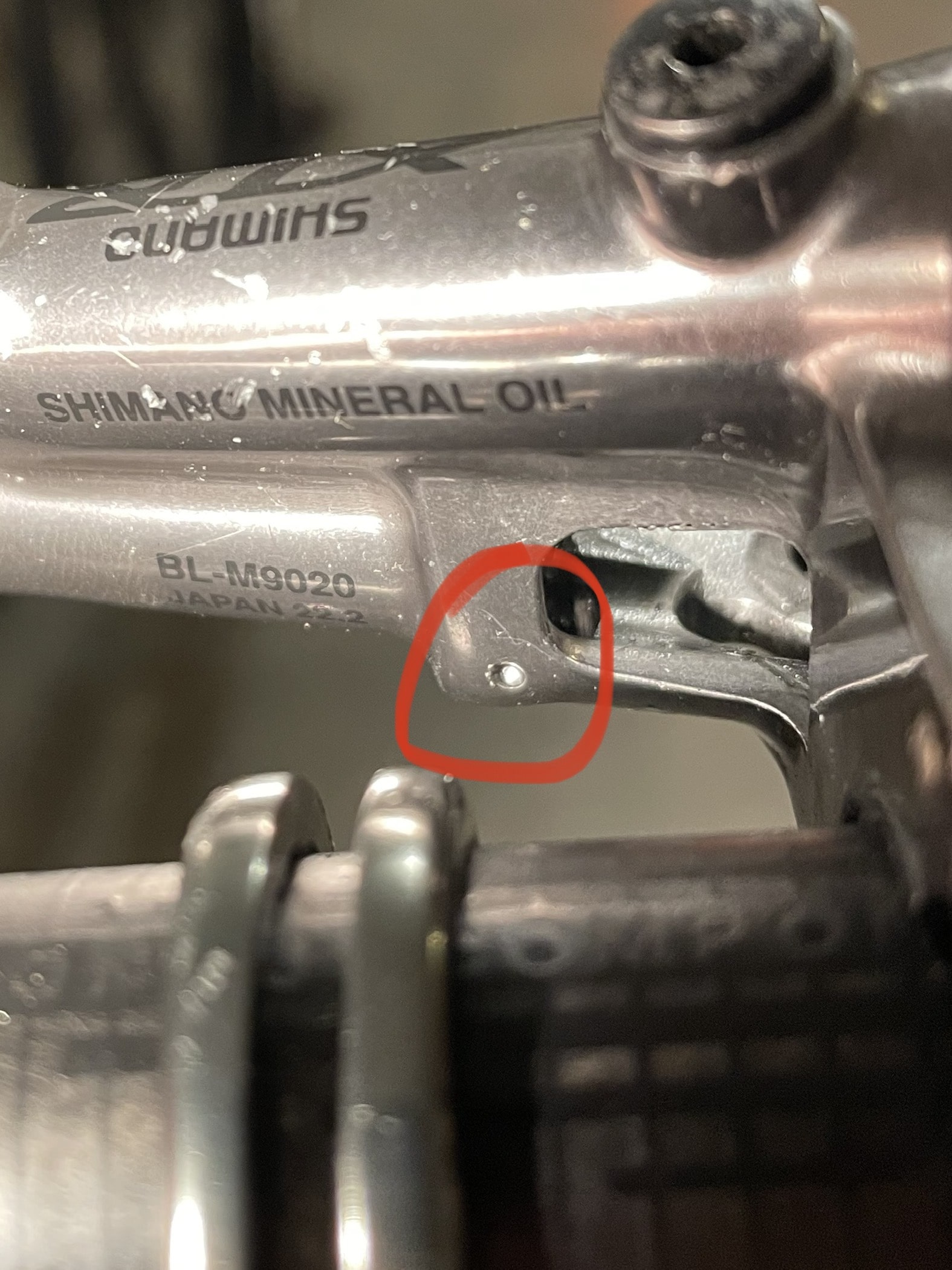 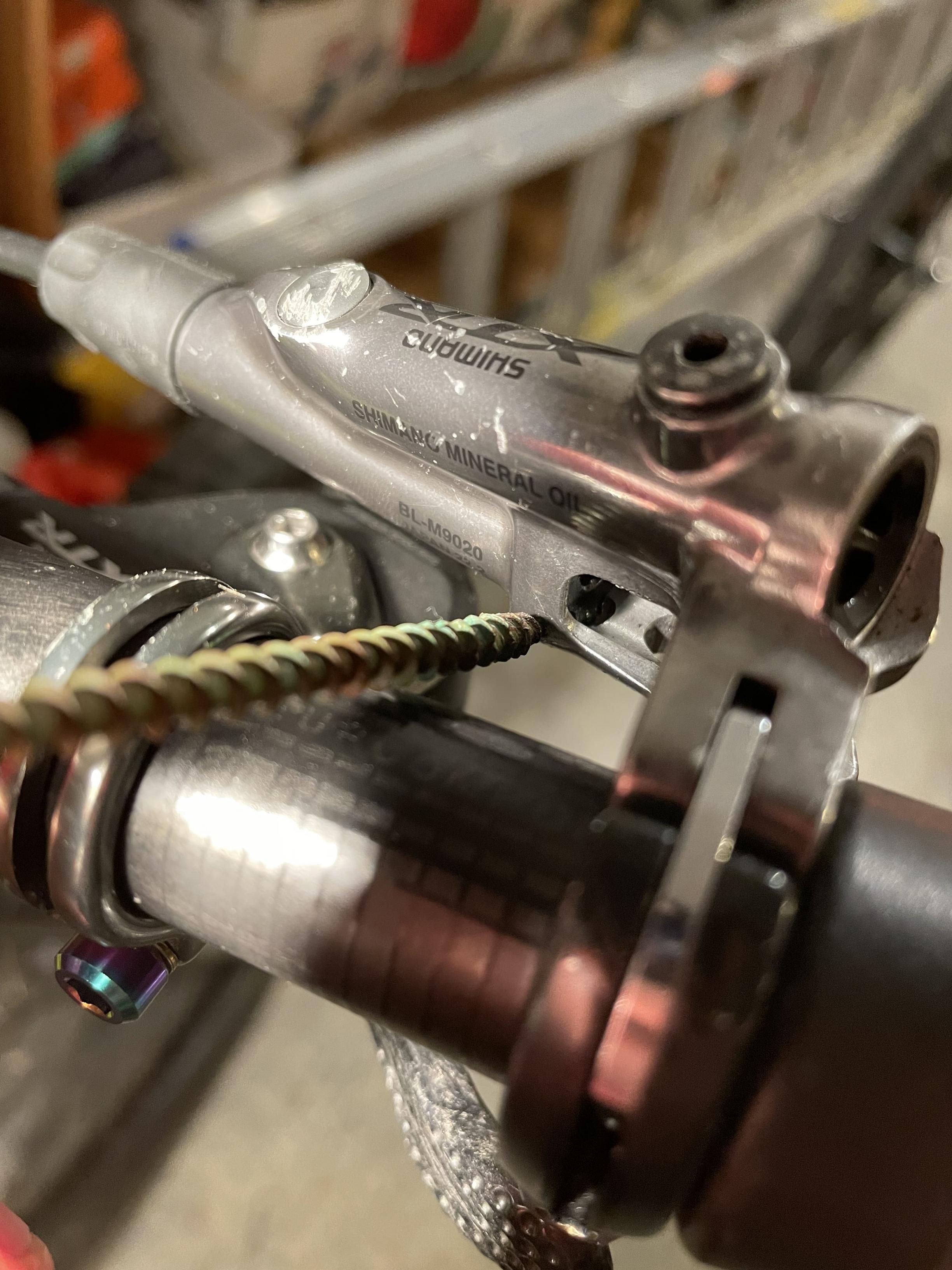 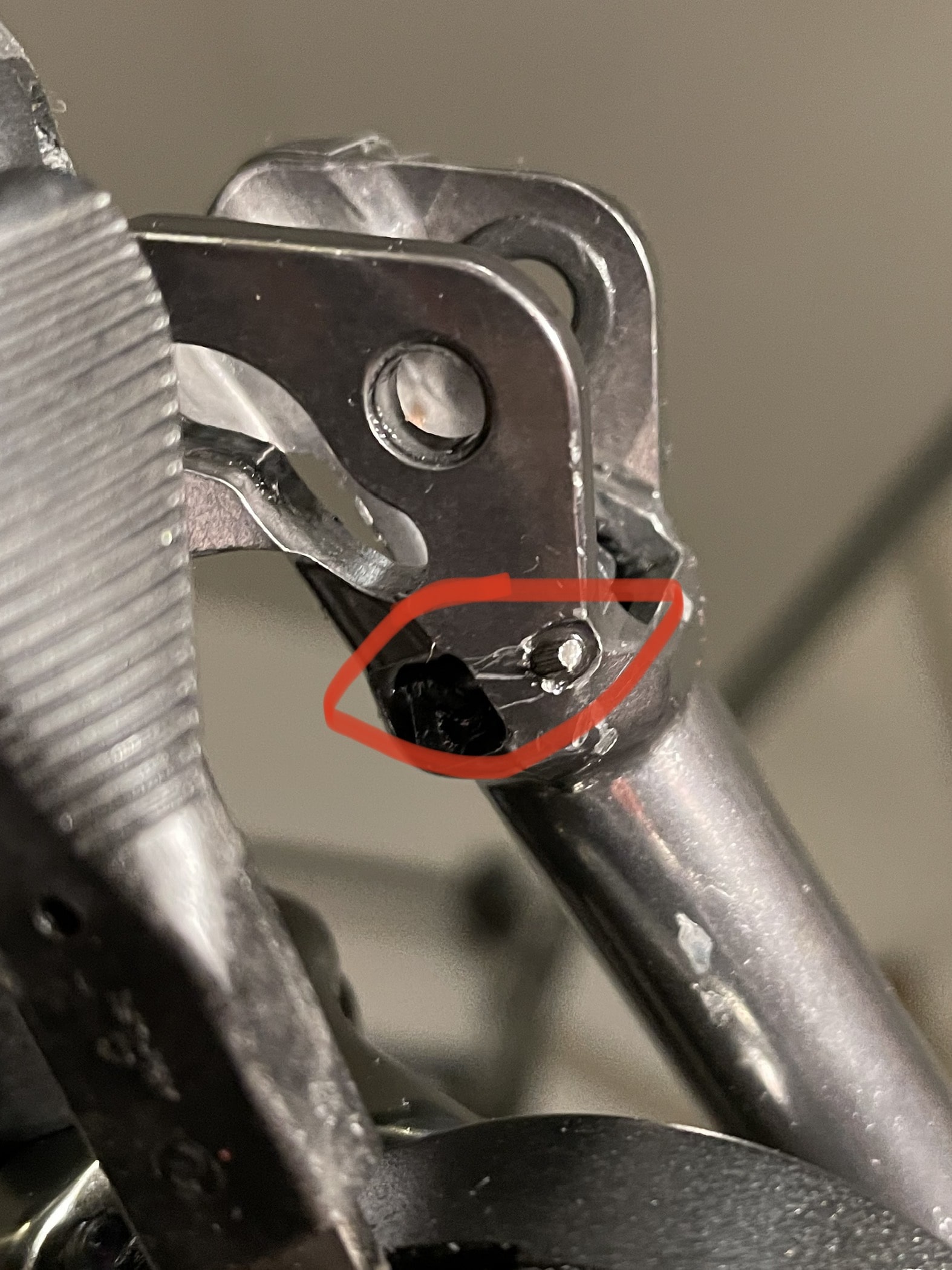 Step 6: Press the piston in and simultaneously use pliers or tweezers to remove the black plastic piston retaining ring. This is another finicky step and may require several tries. Afterwards, attach a bleed cup to open the brake reservoir (a pressure differential is generated when the piston is inserted/removed, which could damage the compensation bladder). Situate a catch basin under the bike as oil will flow out. Remove the piston. 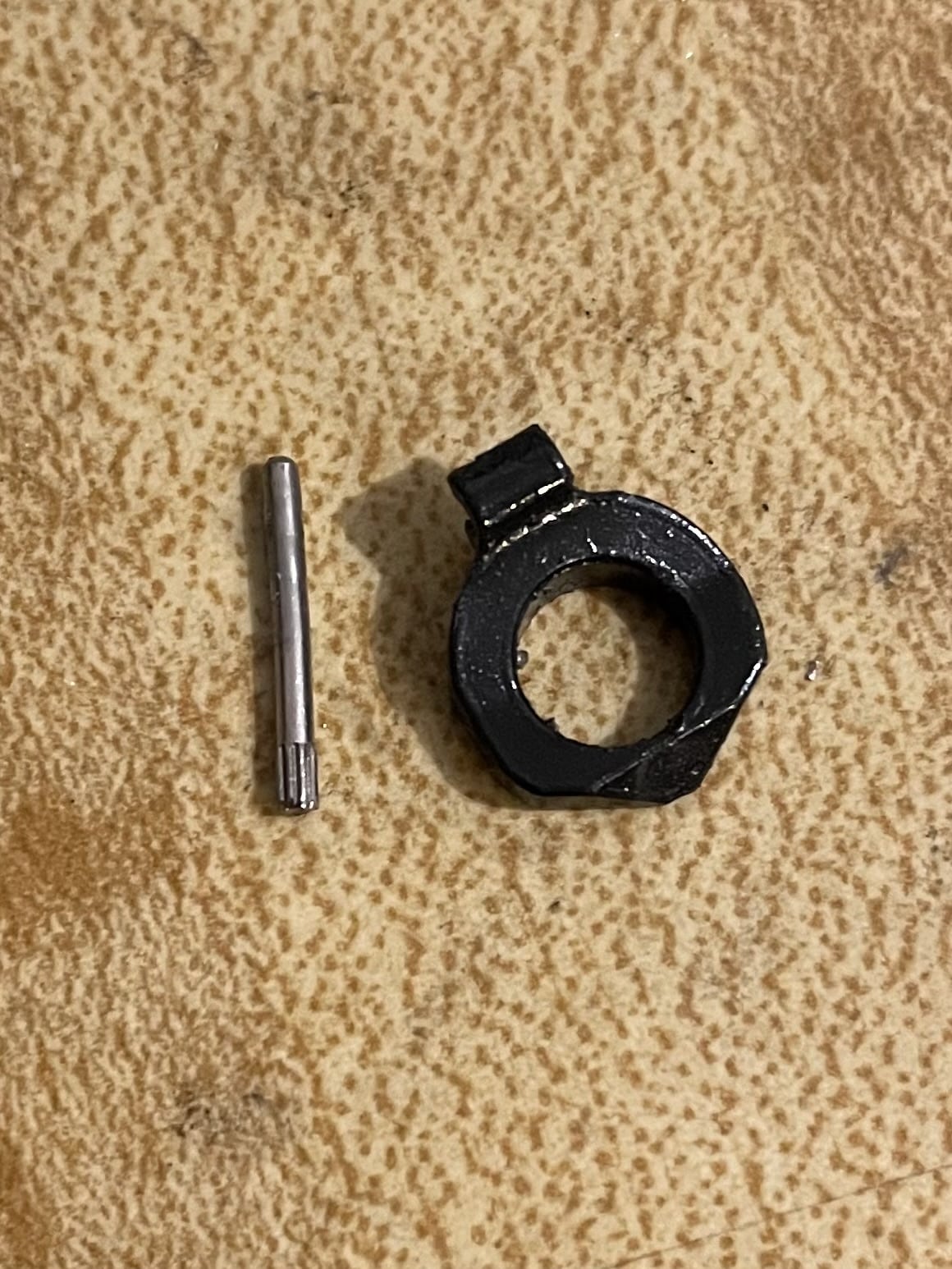 Step 7: Install the new seals and/or piston. Halfway done! Take a break now. You don't want to mess up the assembly phase. 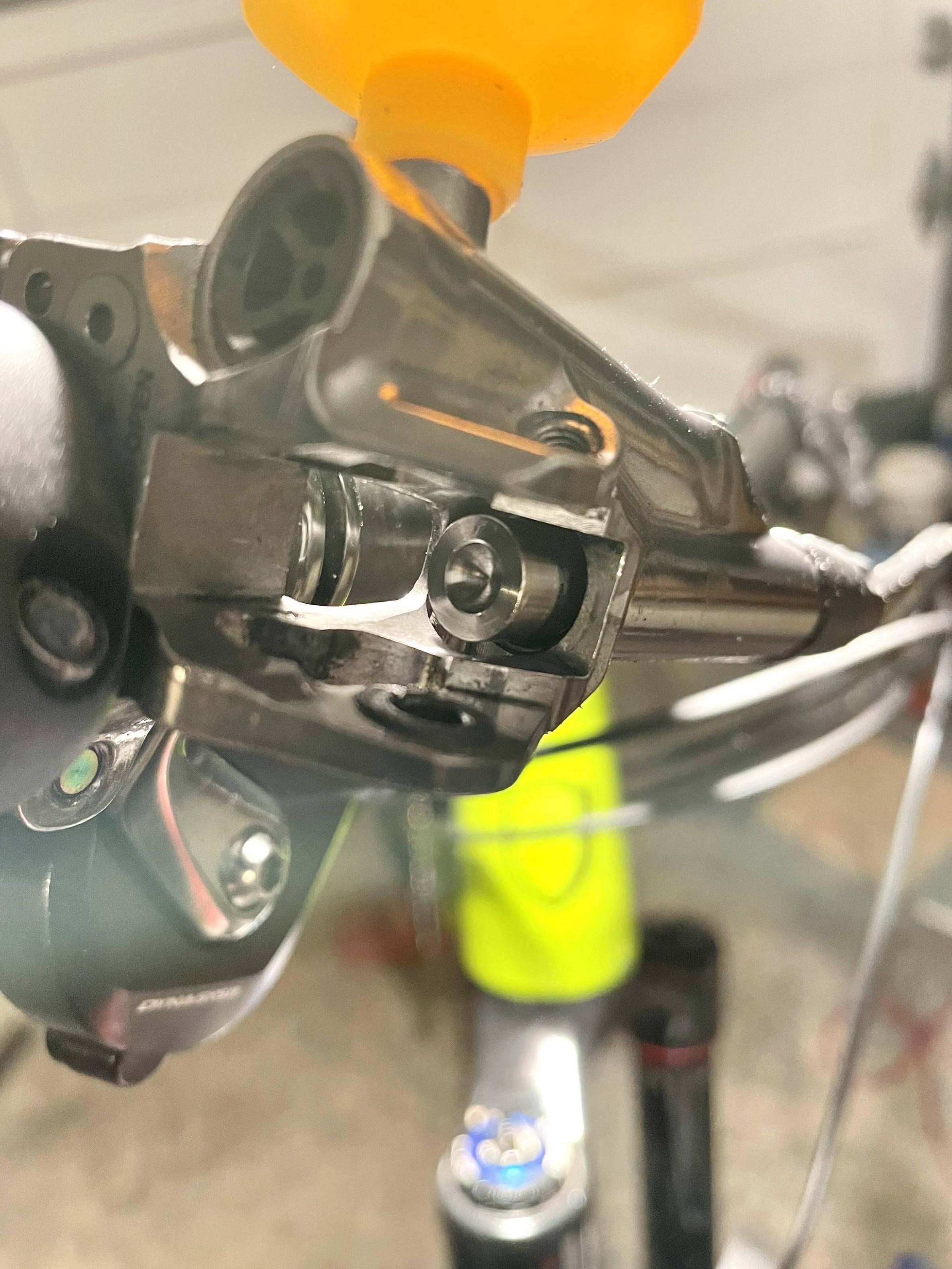 This is largely the same as the disassembly, but obviously in reverse.

Step 1: Press in the piston with a hex wrench or something. While keeping it pressed, maneuver the black plastic retainer into position. Make sure to get the orientation correct: the tab should go into the cutout where the pin drives through, and the bevel that the freestroke screw presses on should be facing away from the piston.

As expected, this is a finicky step. It took me a good 15 tries for the first lever and like 10 for the second. It’s really hard to keep the piston pressed in with a tool while still leaving space to insert the retainer. Patience is key; go take a break if you start getting aggravated. Be careful not to scratch the piston bore with your tools while the piston is pressed in. 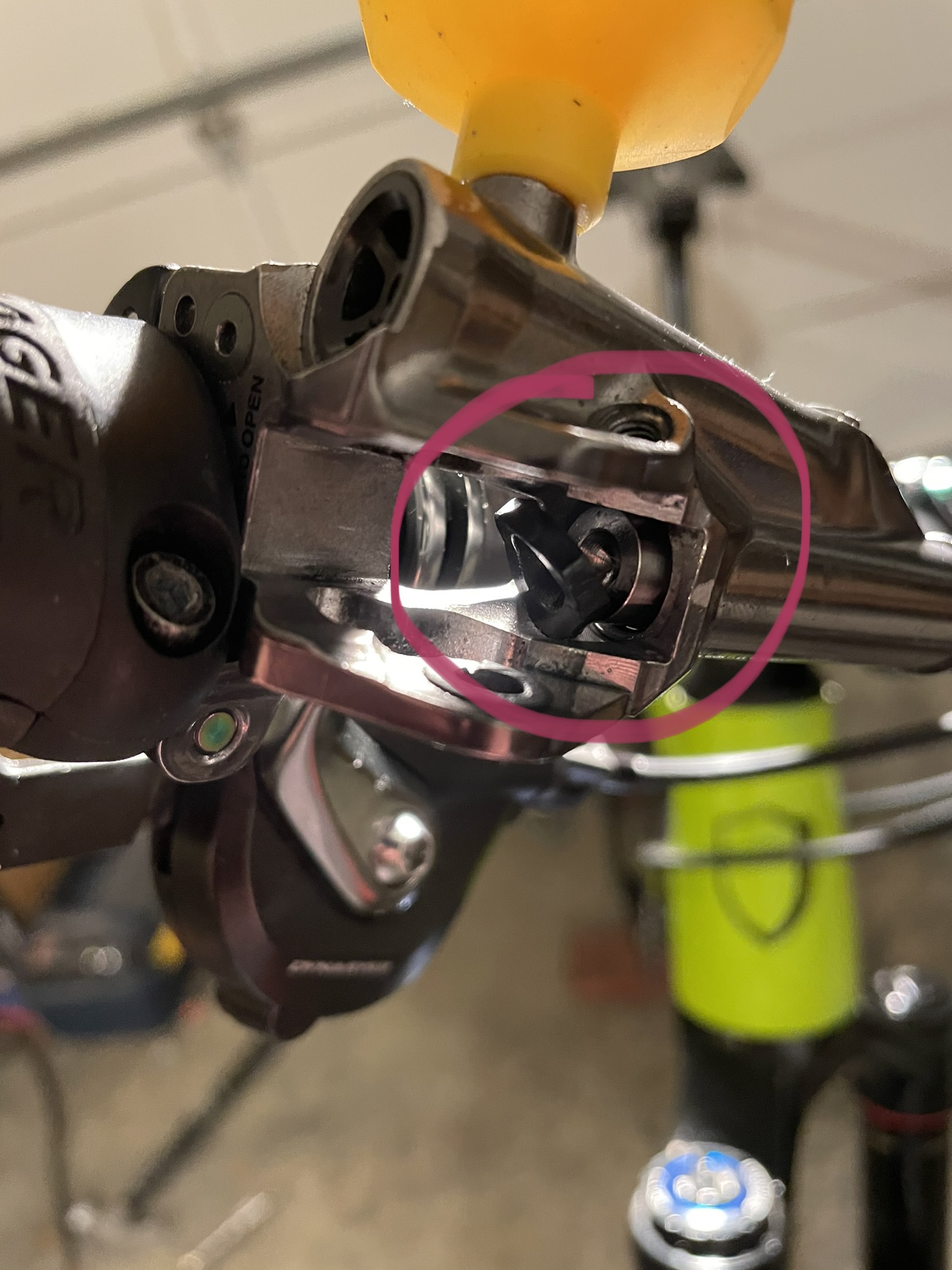 Step 2: Reinstall the little pin. It’s easier than removal because you don’t need to use tiny nails to drive it beneath the surface (you’re finished once it’s flush), and the front side of the brake lever is much easier to access than the back side. I again used the “deck screw clamped in locking pliers” tool here, but a proper punch would have worked better. The pin will insert smooth end first from the front side of the lever. DO NOT hammer the raised ridges through both sides, you’ll damage the lever body. 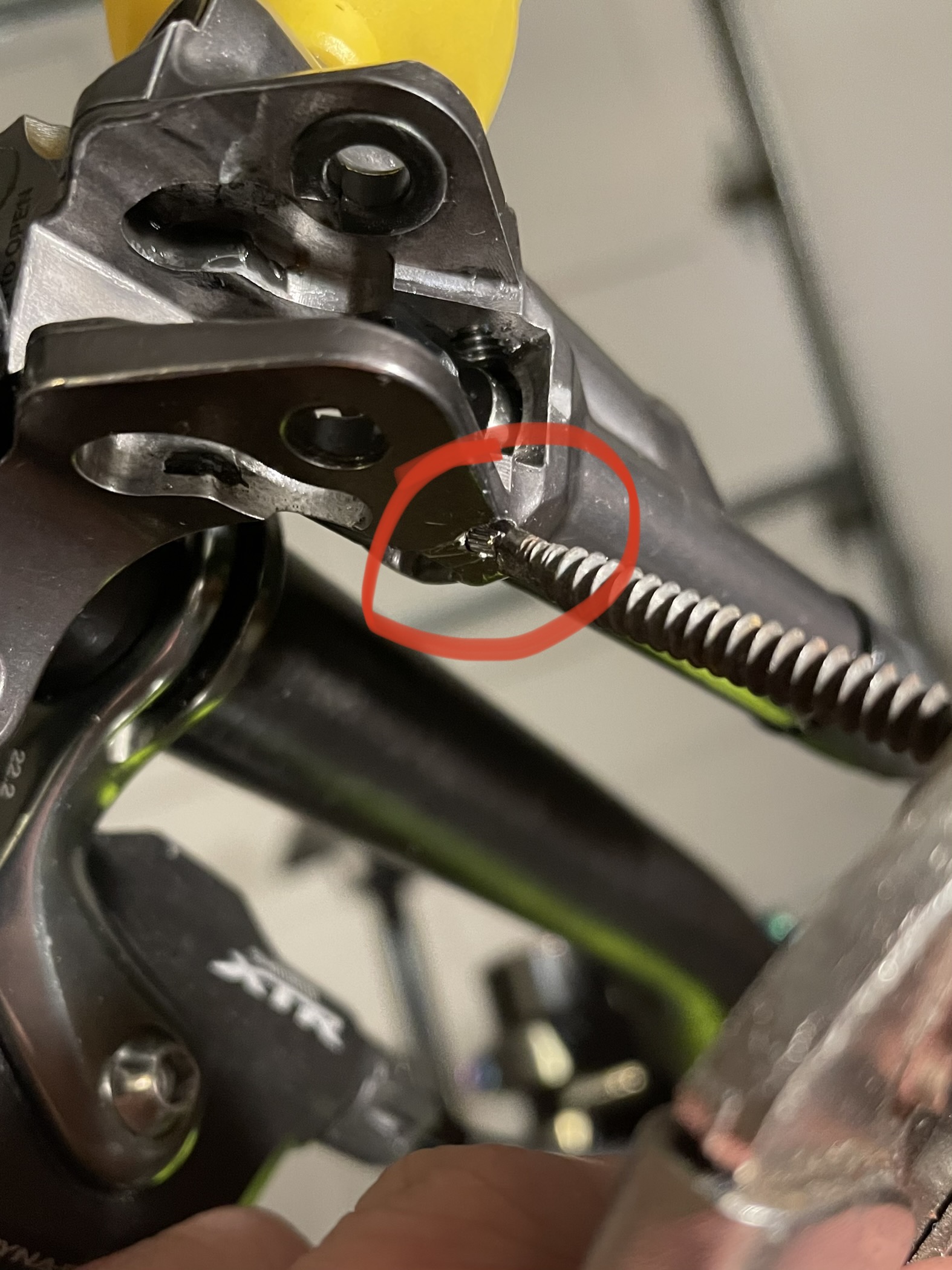 Step 3: Reinstall the push rod assembly. Put a dab of grease on the ball-and-socket joint between the push rod and piston. Lubricate the main roller and two guide rollers with either heavy oil or a grease. You will rotate the push rod assembly counter-clockwise during reinstallation, which will let the lower guide slip in first before the upper one does. Again, use your fingers here if possible. I used pliers and unfortunately left marks on the roller’s surface (no gouges or anything thankfully). 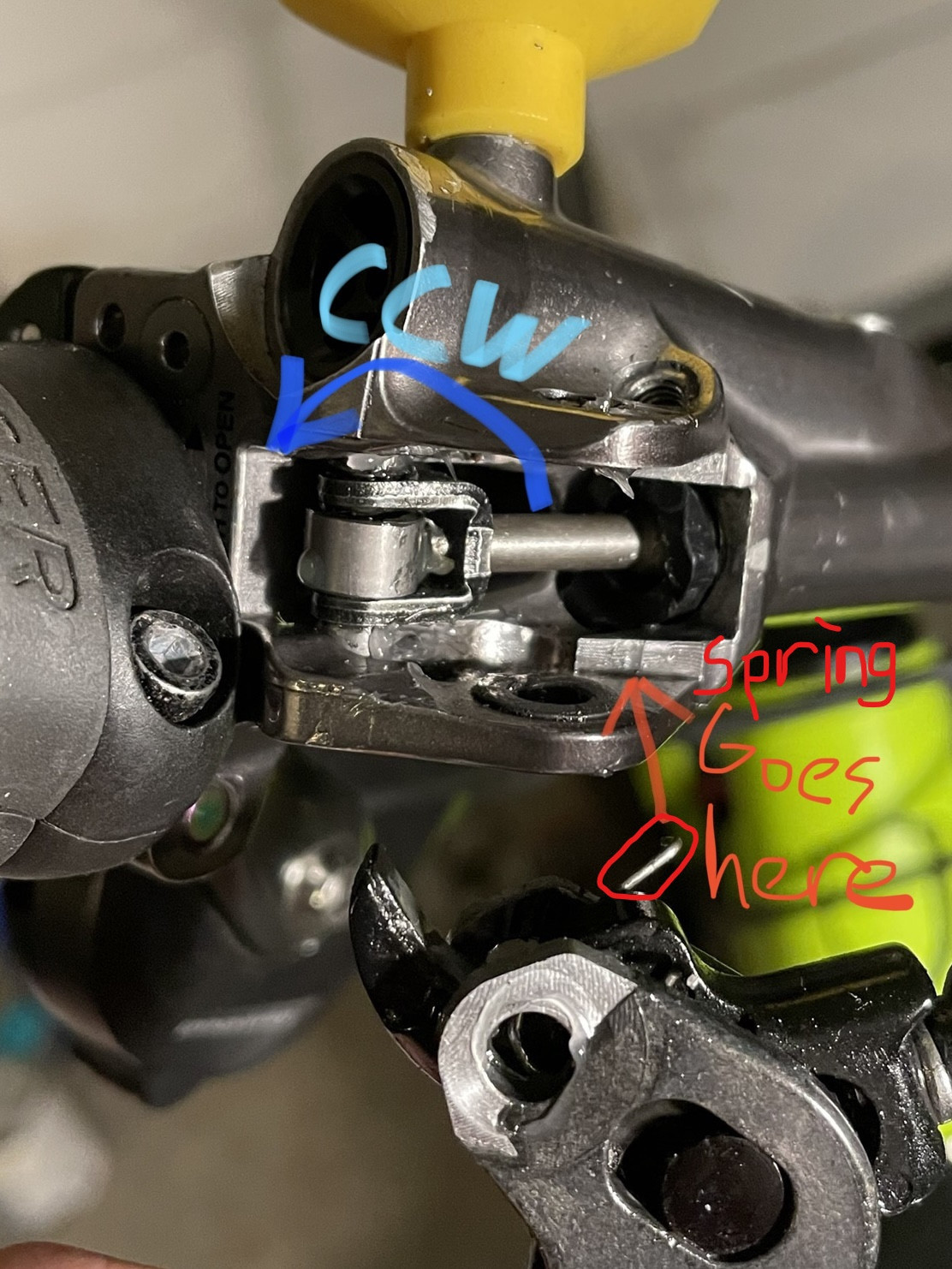 Step 4: Reinstall the lever blade. Refer to the image above for the location of the spring’s arm. Grease the push rod assembly slots, the lever blade bushings, the pivot pin, and any other moving interfaces before assembly. The pin will push in from the top. Ensure all parts are aligned correctly before pushing the pin in. It can take some decent force to go all the way through, and you don’t want to break anything. Check that the spring has been correctly installed by pushing the lever blade away from the handlebar. It should return to its resting position under spring tension. 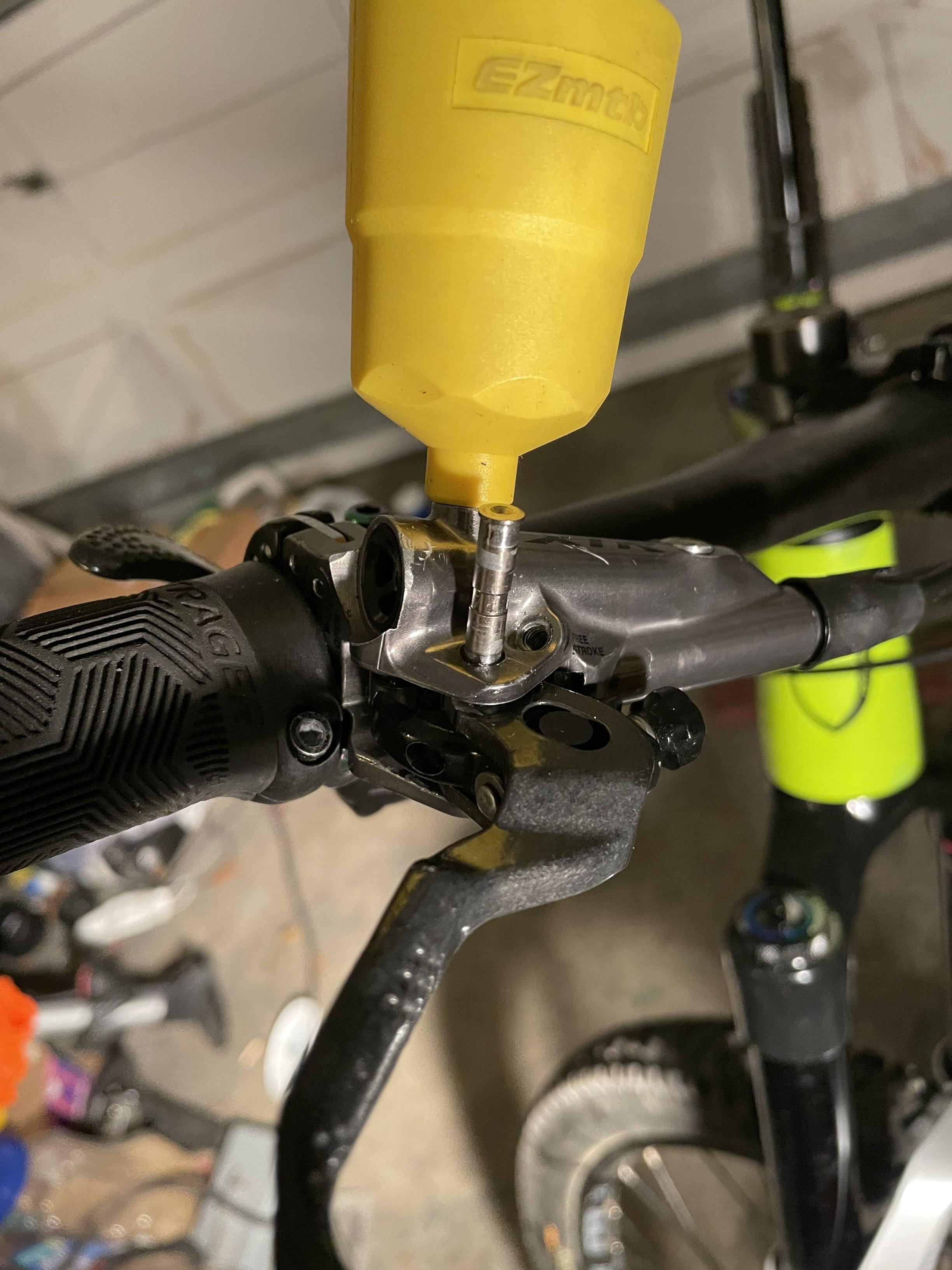 Step 5: Ensure the pin is pushed all the way down, and then fasten the retention set screw. You may want to add threadlocker to the set screw before that. Install the rubber plug in the set screw hole.

Step 6: Reinstall the free stroke screw, bleed the brake, clean up any spilled oil, and give the brake a pressure test by squeezing it really hard. If there are no leaks, you’re done! Nice work.

I went on AliExpress to purchase these titanium pistons, which came with new seals. You could replace just the seals on the factory piston, but why not add a little [invisible] bling while I'm in there anyways?

If you don't trust those, you could disassemble a cheaper lever to harvest its piston. They should be the same size for all levers since virtually all Shimano brake components are inter-compatible.

Not the answer you're looking for? Browse other questions tagged shimano brakes repair hydraulic-disc-brake or ask your own question.