I always see professional bike builds have crimped ends on the cables. I've never been able to find any tools or ends to do that, so I just wrap the ends in electrical tape to keep them from fraying. I'd like to up my game and actually do it the right way but am failing at finding the correct tools and parts. What should I be searching for, and are there different sizes that I need to be aware of? All the cables on my current bikes seem to be the same size, but that's a relatively small sample size out of all the bikes (and cables) in the world!

They have a couple different names: cable tips and endcaps are common.

They come in two major sizes, one for 1.1 and 1.2mm shift cables and one for 1.6mm brake cable. In practice either of those two sizes can go on either cable type. Brake ones don't usually look very neat on shift cables. Some mechanics favor using the plain shift ones for everything, which is fine - they slide on kind of tight on brake cables, but (subjectively) look neat. When you see them for sale not specified shift or brake, it's usually kind of an in-betweener size, but I've also gotten bottles like that which were kind of too big to look good on shift.

In the days of "oversize" mountain bike brake cables, there were cable tips just for those. I believe they were borrowed wholesale from motorcycle applications.

To do the actual crimping, for many years I would just use light pressure on a blunt or low-quality cutter on a needlenose plier, i.e. keep a junky one around just for the purpose. As mentioned in comments, wire strippers also have a crimping part that can work. For a few years now I've been using the Park needlenose pliers that have a very effective crimper built in and are also good enough quality on their cutter to trim cables, so it's the fewest hand motions and slickest way of doing it that I know of.

Soldering the tips is a professional-level way of doing it as well. It's strictly better in a functional sense, but isn't done commonly anymore (that I've seen) because it takes longer. There have been times and places where it was the norm. Some people favor soldering and then capping the tips, but others argue for soldering and then leaving them bare because that approach maximizes their ability to be take out of their housings and put back through if needed. (Which it almost never is, but whatever). If you have soldering supplies but not tips, there's nothing wrong with doing it that way. When it's properly done it also eliminates any risk of getting poked a strand.

The ends are called crimps or ends. They are available in small handfuls for almost nothing to free at a LBS, or a virtual lifetime supply in a bottle for about $10. If you can't find them online, search for ferrules, which are the counterpart for cable housing. They'll all be categorized together, and ends should be nearby. 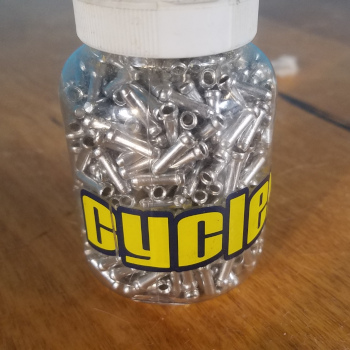 While you can use any study pliers to do the job, the Park CN-10 cable cutter has a crimper slot that's just the right size, specifically for the task. 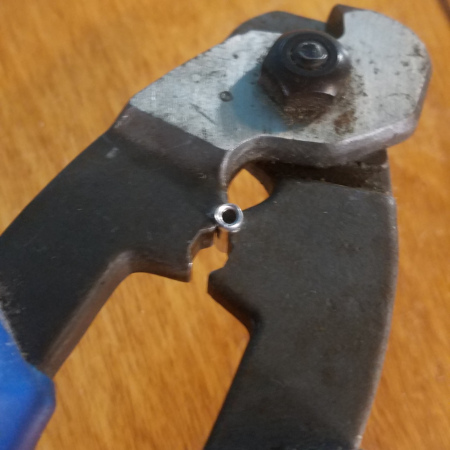 Crimps are ideal, but there are three other good possible solutions, and a bad one.

The most terrible option is to get the bike set up right, and then cut the flyaway end flush with the edge of the brake. This leaves you with a cable that can never be adjusted or reinstalled. However it is the most aero.
Opposite is to leave the entire length flapping in the breeze, risking it getting caught in the wheel or works in the brake/chain/derailleur.

8
What is a good replacement for a cable end cap?
20
Why does cable routing utilize alternation of sections of shielded and unshielded cable?
3
How do you make an end-capped gear cable?
0
Brake cable shaking at the end of the brake caliper
1
Options for fully lined bulk cable housing
3
Brake cable end anchor, which metal?
7
How to retrieve broken off end of gear cable from inside Shimano 105, 11 gear, lever?
7
Shifter cable types for Gripshift
5
Shifter cable ruptured near the inner end in ST-R7020 - usual defect?