2020 Ultegra rear shifter doesn't shift (or indeed even move the cable); cable still tight and derailleur can move by hand

On a ride today, on a gear change, the chain dropped on the front crank. After putting it back on, the rear shifter no longer shifts up or down. The rear derailleur is on the second smallest cog.

It is a 2020 Giant TCR Advanced Pro Team Disc bike which I bought second hand. I am in Australia.

Any ideas? Is my shifter gone and in need of replacing? Is it likely to be under warranty? Will they honour any warranty if I am the second owner and have no receipt? 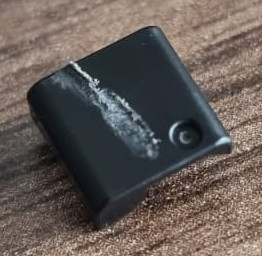 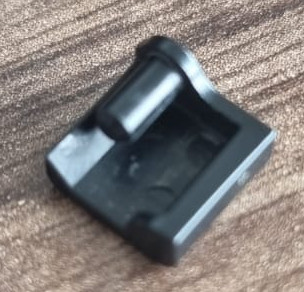 Edit: I've taken off the bottom panel (which was loose i.e. the screw wasn't at all tight and the cover was flapping a little) and this is what I see inside. It looks like the cable has fallen out of the stay/holder so the levers aren't pulling the cable.

Applying a little pressure on the where I think the cable should hook in, the up and down shift buttons seem to click normally and the pawl moves up and down.

Could it be as simple as just reseating the cable? How would I get slack into the cable to feed it back up? And what to do with the bit that fell off?

[This diagram helped me. The bit that fell out looks very much like piece number 2: https://dassets.shimano.com/content/dam/global/cg1SHICCycling/final/ev/ev/EV-ST-R8020-4245D.pdf] 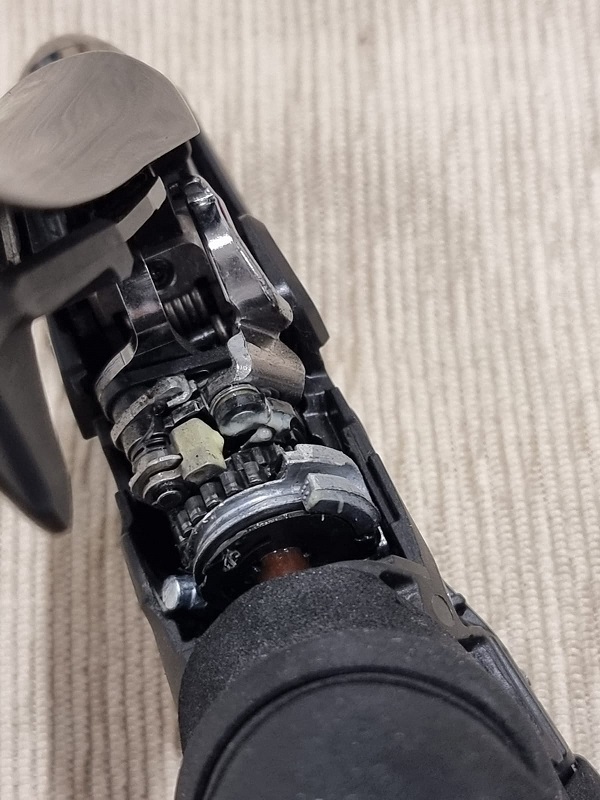 EDIT - hopefully final - found the spot for the missing piece - it's the bumper for the shifter button. Pic with the cable seated and the piece reinserted. Just had a little spin on the trainer and it works perfectly and in fact shifts a little tighter since I had to recalibrate the rear derailleur after reconnecting! 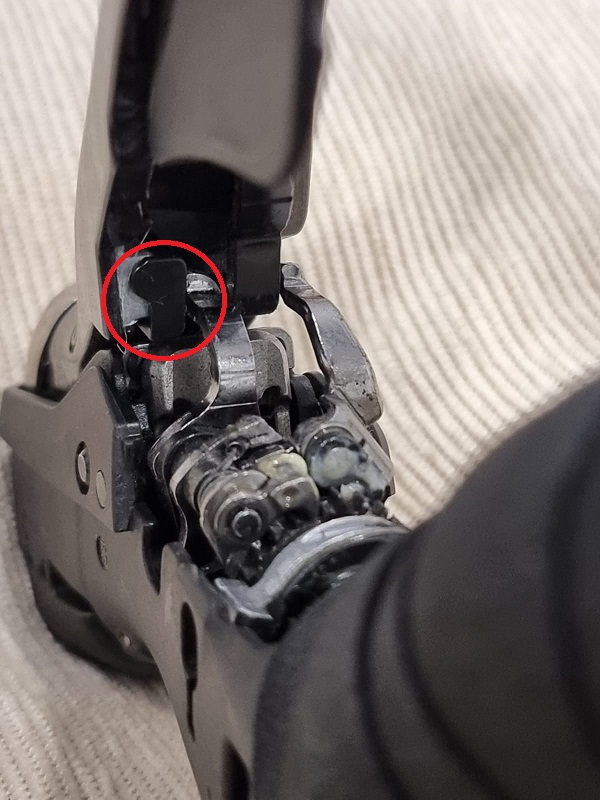 If you have done some decent miles on the bike, there is a good chance the cable has frayed or broken within the shifter body. The symptoms are not normally as you describe but it is worth checking as it's such a common problem. With the hood peeled back or removed and the little plastic cover removed, you get a good view of what's going on. A frayed cable expands and so can get stuck like this. The damaged plastic parts are a little mysterious.

If you go to a bike shop with whom you are friendly, they can send the shifter off to the Shimano distributor for warrantly. It's not a quick process but they are unlikely to deny you service as it's clearly within the Shimano warranty period of ...3 years? ... but they can take a couple of weeks to determine who is at fault and any visible external damage is enough for you to be denied a warranty replacement. The proof of purchase is a misnomer -- it isn't required by law and bike shops are sending warranty parts back frequently even sometimes on new bikes that have never been sold.

If you aren't on good terms with a Shimano-dealing bike shop you may struggle to get an efficient (or any) response another way. It's an expensive part and you should make every effort not to pay the full price for a new one, as you don't imply you have damaged it through cack-handedness.

From your excellent description it sounds like the shifter is missing some critical part, probably a pawl in the ratchetting system.

I would have expected it to drop into the smallest cog. Not sure why its on the second, unless the incident has slightly stretched the cable or the internal socket that holds the cable end.

Given that its not working now, you're probably best to remove the shifter from the bars, and start tearing it down.

If you must ride, it would be best to fit a temporary shifter/brake lever, or ride another bike.

Do please take photos as you go, and post them here.

As for warranty, I would not get your hopes up. As you say without the sales receipt you have no evidence. I don't know what the minimum statutory warranty is in Australia, but if its 12 months then that'll likely apply to all the components, excluding wear items like tyres/brakes. The only thing on a bike that might have a good long warranty is the frame.

However you could try contacting the previous owner, and see if they have paperwork still.

Do a quick web search on the exact part number, and see what a replacement would cost. Contrast a new Right shifter, with a new pair, optionally selling your good left shifter. Also look at Microshift, or stepping to shimano 105 groupset shifters for the cost. Check out gumtree and ebay and so on; a used shifter might save a lot of cash.

Not the answer you're looking for? Browse other questions tagged shimano shifter or ask your own question.

4
How can I adjust index shifter so it doesn't skip the second chainring?
2
problem in gear shifting
1
Front derailleur cable tension too high with Acera shifter and Ultegra derailleur
1
What could be preventing my bicycle from shifting gears?
2
Is my rear shifter broken? Ultegra 6800 shifter, 11 speeds, 9 clicks, only 8 causing cable tension change
1
Why can't my rear shifter shift into low gears?
3
Shift lever tight when cable clamped in derailleur, adjustments seem futile
5
Shifter cable cut deep groove into the rear derailleur casing
3
I wanted to adjust the rear derailleur and loosened the cable to begin. The twister shifter was working before loosening, now it isn't
5
How do I adjust a Shimano RD-M6000 properly?