Why do they not sell bicycles with four wheels?

In the summertime, and Fall/Autumn, and Spring, my normal, two-wheeled bicycle works perfectly well.

But then there's Winter. What is normally friendly, non-slippery asphalt and grainy forest paths suddenly have turned into slippery death traps. Any route I pick is now like a lethal obstacle course where I put my life on the line. One mistake and CRACK! There goes my skull. Or rib. Or any part of my body. While typing this, I have just come back from one such terrifying bicycle trip, and it was anything but enjoyable. Scared to death almost every single meter, I was forced to move extremely slowly, sometimes even walking with the bicycle by the side, constantly on guard and ready to engage "operation save my own life and body parts when the whole thing just falls to the side".

Even when they have "sanded" the roads, many places look basically like a pure-ice slope down to Icy Hell. I've had "near-death" encounters like this many times in the past, and I never forget how scary it feels, so I'm very much trying to avoid it happening again.

I can't help but think how great it would be if, instead of one wheel in the middle in the front and in the back, it had two wheels, to the left and right, both in the front and in the back. Spaced apart quite a bit. This, at least according to my understanding of physics, would almost make it impossible for it to turn over while I'm riding it, no matter how slippery and hostile the surface is.

It would also have the added benefit of making it much more doable to have somebody ride in the back in non-winter time, because the weight is distributed better and the two wheels provide enough support for another person, or higher load (such as lots of groceries).

I know that there are those "fatwheel" (I think it's called? Fatbike?) bicycles now, but that doesn't help in this scenario. It doesn't matter how thick the wheels are -- they have to be two ones that are placed apart, no?

Short of some amateur-built "crazy inventor" contraption, I've never seen a four-wheel bicycle in the wild or for sale anywhere. Why is this? Why not enable me to move around in the winter? Is there a good reason for why this is not done that I have not considered? And it's not like it would not work in the summer as well, so you wouldn't need two different bicycles. And if one wheel is punctured, maybe it could offer a way to continue on home with just the three other ones. I see only benefits, myself.

Why do they not sell bicycles with four wheels?

They do sell vehicles with four bicycle wheels.

Google "quadricycle bikes" and you can find a variety of small companies that make them.
Here is one example:
VierBike Sport Standard 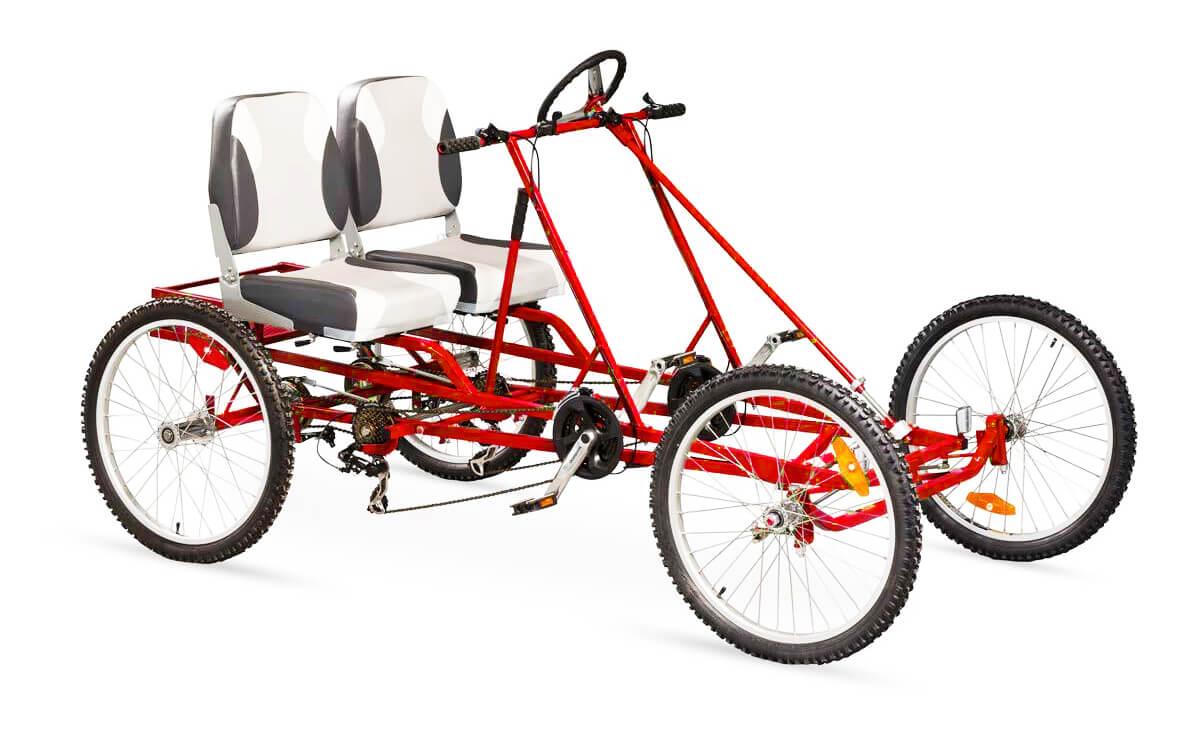 This reference is intended only as one example. I have no idea how good this product is.

There are several market related reasons products like this are not more popular.
The bottom line is that there are not more of them because there is limited demand.

Trikes, particularly recumbent trikes, are relatively common and provide the kind of stability you're talking about--although they (and quads) are prone to flip in turns if you don't know how to corner. My impression is that whatever marginal advantage a quad might have over a trike is not worth the disadvantages.

Riding a trike or quad on a flat tire would not be viable.

Trikes and quads are considerably more complex, heavier, more expensive, and harder to manage when you're not riding them. Rolling resistance, mechanical resistance, and aerodynamics are all poorer, so you will go slower, or work harder to go the same speed.

I have owned recumbent trikes. They're a lot of fun, but they do have their drawbacks.

The main downside to a quad wheel is keeping all wheels on the ground.

The surfaces we ride on are not flat, so there's always a situation where one wheel would be off the ground or at least lower ground-pressure.

If the bike has one powered wheel, then it can get hung up with the powered wheel off the ground. This can be reduced by adding a locking differential or a live axle. Both add weight, and the axle will cause tyre scrubbing in turns because both rear wheels are locked together.

So you need to carry a lot more weight in terms of frame material and extra components, and suffer twice the rolling resistance. Quads are very much not aero either because of all the extra mass.

The places where Quads work well is when you have additional wattage, from a motor, and/or perhaps you're carrying so much mass that the additional bike weight is required.

I've seen a quad bike used to hold a solar panel/roof which worked for an expedition bike.

In your case, there's either modifying your bike as a winter ride, or realising that the colder places like Canada and Scotland and Finland have distinct riding seasons. It is okay to not-ride in winter.

You might look at options like studded tyres (for ice) or winter tyres (ice and snow.)
Fatbikes are acceptable at floating "over" snow but generally that means an additional bike, and they're no better on ice.
I've heard of tyre chains for disk brake bikes but have never seen them.
Another valid solution is to change your route over winter - could be that the road is a bad place to be, so take a back-road or a trail/track. Going out of your way for a longer route is its own reward :) 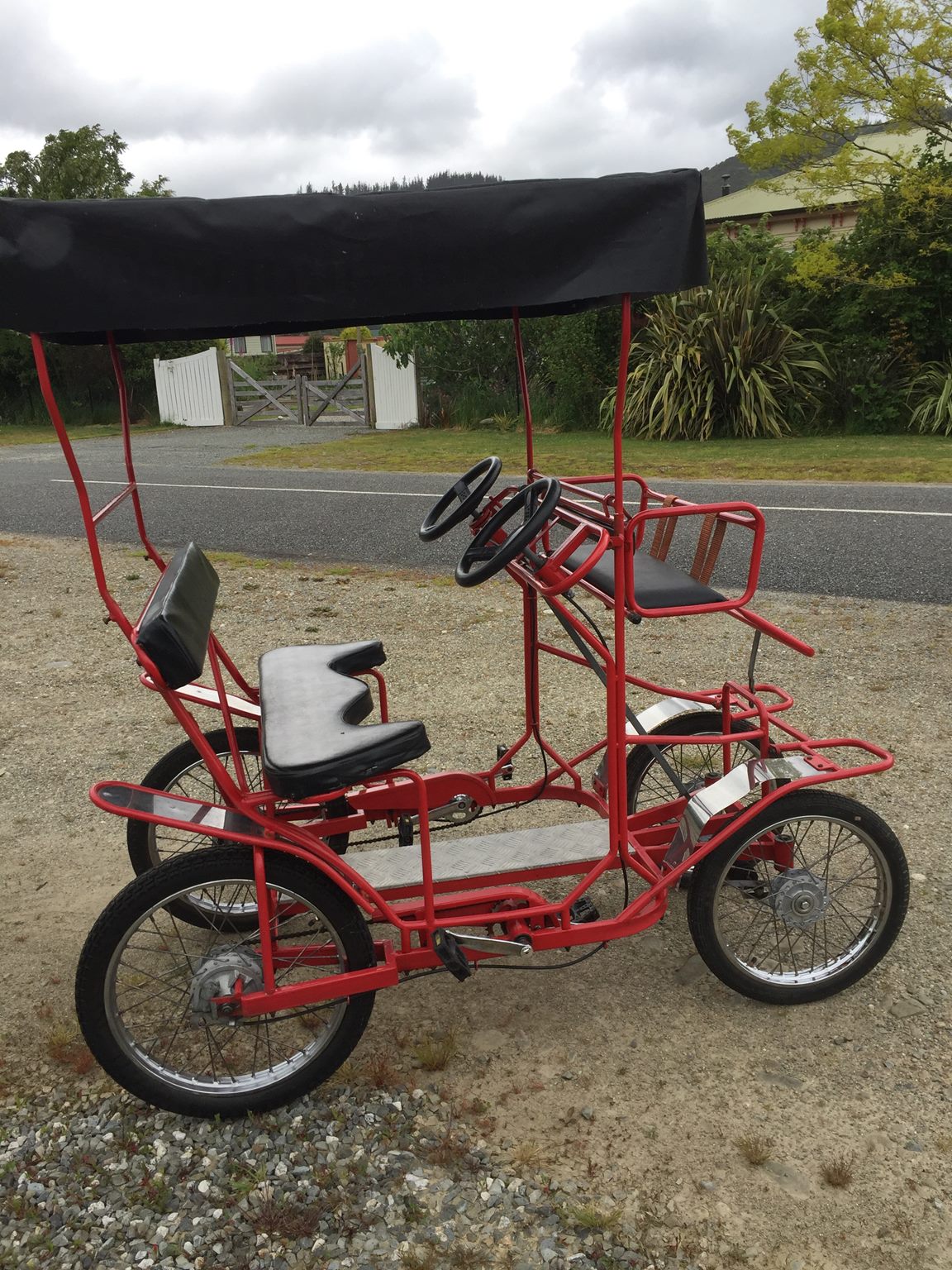 from this listing and it costs quite a bit more than I've ever spent on a bike.

In addition to all the other answers: A trike or quad won’t fall over on slippery surfaces, but you can still lose traction causing you to crash or go off the road.

Unless you are going very slowly your forward speed is much more dangerous than the meter or so your center of gravity is above the ground. The mere act of falling off the bike is relatively harmless, unless you have bad luck or low bone density.

Look into the winter road below (image credit), similar (little worse) than that I need to deal with:

A bicycle with wide, knobbed MTB tires can take the car spur on the right. It is not a very nice ride but it would work on lower gear. In my case, my electric engine will help me to pull through if not too far. But a tricycle would need to dig a thick snow right between the spurs. A quadricycle would have a problem that the left spur is much less developed than the right spur. To span over the thicker layer of snow between the spurs, both also need additional ground clearance. So you need a well cleaned winter road for using such a "bicycles".

The problem you describe can be easier addressed via using appropriate tires: wide knobbed MTB tires (mines are 2.35") hold on the road well just on snow, and studded tires should be used when there is a notable amount of ice on the road.

They exist. And no, you won't fall to your death. Chances are simply very slim. 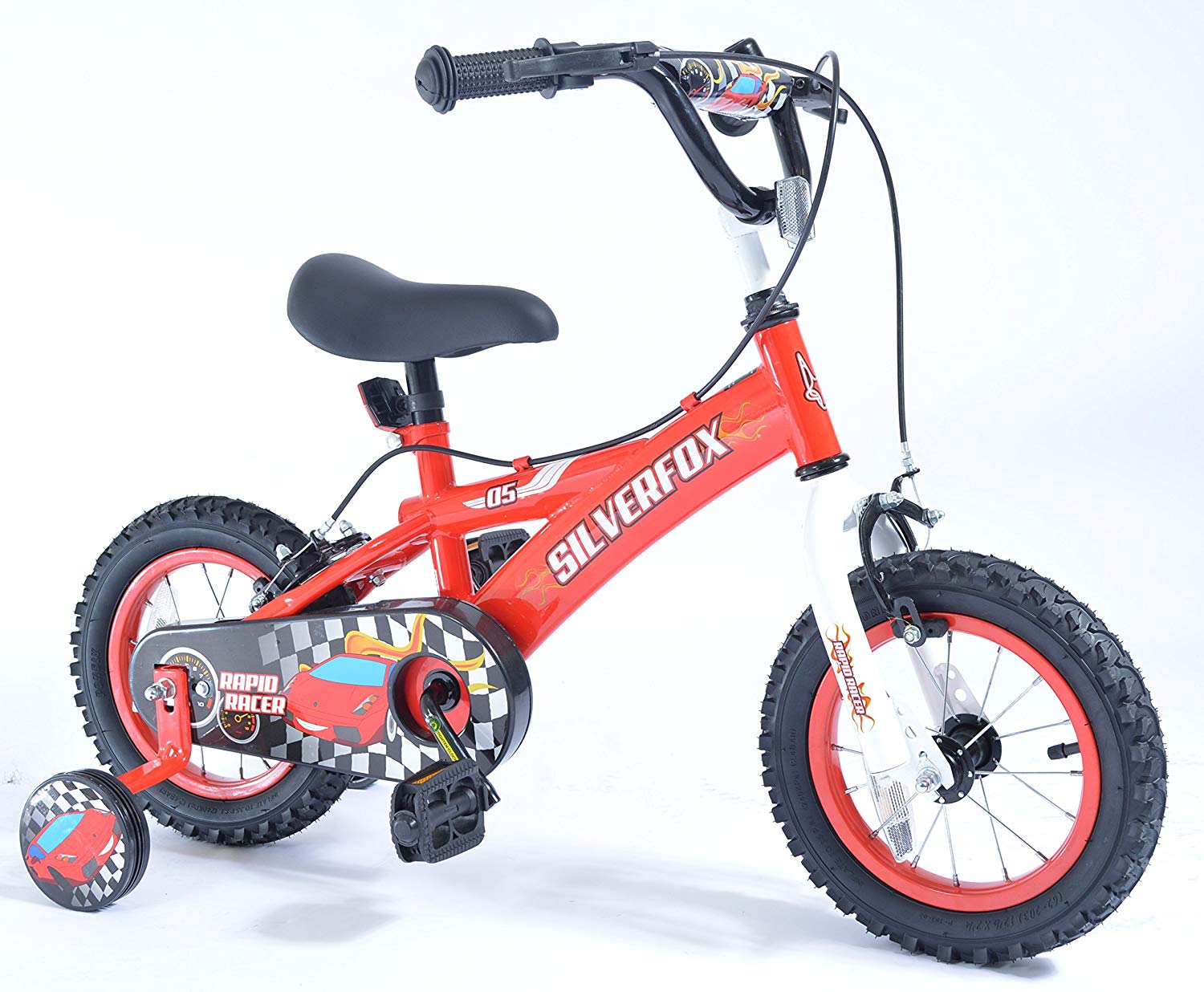 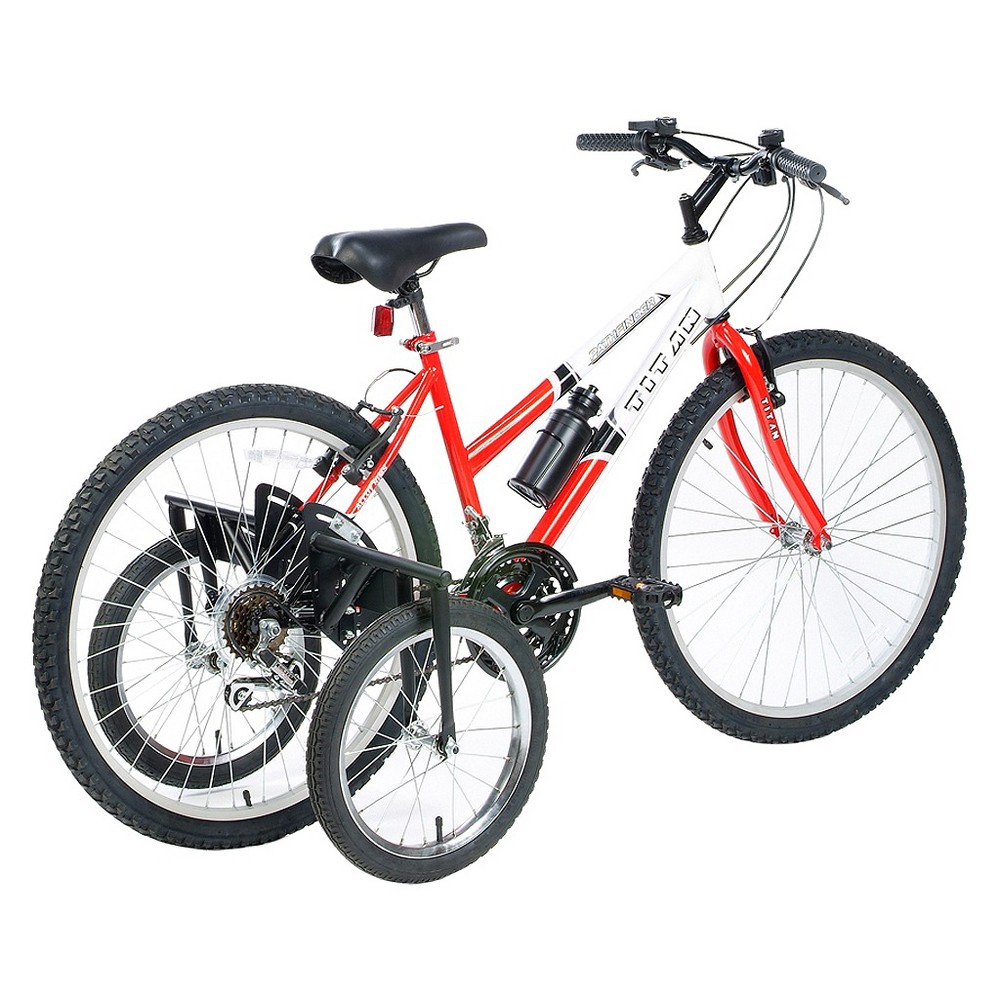 There is a Velomobile on 4 wheels.
The QuattroVelo.
And it can come with a child seat in the back.

I have heard about two seater velomobiles which have the second person behind the first but could only find pictures and websites with them side by side, making quite a big item which will likely not fit on the bike infrastructure where you live.

As all the sites and videos I could find so far are basically selling sites I do not give links, but an online search should find them for you.

For those who wonder, velomobiles are cycles, most do not have an e-assist build in. But they are expensive, hardly found second hand (outside the Netherlands and Germany) and even then still not cheap.

Local laws usually don't allow 4 wheel vehicles to be classified as bicycles, so that is the main reason you don't see them except at the beach and as rentals in larger parks. Equipping them for the road would require a windshield, safety equipment- on and on until it is too expensive to buy for use on the street.

While other answers have pointed out some 4-wheel "bikes", TrikExplor make an off-road quad recumbent which can even be 4 wheel drive and have electric assistance.

Stick some fat studded tyres on that and it will be very capable indeed.

Parking won't be easy and I suspect the cost is bank-breaking given that they're built to order.

Many have noted that tadpole (2 in front, one in back) trikes are widely available (and are the most popular recumbents being sold these days by far). But something to consider for potential winter riding is that if the rear wheel loses traction (ice, rumble strips, or chunky ice), it can immediately send the vehicle into a spin as the back end tries to make its way forward, as the center of mass will.

Can be life threatening:

Not the answer you're looking for? Browse other questions tagged tire wheels safety winter theoretical or ask your own question.

33
Why do we rarely see recumbents and almost never see velomobiles?

2
On which weather conditions should I choose my bicycle with studded/spike tyres?
1
Can and should I sell a bike without wheels?
3
Seating issues with plastic wheels
8
Why are 36-spoke wheels a touring thing?
13
Why are almost all bicycle tyres cross-ply/bias ply and not radial construction?
0
Why aren't winter bicycles camping events common as the motorcycles one?
4
What's the deal with 135mm O.L.D. road bike wheels?
9
Why bother maintaining a road bike for summer and a mountain bike for winter rather than two complete sets of wheels (as with cars) on a cyclocross?
2
How to straighten wheels on unbalanced forks dropout with quick release?
15
Why do modern bikes generally have two identically sized wheels?