No, not asking about creaking :) On my gravel bike with Campagnolo Ekar (press-fit BB) after removing the chain from the chainring, when spinning the cranks they spin only for a few seconds (I heard that means the bearings are correctly greased) and I hear a faint, steady "rattling" noise. It sounds almost like an internal gear hub when running or a dry chain. Here is a short video demonstrating the noise (disregard the husband whistling in the backround). The video exaggerates the noise somewhat, it's almost impossible to hear with the chain installed, as it is drowned out be the regular drivetrain noise. However, in comparison, the square-taper BB on my other bike is completely silent without the chain.

Is this normal? Should I take it apart to see what's going on? This was immediately after a ride in the cold (around 0 °C), could it be possible that the BB shell contracts due to the temperature and compresses the bearings?

The bike was bought last summer, and I rode it for about 1000km in all weather (with mudguards in winter), including snow & road-salt, rain, and on various dirt tracks. I never used a pressure washer or garden hose to clean it, only a shower with low pressure. I didn't do any crazy jumps, only a few high-speed downhill bunnyhops over potholes.

I removed the crankset. The bearings don't spin freely at all, particularly the drive-side one requires some force to turn. Turning the bearings I feel some distinct "latching", like turning a rotary encoder button on some electronic gadget, or like turning the axle of a dynamo hub (but much weaker). The "latch points" occur in regular intervals (a few degrees), so I don't think dirt is the cause. In contrast, e.g. the axles of the wheels turn completely smoothly inside the hub (but don't spin freely either). I don't think this is normal for the bearings? Can pitting be the problem?

To my untrained eyes, the bearings look OK: 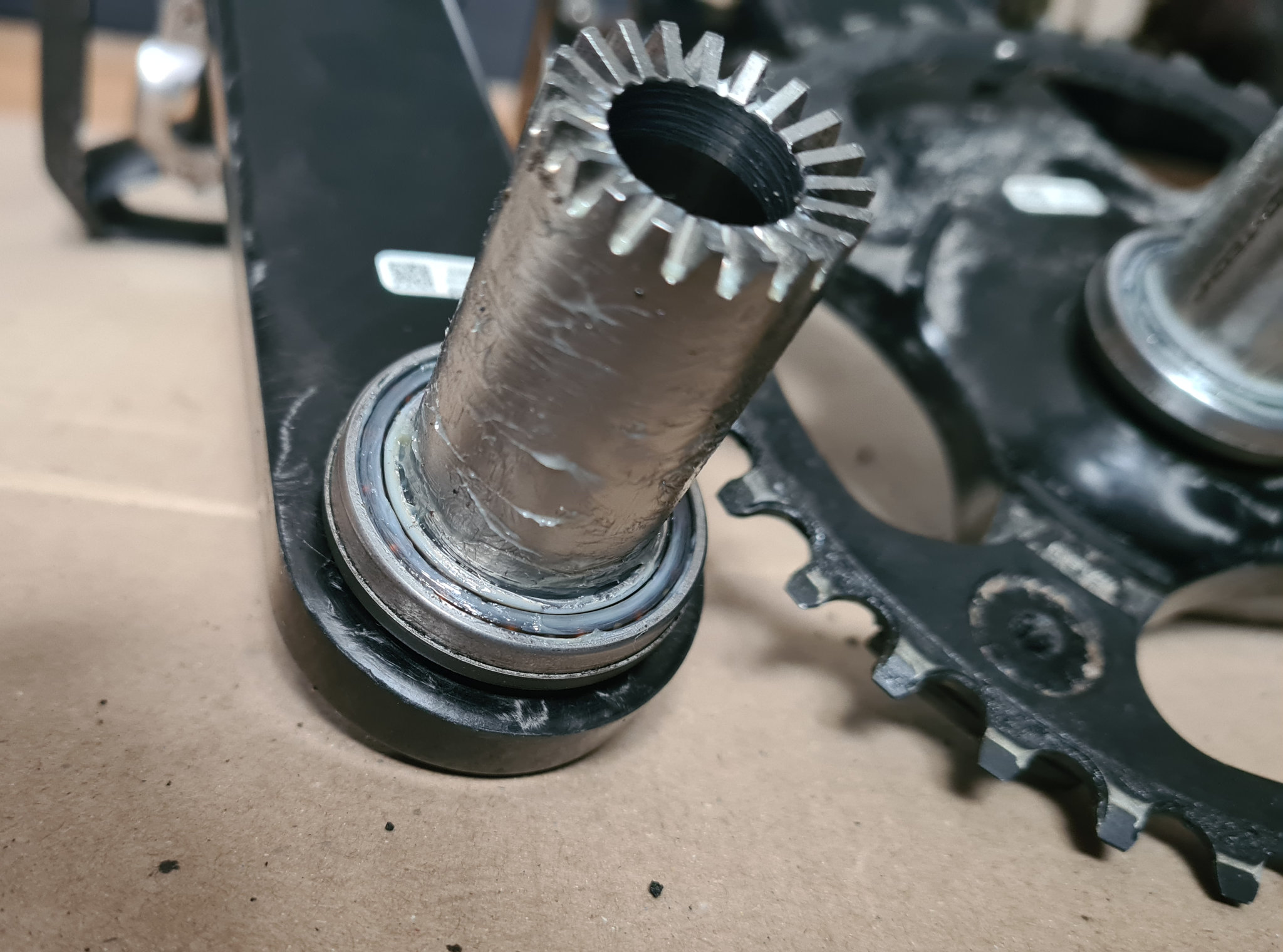 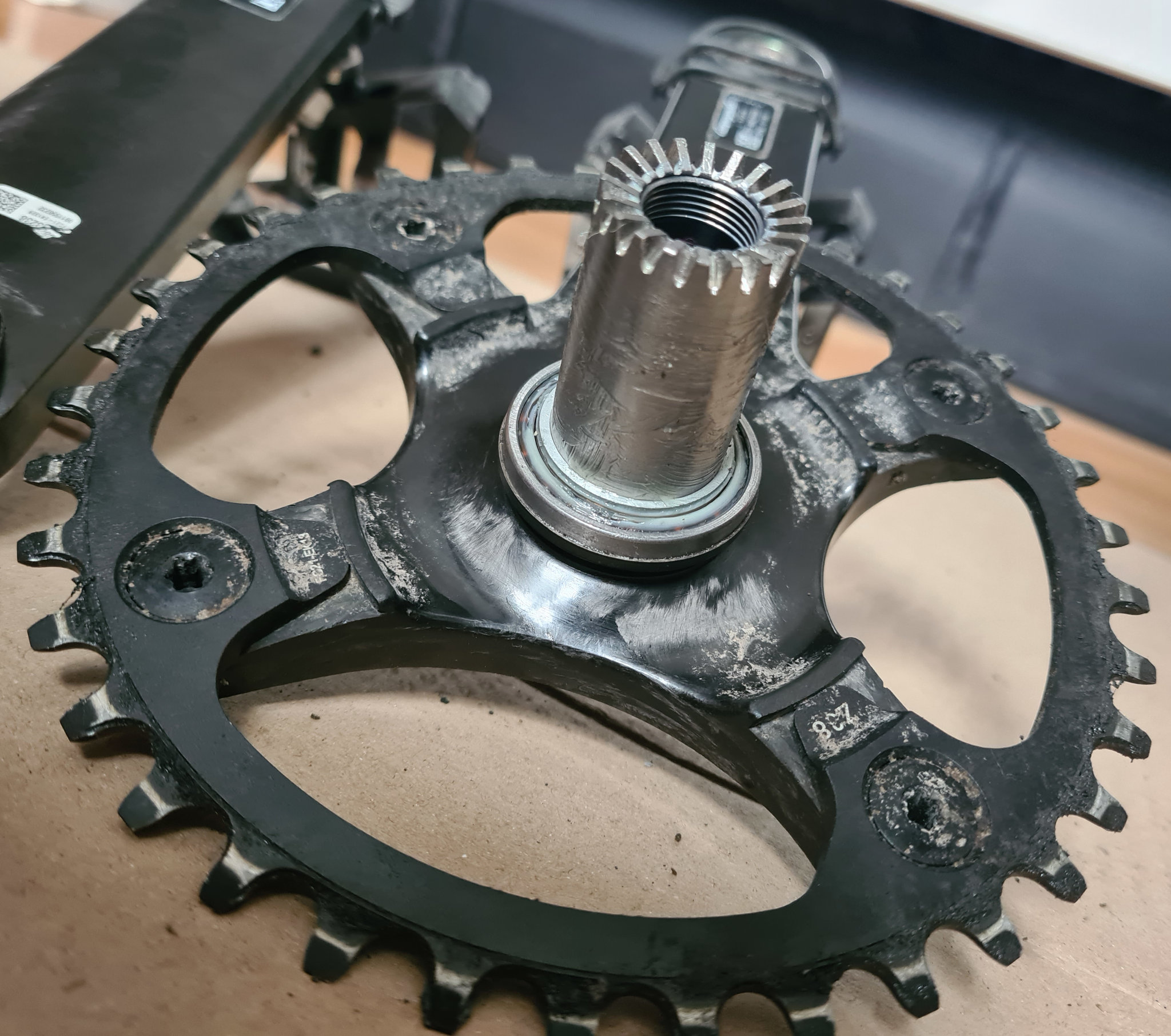 The BB cups are clean as well: 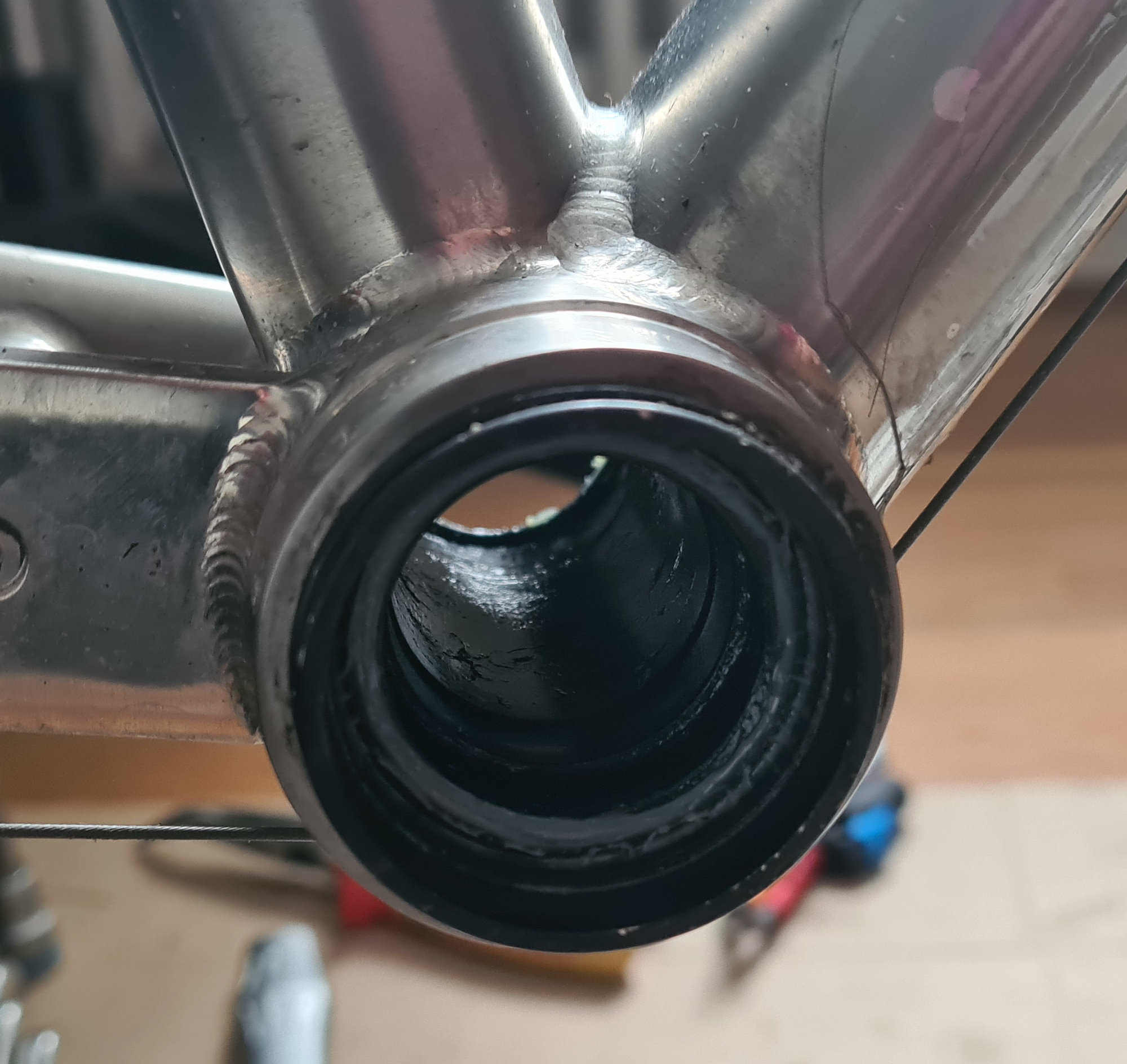 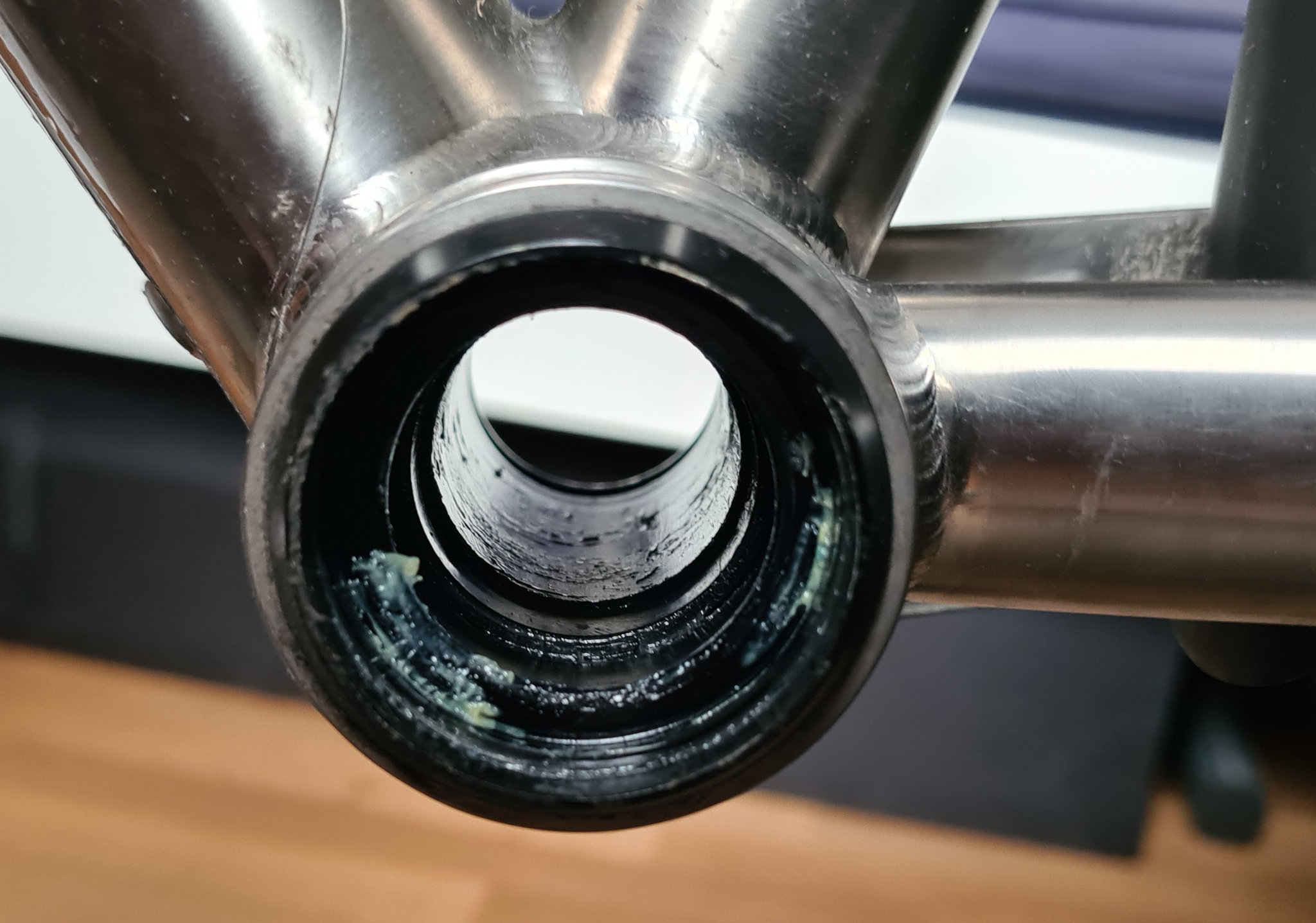 I contacted the manufacturer. They suspect the BB cups were not pressed-in correctly and are out of alignment, which in turn damaged the bearings. I will have the BB cups pressed in again to re-align them, and the manufacturer will have Campagnolo replace the bearings. If the problem re-appears after the next 1000km, the frame might get warrantied. However, they also confirmed that Ekar cranks always only spin for a few seconds because of the seal, so that part is normal.

The question was updated to include:

The bearings don't spin freely at all, particularly the drive-side one requires some force to turn. Turning the bearings I feel some distinct "latching", like turning a rotary encoder button on some electronic gadget, or like turning the axle of a dynamo hub (but much weaker). The "latch points" occur in regular intervals (a few degrees), so I don't think dirt is the cause. In contrast, e.g. the axles of the wheels turn completely smoothly inside the hub (but don't spin freely either). I don't think this is normal for the bearings? Can pitting be the problem?

When you rotate the axle or the bearing race, if it feels gritty, that usually indicates wear or contamination. For what the OP now describes, I believe the usual English term is that the bearing feels notchy or that it is binding. That can be caused by the cup or Bb shell being out of round, so that the bearing is compressed at some points in the rotation. In systems with preload, e.g. headsets and cup and cone hubs, if you tightened the system too much, I think it would also feel notchy.

Right now, without being able to examine the whole system, I’d guess that the bearing is the issue. In general, when you press bearing cups into a frame, you need to make sure that they go in straight. You also don't want to hit either of the races too hard. This is why we would use bearing presses and drifts - it is definitely possible to just use a block of wood and a hammer, but you do run an elevated risk of damaging the bearing. It is possible that somehow, at the factory, the bearing wasn't properly installed onto the crank half spindle, and it got damaged that way. This would be atypical of any high-end product, but any industrial process will produce some bad units, and quality control will catch most of them but eventually, something has to slip through the cracks. Your frame could possibly also be out of tolerance (e.g. that side of the BB shell isn't round or parallel to the other). Now that you've removed the crankset, I'd normally expect the bearing to turn normally. However, given the length of use, it's possible that this was the issue and that the bearing is now damaged. Unless you have the appropriate frame tools, checking that the BB is correctly faced and round is probably a shop endeavor.

Given the stated symptoms, I would get a bike store’s help to diagnose the issue, preferably one where the mechanics have at least some Campagnolo experience. If you bought the group online, the store who sold it might have some ideas on what could have gone wrong, although their insight will be limited by not being able to see the system in person. The same is probably true of your country’s Campagnolo distributor.

I do not think this is normal. Most likely, the bearings are dead and the bottom bracket needs replacing. Unfortunately, with press fit BBs this is mostly a task for a bike shop.

Normally, the bottom brackets are not serviceable even if they use some standard industrial bearings inside.

The reasons for the failure may be numerous, but I agree that 1000 km is quite little. It may be some manufacturing defect, it may be that the seals got damaged and let some dirt to get inside.

You may try to dismount the cranks and try turning the individual BB cups to find out if you feel any grinding.

reaction to the update:

Ultimately, if it bearings are dead inside, it does not really mater how exactly. Well, it only matters for the warranty, whether you are entitled for a free repair or not. But other than that it is just a bearing that needs replacing. It may be some sand in it or something made of metal disintegrated to some degree.

I'm not totally sure that the bearings are indeed broken and aren't supposed to behave this way... And it would be good to what, if anything, I did wrong and how to prevent this from happening!

They really should spin freely. But no-one can say what went wrong without examining the inside.

Not the answer you're looking for? Browse other questions tagged bottom-bracket noise campagnolo or ask your own question.