Ask Question
Asked 3 months ago
Modified 3 months ago
Viewed 86 times
2
Closed. This question needs details or clarity. It is not currently accepting answers.

I was working on a 10 speed bike yesterday. It needed a new drivechain, so having purchased a Shimano Tiara CS-HG500 11-32T cassette and a SRAM PC1051 10 Speed chain, I tried to set up accurate rear derailleur shifting, using the customer’s existing 10 speed flat bar shifters - Shimano SL-R770.

I noticed the rear derailleur Shimano Altus RD-M2000 (which I later discovered was a 9 speed part) looked newer than the other components but thought nothing of it. I attempted to adjust the indexing correctly, but shifting was poor. I checked the mechanic hanger alignment - perfect. After observing the rear derailleur’ s difficulty to shift in several cassette cogs and in different chainring combinations, I decided to remove the RD and try my 9 speed Shimano XT RD-M570. The indexing worked perfectly!. So what was the root cause of this shifting problem? I had to find a solution and quickly.

I then noticed the plates on the Altus RD-M2000 were slightly bent. I called the customer to tell him I would have to buy a new derailleur too and as a 10 speed Shimano RD-4700 GS was available locally, I bought it, fully expecting an easy journey from then on. Wrong!! I had assumed that a Shimano 10 speed shifter and a 10 speed rear derailleur would be compatible. Only after fitting the new RD did I begin to get really confused as the gear indexing was even worse than with the bent shifter!

So I called the LBS and spoke to their mechanic. He told me that the RD-4700 was probably incompatible with the existing 10 speed shifters and after consulting a Shimano chart? called back to say that the only shifter that would work for this drivechain was a Shimano 105 RD-5701 GS.

So somewhat relieved, I refitted my spare/test 9 speed RD-M570 and ordered the new part. The customer had a ride booked on the weekend, so I decided to loan him my rear 9 speed mech, which was still shifting sweetly in all chainrings and all cogs.

Having been a fan of Sheldon Brown for a few years, I had often referred to his encyclopaedic knowledge of all things bicycle, but on this occasion I found an insightful technical article on Bicycles.stackexchange.com hence the reason I have now joined :-)

I had found the article What is the cable pull of Tiagra 4700 10 speed? What is the actuation ratio? , which confirmed there were known Shimano incompatibilities affecting the shift-indexing pull-ratio.

As a bicycle mechanic, I am humble when it comes to what I don’t yet know, so continuously learn to improve my own knowledge, but on this occasion I was completely ignorant of the RD-4700 (& possibly?) RD-2000 actuation ratio’s which were affecting perfect Shimano 10 speed compatibility with the SL-R770 right hand shifter.

Today I will return the new derailleur for a re-stock and hope to discover a reference URL to a (previously unknown) Shimano compatibility database. If I find something useful I will report back so watch this space! Your thoughts/comments would be welcome? 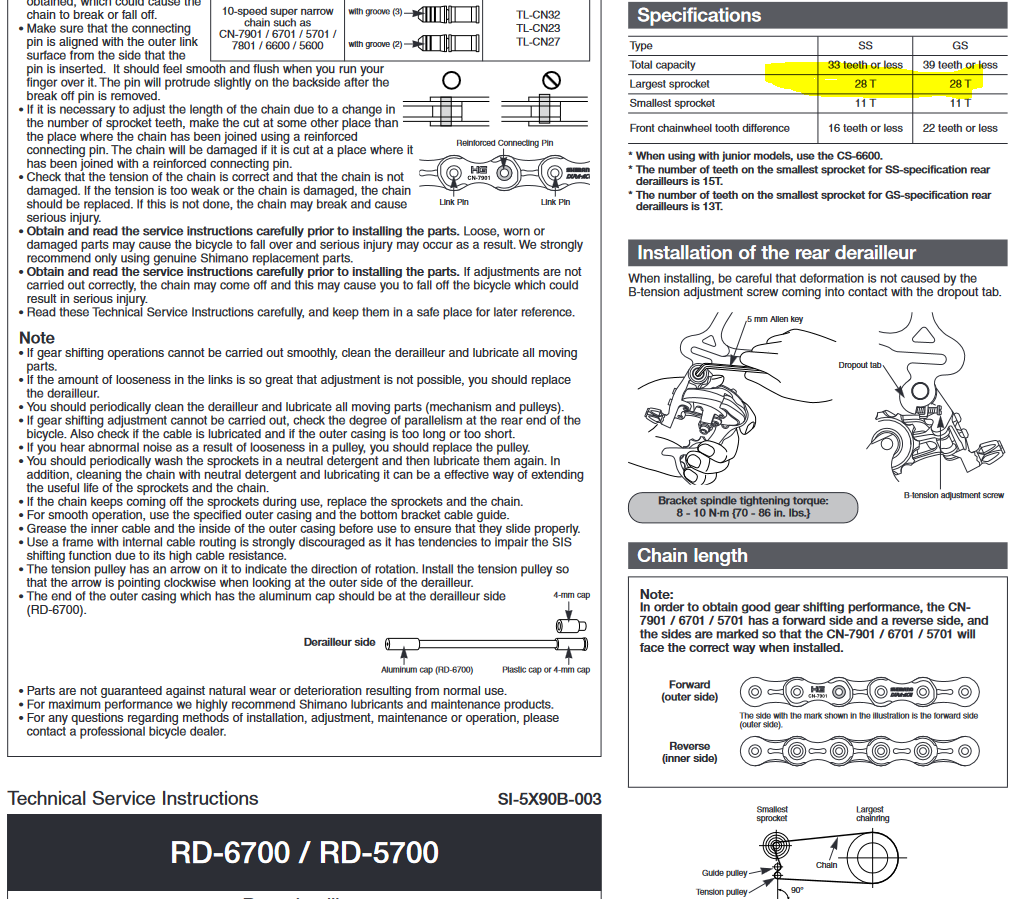 You might be able to hack it to do so with the an inverted or longer b-screw, but it will be hacky and not necessarily what you want to give someone else. The plan of using a higher end, nominally 9-speed mountain RD is the better solution for running a 32 or 34 on a bike with a pre-4700 10 speed shifter, because the actuation ratio is the same (sometimes known as 1.7) and the precision/tolerances are there to make it work well. There are no Shimano road 10 rear derailleurs that use this actuation ratio that do what you need natively. RD-4600 is the closest it came, and that's still only 30t.

You will probably be able to find numerous reports on the internet of people making a 32 work with RD-5700/6700/7900. It's the kind of thing where what goes unreported is there's intermittent grinding in the lowest gear, the shifting is basically bad, or there was another group who it didn't work for.

RD-M2000 is a derailleur that has the actuation ratio you need here, but it's low-quality to begin with. Add some damage and wear, and it will be easy to have it not work well. It's a good idea to go straight to XT when you do this kind of setup. RD-M772 is the one they've made as a repair part for years after the end of the rest of its group.

Not the answer you're looking for? Browse other questions tagged shimano derailleur compatibility tiagra or ask your own question.

2
Deore Derailleur w/ Tiagra STI Shifter Compatibility
2
Shimano Tiagra 4700 10 speed lever only shifting 9 gears
3
Compatibility of Tiagra 4700 shifter with MTB front derailleur
0
Is it possible to upgrade a rear derailleur with an other model, same company Shimano and the same speed
5
What is the cable pull of Tiagra 4700 10 speed? What is the actuation ratio?
3
Can I use Shimano 105 rear derailleur from 11-speed bike with 10-speed Tiagra shifters?
1
What issues will I have when combining a RD-4700-GS SHIMANO TIAGRA (Rear Derailleur,Medium Cage,10-spd) with a SHIMANO DEORE 10-Spd, 11-36T Cassette?
0
Upgrading broken Shimano Claris derailleur with Shimano Tiagra (Kona Rove AL 650 2021)
1
3x7 Shimano/SRAM compatibility